60 Xtylos were deployed for the 62nd Grammy Awards wich is now the first major broadcast event to use a large complement of Claypaky Xtylos fixtures. The Lighting design is signed Bob Dickinson and Noah Mitz from Full Flood Inc. and enlighted the Blake Shelton and Gwen Stefani’s duet, “Nobody But You.”
In addition, 118 Claypaky Mythos 2 fixtures took part of the main set rig and the dish stage at the Staples Center in Los Angeles. PRG is the lighting vendor for the show. 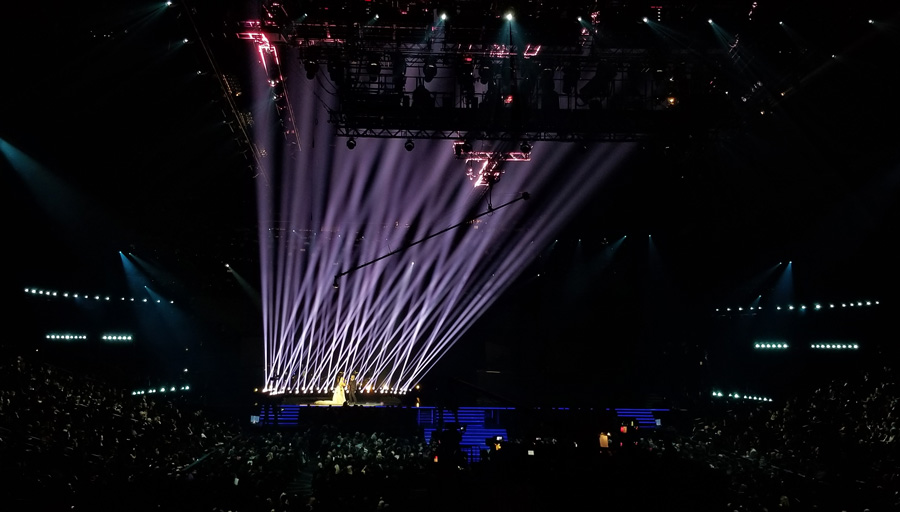 The show’s Creative Producer Raj Kapoor requested to the lighting designers for a lighting installation that could separate Shelton and Stefani from the band and wrap up them as they performed the romantic ballad.
“Raj was looking for lighting as architecture to surround the duo,” explain Mitz. “We first thought of Mythos 2, but when we realized Xtylos would be available we made the switch.”
He noticed that Xtylos was on the LDs’ radar since last summer. “We were impressed by their color rendering, color intensity and the tightness of the beams. We were looking for an opportunity to use them.”

Lighting Director Madigan Stehly thought of a series of custom carts for the Xtylos, the first moving head light with a laser light source. The Xtylos formed a pencil-beam cage of architectural positions between the duet’s verse and choruses beginning with a lacy lattice look and switching to a straight aligned grid.
“The carts aligned the fixtures in a perfect grid, covered the joins and made everything accurate and repeatable. Xtylos was a perfect match for that performance; they delivered on the creative beam look we were going for,” said Mitz. 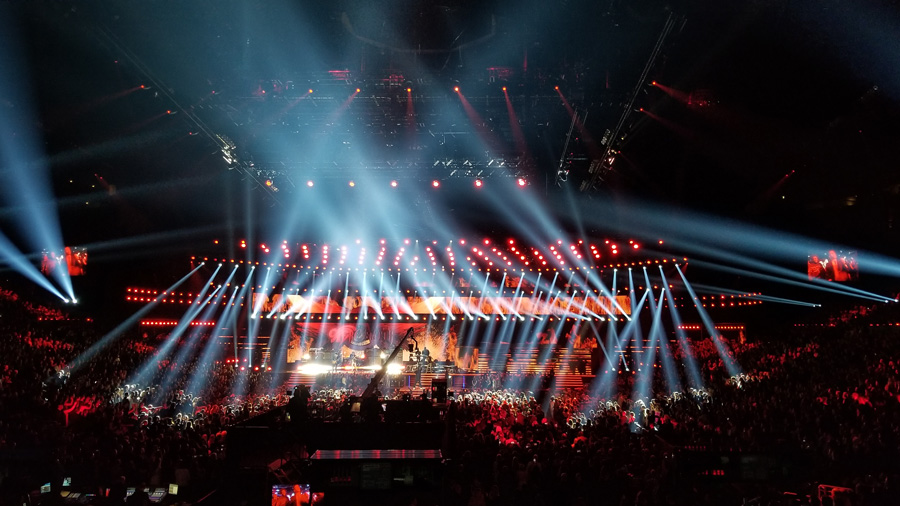 Lighting Director Patrick Boozer encoded the Xtylos for the performance. “I am always cautious when programming a brand-new fixture for a live broadcast show, but the Xtylos worked perfectly out of the box and Claypaky support was with us 100 percent throughout the project,” he explain. “Having used them once, we can’t wait to put a large quantity of the Xtylos through their paces in a big, upbeat performance on a future project,” add Mitz.

The LDs enlisted 110 Mythos 2s for the main lighting rig where they were arrayed in ribbons above the LED videowall; they were used in multiple performances, including the collaboration between Aerosmith and Run DMC. Lighting Director Andy O’Reilly encoded the fixtures.

Furthermore, eight Mythos 2s were installed into the circular perimeter of the dish stage in the middle of the audience, which welcomed Alicia Keys and a tribute to Nipsey Hussle. The fixtures were put under glass and were revealed as needed by circular pieces of flooring material that covered the glass. “The Mythos 2 served as a fully-functioning beam, color mixing, high-output spot in both the set rig and dish stage,” Mitz emphasize.

“It was an amazing experience to see this team create such a wonderful vision with the XTYLOS fixture,” said Ray Whitton, Western US Sales Manager for Claypaky. “The Xtylos were the lighting eye candy of the evening and truly an eye opening segment.”