At ISE, Amadeus highlighted the version 1.5 of its Holophonix spatial sound processor, featuring many new functions, corrections, and improvements. The rewriting of his graphical interface, according to new Web technology standards, ensures optimal performances.

Unveiled in 2018 at the Frankfurt Prolight + Sound trade show, and commercially available since January 1st, 2019, the Holophonix spatial sound processor continues to be updated and enhanced, according to requests and needs expressed by its users.

Developed with several musical, theatrical and scientific institutions, the Holophonix processor was designed in a collaboration with the STMS (Sciences et Technologies de la Musique et du Son), a laboratory founded in 1995 and hosted by the Institut de Recherche et Coordination Acoustique / Musique and affiliating the CNRS, Sorbonne Université, the Ministère de la Culture, and IRCAM around an interdisciplinary research theme dealing with music and sound sciences, and technologies.

“We released about ten updates over the last 18 months, answering requests of our extremely proactive users, who never stop sending us feedback. The forthcoming 1.5 version is a more structural update.
It includes a complete overhaul of the graphical user interface (GUI) and a totally revised communication bridge between servers and applications, optimizing high-speed transmission of OSC messages.
Rewriting our graphical interface from the ground up, according to new Web technology standards, ensures optimal performances with today’s tools, with deep scalability and flexibility for the future,” says Johan Lescure, Holophonix Chief Technology Officer at Amadeus.

To cut a long story short, discover the new graphic interface in this short movie. The speakers are in grey, the seats are red and the objets fly and turn like Sputnik.

“In addition, a new application, Holophonix Updater, is now available. It allows the users to download updates themselves, to upgrade their station in perfect autonomy. Audio core performances have been optimized as well, and the user can still adapt the processor to its use, by choosing between CPU load and global latency (which can be as low as 1.90ms),” Johan Lescure specifies. 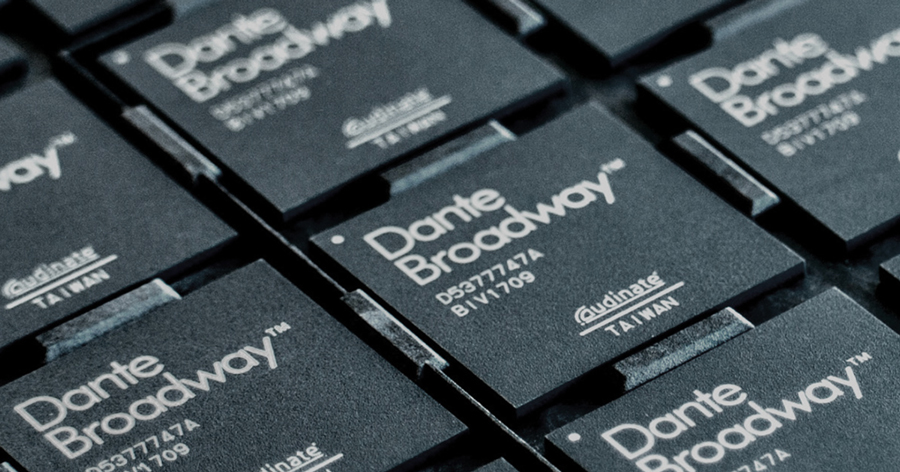 Version 1.5 includes new encoders and source formats developed by STMS, to ensure maximum compatibility with different Ambisonics capture tools. This new version also includes an equalizer, offering 5 PEQ plus high-pass filters, and low-pass filters. This equalizer is available for each virtual source and each physical (Dante) output, as well as spatialization buses, offering more versatility and features to the processor.

The processor already allows the processing of 1st order Ambisonics streams in A-Format and B-Format. It can thus process natively raw signals available directly at the output of Ambisonics microphones (A-Format) like Sennheiser AMBEO, SoundField ST250, ST450 or SPS200, RØDE NT-SF1, DPA-4 or Oktava MK-4012. It can also process a generic format source (B-Format) with parameters available to offer compatibility with various formats and standards (FMH, ACN, as well as normalizations FuMa, MaxN, and SN3D).

An offline editor software, Holophonix Designer, is also available, including a binaural pre-rendering function. This application, available on Windows and macOS platforms, will integrate all the graphical functionalities available inside the Holophonix processor, with a binaural rendering engine to ease project pre-production while listening on headphones.

The processor integrates new ‘MicTree’ virtual objects (or sources), to process a main ‘microphone tree’ more easily. A single ‘MicTree’ object can include 1 to 128 microphones. The ‘Mics’ window allows the user to define the real position of the microphones, and if appropriate, to automatically realign each cell, in time (delay) and in intensity (level). Any ‘MicTree’ source captures the integrality of the soundstage, without applying any specific processing to the signal. 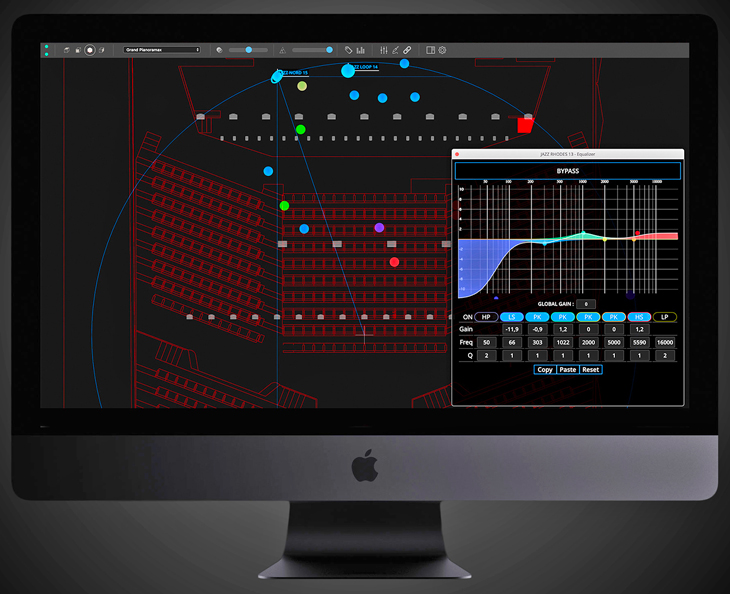 The equalizer, offering 5 PEQ plus high-pass filters, and low-pass filters is available for each virtual source, physical output and spatialization buses.

Also new for the 1.5 update, the Holophonix processor is now equipped with a new decoder, called LBAP (Layer-Base Amplitude Panning). LBAP is an amplitude panning algorithm, optimized for tridimensional setups based on several layers (with a different number of speakers for each).

This algorithm works by selecting a speaker pair on each of the layers surrounding the source, applying an amplitude panning on each pair, then completing a level ponderation between the two layers. It ensures better results than VBAP (Vector-Base Amplitude Panning) for cube-shaped configurations.

“Finally, Holophonix integrates the first software features leading towards using the processor (and thus, possibly, mixing) in Virtual Reality. The processor is already compatible with the Oculus Quest headset, to more easily manipulate sources from a virtual and tridimensional room.
Our users are looking for solutions to control and move sources via new interfaces and/or tools, more natural and more universal than traditional 2D-control surfaces. This innovative ‘VR’ approach in the Holophonix 1.5 update is a first part of the answer, which we will develop and extend,” concludes Johan Lescure.

– Adds a function for the position icon. Clicking on it switches between AED or XYZ positioning
– Adds a lock distance to 1-meter from the center
– Adds a new hover color within the routing page
– Adds a no computing VU-meters function when not visible, for CPU saving
– Adds a scaling per source
– Adds help functions only when venue 3D is activated
– Adds selection from mixer
– Adds spotlights to the 3D venue for a nicer visual effect
– Adds Virtual-Reality (VR) support, for Oculus Quest
– Changes from .OBJ extension files, to .GLB extension files for better compatibility with web browsers.
– Changes from Command key to Ctrl key to rotate the 3D venue
– Disabling slave option on A-Format, B-Format, Zylia, MicTree and EigenMike sources
– Fixes a label layering order issue in 3D visualization mode
– Fixes a reverb issue in the bus parameter edit section
– Fixes an edit name issue for sound elements
– Fixes an issue in color editing
– Improves changing the view center (for zoom and rotate) by double clicking
– Improves GUI stability Full rewrite of the code