This August saw a magnificent production of The Flying Dutchman, Richard Wagner’s fifth masterpiece, brought to Lithuanian opera fans for the very first time.
Staged in a unique open-air setting by the Klaipėda State Musical Theatre and featuring leading Lithuanian soloists including Sandra Janušaitė, the event became one of the most celebrated musical productions of the year, selling out all of its socially distanced 1,000 seats to lucky spectators. 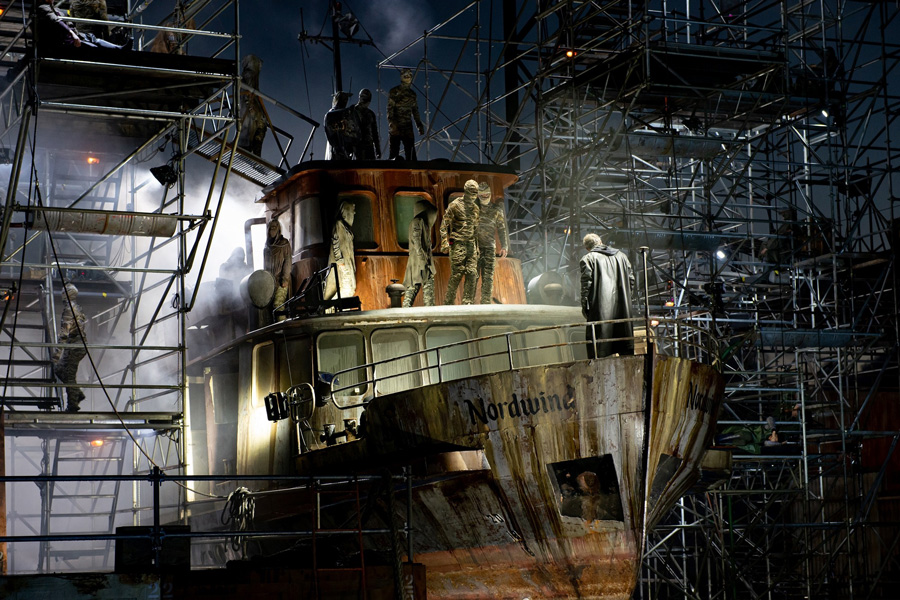 Dual DiGiCo SD12 96-channel consoles with two SD-Racks and D2-Racks were selected by one of the largest audio rental companies in the Baltics, NGR Service, to bring the magic of this one-act opera to life.

Fitting its original theme, the opera production took place on the slipway of Paul Willy Lindenau shipyard complex in Klaipėda, with its colossal structures and hoists, as well as frequently changing weather conditions, presenting the NGR team with some major challenges right from the start.
“The setting in the historic cruise ship terminal made for a unique and spectacular location, but it also meant dealing with rain and winds of up to 20 m/s whilst thinking of how to make the orchestra and soloists sound as natural as possible, as this would be staged in an acoustic concert hall,” reminisces NGR’s FOH Engineer, Tomas Ždanovičius.

“On top of the weather challenge, we also had to deal with constantly moving actors across a 50-metre stage, or even outside the stage at time, as well as special effects such as falling water and a real-life ship appearing during the performance. There were definitely one or two ‘firsts’ for us in this production.” 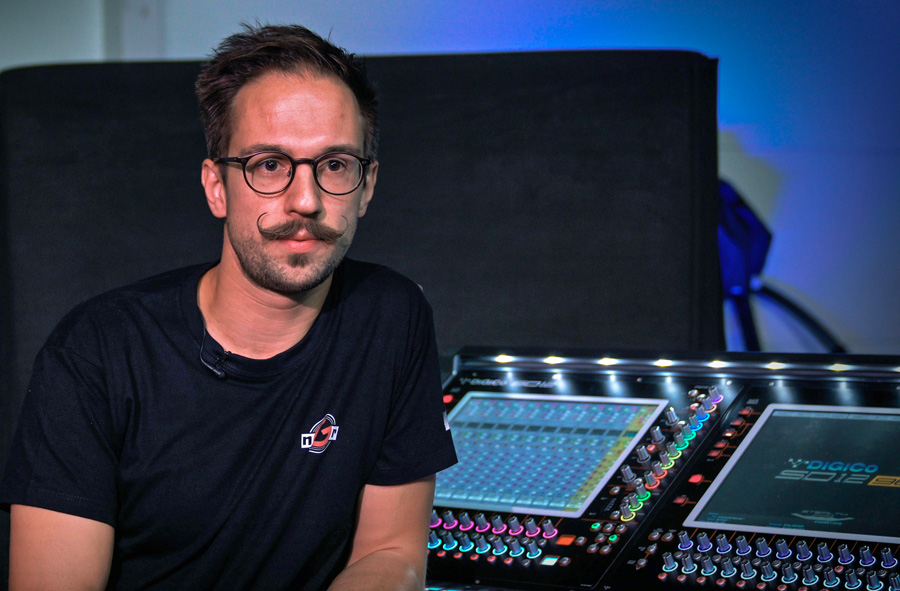 In order to deal with such a challenging odyssey, NGR chose the DiGiCo SD12 console, which offered their team the ease of operation, fast function selection, and “without doubt, the best sound of any console currently on the market,” adds Ždanovičius.
Deploying their best technical minds and top-quality sound equipment on the site allowed the team to fully realise the creative production ideas of Concept and Artistic Director, Dalius Abaris.

“When it came to sound, it seemed that everything was against the NGR team,” says Abaris. “On location, the sound engineers repeatedly analyzed and evaluated wind speeds as well as rigging positions of the sound system depending on where the audience would sit, which would sometimes change on a daily basis due to the latest COVID restrictions. One day we had one ground floor layout, the next day another.”

Impressed by the professionalism the NGR team showed in the face of such adversities, Abaris explains how the team worked relentlessly to ensure they could transmit every sound to each member of the audience.
“Another complexity was, of course, the stage size,” he adds. “This was a big challenge, not just for the sound team but also for the performers. When people are separated by over 40-metres distance, the monitoring systems visibility and relationship with the conductor all have to be watertight, so to speak, not to mention the main PA and the delay systems.” The « ground zero » orchestra and first floor choir and placed even further away.

NGR deployed two SD12 consoles, with the main one serving the soloists, orchestra, and special effects and submixer return groups; the other was used as a submixer for the choir’s 48 personal headsets. In total, between two consoles, 146 channels were utilized, not including FX returns.

“The scale of this production was just immense, and I didn’t hear a single artist saying that they felt uncomfortable singing, which is a major credit to the team’s abilities,” shares Abaris. “The installation of the sound equipment was a long process, as the team had to rig the system on an over-a-century-old shipyard construction.
They had to measure everything very precisely before putting up the three main PA clusters and the delay lines. The panning of the soloists was so accurate that the audience’s attention was focused on where the sound was coming from. It was definitely a feat to behold.”

The entire set-up included 70 wireless systems for the opera performers with omni-directional headsets, and a further 50 systems for the orchestra with clip-on lavalier mics and more. DiGiCo’s SD12 became invaluable when dealing with the soloists, who were in seven fixed positions across the stage, which was configured in ‘layers’ of around 50 metres in width. The ghost boat, the stage and singers quite everywhere. Wireless is your friend !

“This was all dealt with by having pre-programmed panoramas in different Snapshots, with manual pan movements as necessary,” explains Ždanovičius. “The audio material for the entire show was recorded in multitrack and having the ability to expand the console with DMI cards was very convenient.”

Speaking about the functions on the SD12 that were particularly useful in this complex production, Ždanovičius notes the importance of the ergonomics of the console, as well the easy accessibility of the worksurface, which helped him react fast.
“Additionally, it was useful to be able to arrange the layout of the console in any way needed, as well as having all necessary channels next to each other independently of the input list positions. Finally, having two separate touch sensitive screens made my work as fluid as it can ever be,” he adds. No way to mimic such extraordinary sky colors palette elsewhere than in the open air when and if the weather wants it.

Broadcast live on Lithuanian national television, LRT (Lietuvos radijas ir televizija), Wagner’s operatic feast passed with flying colours and was met with standing ovations by the fascinated audience.
“This was probably the first opera in Lithuania where there was no criticism from musicologists, critics or sound professionals certainly that I’m aware of so it was a complete success all the way,” states Abaris proudly.
“Working with the best orchestra and leading soloists of Lithuania requires the best sound quality, because everyone, from production directors to choir members, knows how the orchestra should sound,” concludes Ždanovičius.

“This is why DiGiCo consoles are chosen for these types of events, we can always trust the equipment. We particularly valued the system flexibility we gained with DMI cards: in this particular production, with the help of DMI cards and UB MADI we could split all the inputs to the OBVan, multitrack recording (main and backup), submixer and FX computer, which made the entire workflow seem like a serene ocean breeze amidst the storms and salvation of this magnificent production.”

Below, to watch the video of the story of the production: