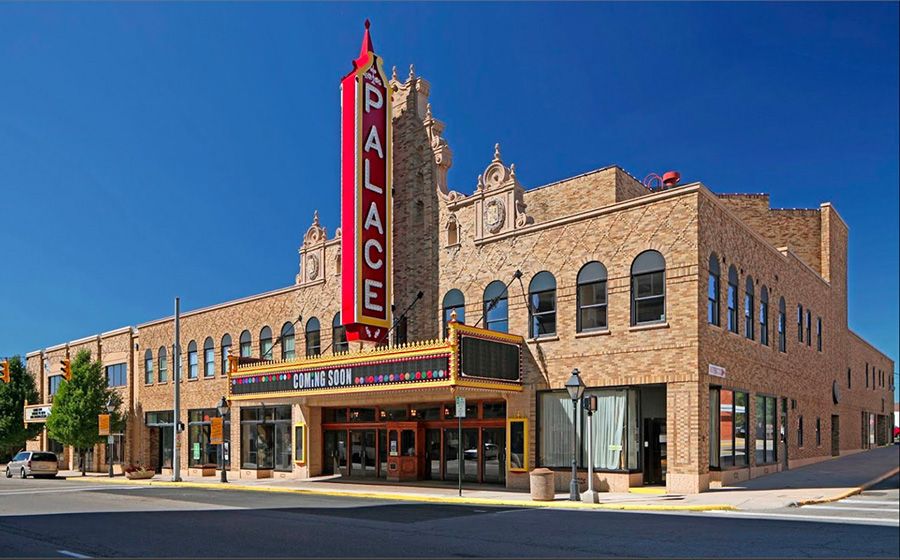 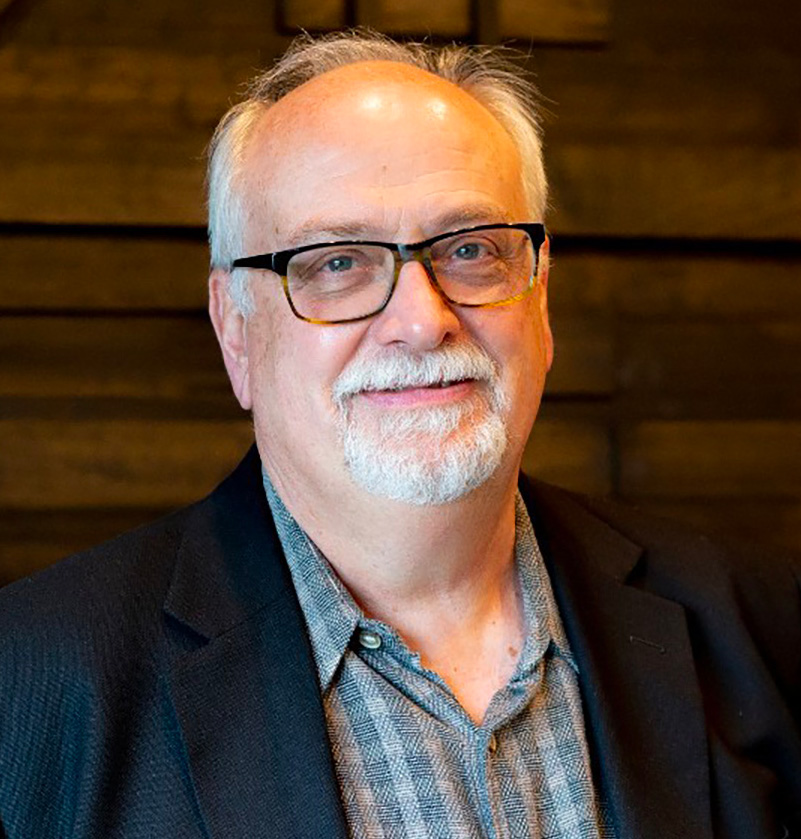 Constructed in 1928, the approximately 1500-seat theatre-style venue is a cornerstone for cultural activity in downtown Marion, Ohio; a decidedly multi-purpose facility that hosts a mix of concerts, theatre productions, films, and special events.

Designed by Architect John Eberson, the venue was constructed to give audiences the impression of attending a show at a ‘Palace in Old Spain’. As the Marion Star described it just before the Palace’s grand opening back in the day, “Allow your imagination to carry you to the gentle slope of a moon-lit Spanish hill…
Through the archways spreads the soft light of a harvest moon, and the dim glow casts shadows over the somber-coloured walls. Overhead, myriads of stars are twinkling in an azure blue sky, and soft, fleecy clouds are drifting gently with the breeze.” 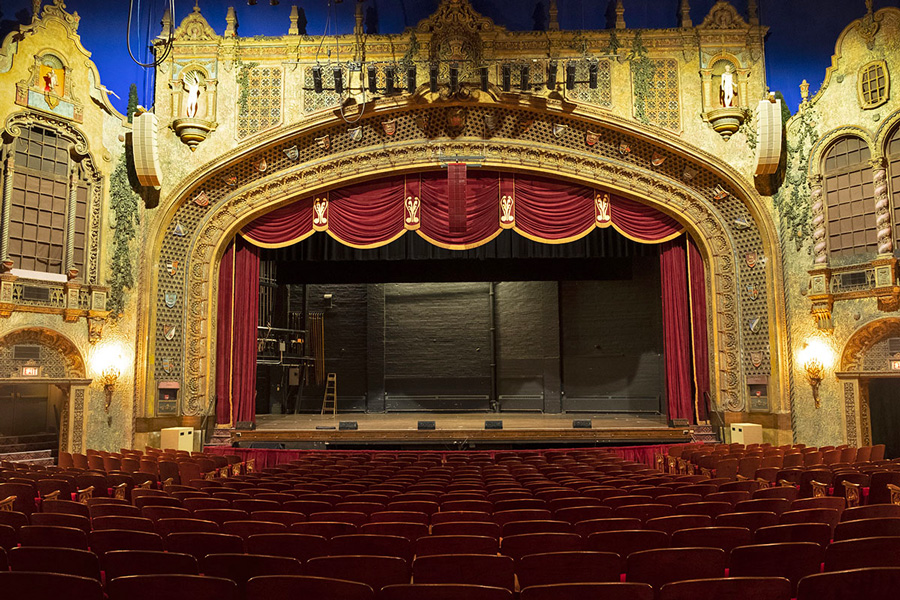 Over time, great care has been taken to ensure that the theatre’s setting remains as impactful as it’s ever been. After Marion Palace was acquired by the non-profit Palace Cultural Arts Association, it underwent a comprehensive restoration/renovation and has since been upgraded via a series of structural improvements and updates to the backstage and front-of-house areas. 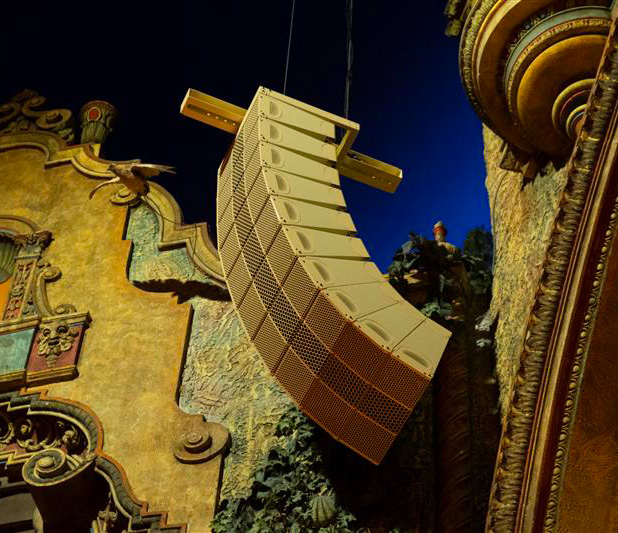 The stage right hang made of ten IS7.

Naturally, the Palace’s audio systems have evolved as physical changes to the venue were made. But, until the replacement of the venue’s previous 1980’s-era point source loudspeakers with the Adamson rig in January 2022, the systems inhabiting the space didn’t provide optimal coverage, output, or quality.

The new system is comprised of three arrays of Adamson IS7 in an LCR configuration, with two IS219 subs placed on the floor to either side of the orchestra pit, and eight Adamson Point 8 as under-balcony fill.

“We basically did a vocal tuning for the center cluster and a more ‘musical’ tuning for the left and right arrays,” George says. System tuning was done within the Lab Gruppen amplifiers driving the system (multiple D 120 amps for the LCR elements and one D 200 for the subs) and is “locked out” in the amps, George continues. 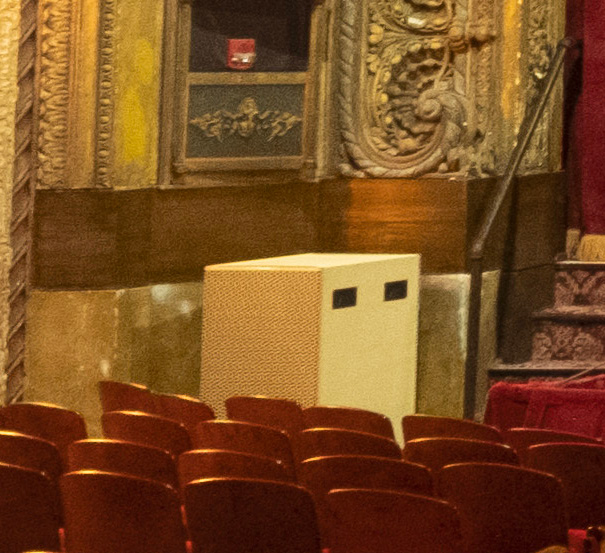 The stage right Sub IS219 laying vertically on the ground.

However, visiting engineers can put their own stamp on the sound via a pair of Lake LM44 processors at FOH and the venue’s pre-existing Yamaha GL5 console. The system was also reconfigured to be run on Dante.
“We go into the LM44s and then to the amplifiers (over Dante), and we have an interface there for visiting operators to drop in a visiting console,” George adds. 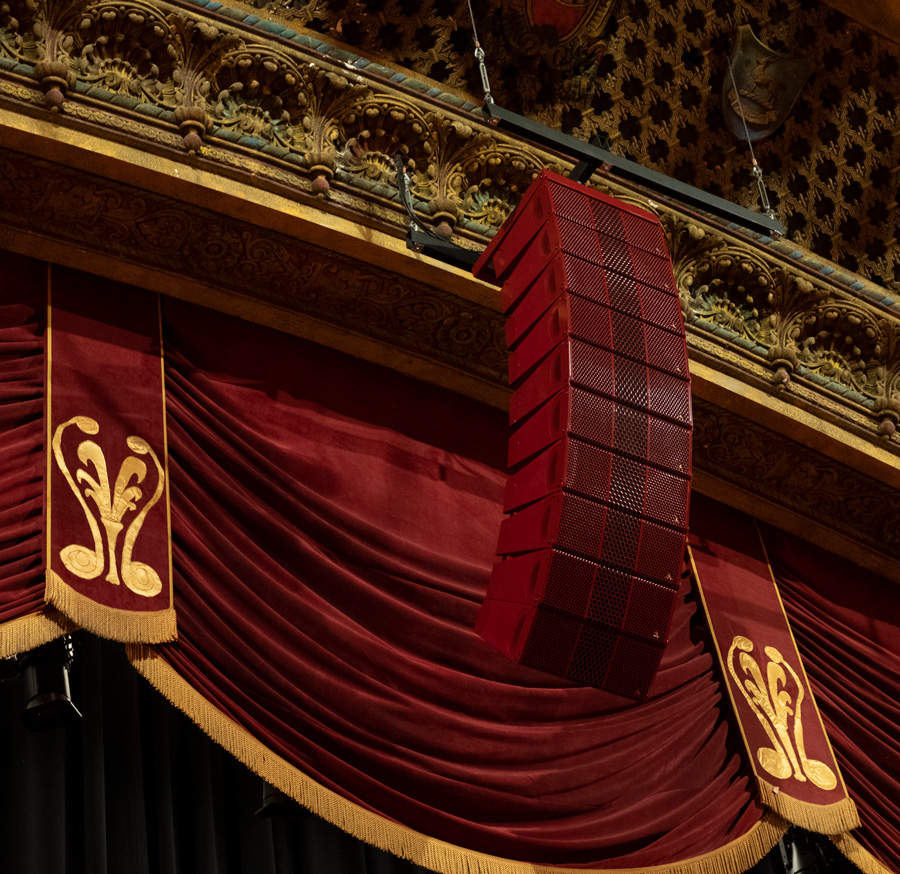 The central hang, perfectly matching the color of the curtains.

The size and weight of the loudspeakers were also beneficial. “The IS7 has such a compact footprint and being able to have a large enough array to cover the room and fit within the physical parameters, was a big part of the choice,” George notes.
“We’re also fortunate because they’re about the same weight as what we took down – the center cluster was actually lighter. So, we were able to reuse much of the existing rigging.”

Other longstanding issues were also addressed, among them, the replacement of a 70-Volt system that the under-balcony loudspeakers previously used with a low-impedance system. New cabling was also installed for the roughly 100-foot run from the stage to the balcony FOH mix position.

The result is an incredible improvement. “Far superior coverage of the venue and far better audio quality overall,” George says. But as much as those involved in the project wanted patrons to hear the difference it was important they didn’t see a difference.
Consequently, Adamson’s willingness and ability to provide custom colour matches (to blend with the Palace’s ‘courtyard’ walls to either side of the stage, and make the center cluster virtually disappear into the background of the rich, red velvet drapes framing the proscenium) was critical to that effort. 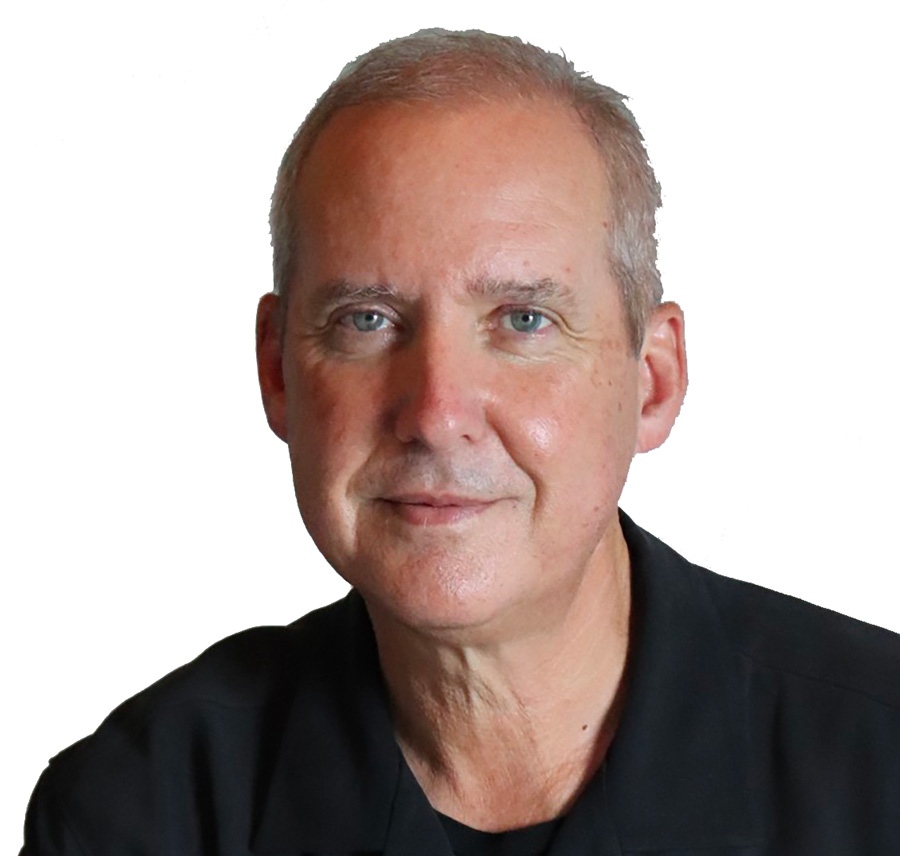 While selecting RAL numbers to match the colour and texture of thick velvet drapes was a challenge, it’s one Adamson’s Port Perry, Ontario facility is purpose-designed to meet. “We’re completely vertically integrated,” explains Adamson CEO, Marc Bertrand. “So, when matching RAL numbers, we’re able to control the end result seamlessly; from the machine shop and woodshop, all the way through wash, powder, and wet spray.

Because we’re not outsourcing the job and just waiting for product to come back, we can ensure the coverage is right, the metal is matched up properly, the powder matches the wet spray on the wood, and we can choose other colour elements for the silkscreen to make the match even closer.

You’re taking a risk if you outsource,” Bertrand continues. “We know immediately if something’s wrong. It’s about control. We punch our own metal as well, so we’re controlling not only the colour but the whole process.” While other manufacturers do custom colour matching, for Adamson, it’s a common occurrence. “This was the sixth custom job we’ve done in the past four months, although, I will say none of them were quite as pretty as that red.” 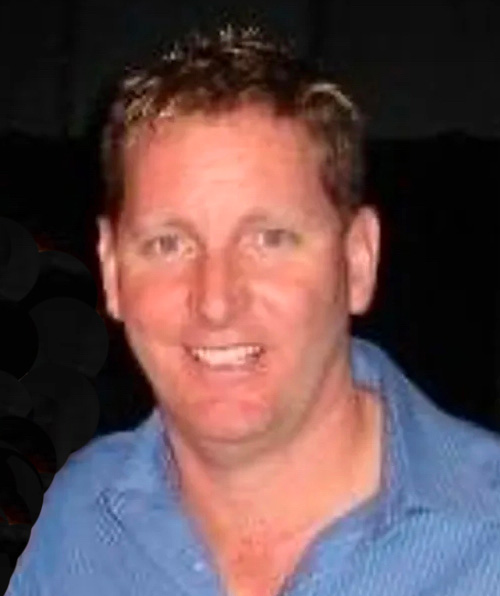 “Adamson matched the curtain colours without overshadowing the architecture of the proscenium, and the two side arrays also blend in very well,” says Kirk Detweiler, Marion Palace’s Executive Director. “We haven’t had a big show in since the system was put in, but for the movies, it’s sounding great, and we had a four-person vocal group in that sounded awesome.”

“As you can imagine, in any older theatre, the deep balcony, the multi-levels of coverage (present challenges),” Jester explains, “but the system Clair designed does everything it should and more. My only experience with Adamson is with some of their older boxes from the late 1990s/early 2000s. So, hearing the evolution of their speakers was very encouraging.” 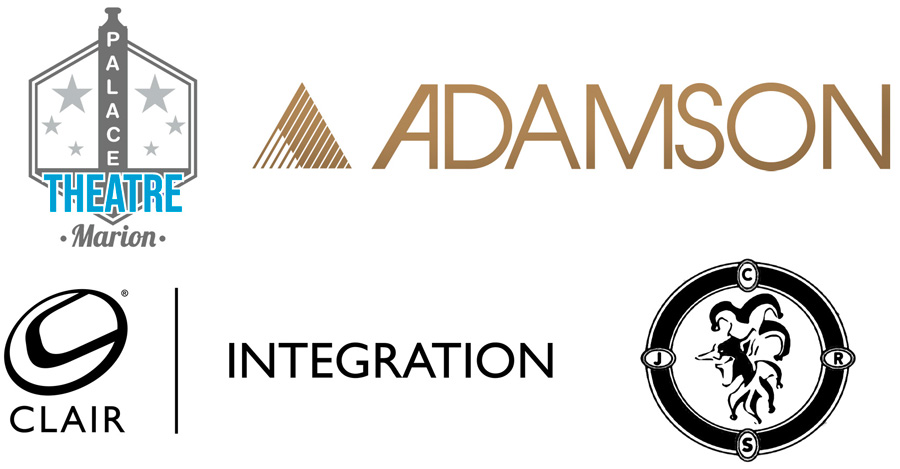 Ultimately, the new Adamson system allows Marion Palace to continue to fulfill the role it has had in the community for almost a century, and in a way that’s as easy on the eyes as it is on the ears.

“The sound almost feels like it’s coming from the walls, rather than from the speakers,” Jester concludes. “The way the loudspeakers were placed, tuned, and deployed – sonically, the system complements the visual aesthetic of theatre.”