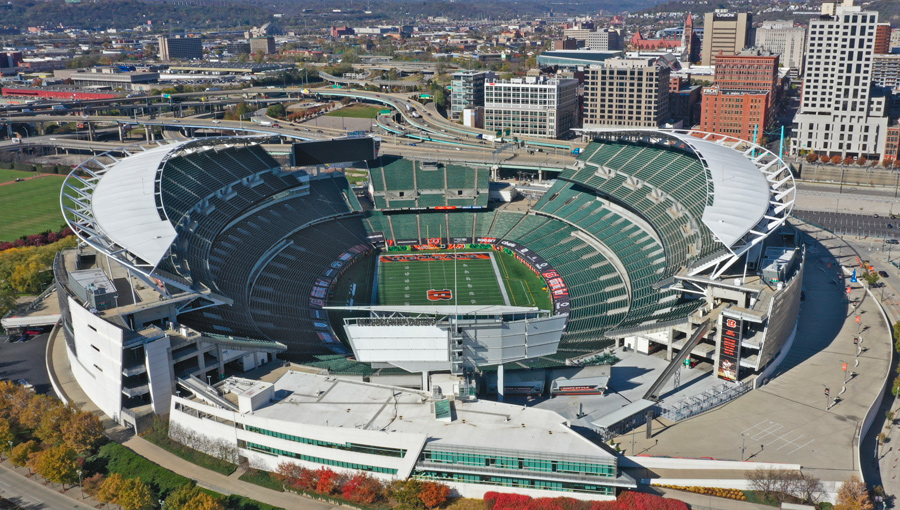 For the last 20 years, the Cincinnati Bengals have been taking on NFL rivals at Paul Brown Stadium. This 65,515-seat gridiron arena that has always placed a premium on the strength and quality of its audio systems.
Equally known as the site of performances by artists ranging from Kenny Chesney to Guns N’ Roses, PBS, as locals call it, subscribe to the notion that sound traveling throughout its concourses and seating areas should live up to concert-level expectations at all levels, whether it be on game day or for special events. 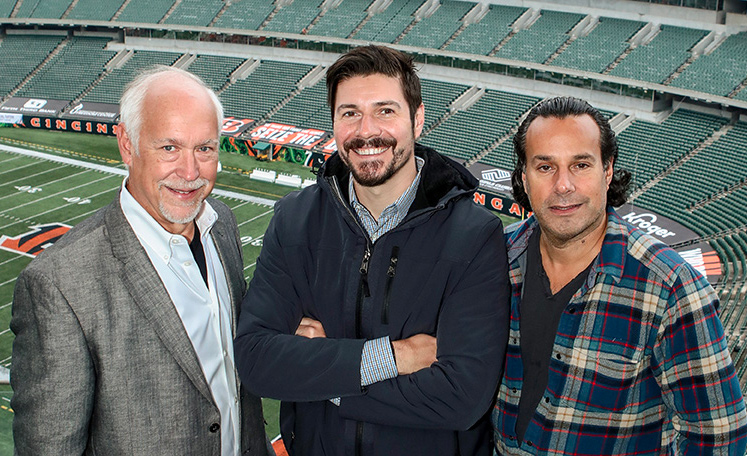 To that end, a three-phase project to re-energize the stadium’s original, 20 year-old audio blueprint was just completed this fall, debuting on October 4th before a reduced crowd that watched as the Bengals beat the visiting Jacksonville Jaguars.

Designed and implemented by Nashville, Tennessee-based Durrell Sports Audio Management, the new system is an amalgam of workhorse legacy components, upgraded audio processing, and custom loudspeakers built in Italy expressly to meet the needs of this unique application by RCF. 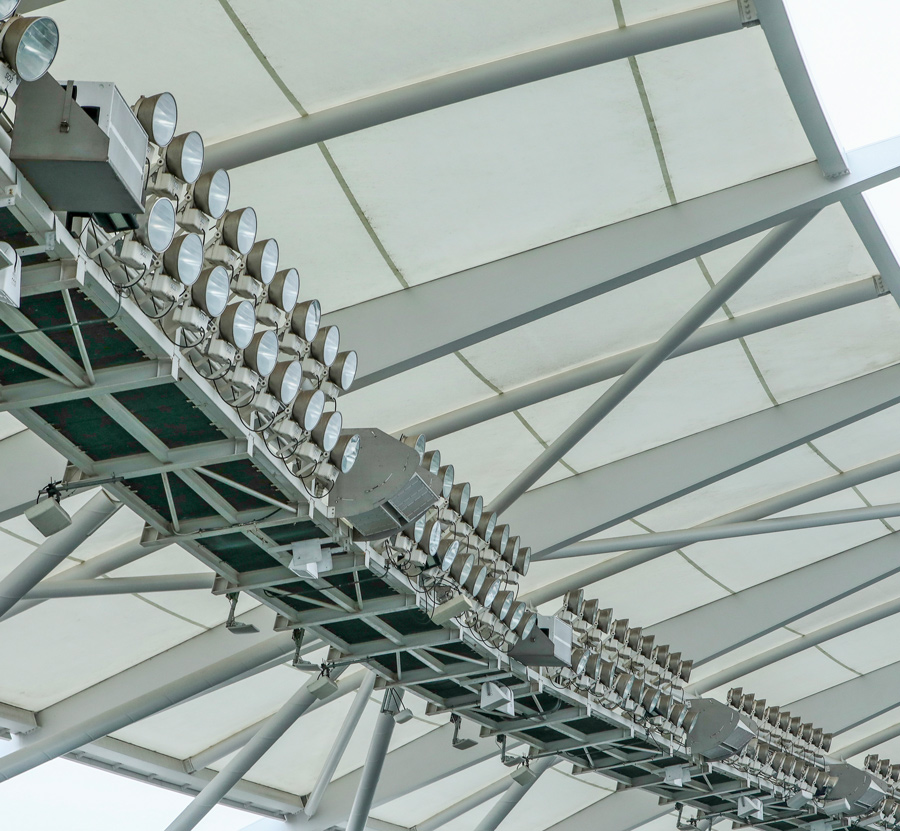 One of the eight 9007-AS encased in a specific plate and strapped as it should, clearly visible at the top left of this image. It is with the 7 other subs, the only active model among the 583 deployed at PBS.

“Paul Brown Stadium is unlike any other around the country when it comes to audio,” Durrell’s John Horrell explains. “Every aspect of its game-day production from simple announcements to music is as live as you can get.
There is nothing here that even vaguely resembles a pre recorded TV show. That’s why when we were chosen to upgrade the audio we felt it was essential to create a system that was capable of true, concert-level high performance.”

The upgrade project was implemented in three phases, with the first kicking-off in 2018 and bringing, among other things, new delay loudspeakers from RCF to the upper deck and canopy level. Phase two added approximately 120 new RCF loudspeakers to the lower level and 70 more to the canopy level in 2019, along with four dual 21-inch RCF subwoofers on each side of the canopy level. 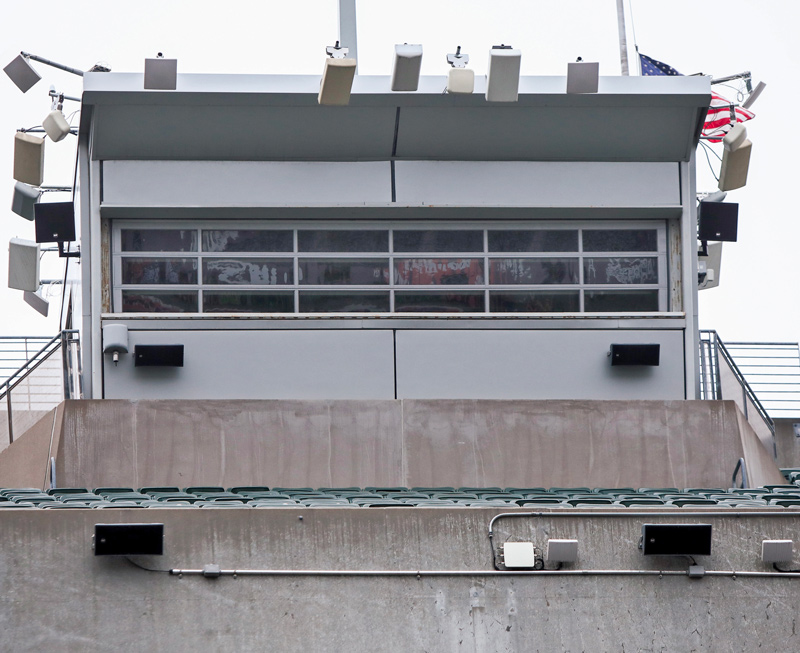 A modern stadium means Wi-Fi and great sound for everyone wherever they are.

Phase three of the project was approved in January 2020, so by February the job was underway, with Durrell working hand-in-hand with Louisville, Kentucky’s United Electric to turn the new vision into reality.
As the pandemic tightened its grip globally on labor and material beginning in March, the design and install team steadfastly kept to construction deadlines with help from suppliers and manufacturers including RCF.

Critical to the audio heard within this space as well as sound traveling throughout the entire bowl, custom-built, hand-assembled loudspeakers from RCF figured prominently within the phase three additions.

Wide horizontal coverage cabinets designated as model HVL 15-L1 and narrow coverage speakers bearing the model number HVL 15-P1 were provided by the Italian manufacturer as one-off custom units built to Durrell’s specs just for PBS. In between these custom long-throw boxes, standard offerings from the RCF catalog including model P 4228, P 3115T, and P 6215 cabinets were interspersed as downfill in large number.

An HVL 15L without its front grille. We can see the waveguide in the center, on both sides the 10” horns and at the ends, the 15” placed perpendicularly.

Based around a horn-loaded symmetric design, the custom HVL 15-L1 cabinets from RCF are outfitted with a pair of 15-inch drivers at the low-end, a pair of 10-inch midrange drivers, and two titanium dome compression drivers with four-inch voice coils at the top. All of the transducers feature neodymium magnets. 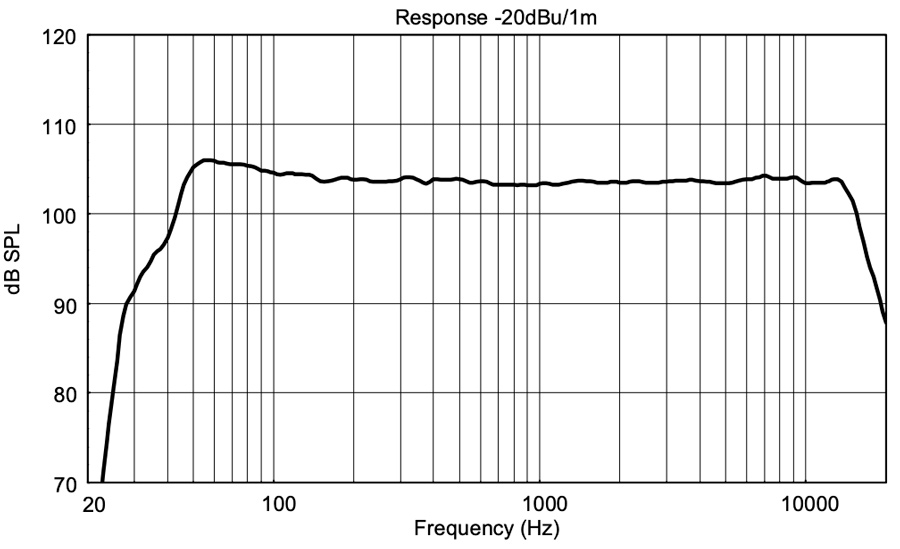 The more than exemplary frequency response of the HLV 15-P1 model designed to reach far and gaining 1 dB of SPL Max on the L1 thanks to a tighter coverage.

The eight HVL 15-P1 loudspeakers built by RCF for the PBS installation share many of the same design characteristics as their 15-L1 brethren, once again operating in the same frequency range and employing a bi-amped, horn-loaded symmetric design, passive filtering between the mid and high-frequency sections, and the same external construction. Equipped with the same latest generation transducers as the 15-L1 across the board, the 15-P1s differ in that they offer 60° x 30° coverage. 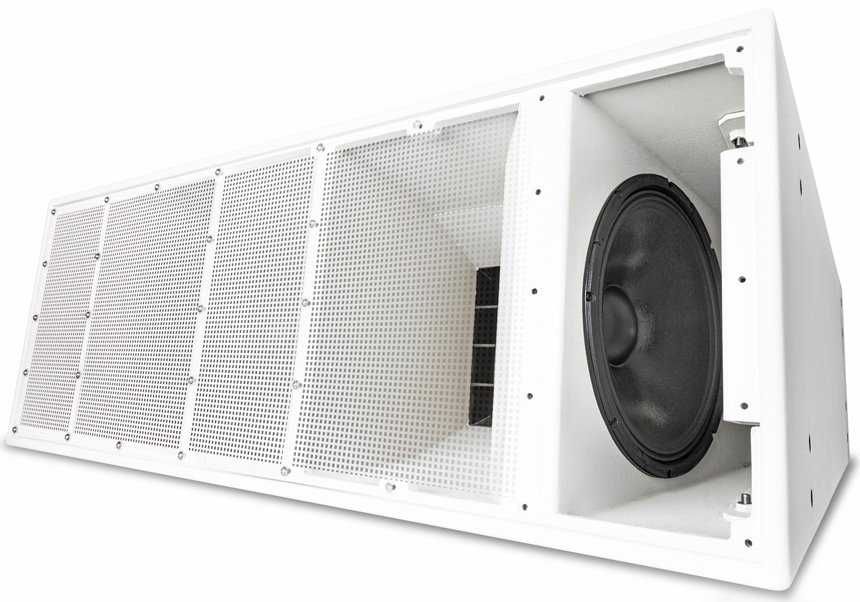 Widely recognized for their ability to put serious sonic horsepower within the confines of a stadium while maintaining intelligibility and even coverage at every seat, Durrell spent a lot of time analyzing the Q values required of the system and had the custom RCF long-throw enclosures built accordingly. Q is the directivity factor of the speaker. 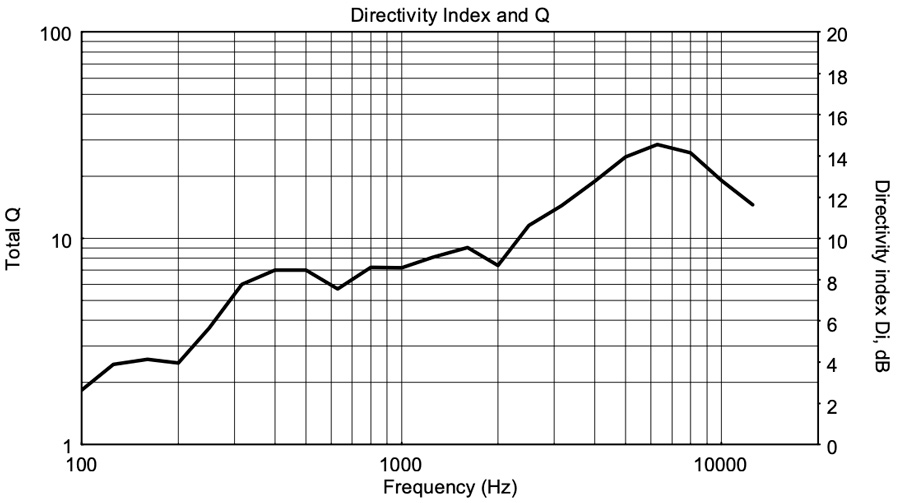 The directivity factor or Q of the P1. With a value of 2 to 100 Hz, that is to say offering a higher level of 3 dB towards the front, it reaches very high values and beyond 10 once the 4Path waveguide is in action.

“Understanding the Q speaker values in a stadium environment is imperative to managing reflections,” Horrell says. “Q, of course, in its simplest terms, is the speaker ‘throw’ value how far the audio carries away from the speaker.

Designing the correct Q speaker values in PBS was our biggest challenge, and with proper processing plus the custom RCF boxes built right to our own precise specs, we created a distributed system that no matter where you’re sitting you won’t be annoyed by a loudspeaker intended to bring coverage to somewhere else.” A view of HVL couples, completed by an infinite number of P-series boxes, with its polyetilene cabinet and 15” or 10” coaxial transducers.

Out in the bowl and throughout the concourse levels, Scott Simpson, executive producer of JungleVision Productions, relates that the renewed audio system’s RCF loudspeakers differ from their predecessors in terms of balance and overall coverage. “The expanded coverage in the facility is outstanding, it’s a whole new experience for our fans.

Live stadium sound is a unique animal in that hard, reflective surfaces and wide-open spaces abound. The thought that went into this design combined with the presence of the fans in the stands to help absorb unwanted reflections brings the whole system to life. Paul Brown Stadium can now continue to classify itself as one of the truly great sounding venues on the planet.” 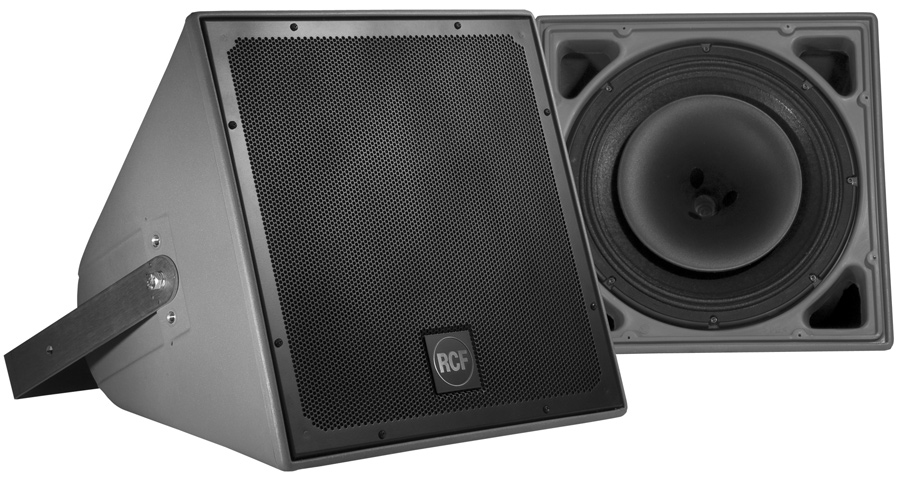 As for how the stadium sounds now from John Horrell’s perspective, he has this to say: “When we debuted the system the crowd may have been small, but it was very enthusiastic. We were all tickled to death with how it sounded. It had punch, and nothing was compressed to death.

The linearity was great and evoked emotion a pure presence that moved and excited everyone. OK, I’m an analog guy, but that’s hard to get out of a digital product. It additionally has dynamics that make it one of the better systems in the NFL. We could never have done this with line arrays, and given the history, this all should last another 20 years or more.” 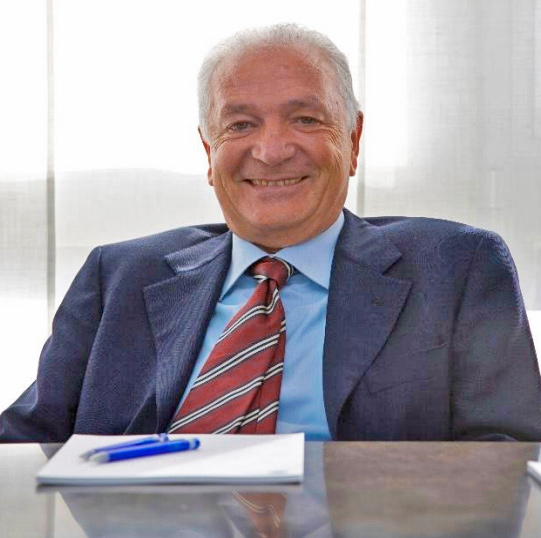 Led by CEO Arturo Vicari, the RCF team working in Italy was dedicated to getting the enclosures designed, built, and delivered to Paul Brown Stadium on time.
“All of us here and in Italy felt this project was vital as a boost to everyone’s morale,” says RCF USA National Sales Manager Tarik Solangi. “With added precautions made to keep everyone safe on the job, the factory churned out the work and kept our delivery promises. Beyond the virus, our biggest challenge was fitting our products into the exacting requirements dictated by the stadium.”

For CEO Vicari the project represents a milestone in that it brings RCF’s signature sound to one of the most prominent sporting facilities in the US. “All things considered,” he confides, “it was a considerable challenge for us given the complications created by the pandemic. Credit really is due to all the teams on both sides of the Atlantic that nonetheless executed the task with flawless organization and coordination.

The HVLs, the Italian stars of a truly American stadium!

The project was an ambitious one even when viewed through the lens of a pre-COVID-19 world. Accomplishing it decisively and on schedule within the context of today’s difficulties is testament to the efforts of everyone involved.”