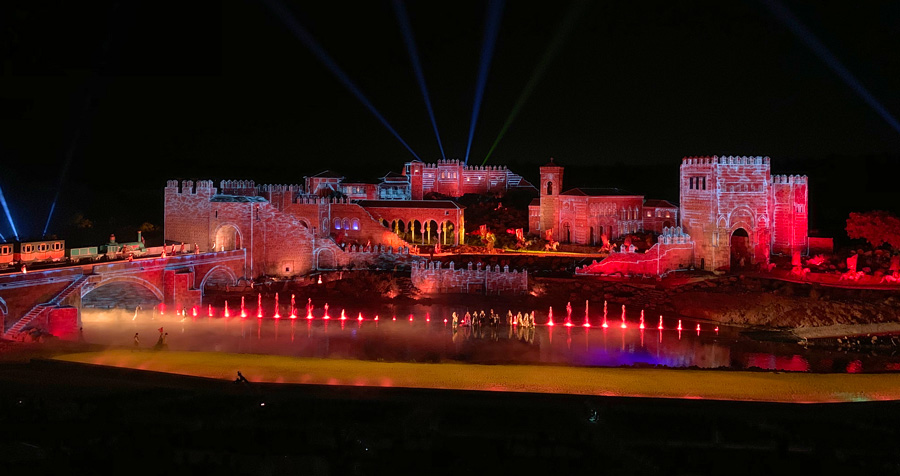 At the heart of Koert’s lighting spec we can find 74 x Robe BMFL WashBeam and 20 x MegaPointe moving lights. “El Sueño de Toledo” takes spectators on a hi-octane condensed one-hour journey through history – from the Reign of Ricaredo in the 6th century to the arrival of the railways – touching on the battle of Navas de Tolosa and the discovery of America along the way! The 1500 years of history is represented by 185 actors and a plethora of special effects.
Koert and Nicolas already worked together on several previous full-tilt, seat-edge Puy du Fou live shows and projects in France. The company is famous for its commitment to high production values and creating the very best guest experiences, so Koert was happy to work in Spain with Nicolas and the team.

The show is set up outdoors on a performance space approximately 125 metres wide by 100 metres deep, rising up towards the back. The set comprehend several permanent buildings and structures and a large lake, with the action taking place both on, in front of, and behind the water. Nicolas told Koert about the historical narrative and Koert thought of a lighting concept for the show which is played out by the large cast to a special soundtrack composed by Nathan Stornetta.

“The show’s essence was similar to some of those we have created in the French park, so some of the base principles and style needed to reflect a continuity, but it’s a fresh, new and completely unique dramatic tour de force which needed a lot of attention to detail” explained Koert.
One of the key Puy du Fou requirements was that the show was elegant and refined as well as providing lots of excitement. All of this had to be delivered in a classy collage of lighting, projection-mapped scenery and SFX.
With over 1000 lighting fixtures in total on the show, the 75 x BMFL WashBeams are undoubtedly the workhorses confirmed Koert together with some LED wash lights. Taking on this role, they needed to stand out from all the action and be a truly multi-functional tool. 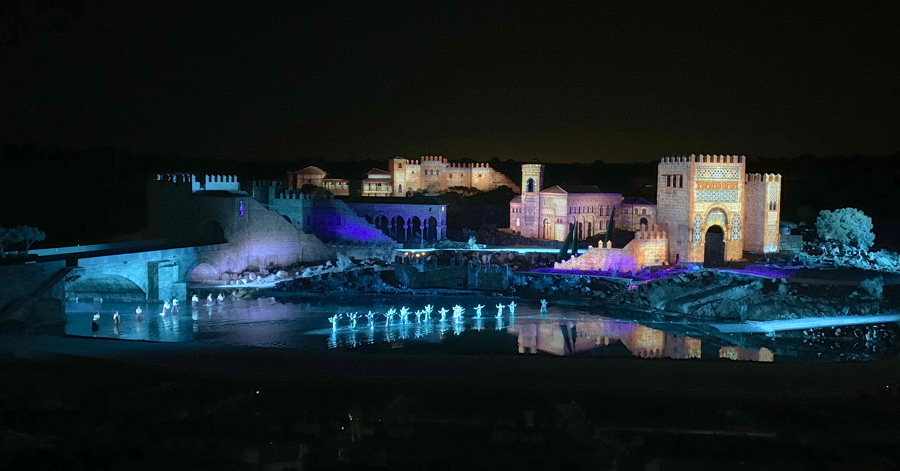 Due to the site topography and the fact that no sky rigging was available for overheads, most of the lighting is shooting in from the sides, with some fixtures at the back and others scattered around the suite at ground level plus numerous smaller concealed luminaires and footlights.
Koert auditioned several products in a shootout for the job – initially in 2016 when the project was first confirmed and budgeted – and from this extensive trial, the BMFL WashBeam emerged as “easily the best choice”, especially for the 40 – 100 metre throw distances for which they needed something with serious power!
Another shoot out to find the best lights for aerial effects was won by Robe’s MegaPointe. “It’s the nicest beam I have seen for a long time,” commented Koert. The BMFLs are positioned mainly at the sides of the performance area with a few around the front, while the MegaPointes are all hidden in the hills at the back. 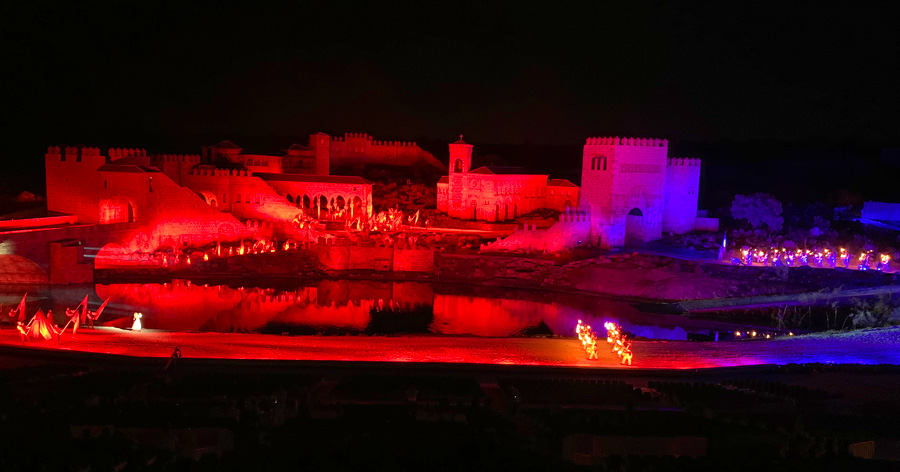 The MegaPointes blast out into the night sky from behind set pieces, slicing through the haze, fog and general natural atmosphere with their piercingly bright beams. They are rigged at different heights to give a variety of positions and some interesting angles.

With any show of this scale, lighting is a smart combination of creating mood and ambience and lots of big statements as well as with highlighting and accentuating story-related details and complexities. Koert worked on the general environmental lighting treatments first, and then on illuminating more specific performers and action.
He worked closely with the PDF video team and with video content creators, Cosmo AV, so that lighting elements merged seamlessly and harmoniously with video-mapped onto some of the buildings adding a further layer of texture to the bigger picture. He found the BMFL’s frost options helpful in blending lighting into the projections.

The big challenge on this project was the time

Koert and his own programming team of Christopher Bolton and Luc de Climmer had three weeks on site overall to get everything into the grandMA3 console, but out of that there was only one complete week of lighting programming. Construction was ongoing for the whole period, adding extra pressure on all technical departments.
While the basic building blocks can be visualized to some extent, real time in situ is vital to focus on more complicated cues like the proper illumination of Olivier Beriot’s impressive costumes. all resulting in a truly breath-taking show for the public who are flocking to see it.

The show is currently breaking for the winter and will be back in full force in April to be enjoyed by thousands of visitors through 2020.