North America’s National Hockey League (NHL) spectacularly returned to play without live audiences but with massive enthusiasm, determination and impressive TV and online followings for the 2020 Stanley Cup playoff series which had been suspended in April during the Coronavirus pandemic.

Tom was asked to design lighting for the two Arenas Scotiabank in Toronto and Rogers Place in Edmonton working closely with production designer Gary Wichansky of Seattle based Hotopp. The two have collaborated in these capacities on several previous NHL projects, and together they crafted a production design to WOW everyone including their clients, the NHL entertainment team of Steve Mayer, Rachel Segal, Bob Chesterman, John Bochiaro and Renee Riva. 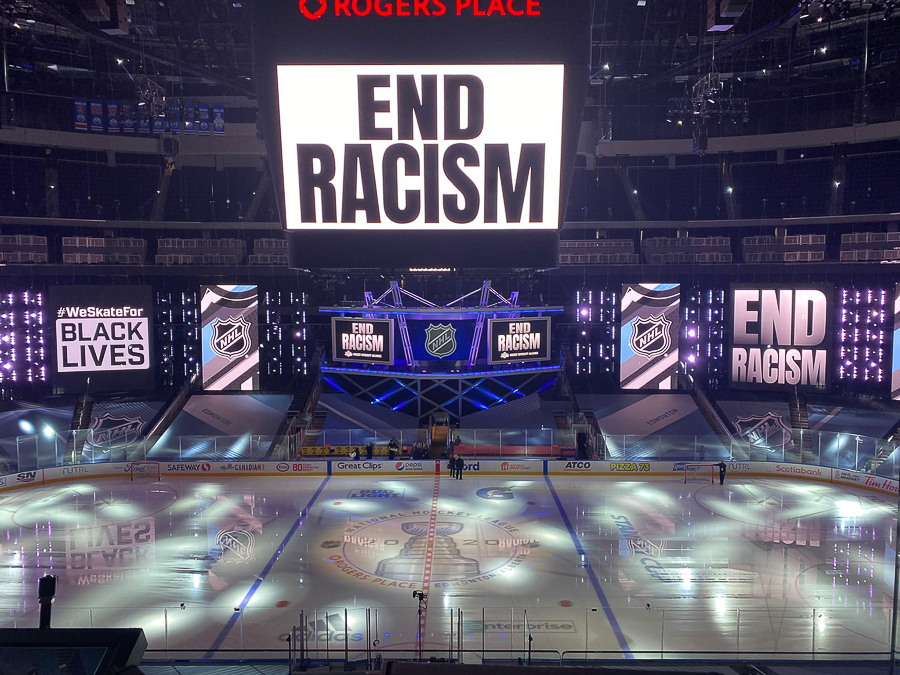 With all tours grounded and live events cancelled due to the pandemic … rather than it being the usual bunfight to get specific kit, Tom found himself able to pick and choose pretty much whatever fixtures he needed to make this project rock!
The overall production offered what is currently a rare and much-appreciated opportunity for some of the industry’s highly skilled creatives and technicians to work through the months of July and August.

Tom himself was not just hugely proud to be part of this whole NHL experience which he describes as “brilliantly organized and handled by NHL and Aurora Productions,” but also delighted to be in a position of getting others onboard and working during this very challenging time!
The production featured crews across all disciplines and departments who had been integral to many of the highest-profile tours on the road in March when the industry ground to a halt.

Tom in turn asked four brilliant lighting directors onboard to look after the shows for him once up-and-running. Kurt Wagner and Brent Clark were stationed in Edmonton, and Corey Thom and Eric Belanger in Toronto, chosen – amongst many other skills – for their “ability to think independently, take initiative and make informed decisions for themselves.”

Tom’s aesthetic brief was to make the start, end and between-play moments of the matches an awesome visual experience in an empty arena, creating atmosphere and drama that looked fantastic on the 32 x camera shoot, complete with hi-impact theatrical flourishes so the players could see and feel the lighting there on the ice, while fans were transfixed at home fully engaged in that unmistakable adrenaline buzz of the action … even when watching remotely. 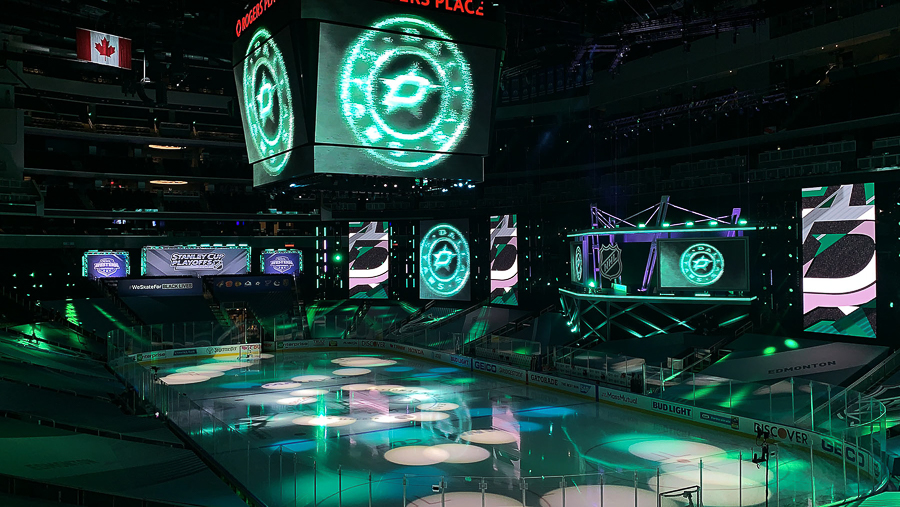 During the matches, the look was a big, open, well-lit white space with all focus totally on the playing action. Immediately if a goal was scored, or the whistle blown, everything around the arena erupted into an ocean of color and movement as lighting and video worked harmoniously to bring a hair-raising vibe to a huge empty space.
See it, feel it, experience it!

Some of the players even commented that it felt a like being ‘inside’ a video game – a show look that definitely worked as a mood enhancer and made an impression! Gary created a lot of special video content for the project with logos and graphic stings, etc. and more came from NHL, including footage of fans cheering on their teams.
Fabric was stretched over some of the seating blocks so large areas could be lit in team colors and illuminated with other effects. “We went very large and bold for our production moments,” commented Tom, “and that worked on different levels for everyone.”

The design was identical for each venue, but with some variations in the lighting kit lists due to local availability and what could be added from the existing in-house systems. A lot of LED screen made up the set with eight different surfaces wrapping around 500 metres and almost 180 degrees along one of the venue’s long sides, rigged in the seating area to bring it close to the ice. 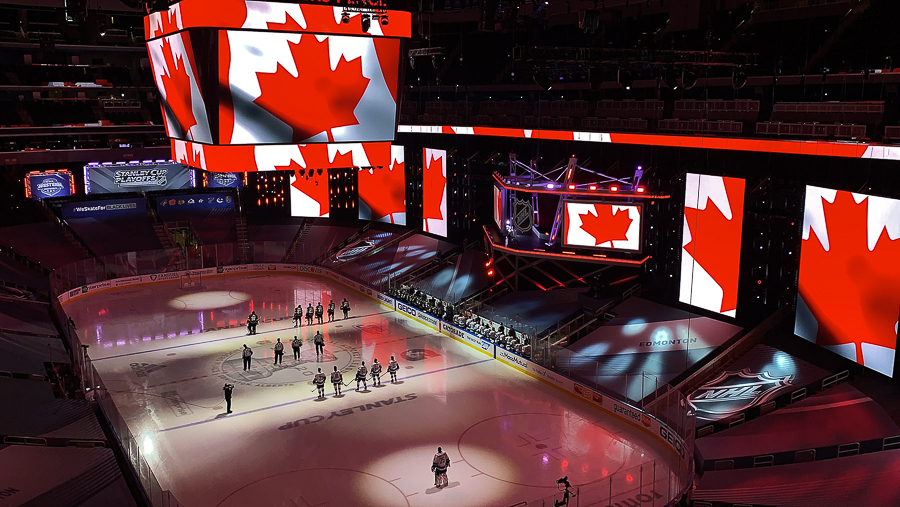 Tom frequently has Robe at the core of his designs as workhorse fixtures and there’s usually a couple of specific Robe products which are ‘must-have’ every time.

“In this case, it was because I needed fixtures with that power, punch and brightness to dazzle and cut through all that LED plus the highly reflective bright white surface of the ice, with limited smoke and fog mostly … and still look great on camera,” he declared.

In Edmonton, it was a combination of 32 x Robe Pointes, and 19 x LEDWash 1200s helping to raise the roof and the lumen levels, while in Toronto, 104 x Pointes, 19 x LEDBeam 1200s and 36 x Tarrantulas had the honor. The fixtures which also included several hundred others at each venue were rigged on a network of trussing installed in the roof.
On site, Tom and the production teams worked closely with the venue house crews and technical – Clayton Hubrick and Keith Hough in Edmonton and Mark Weglinski in Toronto. Like everyone, they were elated to see ‘showtime’ unfolding again for real! 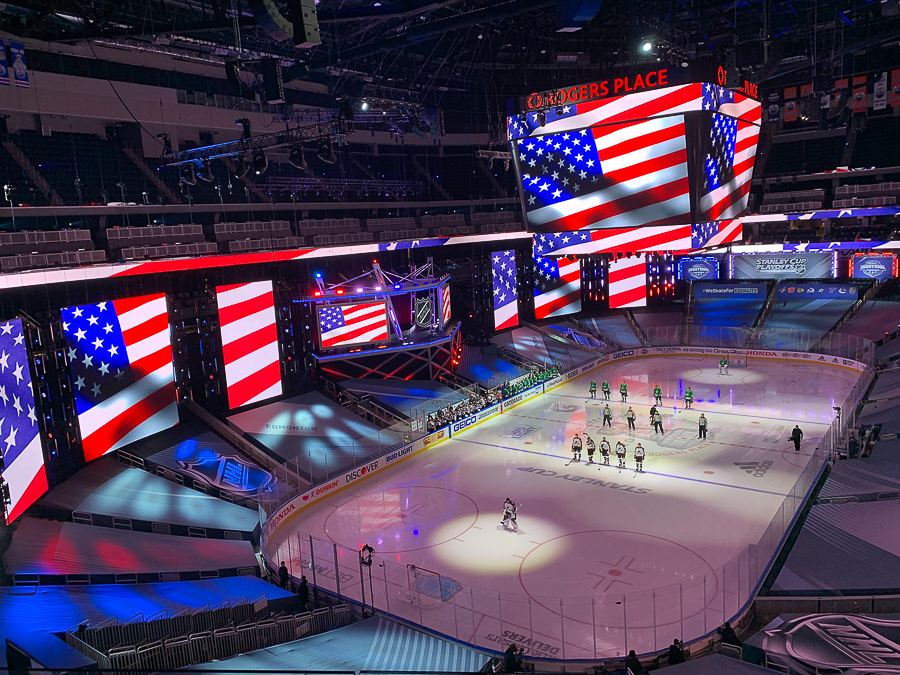 This was preceded by some marathon days and nights of Skype’ing and Facetime calls, and substantial pre-vis activities after Tom was first approached about the project in May. Due to the rapidly moving Covid-19 situation, formats, dates, challenges, ideas, and solutions stayed fluid right up until the production and NHL arrived in Canada for the build, so the design also required an inbuilt flexibility.

Copious amounts of administration, logistics and lateral thinking was energized by the NHL to get everyone to Canada on time to start the build.
Tom and Gary were two of 19 key production crew brought from the US on special visas issued by Canadian prime minister Justin Trudeau, apparently a big fan of The Who and Bowie, so Tom’s CV clearly impressed him! Before that, everyone travelling on these visas had to home test ‘negative’ twice.

Once in place and in their respective bubbles including their hotels and specially designated eating areas connected to the arena by secure walkways with their own entrances and routes production crews, players and all related personnel were tested daily by a team of 14 medical staff on site dedicated to ensuring all stayed safe.
Masks were mandatory while working, social distancing was rigorous, and everyone washed their hands regularly as “hands, face and space” requirements ruled the working environment.

“It was a truly amazing, uplifting and at times extremely emotional experience for all,” enthused Tom “and one of the most satisfying projects in which I’ve ever been involved! Everyone was so joyful and absolutely delighted to be back working and doing what we are all completely passionate about showing the world just how much value, imagination dynamism and sheer enjoyment this innovative industry brings to events worldwide.”
The 2020 Stanley Cup final in Edmonton saw Eastern Conference champions Tampa Bay Lightning defeat Western Conference champions, Dallas Stars.