A zactrack SMART real time tracking system has been installed on the Main Stage at the Tampere Workers’ Theatre (Tampereen Työväen Teatteri – TTT) in Tampere, Finland, where it is being utilised by both the audio and lighting departments.
The building housing this 800-capacity stage was completed in 1985, its 20-metre width making it the second largest stage in Finland. The Theatre’s acclaimed repertory programme presents Finnish plays, world literature classics and a diverse and vibrant range of musicals. “Come from Away” was one of the first productions to benefit from audio and light tracking via Zactrack. © Kari Sunnari

In 2020, they invested in L-Acoustics L-ISA immersive audio technology which brought the requirement for a leading-edge tracking product that would work for both audio and lighting explained Pauli Molnar, sales manager from zactrack’s Finnish distributor, Intersonic based in Espoo.

In the initial months of using L-ISA, it soon became apparent that accurate, good quality tracking was essential to take full advantage of its dynamics, directionality and creative potential … without embroiling sound designers and engineers in substantial amounts of programming time.
Controlling the sound inputs manually, especially for some of the large-scale musicals staged at TTT, was not a practical option, but getting the right tracking system onboard was a viable solution, so they started looking at options.

L-ISA takes into account elements like distance shifts as actors move upstage / downstage, so the sound is properly perceived as nearer / further away, and with this detailed 3D aural experience central to the L-ISA concept, tracking that offers full localisation plays a vital role in optimisation.

“Come from Away”. © Kari Sunnari

The theatre’s head of sound Jarkko Tuohimaa and lighting technical manager Sami Rautaneva worked closely together with TTT’s sound designer Kalle Nytorp and lighting designer Eero Auvinen in assessing different systems with their respective departments, choosing zactrack for its suitability to both audio and lighting tracking.

Audio requirements are less complex and demanding as the ear tends to be more forgiving than the eye when processing precise directional information from the brain. There is an approximately 7.5 degrees window in which the brain will still interpret the sound as coming from the source. So, while other tracking options might deal with sound, when it came to lighting, the field was narrowed!

When tracking audio, a zactrack transmitter (tracker) can be taken from its recharging cradle, linked via an OSC stream to a dedicated sound processor, assigned to an object (in the L-ISA Controller) and have the correct input parameter IDs added, so the object follows the tracker attached to the actor. This quick and straightforward set up was a major reason for choosing zactrack.

The zactrack Smart kit : From left to right, Anchor, the antenna of the system connected via RJ45 POE network – Station, the loading station for Trackers (targets) up to 5 – Tracker, the target – Server, the heart of the system, which automatically calculates the 3D space (antenna/puck/tracker) and generates the control signals for the lighting, sound or video And underneath, Puck, the ground sensor that configures the 3D space and Tracker, the target.

The system was installed by the theatre’s technical team, a process that was fast and straightforward. Four zactrack pucks were positioned around the stage and self-calibrated, which took a few minutes, the address IDs were then assigned and tweaked, and they were good to go.
For lighting, the smoothness and precision of the tracking is vital. The zactrack system can predict accurately how an actor or dancer will move in a certain direction at a certain speed and moves the corresponding lighting fixture/s accordingly.
This was the first zactrack system that Intersonic had supplied to a theatre, but they see a big future for the product.

It brings many advantages to this type of environment including the convenience of magnetic charging cradles. As soon as the tracker is dropped in, it deactivates and starts charging … so no connectors are needed. Great for a busy theatre like this where they are in use daily. 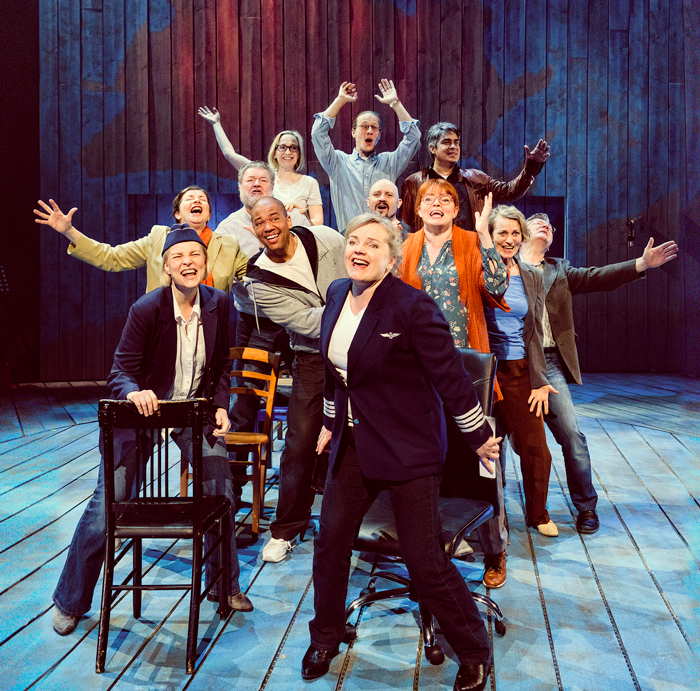 “Come from Away”. © Kari Sunnari

Easy calibration is another big bonus, one that will also appeal to rental and production companies and is “ideal for scenarios where the system has to be set up multiple times,” noted Pauli.

Thirdly, the Workers’ Theatre Main Hall is large and the combination of L-ISA and zactrack enhances the production team’s ability to close the space right down and make it more intimate as appropriate for shows or specific parts of performances.

With the substantial stage space at TTT, they have wanted to perfect aural localization for many years, with the ultimate goal of guests not perceiving that any traditional sound reinforcement is being used!

Talking generally Pauli thinks zactrack is a “remarkable product” in its own right, and especially when combined with L-ISA which is also revolutionary as a concept and a product, representing a “paradigm shift for pro audio applications that’s not been experienced in decades!” He adds, “The fact that zactrack can simultaneously make lighting AND sound departments happy in a venue space is just fantastic!”

The first three major production at Tampere Workers’ Theatre using the new zactrack system were all full-on musical spectaculars including Matilda, Come from Away and Momentum.