French ‘prince of darkness’ was a 2019 Coachella sensation and was followed by a major tour. After a breathtaking stage set at Coachella last April, French record producer and DJ Gesaffelstein created a blueprint for the huge Against the Night, Across the Time US tour that was to follow towards the end of the year. 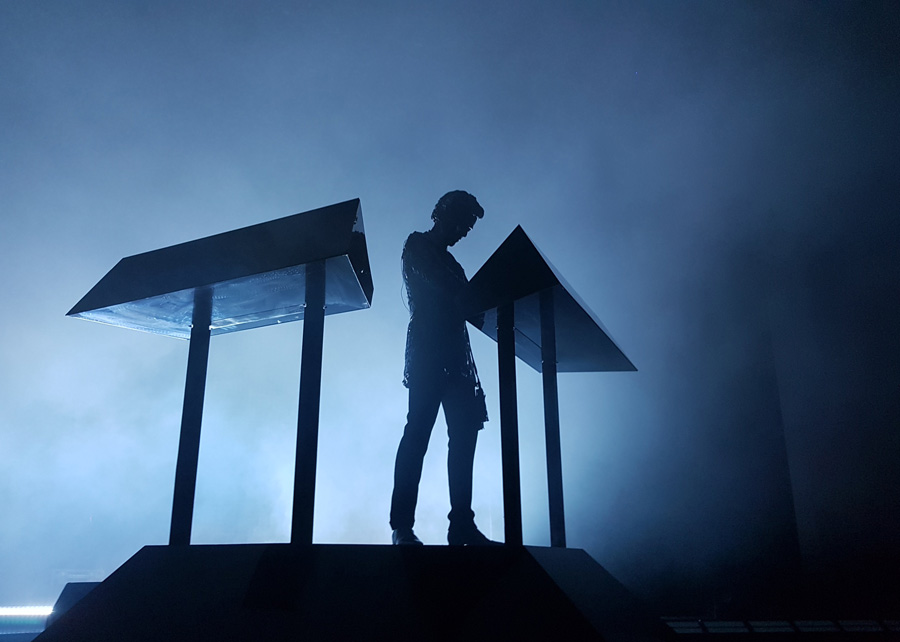 Installed behind the artist was a 32ft high monolith covered entirely in Vantablack, a fragile material known to deliver the world’s blackest black, erasing any visible features on a 3D surface and making objects very disorienting for the brain. The UK-designed material was present for the first time in a live performance context.

Show producer, Matthias Leullier, from Live Nation France, collaborate alongside LD Pierre Claude to turn the concept into reality, the latter in turn dipping into his GLP toolbox.
He specified 54 x JDC1, hybrid strobes as the main fixtures (running them mostly in SPix Pro Mode4, using 62 DMX channels). Two lines of 12 JDC1 on the floor surrounded the artist, with a 24 JDC1 tower behind the Vantablack, and a further six hybrid strobes on a truss. Meanwhile on the floor were 12 GLP impression X4 Bar 20s run in full pixel mode.

Leullier said, “The main idea behind Gesaffelstein’s set was to create a memorable experience with a super-black monolith able to challenge the audience’s depth and spatial perception. The artist appears to ‘float’ against the Vantablack monolith, a mesmerizing two-dimensional black void. 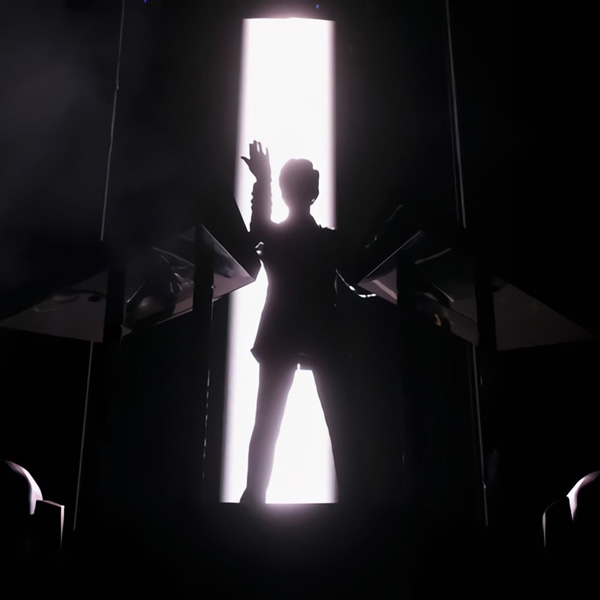 During the performance, this also separates into two vertical halves exposing a high-resolution LED display combined with a complex light show including heavy strobes, the contrast of all the bright lights and the super dark material creating an extremely intense visual experience for spectators.” And it is GLP’s unique JDC1 which delivered this heavy strobing for the EDM artist who is colloquially known as ‘the prince of darkness’.

Pierre Claude first started designing light for Gesaffelstein back in 2013 when part of the Parisian agency Franz & Fritz, who had been touring with the artist for some time. “I was very glad that he called me back me at the end of 2018 for the preparation of his new live show,” he stated. “His music and his universe are very dark.”

“White light is mainly used for his live shows,” Pierre explained, “and this makes it possible to bring out the black; the silences make it a very theatrical spectacle and it pushes the limits of my creativity to work without colour and use the Vantablack as the centrepiece for this tour.” Painting the Vantablack represented the longest and most complicated period of the design.
Pierre Claude admits that he reflected at length on how best to treat the lighting. “The idea was to highlight elements that absorbed everything, not to be lit directly. For an artist dressed and helmeted in black, the lighting needed to be theatrical and intense… a nightmare because in normal productions the set design is an added value, whereas here, the challenge was to make it disappear.”
After the success of Coachella, making the rig ‘tourable’ became the most challenging part of the project. It was conceived in four layers: two Vantablack Monolith sections 32 ft high on Kinesys motion control and two LED screen sections also on Kinesys; the other sections comprised a 32ft high LED Warm white screen, a GLP JDC1 tower comprising 24 of the hybrid strobes, with a massive floor package and DJ booth on a rolling riser containing lighting. 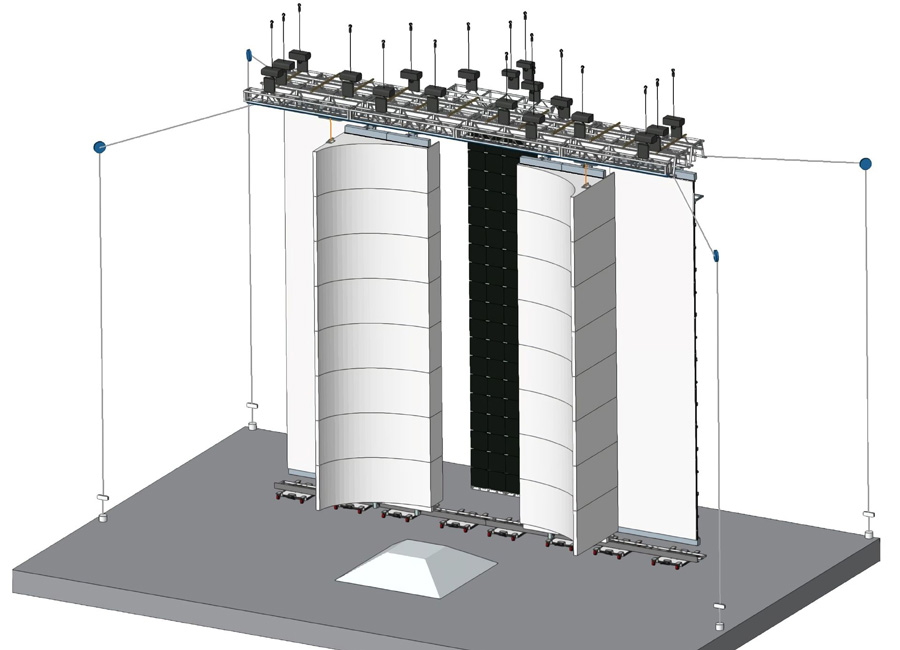 For the tour a further mid-stage lighting truss was included in front of the Monolith, working with PRG Projects. In terms of scalability, they retained the same width to guarantee the set movements but with variable height (since it is divisible in 4ft sections).
Harking back to the 2013 tour Pierre Claude wanted to retain the emblematic beams. “But I also wanted to add something extreme which emphasised the width but also the immense height of the set and which would be used as back light.”

For the floor and the tower the JDC1 was an obvious selection, he said. “I needed a machine that could tilt, but at the same time form a single huge linear strobe by placing the individual units next to each other.
“The show is very minimalist, and I am careful not to use different fixtures at the same time. The JDC1 doubles the capacities of a conventional strobe, effectively with two machines in one … giving 1152 pixels in all! It was definitely the ideal product to use as the strobe tower revealed the immensity of the monolith and gave the impression of a black hole.”

At first the lighting designer had been reluctant to use GLP’s impression X4 Bars in the design; he had just finished the tour of Phoenix, in which PRG Projects were also involved. The X4 Bar had been the main fixture in this set and he admits he was looking to change.
“But it has clearly become my favourite fixture and so I returned to this solution. It helped to mitigate places that were too dark when the monolith was open, and helped to bring a different aspect of the design. 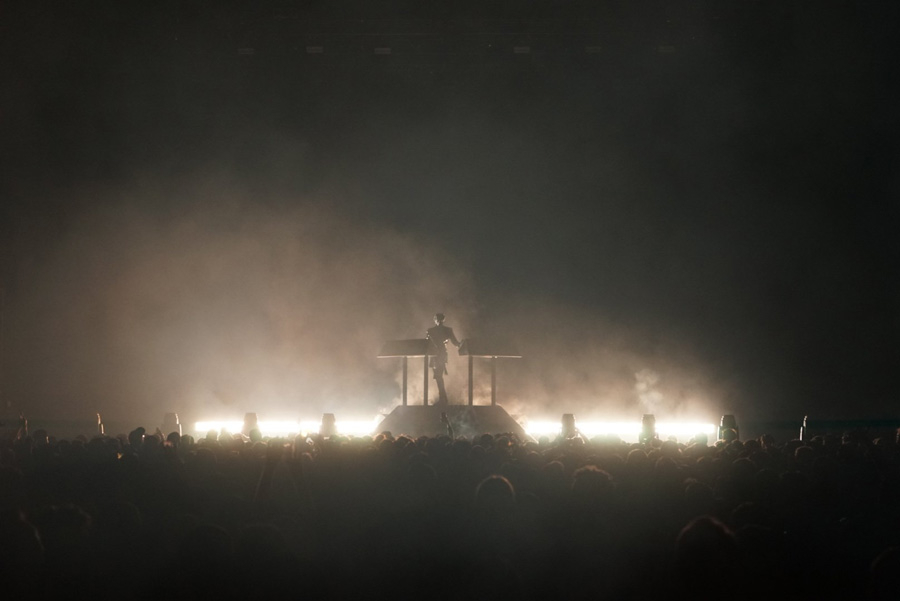 “The idea of moving the set with Kinesys [motion control] is untypical for EDM-type shows; we wanted to offer different looks but 75% of the movements are not visible during the black cues—the idea was to confuse the minds of the audience by revealing a different look when the light returned.
“As for the video, we had LED screens but no visuals as such, just gradients or solid colours. The X4 Bars were the perfect products to reveal the few visible movements and I used them in 88-channel mode to allow individual pixel mapping.”
In summary he said: “Obviously the JDC1 and X4 Bars have now become my standard; their reliability is incredible, and after using 66 machines over 20 shows we didn’t once need to call on a spare.”

Paying tribute to the artist’s manager, Manu Barron, producer Matthias Leullier, tour director Lara Scheidt, lighting assistant Vincent Leroy, and crew, Stephen Rose and Conner Ostrowski, Pierre Claude confirms that the conclusion of the tour certainly hasn’t marked the end of the road for this set design. Several headline spots at festivals in the US next summer have already been announced along with a single date in France next October at the AccorHotels Arena.

“We are already working on this show and we will be introducing a lot of additional JDC1 for this show,” Pierre promises.