The two new control surfaces – CS-R5 on the left and CS-R3 on the right – and the new DSP engines behind them.

This is a huge surprise. Yamaha rounds out its RIVAGE PM series of consoles, creating a true signal mixing and transport ecosystem with two new surfaces, PM5 and PM3, and two new mixing engines, DSP-RX and the more powerful DSP-RX-EX.

In case you missed the first part of this saga of Japanese high-level digital audio mixing, let’s start from the beginning. The first model to make its debut was the PM10 system, a large control surface with three banks of 12 faders, two large touch screens and its huge Selected Channel panel, not to mention its famous burl walnut arm rest, two dedicated RPios equipped with transformer-emulating Hybrid preamps and the Silk circuit and a separate DSP engine.

PM10 also brought in the new TWINLANe signal transport protocol and, above all, very high quality sound. A few years later Yamaha introduced the PM7, no longer a simple surface but a full-fledged console with an internal mixing engine, communicating with the RPio’s via the same protocol, but also with the less expensive Rio stage racks via Dante. The PM7 configuration was a way to offer a super console at a more affordable price and without sacrificing RIVAGE’s unique flexibility, power and sound.

A height designed to offer the best working comfort.

The CS-R5 surface, for PM5 RIVAGE systems, features three large touchscreens and a condensed “Selected Channel” section for smooth, simplified operation. The depth of the console has been significantly reduced for more comfortable operation and better visibility of both the controls and the stage. 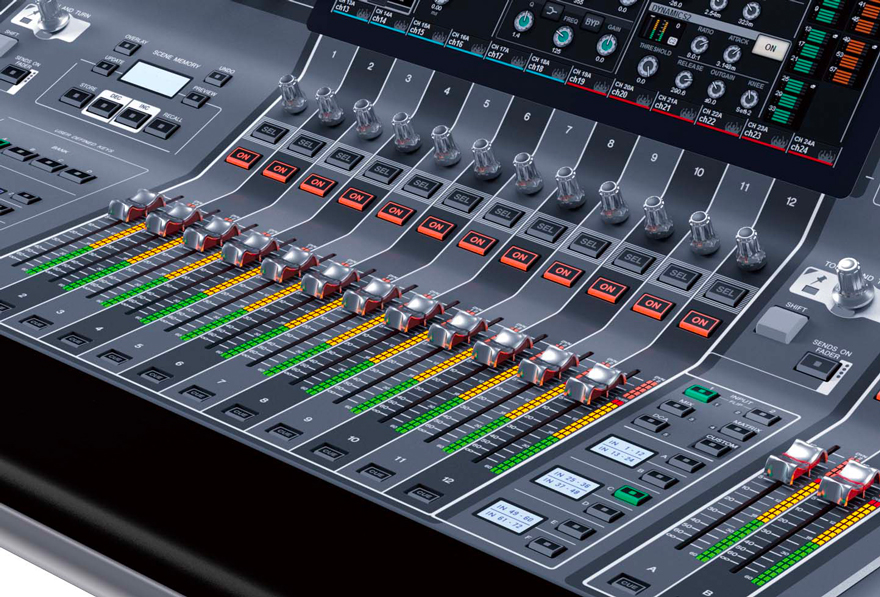 The VU meters are now located next to each fader in order to additionally reduce the depth of the control surface. These are highly precise and offer increased visibility, making it easier to fine-tune the levels.
At only 42 kg, the CS-R5 control surface is also remarkably light and can be easily transported and handled by two people.

The CS-R3 control surface, for RIVAGE PM3 systems, packs all the features and performance of the series into a console that is just 114 cm wide. This makes it the most compact of the series, while offering the same fader configuration as the rest of the RIVAGE PM series three banks of 12 faders each.

Although it has only one touch screen, it works specifically with the Selected Channel section to provide simple and intuitive control, familiar to RIVAGE series users and easy to use for CL and QL series users. A full suite of physical controls also makes the CS-R3 surface an excellent choice as a monitor console. 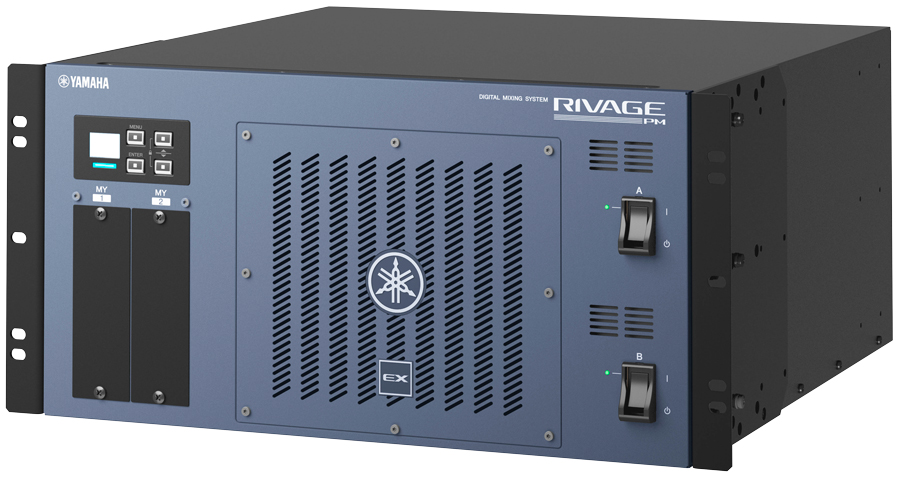 The new DSP-RX engine in the EX version: almost twice the resources for very large configurations. 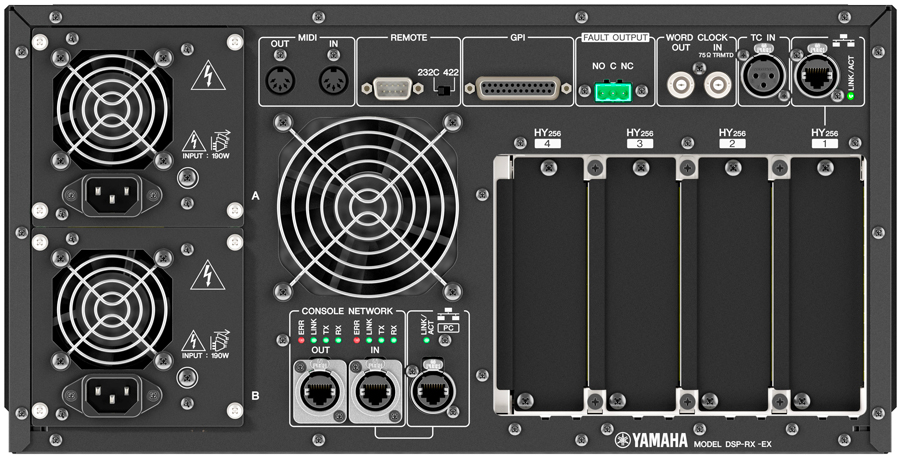 A rear view of the DSP-RX with its four slots for HY cards where you can choose, for example, between the TWINLANe multi-mode HY256-TL fiber cards – which have a maximum transmission distance of 300 meters – or the HY256-TL-SMF single-mode fiber cards, with a maximum cable run of 2 km. The digital audio signals are transported at 96 kHz and 32 bits. That’s quite a bandwidth…

If you start with the DSP-RX and need more processing capacity later, a DEK-DSP-RX Expansion Kit enables the DSP-RX to deliver the same performance as the DSP-RX-EX.

A pair of DSP-RX-EX engines, but this also works with the less powerful engine in mirror mode. Absolute reliability with PM10, PM5 and PM3. With its internal engine, PM7 cannot offer redundancy.

The new engines also allow mirroring: two DSP-RX engines or two DSP-RX-EX engines can be employed in situations where redundancy is required.
If a problem occurs with the master DSP engine, the second one takes over so that the show can continue without interruption. This is true except for the PM7 console which has its own DSP with no possibility of mirroring with an external engine.

The choice of two DSP engines with different mixing capabilities, plus a total of five control surfaces, including the two new models, gives sound engineers the flexibility to create systems that are perfectly suited to all types of applications.

All RIVAGE PM systems use the same DSP engines, the same I/O racks and the same firmware. Therefore, no matter which control surface is used, the sound, the characteristics and the basic operation remain the same. 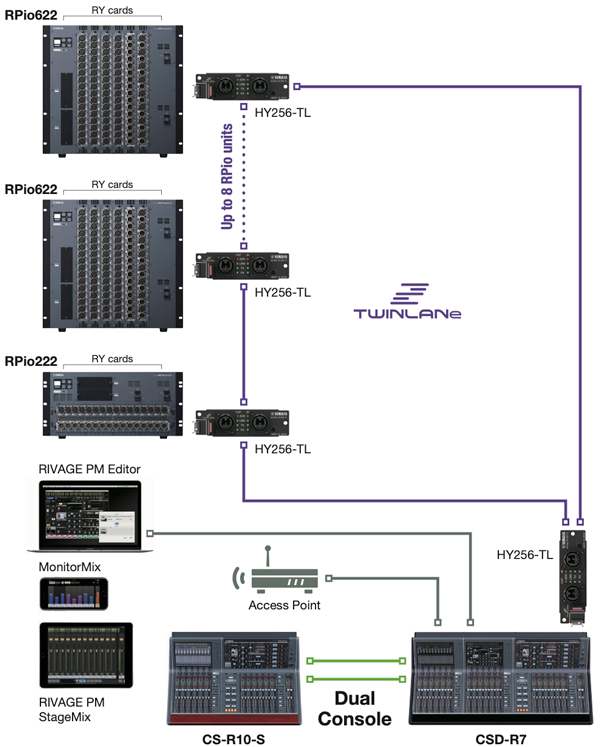 A configuration using a PM7 with its own on-board DSP and an R10-S control surface, the compact surface of the PM10 system. This provides additional channels for working with 60 faders or with two operators. There are 144 mic preamps in three RPios connected via TWINLANe in a ring.

The system’s “Dual Console” function allows a second control surface to be used as a “side-car”. Any control surface can be used one day at FoH, the next day as a monitor console, and then as a side-car if required. Additionally, all models have the same fader configuration with three banks of 12 faders each, so that the same fader organization can be maintained regardless of the model being used. 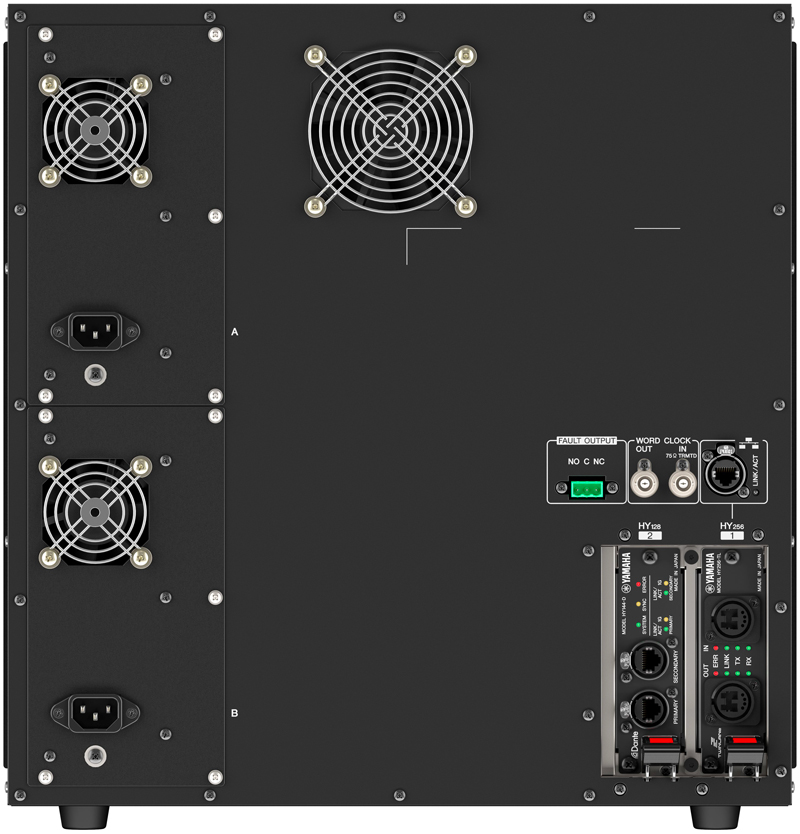 The rear panel of the RPio622 stage rack, with its two slots for HY cards occupied by a TWINLANe module and a second Dante module.

Like the RIVAGE PM10 and PM7, the RIVAGE PM5 and PM3 are compatible with two main digital audio network technologies: the proprietary Yamaha TWINLANe network (which can carry up to 400 audio channels simultaneously with extremely low constant latency, 125 µs at 96 kHz).
And Audinate’s Dante network, a standard also found in the CL and QL series digital consoles and in many other Yamaha product lines. With Dante, however, the latency depends on the number of switches traversed and is therefore rarely less than 250 µs.
In the case of the TWINLANe ring fibre network, it is possible to use single-mode or multi-mode fibre optics depending on the operating distances; simply use the appropriate HY256 interface cards: HY256-TL for multi-mode fibre or HY256-TL-SMF for single-mode fibre.

RIVAGE PM5 and PM3 inherit Yamaha’s RIVAGE PM philosophy: any compatible I/O rack can be used on stage for accurate, true-to-life, transparent sound recording and allow creative touches to be added as needed or desired.

The upcoming new firmware, version 4.0, will be compatible with the whole RIVAGE PM series, from RIVAGE PM10 to PM3. This new version offers many important improvements in the user interface and functionality, including the addition of a new premium plugin, the EVENTIDE SP2016 Reverb. The SP2016 comes with numerous presets, and also offers extensive editing capabilities that will allow sound engineers to customize their settings. 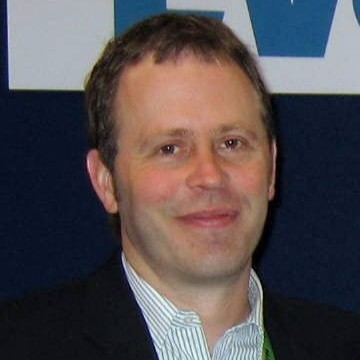 Ray Maxwell, Vice President of Sales and Marketing at Eventide, comments: “The lush and distinct reverbs of the original Eventide SP2016 have been used in countless hit records for nearly 40 years.
The original reverb can be heard on albums by Adele, Mariah Carey, Eminem, and more. Eventide is honored to partner with Yamaha to bring the signature reverbs from the SP2016 (Room, Stereo Room and Hi-Density Plate) to the RIVAGE PM10 console with V4.0 software. 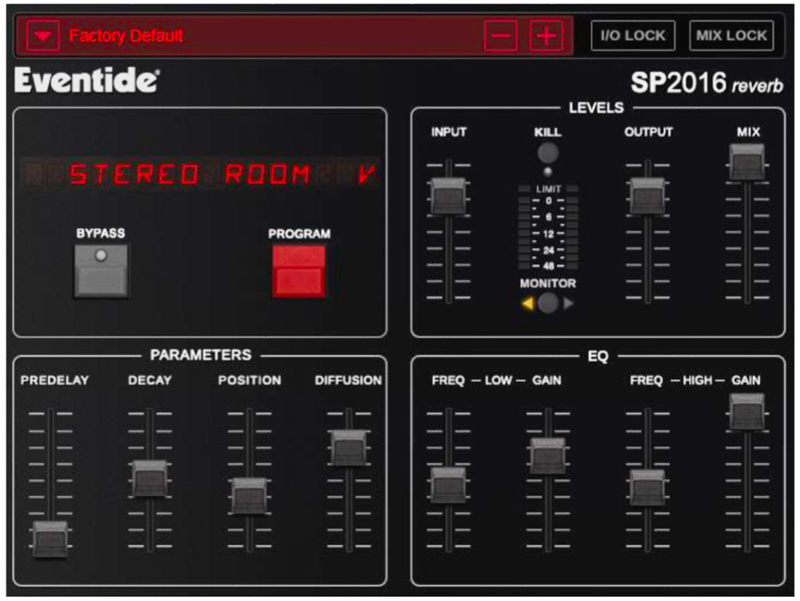 The colors, displays and buttons are also perfectly reproduced…

“Users will have a faithful recreation of the original rack processor using state of the art analog component modeling to capture the unique sound of this widely acclaimed reverb.”

With this upgrade, the RIVAGE PM series is also now capable of controlling the L-Acoustics L-ISA system. For each mono or stereo input channel, direct control of L-ISA objects or groups will be available directly through the RIVAGE PM control surface in use. With version 4.0, the RIVAGE PM7 will also see its processing capabilities increase, supporting 144 input channels and 96 output buses compared to 120 and 84, respectively, in version 3. 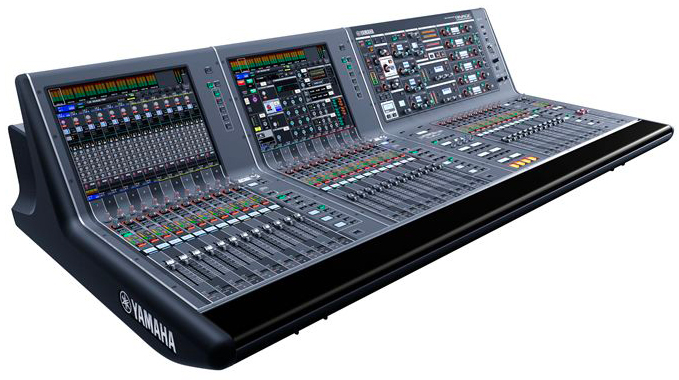 The RIVAGE PM7, the “all-in-one” model of the family, has not been forgotten; its capabilities have been considerably expanded.

Yamaha will continue to develop and add features to the RIVAGE PM series based on feedback from users in the field, and will continue to work with new partners to add high-quality plug-ins.

Taking it a step further

Although Yamaha does not provide information about the architecture or technologies used for the DSP engines of the RIVAGE system (processors, DSP, FPGA, …, or combination), we can nevertheless get a clear idea of the processing capabilities available. 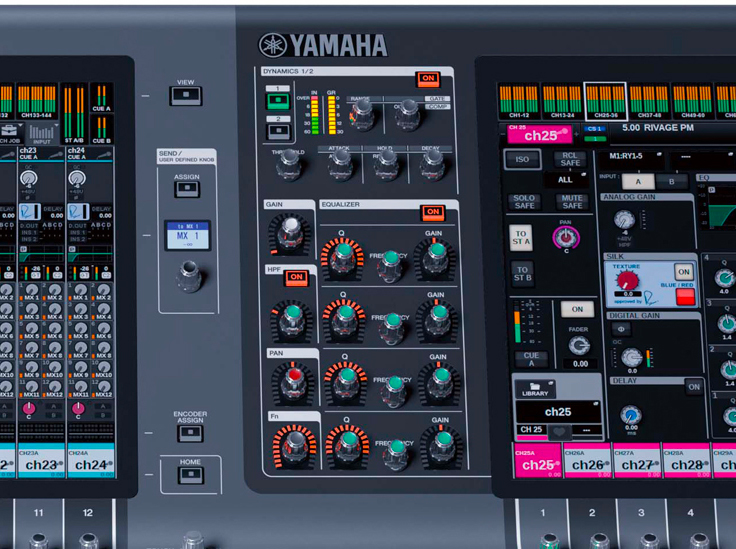 The control panel specific to the whole RIVAGE range, here with a mix of real and virtual keys on the screen on the right.

For all input channels (three possible patches: A, B and Virtual Sound Check), there is a 4-band parametric EQ plus two shelving filters (four different algorithms), two dynamics processing modules (a choice of two types of compressors, gate, de-esser, expander, ducking), up to eight insert plug-ins (from an embedded library of 50), an adjustable delay of up to 1000 ms and routing to stereo A/B mix, matrix, direct out, etc…

For each output channel, there is an 8-band parametric equalizer plus two shelving filters, a dynamics processing module (same selection as on the inputs), up to eight insert plug-ins, an adjustable delay of up to 1000 ms and mix to stereo, mix to matrix, mix to input routing, etc…

For the fifty plug-ins included (standard), the engines support, depending on the model, 384 or 512 instances (resources allocated in insert and send). For example, just to give you an idea of the requirements: 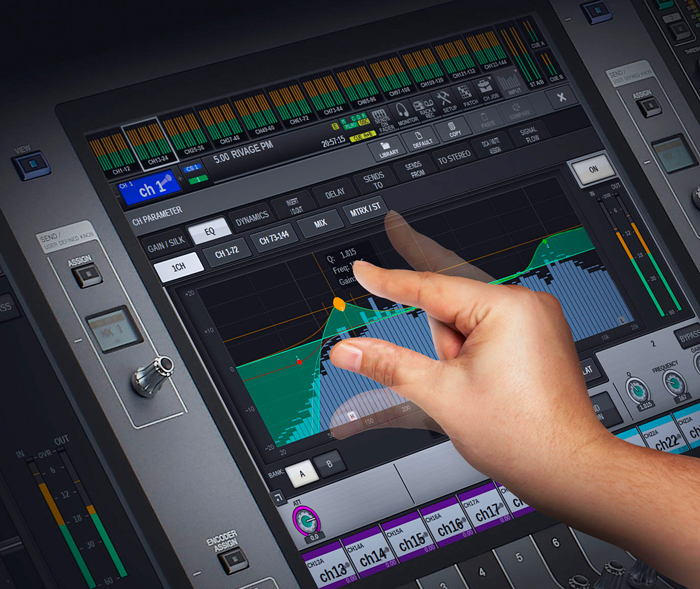 The 15″ touchscreens also allow functions such as pinch & swipe.

In addition, regardless of the plug-in instances, there are 48 31-band or 96 15-band graphic equalizers available.

The direct Ethernet connection between the control surfaces and the mixing engines must not exceed 100 m over CAT5. Only one port can be used (without redundancy).

In a system, it is possible to work either only in TWILANe, or only in Dante, or even in MADI, or with the two networks mixed depending on which racks are used and which HY cards are inserted in the DSP engine, knowing that, on the one hand, the latencies are different (network transport and conversion) between the two networks and the two types of racks and that, in the case of the RPio (TWINLANe) racks, even if a Dante card can be inserted, this only concerns the audio, not the control from the console.

128 inputs and outputs via MADI

144 inputs and outputs via Dante with SRC.

256 inputs and outputs via TWINLANe

We do not yet have any information about the pricing of the complete RIVAGE range (the engine of the PM10 system changes with the switch from the DSP-R10 to the two new DSP-RX and DSP-EX-RX) or about the possibility to see and try the new products, but we will keep you informed as soon as these are available.

In the meantime, check out the PM5 system in this short video: