This paper is available in Français too 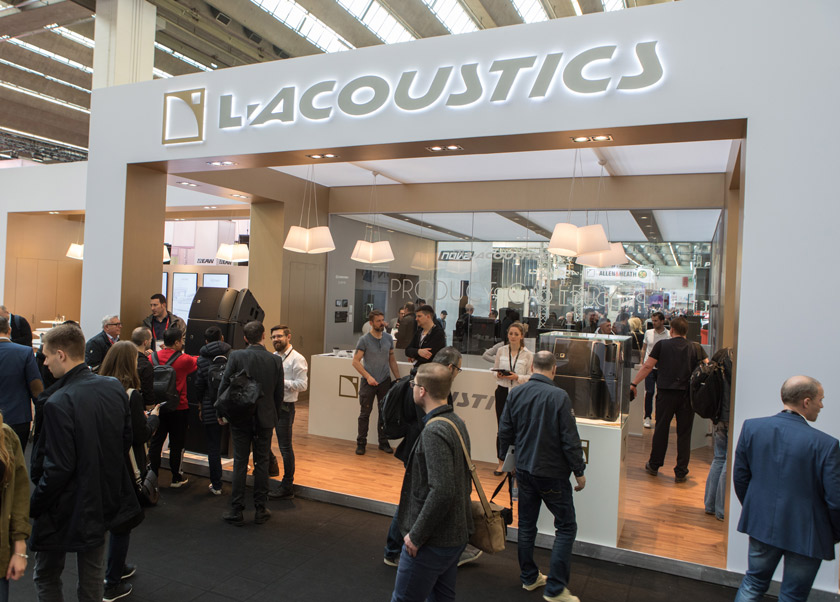 Nice surprise indeed! >two new 15” et 10” loudspeakers on board, each one available in Wide or Focus version, all this with a new subwoofer, the first 21-inch ever for L-Acoustics. The four speakers will begin with an A, hence A10 and A15, the subwoofer with KS, that gives KS21 to our ears.

The A Series, now complete, as it will be available end of this year when the A10 officially are as well.

ARCS is the acronym for Arrayable Radial Coherent System, a radially mounted coherent system. It is not designed as a variable curve speaker, but with a fixed curve, while incorporating the DOSC patent. 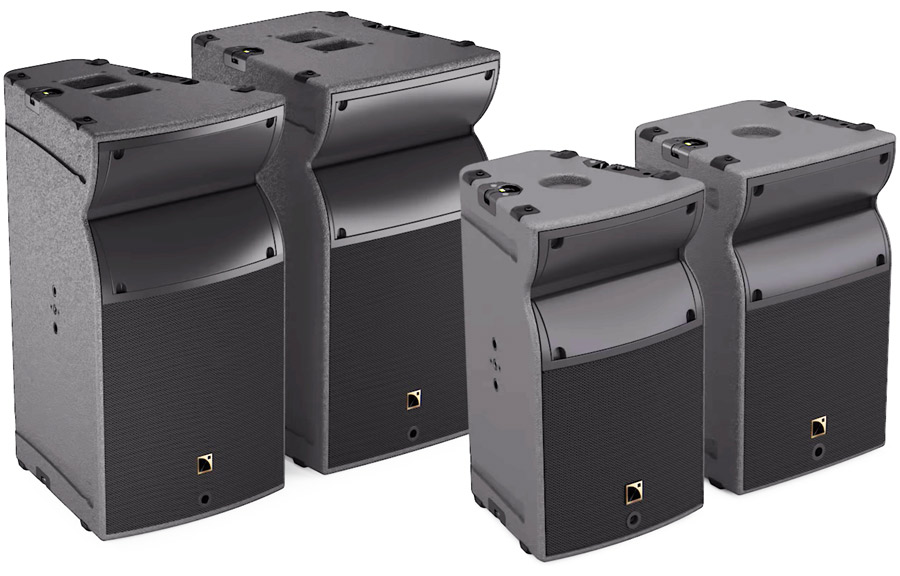 The roll-off is a classic one, with 3 dB per a doubling of the distance, while keeping the same tonal balance.
Years after the original ARCS, a version II was launched, then the Arcs Wide et ARCS Focus versions appeared in 2012 for more versatility and lower price.
Seven years later, here they go for a total refurbishment of the whole range.

We take advantage of the presence of Fred Bailly on the L-Acoustics stand at Frankfurt Prolight+Sound exhibition to ask him for a full review of the new products. 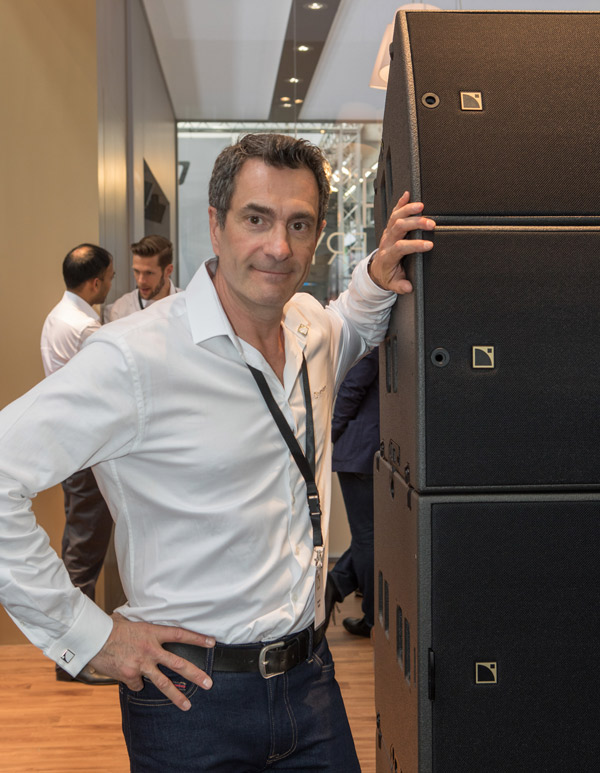 Fred Bailly on L-Acoustics stand with the KS21 + A15 stack.

SLU : The A Series were born quite quickly after the previous WiFo. Did the latter had to undergo a correction?

Fred Bailly (Touring Application Engineer) : ARCS WiFo is very popular indeed, but the weight of the units appeared to be a weak point, due to the ferrite magnets of the two transducers and a large enclosure, as well as a certain lack of accessories.
So we did improve all this, while adding the 10-inch model which is going to deliver the same SPL of the WiFo but more versatile, lightweight and in a much smaller size.

The A Series also opens the door to rental and production companies wishing to get professional gear simple to get to grips with, but upgradable with a few add-ons for larger events, and finally step into the L-Acoustics Network.

KS21, the first 21-inch to join the L-Acoustics inventory, still very compact. It features the successful laminar ports from the popular KS28.

SLU : Let’s start with your new 21-inch subwoofer. It can be driven by the LA4X as well as the LA12X, does this mean that it doesn’t comprise a transducer as “difficult to handle” as the 18-inch inside the KS28?

Fred Bailly : The two transducers inside the KS28 are wired in parallel mode, and thus are considered as a global 4-ohm load. The LA4X delivers the same power at 4 ohms and 8 ohms, as it is primarily designed for 8 ohms. This explains why the KS21, boarding a single 21” in 8 ohms, is working on one output of the LA4X, but a pair of KS21 can be loaded on one output of the LA12X.
This new range of speakers is not strictly limited to any processed amplifier in particular, for instance LA8 will also incorporate the A Series & KS21 presets.

SLU : Where does the KS21 fit in your range?

Fred Bailly : Reflex type. The speaker is positioned straight, it takes all the front space, only a small part is hidden by the wooden plate. It is only slightly bigger than a SB18.
The latter system is a double port load where we have energy gain at 90 HZ, whereas the KS21 is designed with a single port dernier. Whar we couldn’t reach with a 18″, we now have it with a 21″, we get more SPL with a simpler load. 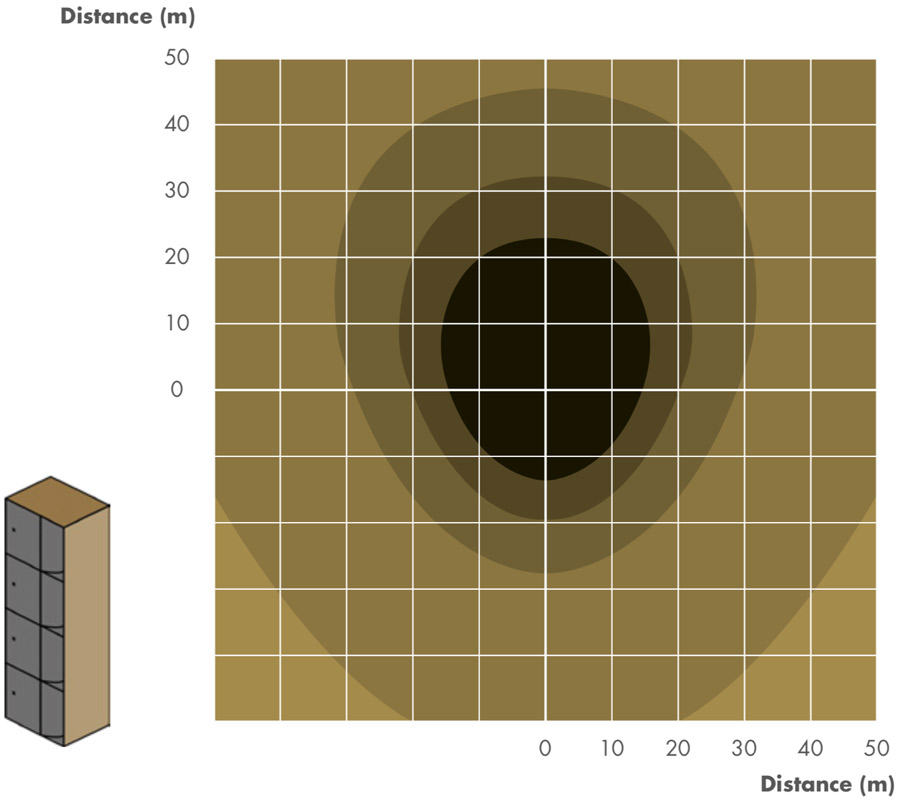 Stacked by fourn KS21 offers a slight upfront directivity. On this graph, each change of color figures a 3 dB attenuation. 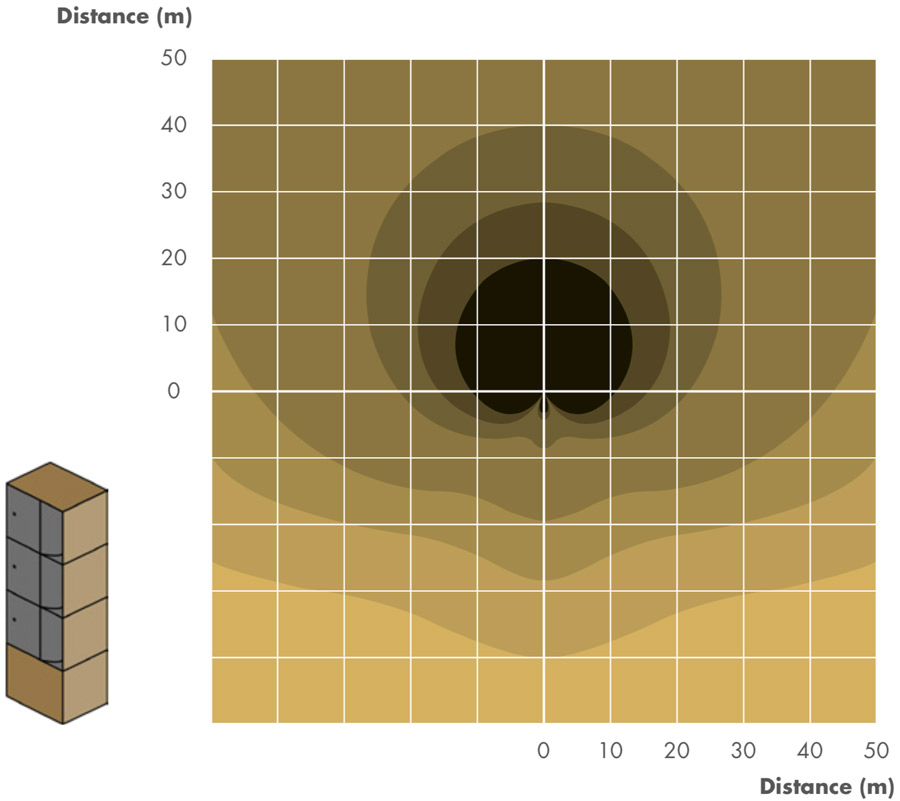 The same stack in cardioid mode. The loss in distance is not much compared to the “cleanness” and lack of side-spill. 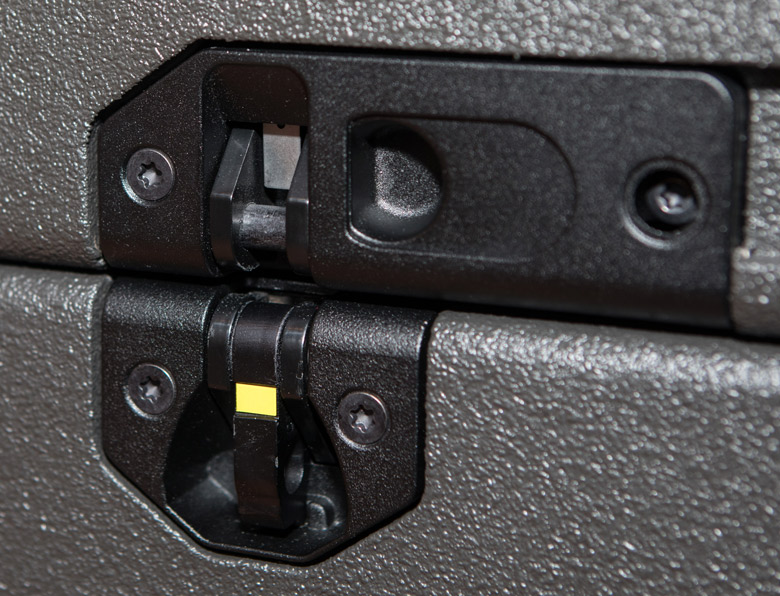 The hanging points are held in place by very powerful magnets. As always, to unlock the axis, you have to pull backwards once you’ve pressed the button. Very secure indeed.

We also kept the curved shape of the half of the port of the KS28 with a design very close to of our standard sub’s one. The difference is that we went for a bentwood like on the X Series, so it’s as lightweight as our wedge monitors (49 kg). We thought about the mutual hanging between boxes with quick, simple and sturdy hinge fittings, lockable when deployed or at rest. 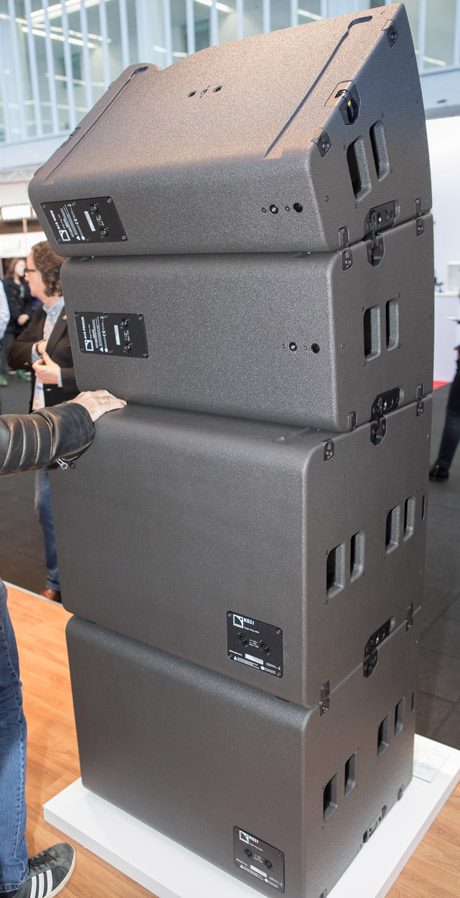 The A15 stack shown on one side at Frankfurt exhibition. The difference in loading volume for the 15″ is easy to observe between the Focus and (on top) the Wide versions, same for the curve, with 10° for the Focus and 30° for the Wide.

SLU : Is this subwoofer versatile?

Fred Bailly : it is specifically designed for the A15 and the up-and-coming A10, but you can use it with another speaker if you wish. It is fitted with a hole for mounting pole for upper speaker.

SLU : Does the 21” have similarities with the transducer in the KS28?

Fred Bailly : No, it has nothing to see, it’s not at all the same product and the internal tuning is totally different. KS28 goes a bit lower and has a larger internal load.

SLU : How are the A15 and A10 speakers positioned in the L-Acoustics existing range?

Fred Bailly : As previously with WiFo (Wide and Focus, the former ARCS models) there are two different angles available. A15 Focus has an angle of 10° whereas the ARCS Focus was 15°, and the A15 Wide remains with a 30° aperture.
The principle is a 15” or a 10” with the same DOSC-loaded 3″ driver and L-Fins magnetic guides to vary the directivity between 110° and 70°, plus the option to use an asymetric mode. These loudspeakers only exist in passive mode. 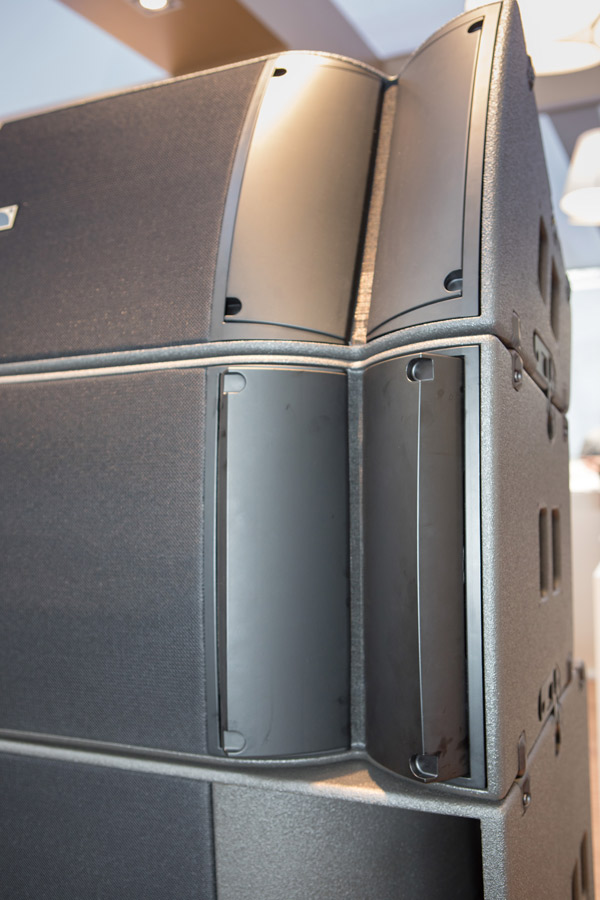 The L-Fins on two A15s. On the Focus one below, they are in 70° mode. On the Wide unit above, they’re configured in nominal 100° mode. Asymmetrical combinations can be achieved as well.

The horizontal directivity is the same on an A15 Wide (110°, 70°, and assymetrical) with 3 dB less SPL because of the bigger vertical directivity, as we switch from 10° to 30°, and the low frequencies have smaller load, as the case shape, narrower at the back. 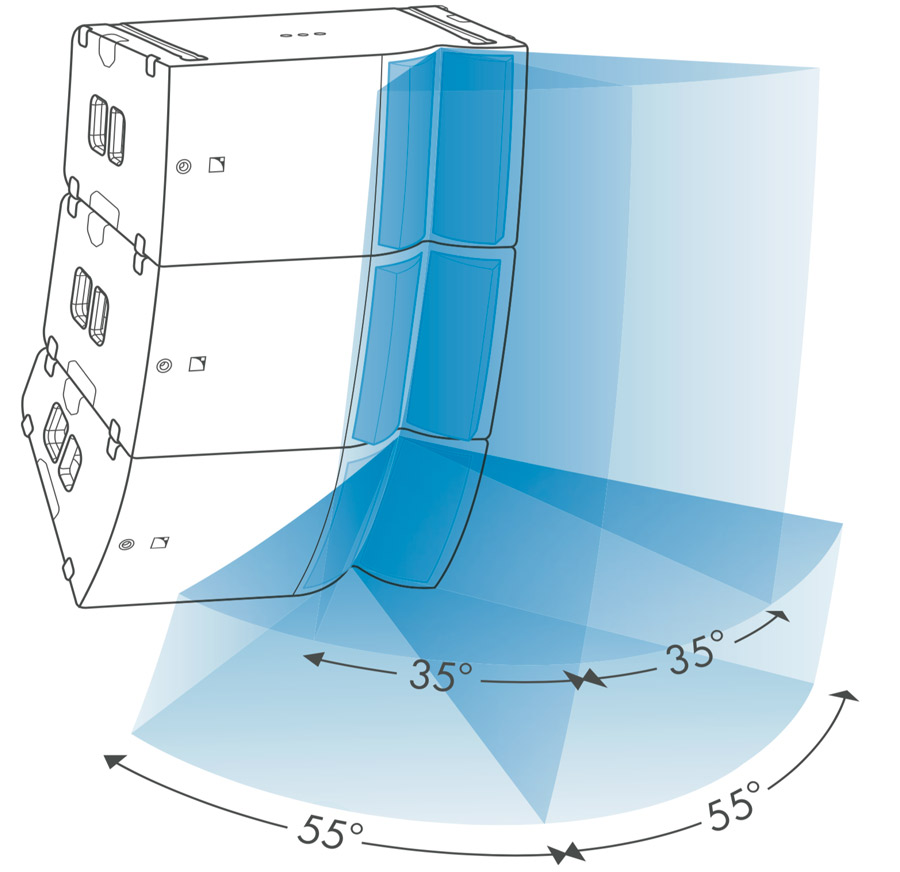 One way, amongst others, to configure a left/right by tightening the upper Focus at 70° to help get a longer throw without touching reflective surfaces, while the Wide box below is in 110° mode to give a better nearfield coverage in the pit. 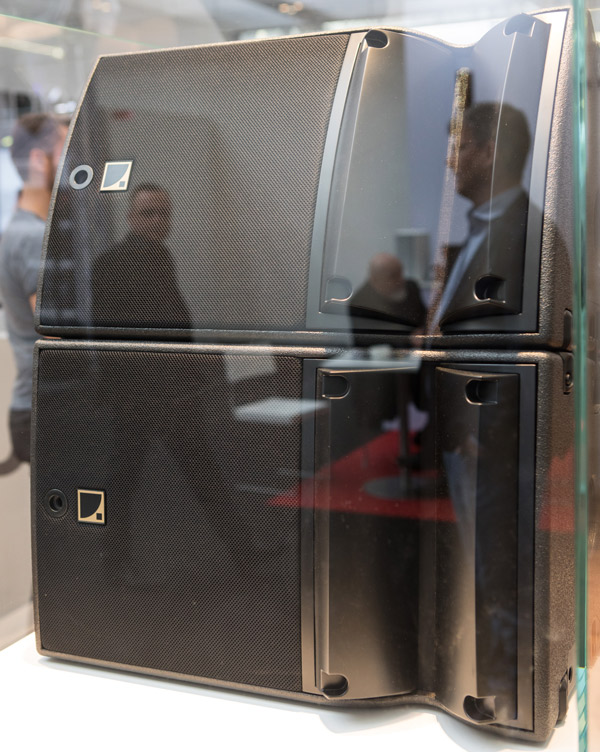 A10 Wide and Focus units installed under a plexiglas cover to symbolise its long-term availability… and to hinder photographers ;0)

SLU : How could you gain some more SPL with A15 Focus, compared to ARCS II, your “big” bi-amplified model?

Fred Bailly : The preset is not made the same way. ARCS II was mainly designed for “dB(A) SPL”, whereas A15 and A10 are designed to comply to our variable curve products, with a sonic contour similar to K2. When comparing a stack of 5 K2 with 4 A15 Focus, you get a very similar curve, with only SPL difference.

SLU : What will happen with ARCS WiFo and ARCS II, then?

Fred Bailly : The market will decide. These three models are still on offer. This reminds me of what happened

Fred Bailly : This will leave us some time to finish the development on the A10. We planned to launch first the A15, and then the A10, and we’re sticking to that. the smaller model will be available 4th quarter of 2019 with all the accessories for vertical or horizontal or array hanging, and these need a complete refurbishing. 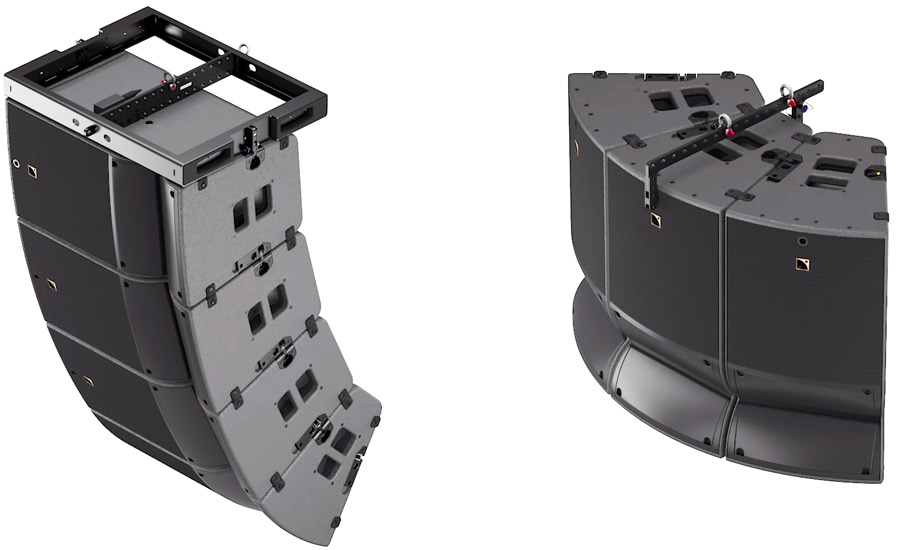 Two ways of using and hanging A15s. Soundvision will be vital more than ever. Version 3.1 already includes the A Series and KS21 data.

SLU : What is the market these new products are aiming for?

Fred Bailly : All small to mid-size entities not needing variable curve line arrays. The A Series, and especially the A15 in 70° mode, can be stacked and cover up to 45 meters, a 4,000 audience, and at the same time a single pair could be used for 50 people without sub.

SLU : How many presets did you design for the A15?

Fred Bailly : Only one, despite all the possible combinations. It is obvious that, depending on the number of enclosures, their positioning and the use of their L-Fins, you might have to adjust some levels, but all these tools are available in the Network Manager. 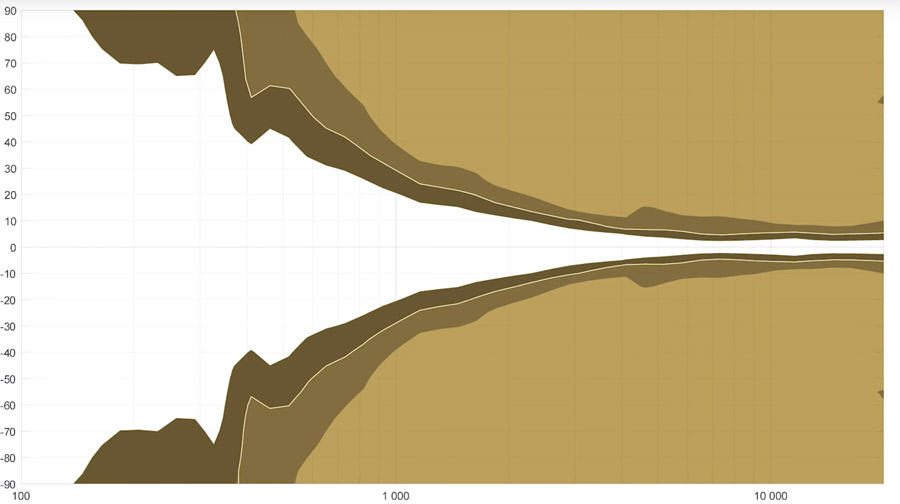 The vertical polarity of the A15 Focus… 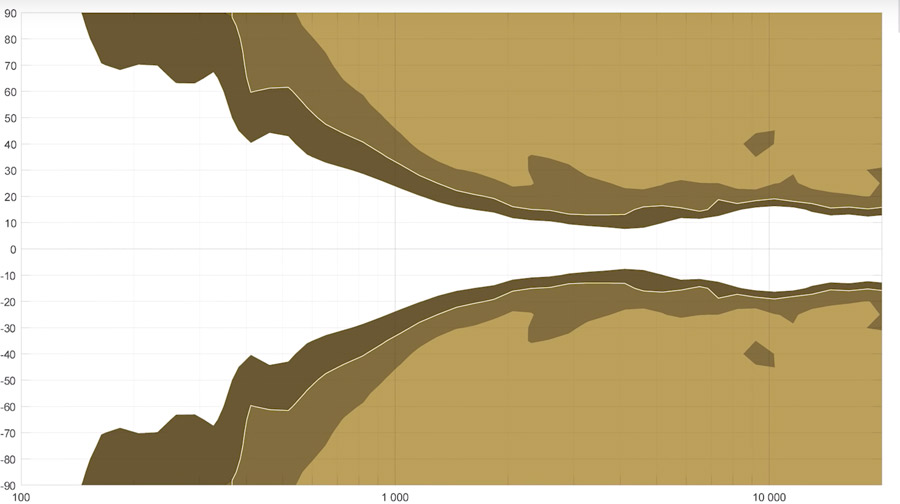 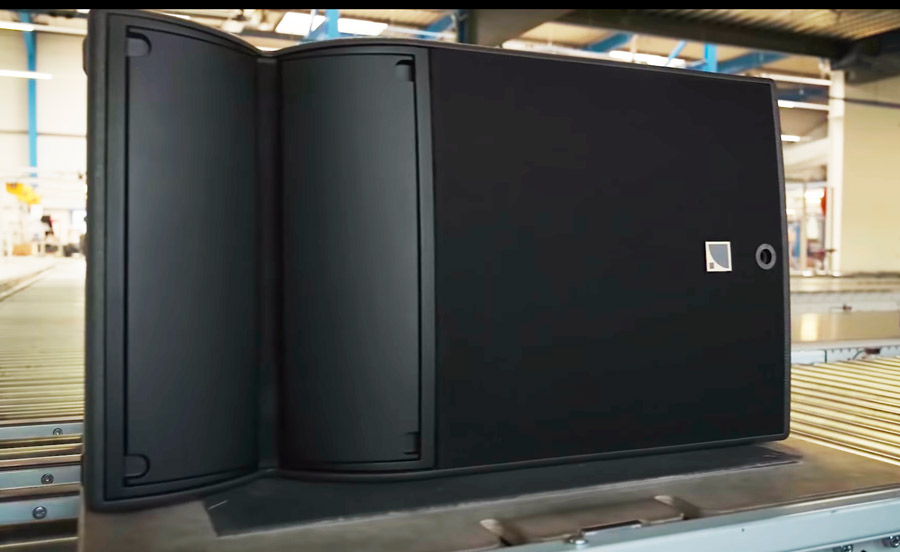 One A15 on the assembly line in Marcoussis.

The two A15 Focus and A15 Wide constant curvature enclosures and dedicated KS21 subwoofer are available early may 2019. For both A10 models, you’ll have to wait until autumn 2019 (october/november), even though you could have a preview of them under a plexiglas cover in Frankfurt.

We’re going to listen ASAP to this new range in the musical forest near Marcoussis, and we’ll post our imporessions like we did for ARCS WiFo … 7 years ago! OMG how time flies … You could add that 144 dB SPL for the A15 Focus and 141db SPL for the A15 Wide, with a widened bandwidth, doesn’t make ARCS II look younger at all, with its 142 dB SPL needing two amp channels…

More information on the whole ARCS Series on the L-Acoustics Website.