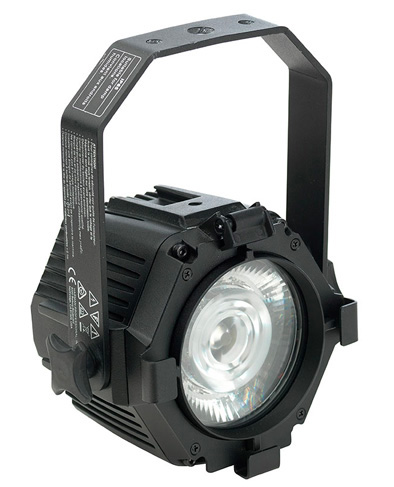 Last year, while strolling around Prolight+Sound, our curiosity was piqued when we discovered an array of small, versatile and punchy LED sources.
The Atomic Dot, available in cool white or warm white versions, each with dynamic Aura effects, is controlled like a video pixel by the P3 processor, as are all the luminaires in the Martin VDO family.

We met with Yohan Ory, lighting application engineer at Algam Entreprises, for a guided tour of this little unit.

When unpowered and without accessories, the VDO Atomic Dot looks just like an LED PAR30. It is octagonal in shape, 17 cm wide by 15 cm long, and weighs 2.2 kg.

Around its perimeter, four diametrically opposed slots are dedicated to the attachment of accessories. One of these accessories allows you to hang up to 14 Atomic Dot units vertically from a single rigging point. The all-aluminum outer shell is interspersed with integrated vanes that act as heat sink radiators. The Atomic Dot has no forced ventilation and is 100% silent. 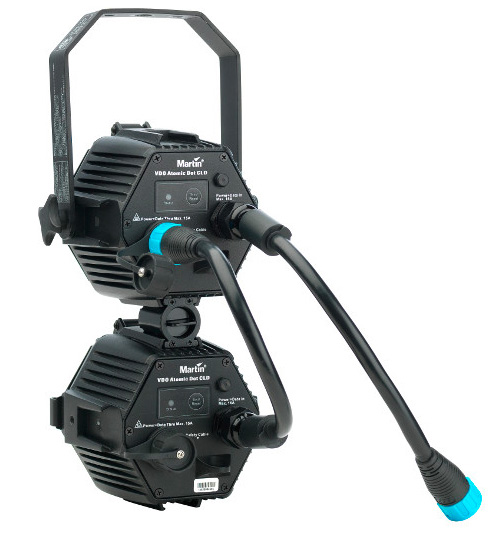 The rigging and and wiring configuration of two Atomic Dot units. 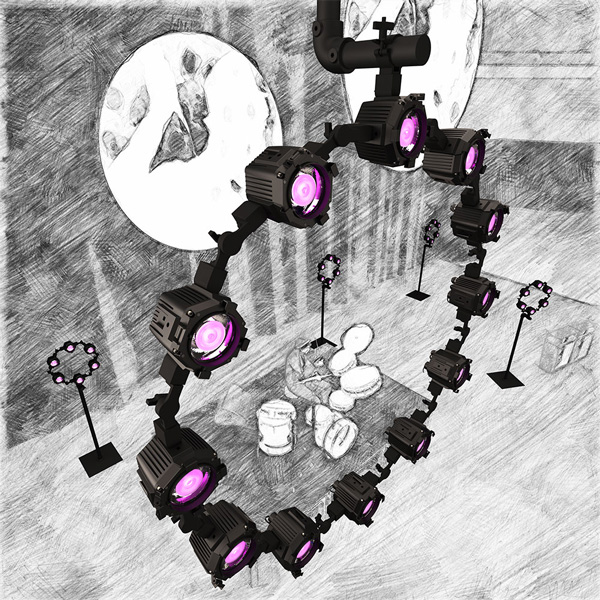 An example of one of the many ways in which multiple Atomic Dot units can be configured, mounted, or suspended (photo: Martin).

On the rear panel, a covered socket is next to a large watertight socket and its input cable, which combines the control signal and the power supply. 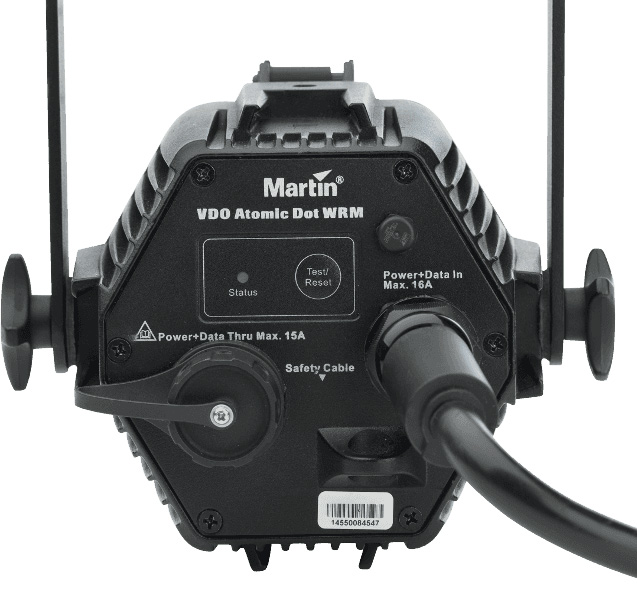 Above the input cable, you can see the valve used to pressurize and verify the airtight seal of the unit.

In addition, there is a test/reset button, an LED to indicate the operational status of the unit, a lug for attaching the safety cable, and a valve for pressurizing and testing the unit for leaks.
Yes… because this fixture is designed with an IP65 rating for use in a wet environments. We notice the absence of a display and keys for accessing a control menu. It is necessary to use the P3 processor or RDM to address the projector.

On the front, firmly secured by a metal ring (which also accommodates filter holders or shutters), there is a beautiful lens that I would describe as hybrid in its design and visual aspect.
Around its perimeter we can see a multitude of small transparent facets, while in its center we find several concentric rings, typical of a Fresnel lens. The unit gives a general impression of solidity, thanks mostly to its all-metal chassis. 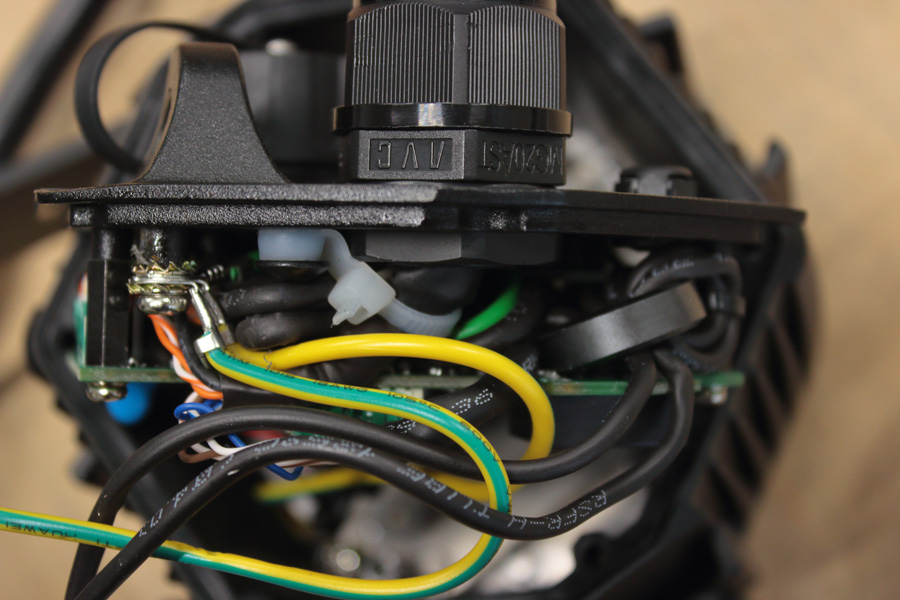 The internal space seems a bit restricted to comfortably accommodate the largest cables.

Let’s go back to the rear of the Atomic Dot to start the disassembly. We remove the six Phillips-head screws that secure the rear panel to the body of the fixture.
This plate seems to me relatively thin; we will have to be careful when reassembling it, in order to avoid deforming it when tightening it, which would jeopardize the overall waterproofing of the product.

We then can see the inside of the fixture. Attached to the outer panel with spacers, a first double-sided circuit board hosts some of the components dedicated to signal reception. Between this PCB and the external panel, several cables unfortunately seem to be pressing heavily on the components of one of the two layers of the board. On the front, around the perimeter of the casing, there is a gasket with several lips designed to seal the fixture.

Now, we can directly access the motherboard of the unit, on which are soldered the principal active components of the electronic control circuit, namely the main microcontroller, a Texas Instruments RM46L850, which integrates the processors, flash memory and RAM. 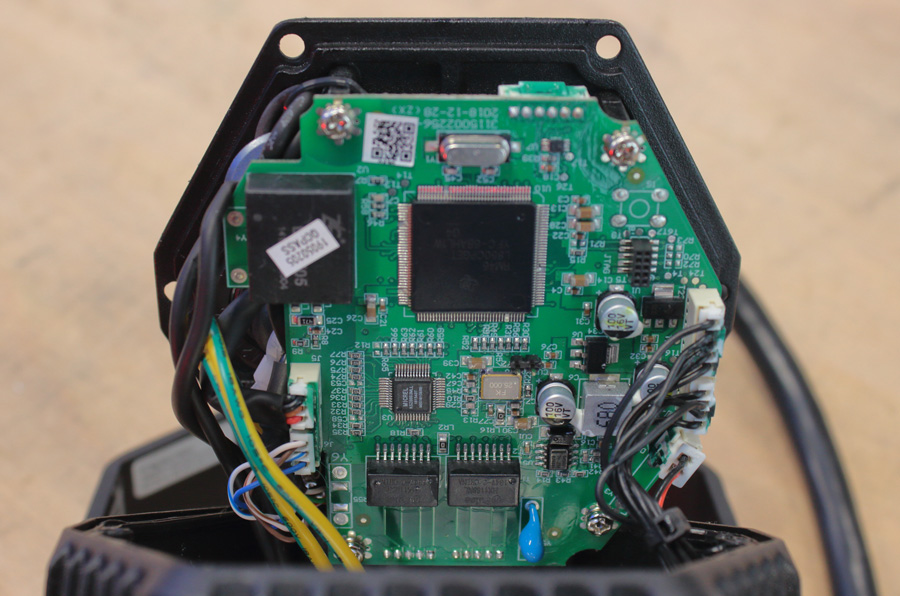 The motherboard of the Atomic Dot, with the main Texas Instruments microcontroller in the center.

It sits alongside a Microchip KSZ8863 dedicated to Ethernet interfacing, two voltage converters, quartz crystals dedicated to the microcontrollers and a multitude of surface-mounted passive components.

The design and construction are of high quality. The small connectors dotted with green glue betray a more typical Asian assembly. Under this PCB is the power module, composed of a switch mode power supply surrounded by a metal shield.

On this side of the fixture we also find a small bag of silica beads used as a dehumidifier. In after-sales service, when opening the fixture and reassembling it, this bag and the cover seal are systematically replaced. To finish the reassembly, the technician carries out a leak test using the valve provided for this purpose.

On the optical side, you only need to carefully remove a few screws to get to the lens and the 17 Osram LEDs: a powerful central LED, a first ring of four RGB LEDs and a second ring of twelve RGB LEDs. 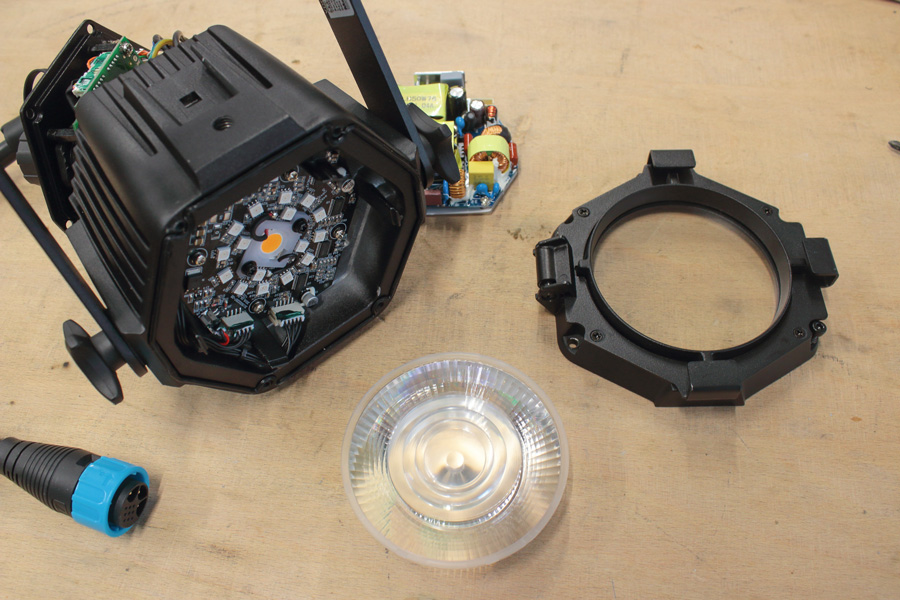 The various elements disassembled: the source, the front protection that serves as an accessory holder, the lens, the power supply, as well as the hybrid cable.

Only the central source is directly coupled to the body of the fixture, via two screws, probably for the purpose of heat dissipation. The others are soldered on a PCB that also includes some active components, like the LED drivers with 12 channels each (4×RGB), driving the 16 RGB LEDs. 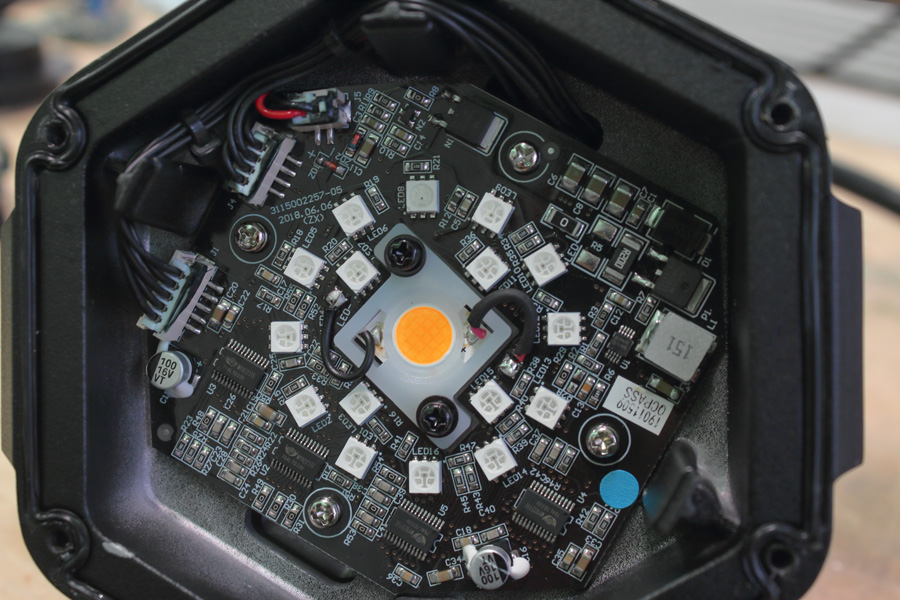 The LEDs, here seen with the lens removed. In the center is the COB white LEDs surrounded by the 16 RGB diodes.

Finally, we get to admire the beautiful hybrid lens placed between the LED sources and the output glass of the fixture.
Joel explains that, unlike the Sceptron, where the LEDs are cast in resin, here the engineers have made sure that all the elements are easily removable and replaceable.
We can only approve and encourage this type of initiative!

The watertight box dedicated to merging the different signals (DMX, ethernet and power supply) into the hybrid cable used by the projectors.

We take a quick look at the box (which is also waterproof!) that combines data and power supply, allowing you to connect an Ethernet or DMX cable and a power supply on one side, and to connect a hybrid cable to the fixtures on the other side.
It is solely used for combining the different types of signals.

The 16 RGB LEDs, without the lens.

We bring the sources up to full power and we go through the different colors.
On the whole, it’s quite satisfactory, with a slight reservation about the blue, which, for my taste, could have been a little deeper.
The mixtures are nice, both pastels and saturated colors.

The white generated with the RGB sources all on at full power is, as usual, not perfect, and it will obviously be possible to refine it by adjusting the levels of the primary colors. My personal suggestion for a possible version 2 of this fixture: the addition of white to the RGB LEDs of the Aura effect, would offer an even greater variety of colors. Some colors generated by the Atomic Dot. Please don’t misinterpret this, the projection on a wall is purely for informational purposes, the unit is not designed for color washes, but for its pixel and Aura effects!

Let’s move on to the dynamic effects, the forte of this little fixture. As mentioned above, each source can be operated independently, which can make this little Dot quite greedy in terms of DMX channels, with a maximum of 64. From the console, we choose to send pre-programmed macros to facilitate the work of the console operator.

The pixels come to life before our eyes with a multitude of different effects. Having at our disposal several Atomic Dots, one of which has been stripped of its lens, we can observe the raw result of the pixels and their colors.

By positioning a frost on the outer filter holder, the pixel combinations transform into psychedelic visuals on the filter, further increasing the effect potential of the unit. 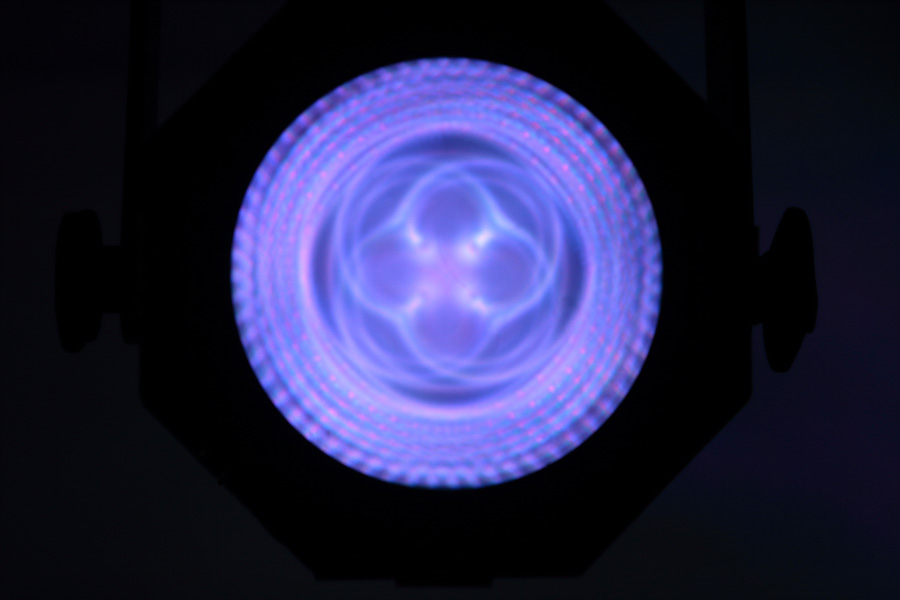 One of the psychedelic projections made possible by the application of a frost filter.

With the Aura effect off, a black machine on the floor begins to hum gently in the room: time for some haze! Now it’s time for the powerful central LED – tucked behind the Fresnel section of the lens – to show its stuff!

We crank the dimmer all the way up: it doesn’t fool around! The little luminaire, which had been subdued until then, hits us with a barrage of photons.
Playing with the dimmer and seeing the beam it generates, we can immediately imagine the additional possibilities that it offers. In addition to the blinder effect, the Atomic Dot produces a nice 11° wash. Another feature of the series: the unit is available in two versions, with different color temperatures for the central diode. The Atomic Dot in “beam” mode, using only the central LED in haze: from left to right, cool white, warm white, and cool white with a frost filter.

The warm white version, designated WRM (and CLD for cool white), would almost be confused with a conventional source, as this projector offers the possibility to simulate the dimming curve of incandescent lamps. The result is convincing, and we can already envisage the use of the Dot on stage, on the floor or on a pole, to highlight a singer or a musician. The two versions with different color temperatures: on the left is a warm white that imitates a conventional source very well, while on the right is a neutral cool white.

After a bit of fiddling with the console, this powerful LED turns into a strobe, again quite effective, like the other products in the Atomic range. This effect is very interesting and original in warm white, and obviously successful in cold white. An additional parameter emulates the flicker of a xenon tube when the strobe rate is pushed to its highest limits.

It is worth noting that the strobe rate can be varied precisely between 0.289 Hz and 16.667 Hz. Decidedly, this little Atomic Dot has a lot of potential! Unfortunately, we do not have measured values to report regarding the luminous flux of this central source. We can only report that Martin declares a maximum total flux of 3,000 lumens. 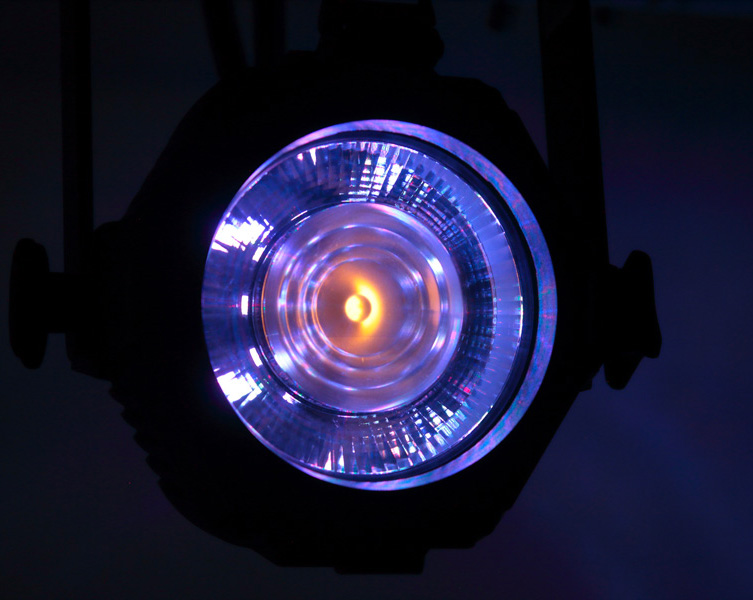 The central LED (here in the warm white version) at a very low intensity, combined with a matrixed Aura effect.

The combination of the effects offered by the dedicated Aura LEDs and the powerful central source makes Martin’s newcomer very versatile on stage or on TV sets for close-up shots.

The Atomic Dot is likely to be used in arrays, thanks to the power of the P3 processor, as well as working as a point source. Its multiple mounting possibilities and accessories allow for infinite possibilities of installation, both indoors and outdoors!

The list price in France for the Martin VDO Atomic Dot is € 536 excluding VAT, as stated on the Algam website. 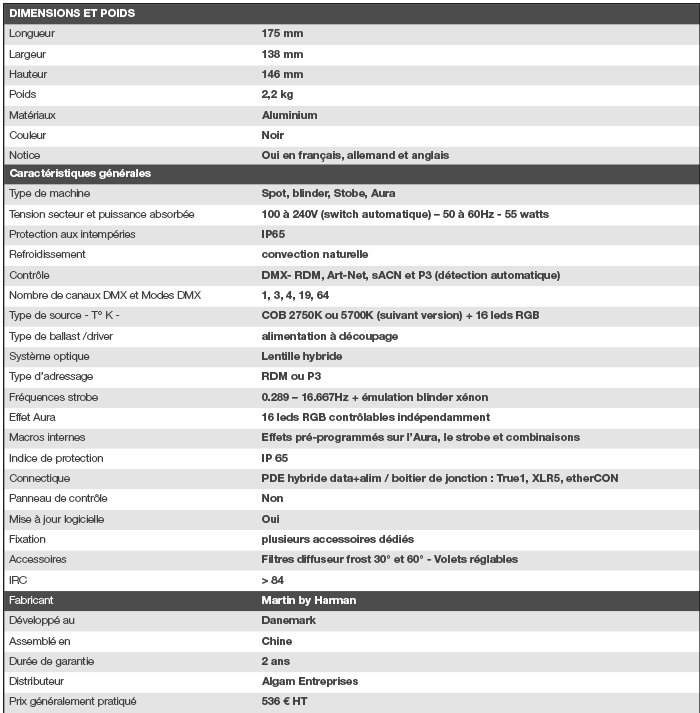