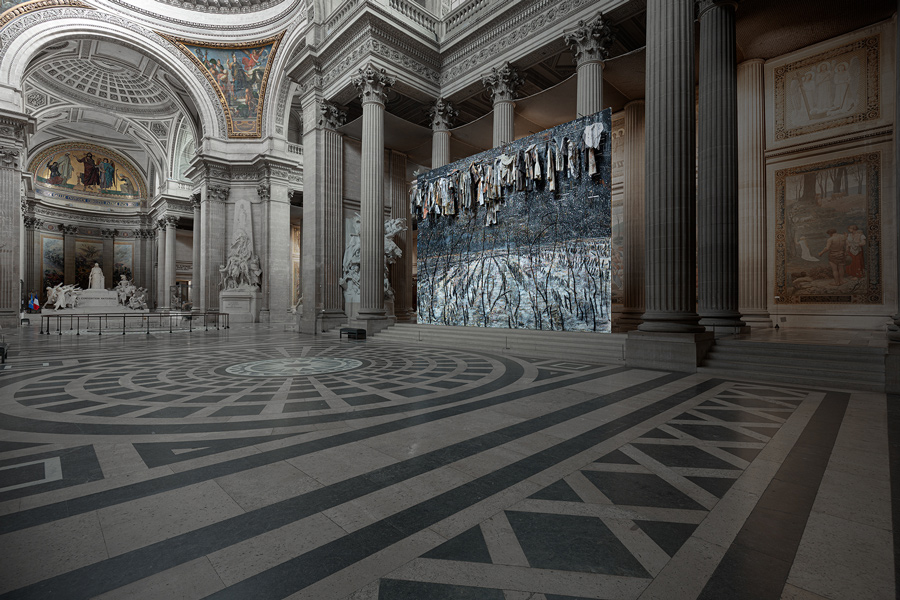 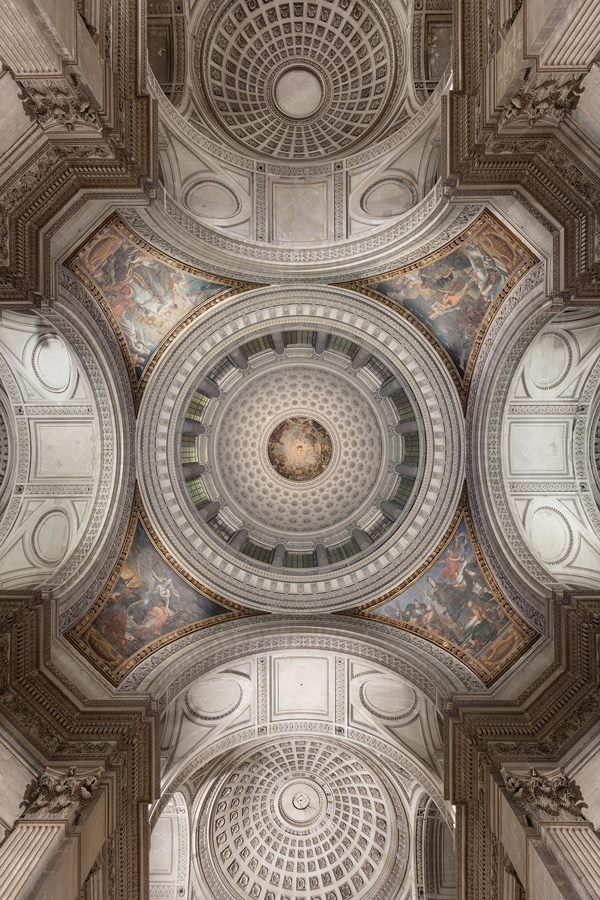 A very nice view of the internal central dome and domes. Do not look for one of the 70 speakers, the integration has been carried out with extreme care.

On November 11, 2020, a unique sonic technology made in France by Amadeus was revealed in a new artistic work during the ceremony presided over by Emmanuel Macron, President of the French Republic, to celebrate the renowned French writer Maurice Genevoix as he was entered into the Panthéon.

Within the scope of the Armistice Day commemorations, French author Maurice Genevoix, who wrote the tetralogy Ceux de 14 (“The Men of 1914” about World War I), joined other luminary writers such as Voltaire, Rousseau, Dumas, Hugo, and Malraux, along with revered figures from culture, science, and politics in France’s secular temple, the Panthéon

For the celebration, the President of the French Republic commissioned a work from two major figures of the contemporary art scene, the German painter and sculptor Anselm Kiefer, and the French composer Pascal Dusapin. This is the first public commission for the Panthéon since 1923. 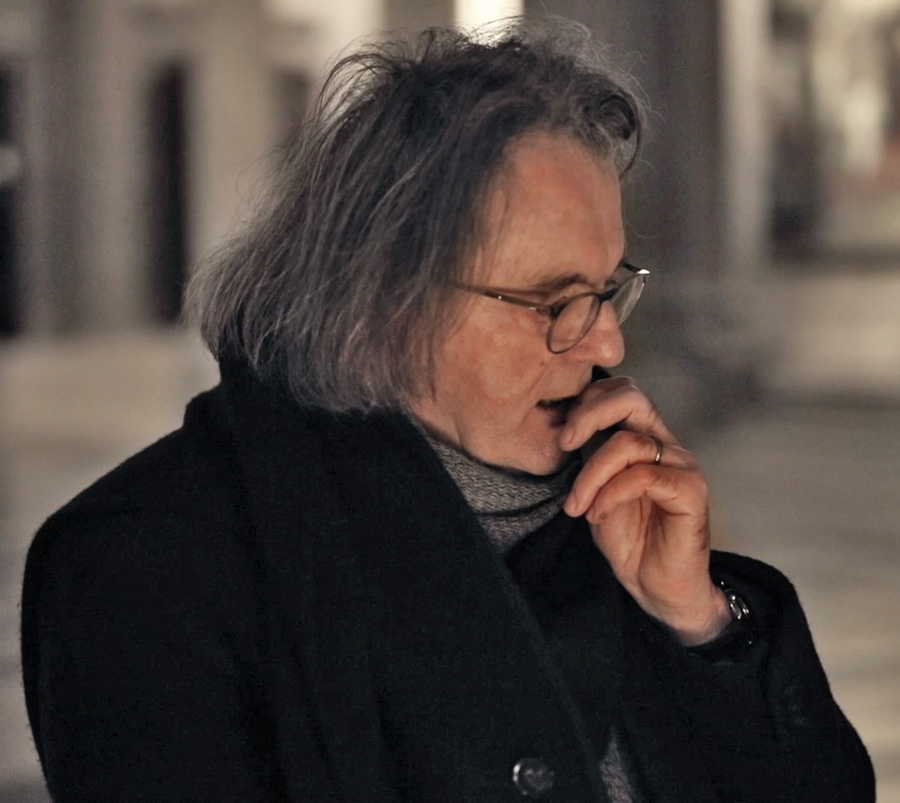 Dusapin’s creation, In Nomine Lucis, is a piece for a musical ensemble of singers, recorded by the French chamber choir, Accentus, at the Philharmonie de Paris concert hall.
To bring a more intimate human connection with the Great War into the Panthéon, nearly 15,000 representative names of soldiers who died for France have also been read and recorded by the French actors Florence Darel and Xavier Gallais. Visitors to the Panthéon will hear names spoken as they walk through different parts of the expansive building.
“I wanted to make the stones of the Pantheon sing, to create a huge ‘vocal lung’ where everyone will hear different echoes of its past, and of its history,” said composer Pascal Dusapin. You have to have an eye. Five of the eight C15s as integrated into the dome.

To support the great new musical work, a bespoke and unique sound system was designed and installed within the Panthéon. A total of 70 loudspeakers, designed and manufactured by French audio company Amadeus, are mounted around the transepts and at the dome-ground, which reaches more than 35-meters in height. The speaker enclosures, being coated in natural stone, have been made invisible, becoming an integral part of the monument. 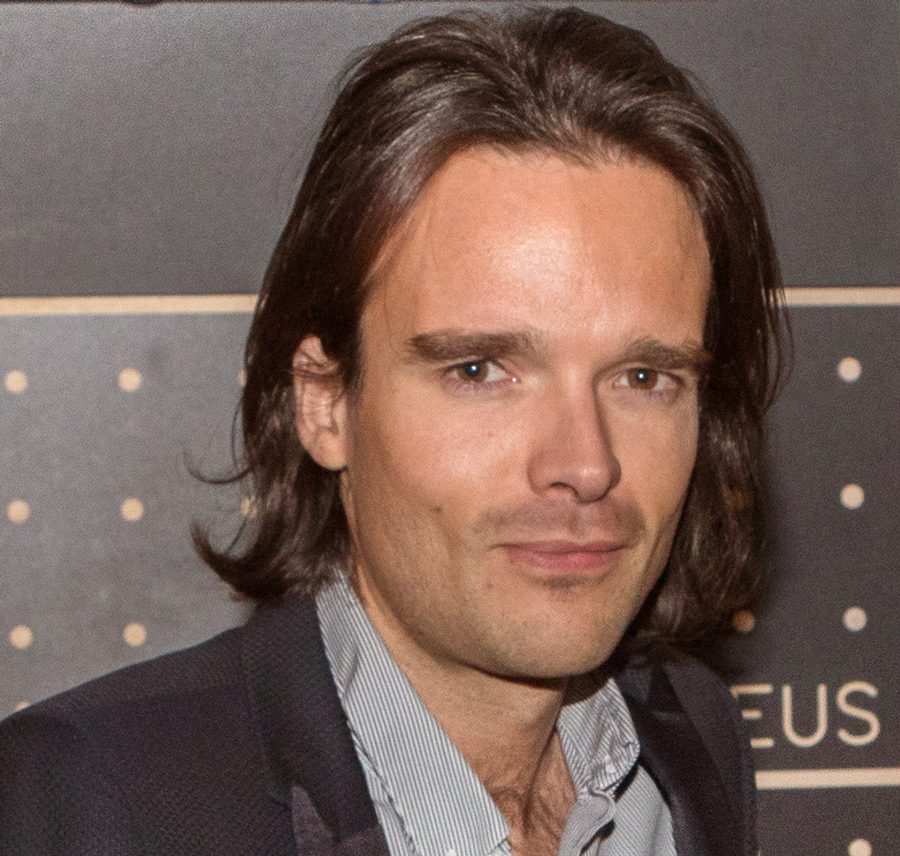 “Amadeus became a space where technological innovations with arts and crafts, combine and complement each other,” said Gaetan Byk, Marketing Manager at Amadeus.
“We take real pleasure in constantly surpassing and renewing ourselves, in exploring materials and technologies in all their forms, without limit. These eighty stone-finished speakers, forming part of the Monument, are the purest expression of our know-how and the values we defend.”

The electroacoustic system is controlled by a sound spatialization processor called HOLOPHONIX. “The HOLOPHONIX processor enables the sound spatialization of the different choirs through its various onboard algorithms, in two or three dimensions,” stated Thierry Coduys, Director of Technologies for the project, and a technical collaborator of Pascal Dusapin for many years. 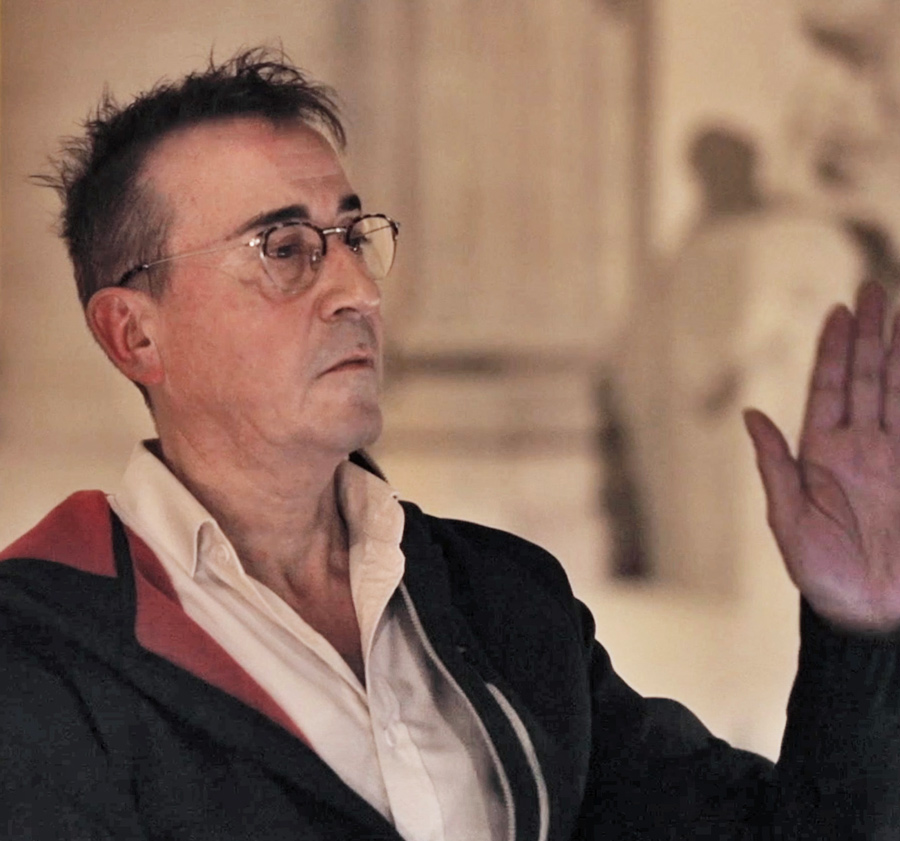 Like an aerobatic pilot repeating his arabesques, Thierry Coduys accompanies the sound with a gesture.

“The spatial programming, the position of the choirs, their trajectory, as well as the other events that compose this ‘electroacoustic score’ are managed through a graphic computer sequencer, called IanniX.
The HOLOPHONIX processor receives, interprets and translates these millions of temporal and spatial messages to make them perceptive,” added Coduys, describing the new immersive audio experience at the Panthéon.
Designed by the Amadeus company, in collaboration with IRCAM Institute, the HOLOPHONIX immersive sound system has also been selected by several performance venues, many among the most famous and prestigious in France, including Comédie-Française, Chaillot National Theater, and La Scala (Paris). 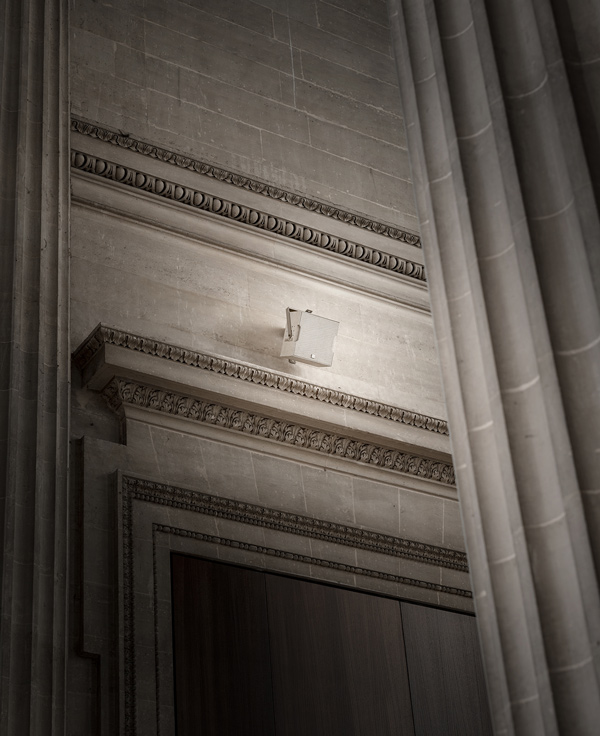 One of the very rare speakers visible, here a C6.

Designed for live sound spatialization and immersive experiences, the HOLOPHONIX processor brings together several different spatialization techniques including Wave Field Synthesis, High-Order Ambisonics, Distance-Based Amplitude Panning, and more, enabling intuitive placement and movement of sources in a 2D and/or 3D space.
“I worked closely with Thierry Coduys on selecting the most appropriate algorithm to accurately render the trajectories he wanted to apply to the sounds. 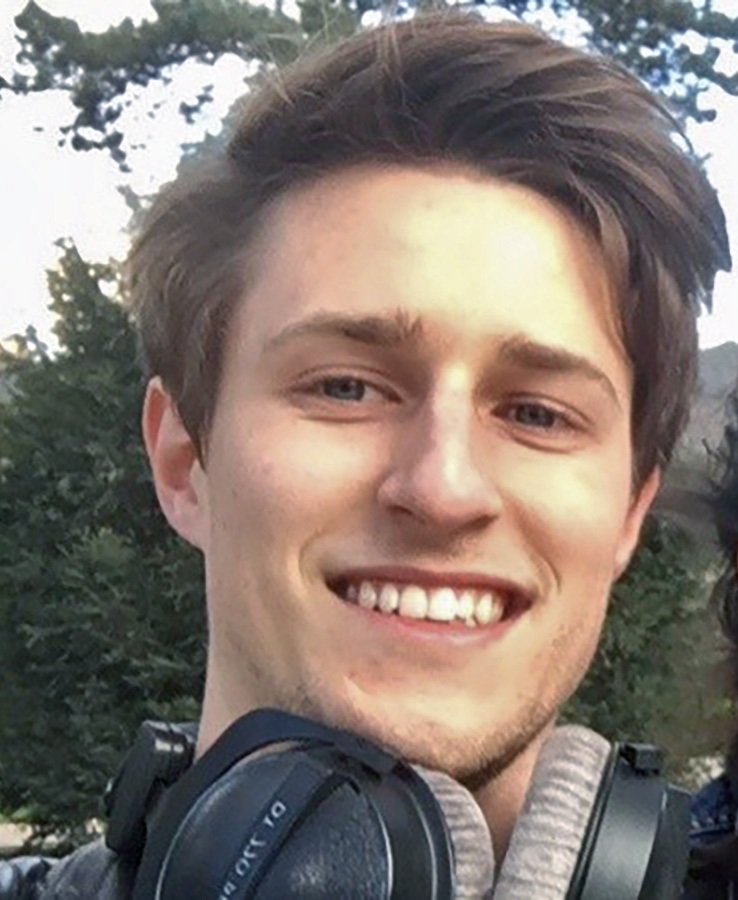 We tried several solutions offered by HOLOPHONIX, and finally, we selected the ‘k-nearest neighbors’ algorithm (k-NN),” said Clément Vallon, member of the Technical Team at HOLOPHONIX.s.
KNN selects the k loudspeakers closest to the source position and applies level differences between them. The gain differences are calculated based on the distance between the source and the selected loudspeakers. The quantity of speakers k is chosen by the user with the ‘neighbors’ parameter. KNN allows a very flexible spatialization, as the loudspeakers can have any layout.
“It is an algorithm that is not used much for immersive concerts, but it offers a great flexibility, which was perfectly suited to the geometry of the building and to the rendering desired by Thierry Coduys and Pascal Dusapin,” added Clément Vallon. 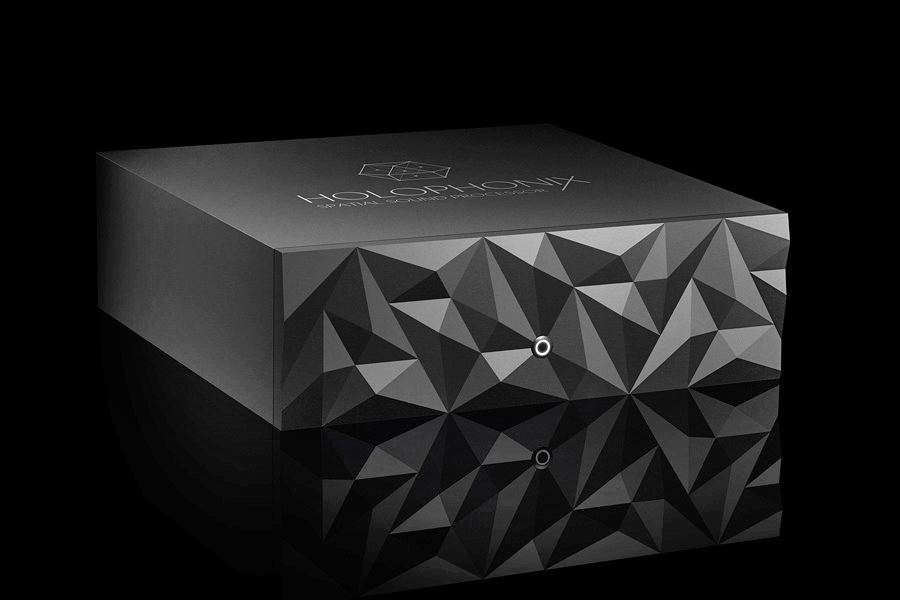 Holophonix. 128 in and out in Dante and all that exists or almost in terms of algorithms with a graphical interface at the height of the audio rendering.

“I mainly designed tools allowing the spatial writing of ‘In Nomine Lucis’ creation. Pascal Dusapin and Thierry Coduys wished to create a unique and living experience for the listener. By adding a motion dimension to the choirs, visitors are invited to explore the monument in a different way,” stated Adrien Zanni, who recently joined the HOLOPHONIX Technical Team to design and develop ‘spatial writing’ tools and languages. 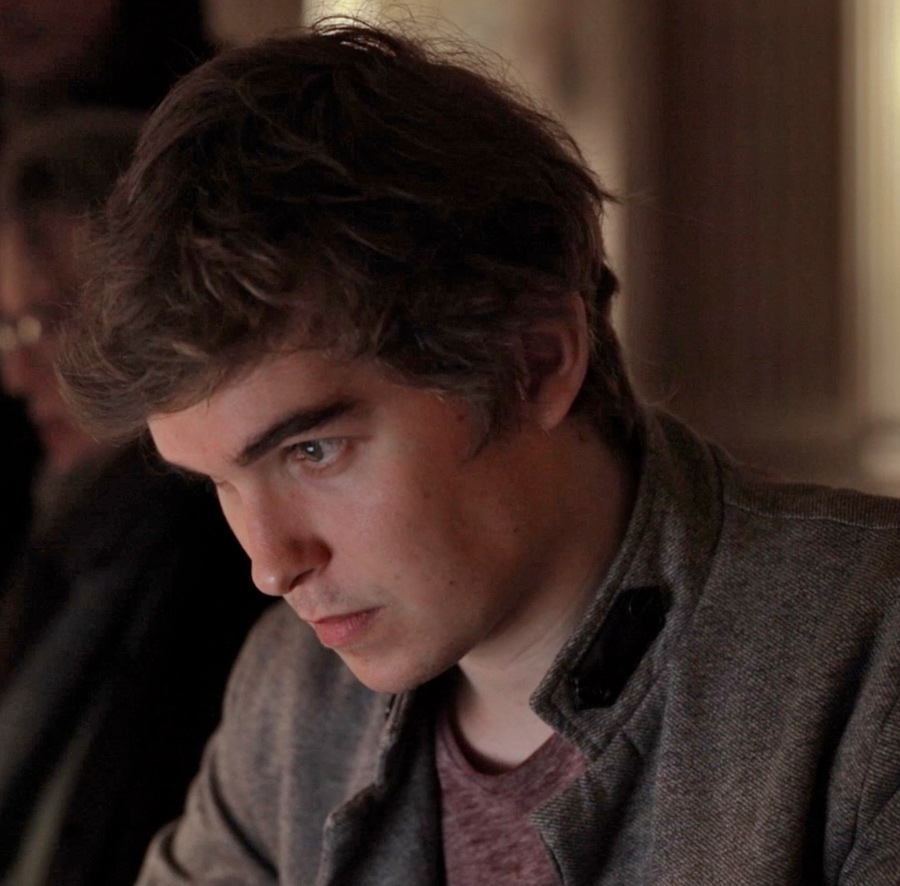 “A melody can appear near us and disappear in the long resonance of an adjacent transept that we do not yet distinguish; inviting us to discover it,” noted Zanni.
“Two approaches have been explored. The precise writing of trajectories: first, crossing the Pantheon from North to South, or from East to West, or from the ground to the dome.
Second, the development of generative algorithms controlling the movement of multiple sound sources, mainly inspired by physical models, for example, a simulation of flocks of birds, or stochastic models,” explained Zanni.

“We used two pieces of software for the development of these algorithms, IanniX and Max, the first one for the management of the trajectories and the second for the creation of the ‘playing’ interfaces, used by Thierry Coduys for the ‘live’ spatialization and mixing of the pieces,” revealed Zanni. Thierry Coduys from behind, facing the three-dimensional representation of the Pantheon by the open source 3D graphic sequencer IanniX.

Fifty-four Amadeus C12 model speakers are installed on the imposts of the building’s columns at 16-meters high off the ground. The speakers feature an H60 x V60° bespoke conical waveguide to optimize the high-frequency directivity in such a reverberant space. 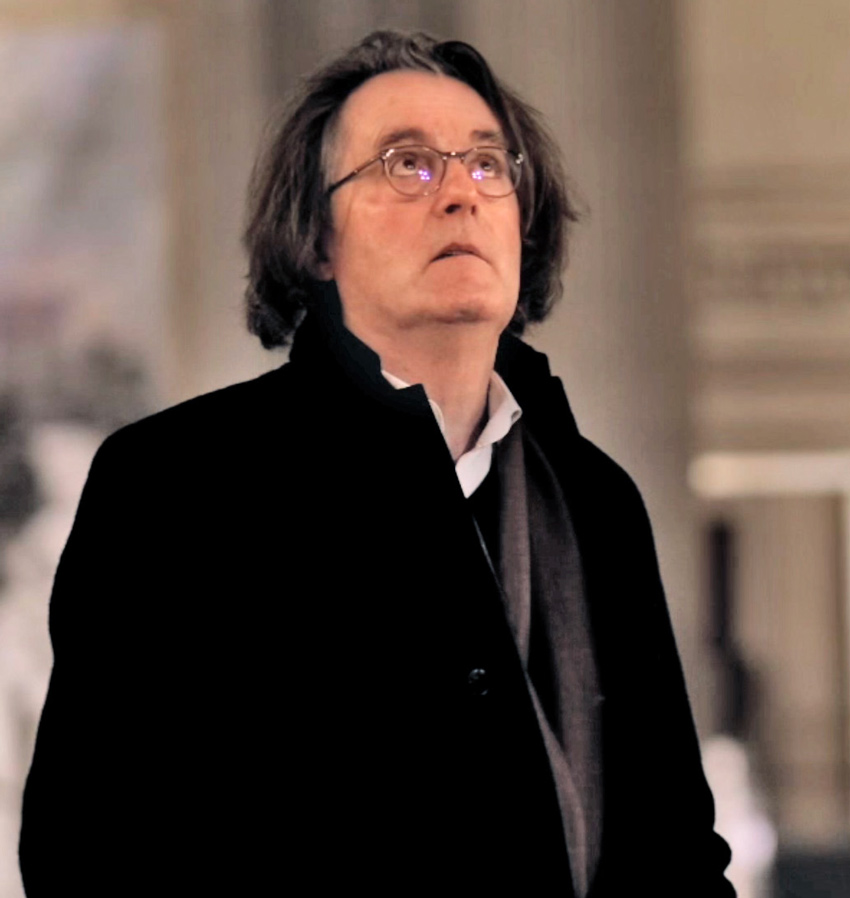 Pascal Dusapin listening to the rendering of his work and trapped with his eyes to the sky like everyone else by the work of spatialization.

Another eight Amadeus C15 model speakers have been installed at the dome-ground at a height of 35-meters above the ground.
These speakers also feature an H60 x V60° bespoke conical waveguide. They are used in an ‘indirect’ configuration, aimed toward the glass windows of the dome, to maximize the diffraction effect. This is an artistic choice.

“The composer Pascal Dusapin wanted something ‘angelic coming from the sky’, with precision in the mid-high frequencies, but not allowing people to precisely locate the sound sources,” explained Zanni. 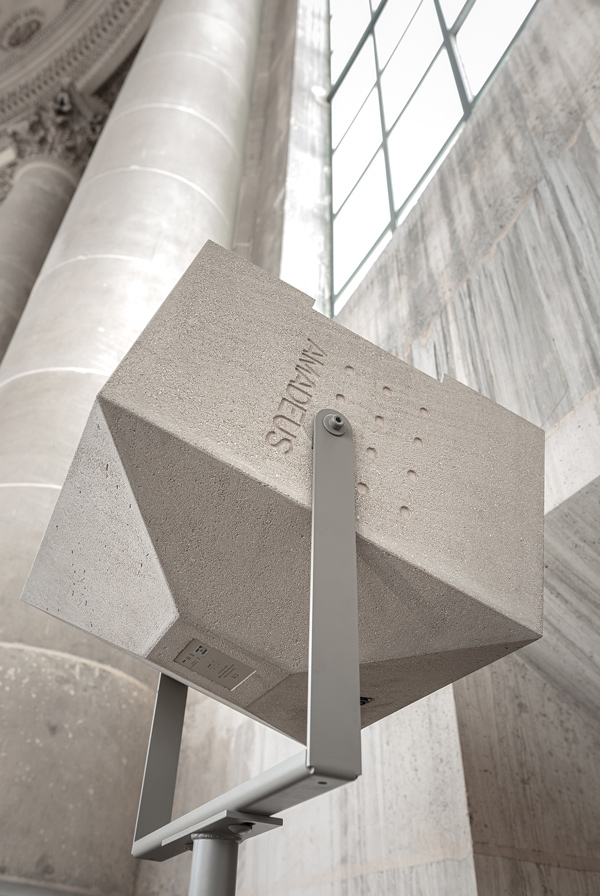 One of the eight C15s fixed on its bracket and oriented to avoid direct sound. Built as it should be in Finnish birch plywood, it is then coated with a micro-plaster, consisting of natural stone powder, lime, pigments, resin and various additives.

Both the fifty-four C12 and eight C15 speaker cabinet enclosures are stone-covered.
Amadeus worked closely with French specialists and architectural conservators on researching shades and materials and nuances to determine the correct finish.
The speaker cabinets are made of birch plywood but are covered by a micro-coating, made of natural stone powder. 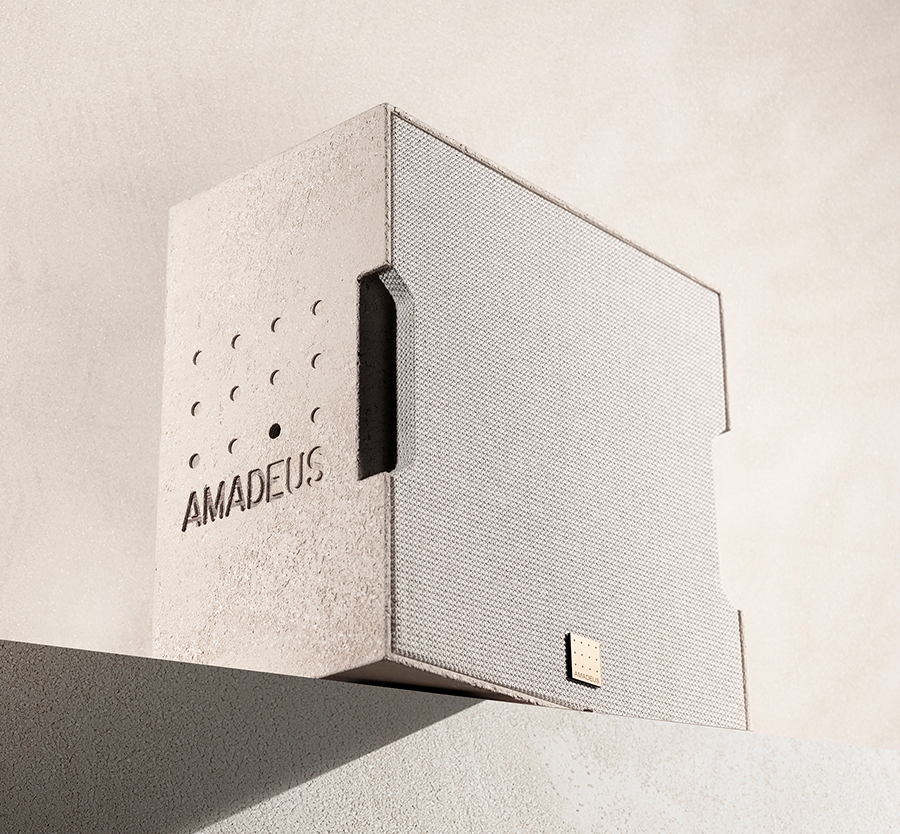 The result of the “stone” camouflage on a C6 completed by acoustically transparent cement gray fabric. 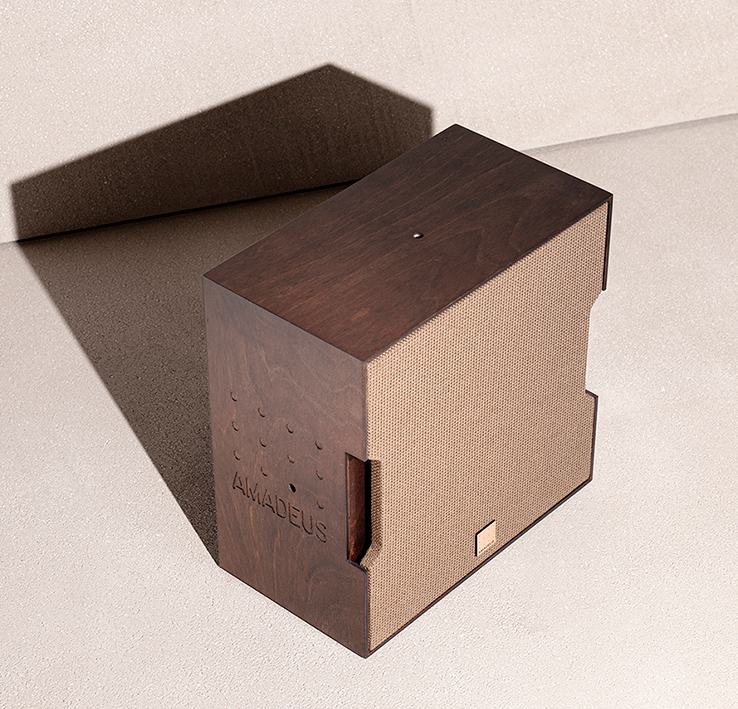 An additional eight Amadeus C6 model speakers, six featuring a dark oak wood stain, while two are stone-covered, are installed 4-meters above the ground, and are dedicated to playing the audio of the spoken names of 15,000 representative soldiers who died for France which were read and recorded by the French actors Florence Darel and Xavier Gallais.

We had the privilege of attending the ”Pantheonization” of Maurice Genevoix and were able to listen to the work of Pascal Dusapin inside the Panthéon. The result is intangible and present at the same time. Airy and defined with a very restrained high and especially low end. A moving sound mass that blends very well with Kiefer’s works and with the volume of the place. The cold and long acoustics of the Pantheon are skillfully exploited.

To get a binaural machine output sound preview and discover the location and the technical and creative teams at work, click on the Making-Off link below.

Equipment used in the Panthéon’s immersive audio install include:

To find out more about the Panthéon: www.paris-pantheon.fr/en/#

For more information about Amadeus and HOLOPHONIX: www.amadeusaudio.fr/en/