Grammy Award-winning Coldplay has completed the North American leg of their Music of the Spheres World Tour where Ayrton Domino and Perseo fixtures illuminated the stadium show from coast to coast. ACT Entertainment is the exclusive distributor of Ayrton lighting in North America.
Coldplay’s world tour supports their ninth studio album of the same name. The North American dates kicked off in April and wrapped in June; the tour will play Europe this summer and South America in the autumn. It has an innovative sustainability theme with each show powered exclusively by renewable, super-low emission energy. 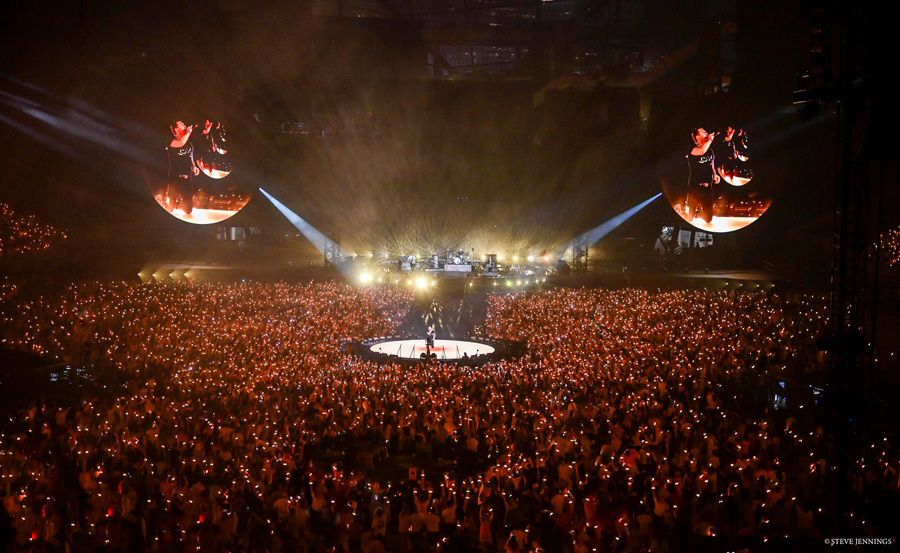 “Misty Buckley and Phil Harvey, the Co-creative Directors of the tour, developed a production design and creative direction inspired by Pythagoras’s Music of the Spheres theory,” says Lighting Designer Sooner Routhier of Sooner Rae Creative, who began working with Coldplay in 2019 on their Everyday Life album campaign.
“There’s a specific diagram that displays the arcs and movement of the solar system and its celestial bodies that we leaned on for inspiration. Thus, the architecture for the lighting design and the cuing of the system is heavily based on spheres, circles and arcs.”

Buckley explains that she and Harvey took as their starting point the Pythagorean theory that the sun, moon and planets create sounds and harmonies that are not audible to humans but can be heard by our souls. “We then explored music in space and went into a whole amazing creative wormhole of time, space, music and aliens, which led to the concept of alien music festivals in space, love, people and togetherness. It was a really mad and wonderful creative thread.” 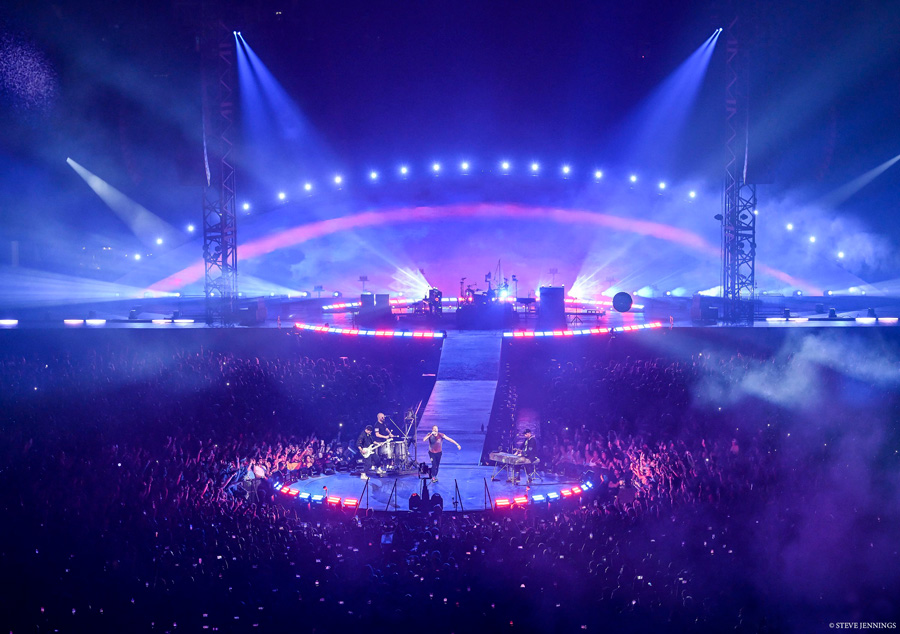 Sketches became CAD drawings with Buckley and Harvey keeping at it “until the geometry worked,” she says. “Then we added the alien hieroglyphics and all the different languages associated with the planet map on the album artwork. Each planet has its own language, concept and emotion. We created renders of this world and concept that led to building a scale model so we could visualize the production design in the context of the stadium. This is always the most exciting part as the band gets to see it in real space.” 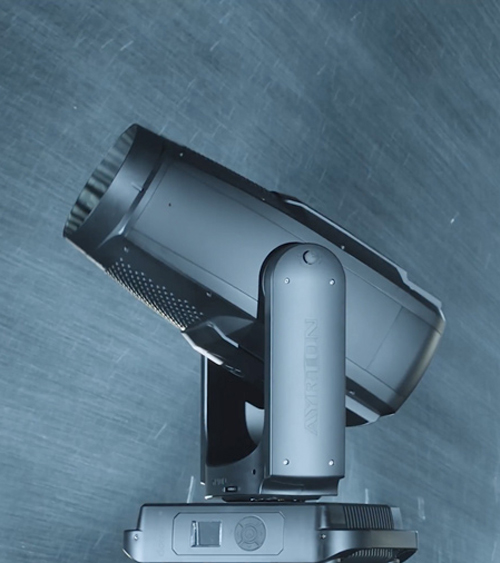 Domino, the most powerful motorized blade edge spotlight in the Ayrton IP65 range with 1000W of white LEDs.

Routhier chose 66 Ayrton Domino S and 74 Perseo Profile fixtures for her lighting design for the unique show. Upstaging Inc. of Sycamore, Illinois, the lighting and trucking vendor for the tour, provided the fixtures.
Routhier positioned 24 Perseo fixtures on top of the large, upstage moonrise screen, a videowall in the shape of a moon or sun cresting over the horizon. Forty-eight more were on audience PA delay towers at Front of House.

Twenty-four Domino fixtures were positioned on the floor upstage in front of the moonrise screen, ten served as side lights from the stage pylons and 32 were across the stage apron and side satellite stages. “We used them for large gobo looks, to paint the audience in light and as general effects lighting,” says Routhier. 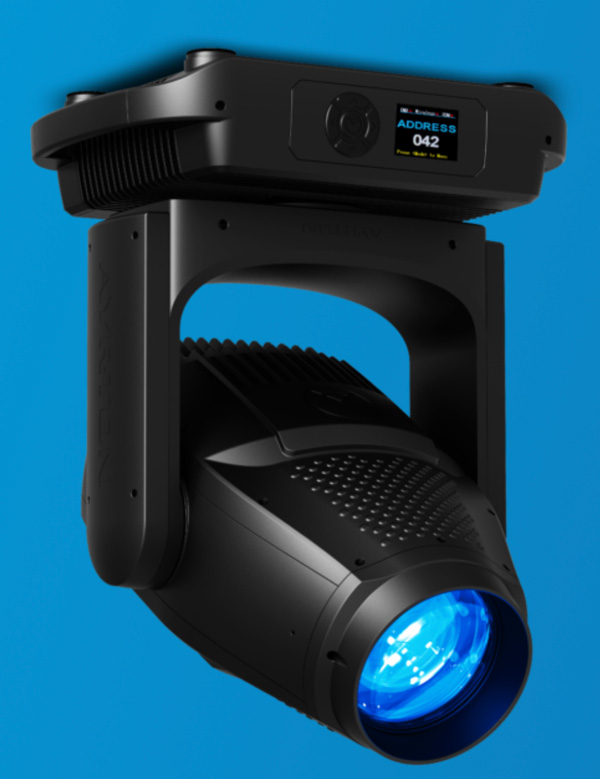 “We love the fixtures. They’re punchy, have an incredible assortment of beam and gobo features, and they’re rated IP65. Because of the band’s sustainability efforts, we worked hard to choose companies with healthy, eco-friendly practices and fixtures that could withstand the elements.
IP65-rated fixtures meant fewer manhours spent swapping out fixtures, less transporting of parts via post, and fewer parts used to fix lights that can’t withstand the weather. We’re also very impressed by Ayrton’s sustainability practices as a manufacturer.”

Shaheem Litchmore, who acted as the Lighting Operator and one of Lighting Programmers, declares that, “From start to finish these fixtures worked their magic. Different systems of Perseos and Dominos were creatively orchestrated to provide accents to the music and create an all-around vibe. One of my favourite moments in the show was the beginning of the song ‘Fix You.’ Chris [Martin] knelt in the middle of our B stage and, in a silhouette, was washed in an enchanting gold gobo backlight provided by the 24 upstage floor Dominos as well as 24 of our shelf Dominos. It was truly a perfect display of the power and elegance of the Domino fixtures.”

Lighting Programmer Joe Lott “really liked the look from the Perseos over the moonrise screen for the song ‘Viva La Vida.’ It’s where we had the Perseos in their widest zoom creating a really nice flared light source above the LED screen, which snapped colour and intensity following the beat of the music. It was very simple but really created the look of the song.”

He calls the upstage floor Dominos “a real workhorse in the design. It was great to have such a bright spot fixture on the floor to give us a strong backlight through the band even with plenty of gobo texture and deep saturated colours.”
Lott also felt that “having 48 Perseos spread out across the audience PA delay towers gave us a lot to work with. It allowed us to create some great looks where we threw gobo texture over the audience and lit up the whole stadium.” 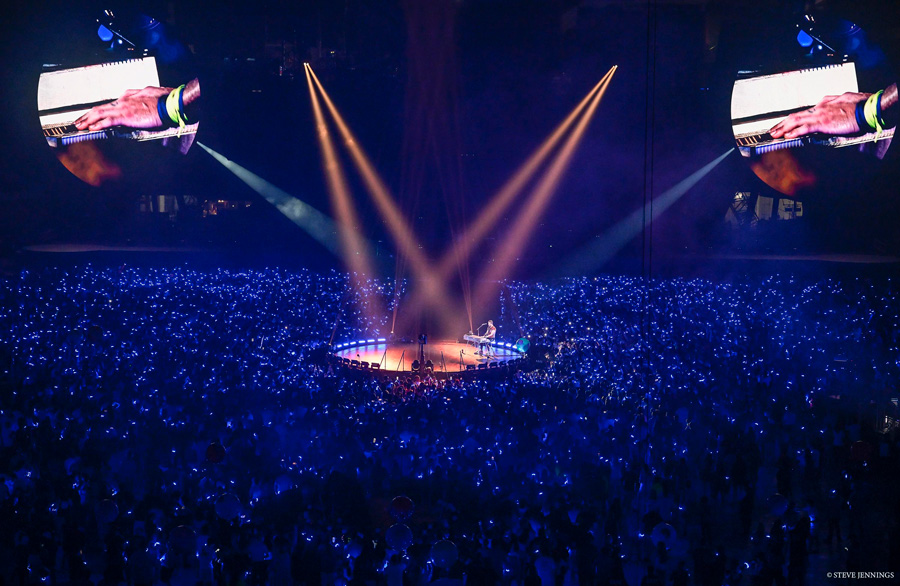 According to Litchmore the Ayrton fixtures “performed beautifully” and “creatively were a workhorse” for the tour. “Powerful backlight looks were provided by the upstage Dominos and Perseos while amazing audience lighting and effects were delivered by the Perseos in our audience towers.”
Their robust construction and IP rating were definite advantages, too, he adds. “We had our first bit of rain during our Philadelphia show, and the weather picked up during the load out. But we did not lose a single light. The fixtures stood tall against a nor’easter rainstorm and won. With these lights in our rig, I’m never worried. They’re rock solid!”

“It’s been tough this year. Nobody can debate that. Upstaging and ACT have a longstanding partnership, borne from the mutually held values of exceeding expectations and sublime customer service. That’s not debatable either. I’m convinced that this partnership, and these core tenets helped us put a challenging tour on the road during challenging times.
But make no mistake! Core tenets aside, this project was a labour of love. I’ll say it now, as I’ve said before ACT is an absolute pleasure to work with. When we’re working together, I know we’ll hit our deadline,” concludes Matt Gohring of Upstaging. David Kennedy was the Special Effects Designer for the tour and Matthew Kemp also served as a Lighting Programmer.

More information on Ayrton Perseo Profile and Domino S fixtures and the full portfolio of innovative Ayrton LED products can be found at www.ayrton.eu