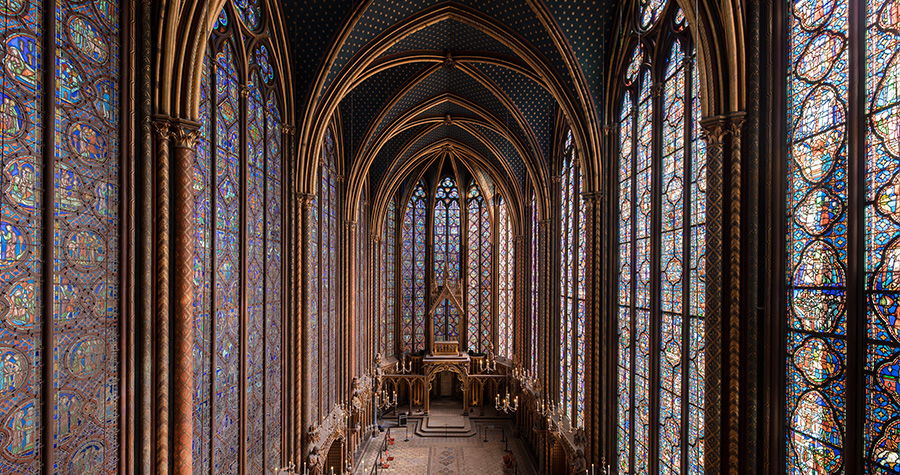 World-renowned director Robert Wilson, known for his avant-garde theatre works, has created an immersive sound installation entitled Gloria — a striking dreamlike experience— in the heart of Paris at the famed Sainte-Chapelle church. 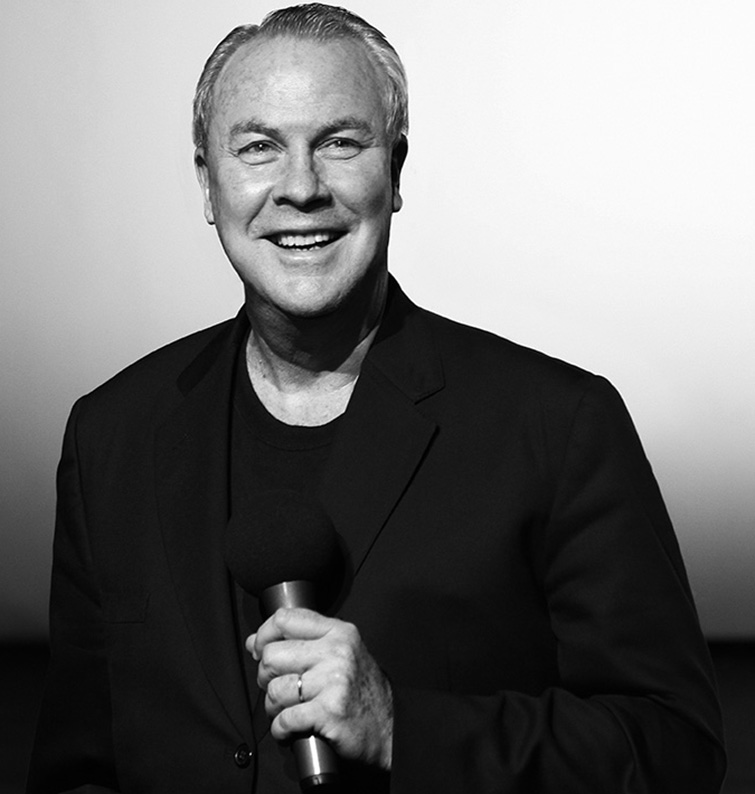 Coming from his native Waco, Texas, Robert Wilson was seventeen years old when, during his first trip to Europe, he discovered the Sainte-Chapelle, a jewel of Gothic art radiating on the whole Île de la Cité, in the heart of Paris.

It was a shock. He felt “the same strong emotion” when he returned to the royal building a few days ago to finalize the preparation of ‘Gloria’; a 360-degree sound installation presented every Saturday and Sunday from October 8 to December 31, 2022. 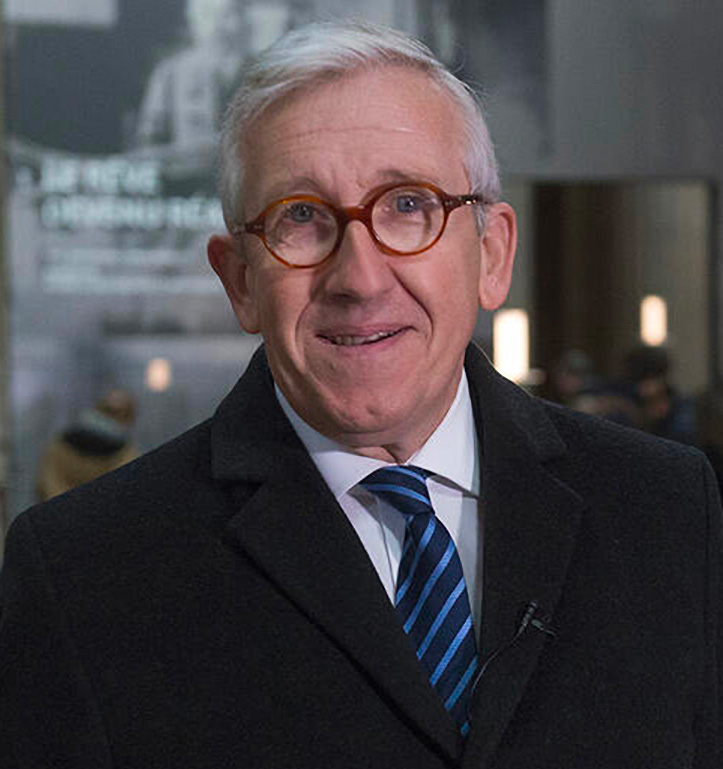 It is to celebrate half a century of success in France, since Le Regard du Sourd in Nancy (1971) and the first Autumn Festival in Paris (1972), that the president of the Centre des Monuments Nationaux, Philippe Bélaval, invited ‘Bob’ Wilson back, “a magician of light and sound” (according to the inviting force) who renewed, in his own polished and hieratic way, the art of dramatic and lyrical stagecraft.

“We have a determined policy of inviting contemporary artists because heritage and creation must work together,” said Philippe Bélaval, President of the Centre des Monuments Nationaux. “Bob was one of the artists I wanted to invite, to mark the 50 years of his presence in Paris. We felt that his perception of space, his mastery of sound and light could bring a lot to a monument.” Cécile Rives, administrator of the Sainte-Chapelle.

“It invites us to look at this monument, these windows, in a different way. It gives a new intensity to this visit experience which is already very strong,” agreed Cécile Rives, administrator of the Sainte-Chapelle.
“Some visitors will come to hear Bob Wilson. Then others will come to visit the monument and have the chance to discover it on this occasion, that’s what’s extraordinary.”

“Discovering how beautiful this piece is has been an overwhelming experience. The impression remained in me for many years,” said Robert Wilson.
When the Centre des Monuments Nationaux (CMN) gave Bob Wilson a ‘carte blanche’, no surprise if, instinctively, his choice fell on this location. The Sainte-Chapelle, built during the 13th century at Saint-Louis’ request, is a place involving a number of challenges.

In Gloria, an experience running six times a day and lasting twenty-five minutes, Wilson creates a dialogue between music and words and the light passing through the windows of the upper chapel, an exceptional witness to the art of stained glass in the thirteenth century. 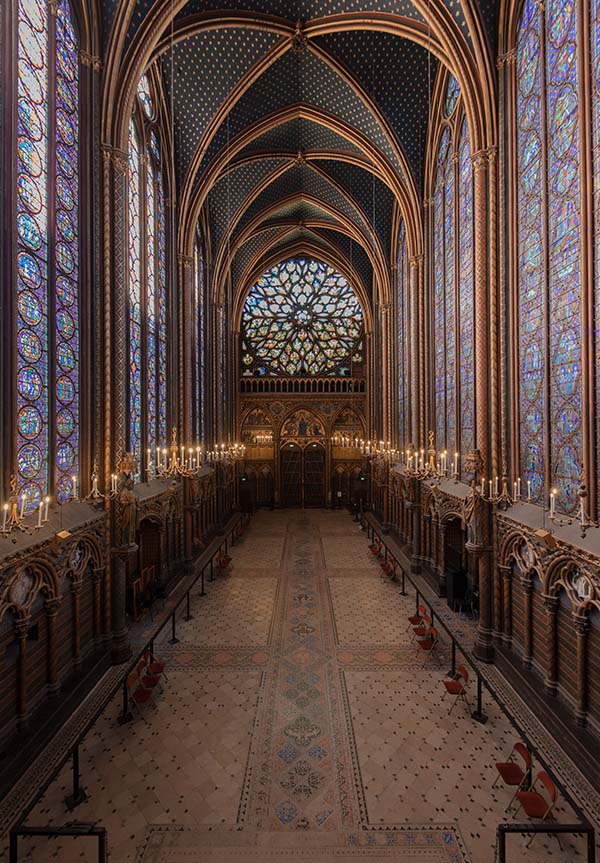 “It’s very different from staging for the Paris Opera, as an example. It took some time to figure out how to work in such a place, because of the reverberation time and the way you perceive sounds,” said the director.
“Here, I didn’t have to do anything! The light is already so extraordinary, especially the way it changes throughout the day,” added Wilson.

Composer Richard ‘Dickie’ Landry (b.1938) has been a companion of Bob Wilson since the effervescent years of New York with Robert Rauschenberg, Philip Glass, and Trisha Brown. He has composed for the occasion a post-minimalist style of music with stretched lines that are familiar to the ear, made of layers of synthetic strings imitating organ chords.
“The music comes from a mass I wrote in 1985, from which I took the ‘Gloria’. I improvised on the keyboard, following the original structure of the hymn,” Dicky revealed.

The soundtrack is enriched with excerpts from the great poem De rerum natura (About the Nature of Things) by Lucretius, a Latin philosopher of the first century BC. A secular echo to the great themes evoked by the stained glass windows, ‘declining the relationship of man to nature, of the soul to the body, of the earth to the heavens.’

“It’s a text for all times, so modern, solid as a rock, indestructible,” said Wilson. Words in French recorded by a child and two actors dear to his heart since his Fables de la Fontaine at the Comédie-Française (2004), Cécile Brune and Eric Génovèse. “I chose them simply because I liked to hear their voices,” said Wilson.

The result is an invitation to contemplate the place, and even to meditate. “A time to think and to dream in the heart of the city but away from the rumor of the city”, summarizes the octogenarian artist, a non-believer but a true spiritualist, after having listened one last time to his creation, his face concentrated, his hands resting on the cane that supports him. “These moments are so rare in our busy lives. Let’s bet that for many visitors, the emotion naturally felt in this ‘chapel of light’ will come out increased.” 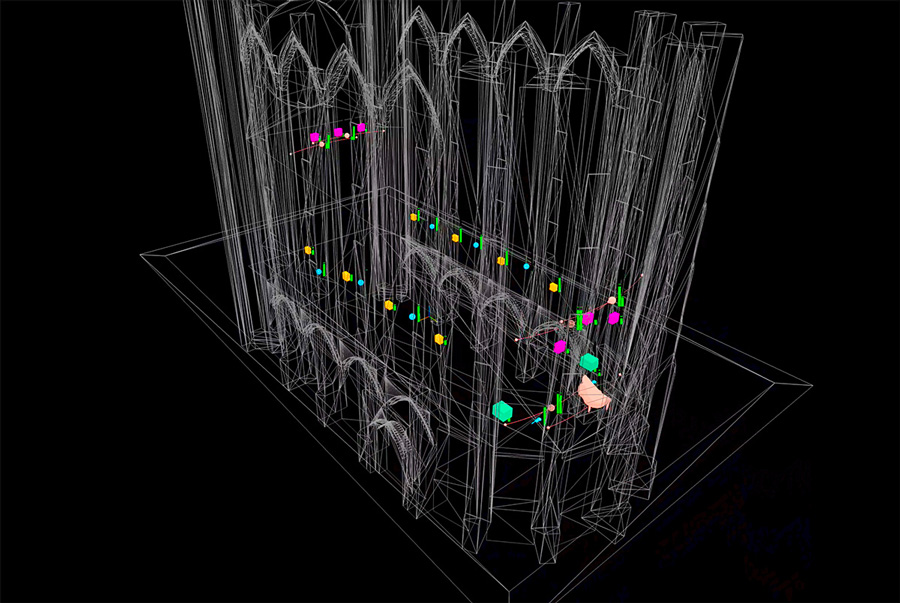 Transparency modeling of the chapel with the location of the sound spots and the levels as they appear in the Native version of HOLOPHONIX.

Amadeus developed and installed a unique, custom-made sound projection system in Saint-Chapelle, in coordination with the heritage conservation teams of the Centre des Monuments Nationaux and their new technology consultant, Thierry Coduys.

“Achieving this short-lived work led us to transpose to rental what has been our strength for a very long time, tailor-made design, and to support creators in their artistic approach on a technical level,” says Gaetan Byk, CEO at Amadeus.
“On the request of the curator as well as Bob Wilson, the eight most ‘visible’ speaker enclosures were covered by us in gold leaf. They totally disappear in front of the mouldings, pillars, buttresses and arches adorned with red, blue and gold, becoming a component of the architectural polychromy of the monument,” added Byk. 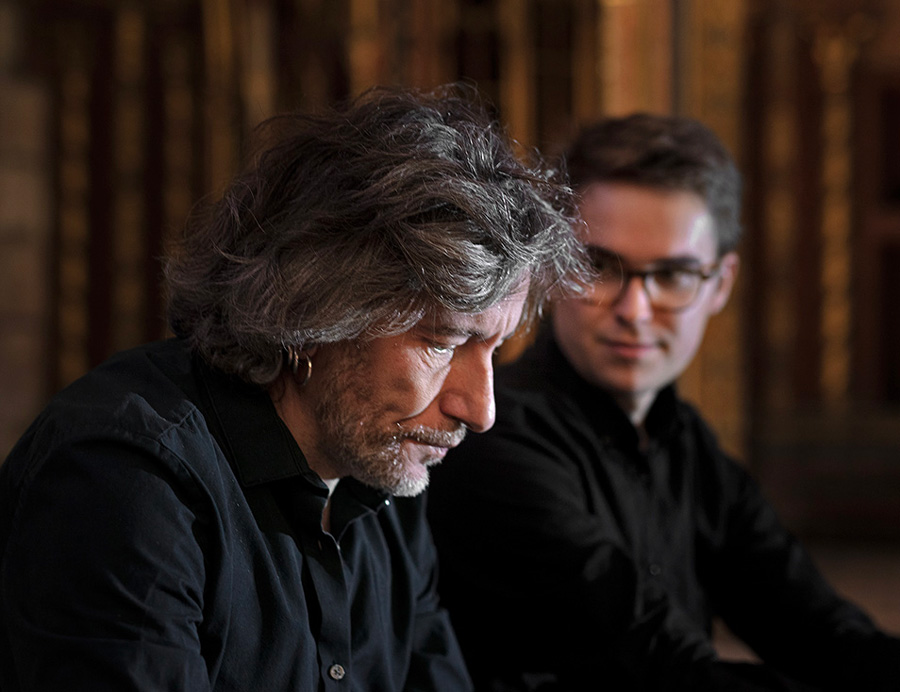 Pipo Gomes, Technical Director at Amadeus, in charge of the project and behind him Adrien Zanni, researcher and developer at Amadeus for HOLOPHONIX.

“This project introduces this new ‘department’ dedicated to ephemeral projects and directed by Pipo Gomes, Technical Director graduate of the Paris-based CFPTS, previously Sound Manager of La Scala Paris, and sound designer of renowned choreographers and directors including André Engel, José Montalvo, among others,” said Byk.

The electroacoustic system designed by Amadeus is made of fifteen loudspeakers surrounding and overhanging the audience, some of which are custom-made and finished with gold leaf for perfect harmony with the dominant materiality of the building.

“We worked in close relationship with the curator of the Saint-Chapelle and the teams of the National Monuments Centre (Centre des Monuments Nationaux) in order to find implementation solutions guaranteeing the integrity of the monument as well as the utmost discretion of the electro-acoustic system,” says Pipo Gomes, Technical Director at Amadeus, in charge of the project.

“Some speaker systems are particularly suspended from the historic framework of the Sainte-Chapelle by ultra-fine stainless-steel wires of nearly 20 meters long, crossing the vault through 8-centimeter diameter holes. The loudspeakers were then stabilized by transparent nylon wires, totally invisible,” adds Gomes. One of the Amadeus C-Series speaker hanged by stainless-steel wires and stabilized by transparent nylon wires.

These speakers are controlled by the brand-new sound spatialization software, called HOLOPHONIX Native, developed by Amadeus in coordination with IRCAM.

“The sound overwhelms you! It comes from the right, the left, the center, the ceiling,” commented Wilson. The software uses several techniques of reverberation and spatialization allowing sound to position, to move, and reverberate sources in space, in two or three dimensions.
An algorithm of spatialization supporting the synthesis of the sound field in 3D or Wave Field Synthesis (WFS) – associated with several parametric reverberators – was selected in order to place and move the sound sources in space in an intuitive way.

“Nick Sagar who has been in charge of the sound creation usually works with Logic Pro software for his creations. We have therefore integrated HOLOPHONIX Native into his production workflow so that he can maintain his work habits while having access to the spatial writing capabilities offered by our software solution, both in object-oriented mixing or in direct points,” adds Adrien Zanni, researcher and developer at Amadeus for the HOLOPHONIX project. 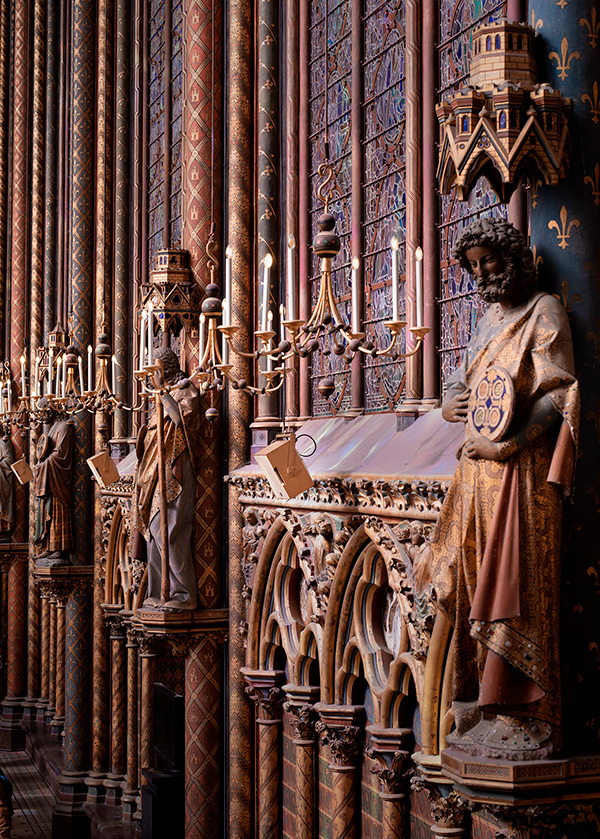 The speakers seamlessly aligned and yet barely visible inside the chapel.

“The integration of the brand new HOLOSCORE plugin allowed him to edit trajectories as automation directly from Logic Pro. We also used the reverberation engine available in HOLOPHONIX Native mainly to homogenize the diffusion of the system and the acoustic response of the Sainte-Chapelle.
This reverberation tool has also been used on the synthesizer composition to give it a more majestic look, in order to create a virtual organ, as this monument which has none,” adds Zanni.

“The two subwoofers placed at the altar’s level contributed to this sensation of acoustics down to the low frequencies.
To finalize the acoustic rendering, we pointed/aimed a few loudspeakers in a diffuse field (indirect diffusion), which brought complexity and cohesion to the overall perceptual rendering.

Once the final mix was validated, we used the REAPER software as a multitrack recorder for the sound creation, then finally the Qlab software for the automated playback of the files at the scheduled broadcast times,” concludes Zanni

The carte blanche given to the American director and visual artist Robert Wilson unfolds masterfully under the vaults of the Sainte-Chapelle. A dive into a bath of light and sound, to be discovered before the end of the year.

For more information about Amadeus and HOLOPHONIX, visit amadeuslab.com or holophonix.xyz