The grand opening of the mosque took place on August 21, 2020. The celebration coincides with the 69th anniversary of the birth of the first President of the Chechen Republic, hero of Russia, Akhmat-Khadzhi Kadyrov. 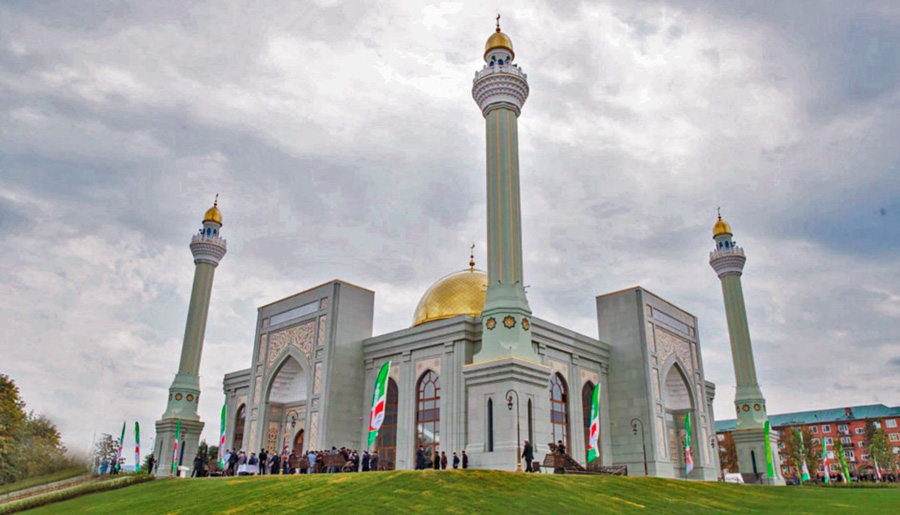 The air volume of the hall, taking into account the under- and upper- balconies, is about 14,000 m3, with a total surface area is 6,360 m2. Acoustic calculations were measured by the computer modeling software AFMG EASE. The sound system covers the entire premises of the prayer halls (the main prayer hall and two halls on the basement level), providing optimal intelligibility as required. 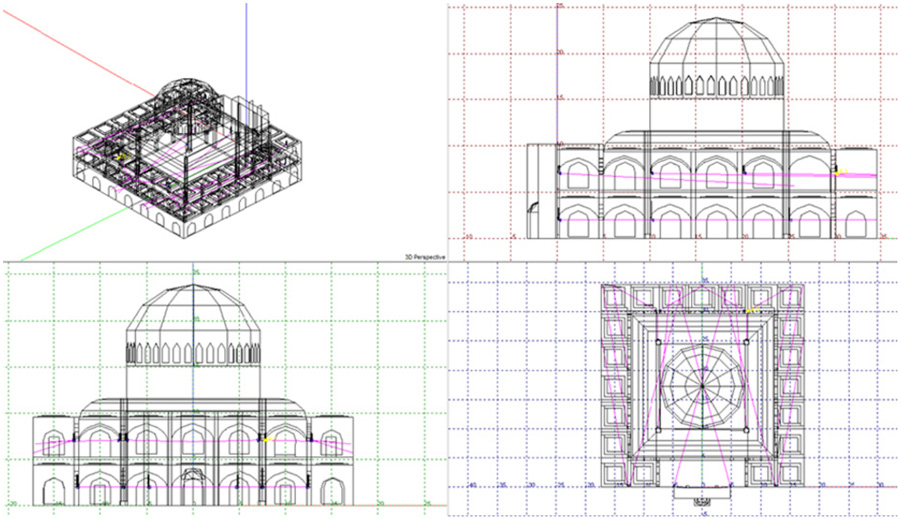 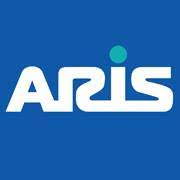 Since there are no intelligibility standards required in Russia, ARIS engineers used external scientific publications about acoustic standards in mosques, including those carried out by ARIS, and with the support of the Acoustics of Halls, inside the Research Institute of Building Physics laboratory (RAASN).

According to these studies, taking into account the volume of the main prayer hall, the optimum reverberation time for RT60 in the frequency range of 500-1000 Hz should be from 1.9 to 2.2 seconds. 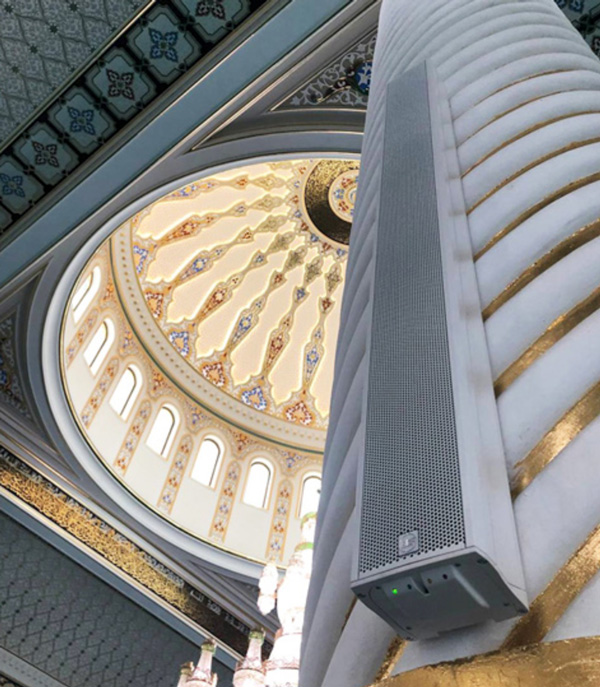 “Since there were no possible adjustments to the original finish, the challenge to reach the optimal RT60 was difficult,” comments Alexandr Shamray, Head of Sales at ARIS. “To achieve good intelligibility, the Speech Transmission Index (STI) must be around 0.60, for excellent transmission, or more.

Taking into account the extremely high resonance of prayer halls and the lack of a meaningful reduction using acoustic absorbers, we focused on intelligibility parameters. Relying solely on controlled directivity and quality of the sound system we worked on reaching 0.50-0.55 (or higher)”.

“The peculiarity of the VSA columns is the possibility to increase the beam of direct sound into the area and reduces the amount of unwanted reflections [..] extremely important for improving speech intelligibility in rooms with high reverberation.” 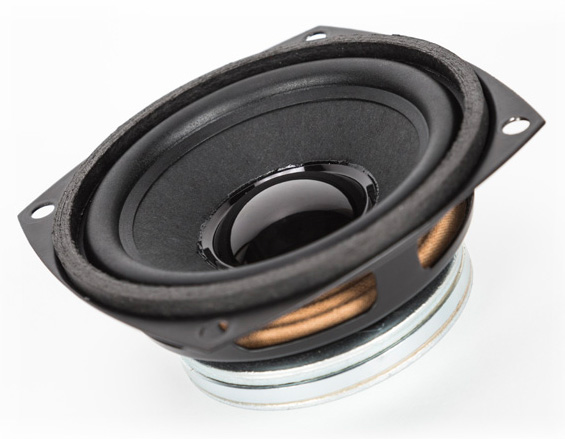 Shamray continues, “Focusing on the frequency bands of 250, 500, and 1000 Hz, we simulate the results using RCF digitally steerable columns VSA 1250 II and RCF VSA 2050 II, placing the loudspeakers, where possible, with maximum throw of 10m.

In addition, these columns have a fairly narrow vertical radiation pattern, which increases the beam of direct sound into the area and reduces the amount of unwanted reflections. This approach is extremely important for increasing speech intelligibility in rooms with high reverberation.” 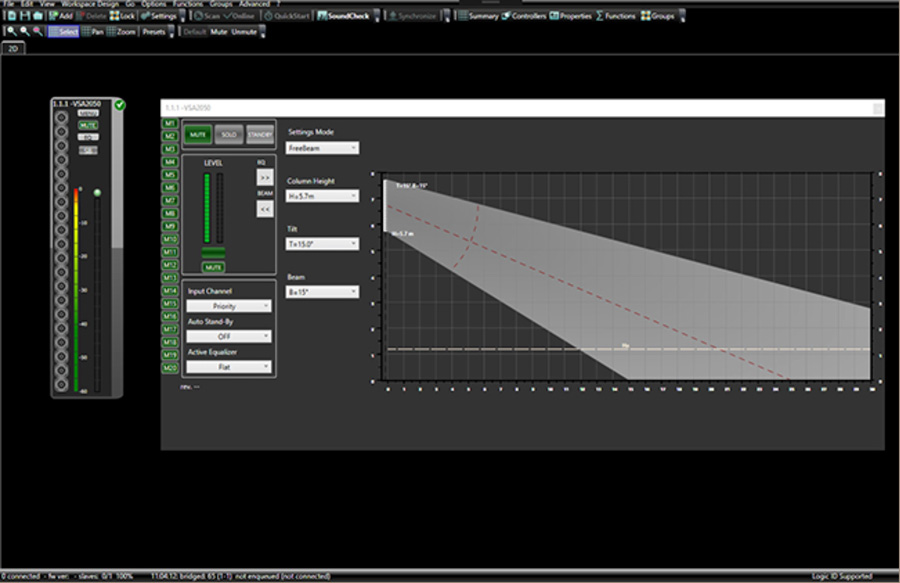 An additional pair of RCF VSA 1250 II composes the delay line, suspended on a pair of supporting columns of the dome, farthest from the mihrab, at a height of 2m. Ten RCF L 2406T sound columns are used as sound systems for the balcony, placed on the front wall and on the column of the balcony. 44 PL 8X ceiling loudspeakers are installed on both the prayer halls on the basement level.

“All measurements coincided within 96% of the calculations, resulting in a non-tiring and intelligible sound system with good performance and perfect coverage.”

The tradition of inviting people to pray at the mosque has existed among Muslims for 14 centuries. It was necessary to amplify the voice of the muezzin so that it can exceed the noise of a modern city.
Each minaret is equipped with four powerful weatherproof RCF HD 410T and HD 6045EN horn-type speakers. They are directed to all cardinal directions and used for the daily calls to prayer. The HD range speakers are designed for long-throw vocal applications without loss of intelligibility and with low distortion.