An Optocore/BroaMan fiber network is at the heart of the new MEETT Toulouse Exhibition & Conference Centre. The third largest facility in France (outside Paris) it boasts a 40,000m² modular Exhibition hall, a 15,000m² Conference center, a main street that opens into an outdoor area of 25,000m², capable of hosting a wide variety of events, and has been constructed on a 155,000m² site, close to Toulouse Blagnac airport and the Airbus training centre and workshops. The installation of the network was carried out by Optocore’s long-term partner, Gilles Bouvard’s company GB4D, in close collaboration with the scenography company Ducks Scèno, headquartered in Villeurbanne-Lyon, under the direction of Aldo De Souza.
This scenographer also has an agency in Paris and Shanghai. The Bouvard team worked alongside Grégory Aldéa, head of audiovisual projects at Ducks Scéno, on behalf of the MEETT consortium, Toulouse Métropole and GL Events. GB4D were able to meet the Consortium’s specification for a complex network that required the capacity to transmit sound, video, lighting and even IT.

Gilles Bouvard set out the engineering challenges faced, and how BroaMan components provided the solution.
“We conducted an in-depth study of possible future equipment, both upstream and downstream of our network.
During the development phase, neither the scenographer nor I were aware of the audio-visual equipment that would be installed in the complex, so we made a possible hypothesis based purely on the plans.” To simplify, in yellow it is the Convention Center on 2 floors, in blue the huge parking lot, in green, the Outdoor Exhibition Area and in red, the Exhibition Center.

MEETT itself is divided in three parallel bands, based around a row of modular exhibition halls to the north of the complex. In its complete form the space is massive 500m long and 80 to 100m wide. The separate convention centre and multi-function event hall are at the south wing with a reception area to the centre of the concourse, and multi-storey car park for 3,000 cars. With such distances and wide-spread area the choice of a fiber network to transport all video, audio and data signals was obvious.

The Convention Centre’s 12 Seminar rooms are all equipped with fiber optics, along with a large Hall, in which another convention room can accommodate around 3,500 people (seated), while a second Hall can host exhibitions or other needs. At its maximum, the Convention Hall can hold around 7,000-8,000 people showing the advantage of modularity. The 12 Seminar rooms above the two Halls.

Fiber optic points are stationed throughout the Convention Centre, and each modular modular room is equipped with three quad fiber connection points.
For the management of these 12 rooms, a Seminar Rooms node has been equipped with a BroaMan Route66 Video Router (40 in / 40 out), where 26/26 connect via CWDM multiplexer to fiber stageboxes in specific rooms, while 14 /14 allow fiber video connections between routers in Seminar Rooms Node and Convention Halls node.

Gilles Bouvard explains the rationale. “The CWDM video makes it possible to have two Videos In and two Video Out per modular room (the 26in and 26out video config corresponds to the 13 rooms in the original plan). The 14 optical strand-to-strand video streams allows full duplex in / out with the Convention room node.”
The fiber points are cabled on single-mode quad fibers, dispatched to the router by a WDM frame. The latter is supplied from a manual fiber patch which allows connection of 13 COM ports (combined main connections which carry all signals on a duplex fiber) to the router on the 39 available connection points (three per room).

In the Convention Halls node, network distribution is via 24 quad fiber connection points.
In the Seminar rooms node a BroaMan Route66 Video Router (38 in / 38 out) provides 24in / 24out CWDM video for fiber stageboxes and the 14 full duplex in / out SDI fiber video share streams, with a WDM frame facilitating various connection points. The rear is almost more inspiring !

“Each node is additionally equipped with a Optocore AutoRouter15 for the Seminar rooms and an Optocore AutoRouter10 for the Convention Hall to complete the Optocore loop,” confirms Bouvard.
In order to function in all the different spaces, 10 Mobile racks have each been plugged with a BroaMan Mux22-IVT/MADI 4 SDI in / 4 SDI out, with 4 MADI fiber ports for audio; an Optocore X6R-TP-8MI/8LO (two ports of 16AES, four DMX RS422 port, LAN Base 10/100).
Each rack can be connected by a Quad fiber to any connection point in the building, both for seminar rooms and the Convention Center. 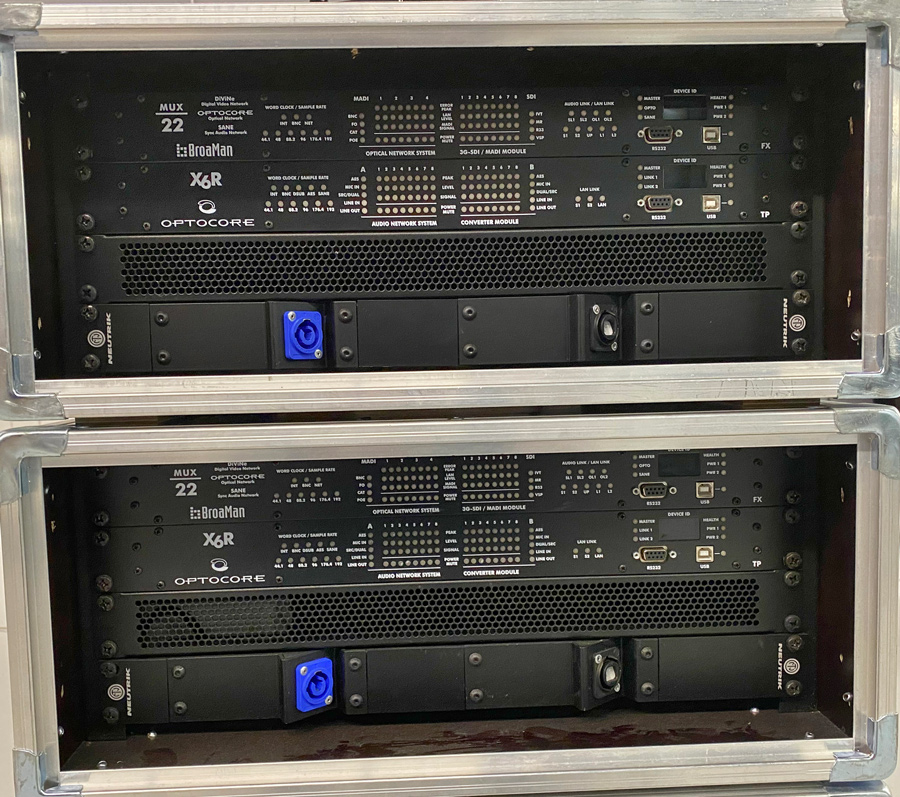 It had been necessary to have a full Optocore backbone for audio and BroaMan for video and fiber routing to avoid latency issues, according to Bouvard. « This fantastic system allows you to have any audio control surface in the network. In addition, given the complexity of the place, I challenge anyone to set up an Ethernet-based or IP network, and have it be as easy and fast as ours to operate, without having to be a computer scientist!”

The sound reinforcement is an L-Acoustics KARA system with the new P1 processor, while the installed mixing consoles are Soundcraft Vi1000s with MADI cards. The choice relates to the fact that they can have 96 inputs in the network with a remote gain. There are 80 Optocore preamps on site. “All sound consoles can be connected to the network without any problem, most of them, including Soundcraft, could control Optocore preamps directly from the desk.” The L-Acoustics system, per side 8 Kara and 3 SB18 and to fill the center, a litte hang comprising of 6 Kiva.

In conclusion, Gilles Bouvard says, “The challenge today is to provide solutions to satisfy all user demands, and the transport of different IP and Ethernet-based protocols.
“Five years ago it was complicated, but thanks to BroaMan today we have the tools. Together we develop devices to transport and route data streams carrying different protocols such as AVB, Dante, AES67 or video NDI, IP very simply and with no bandwidth limit.” With sound and lighting already in place, due to COVID 19 the video equipment phase will now form part of a second capital budget in early 2021.