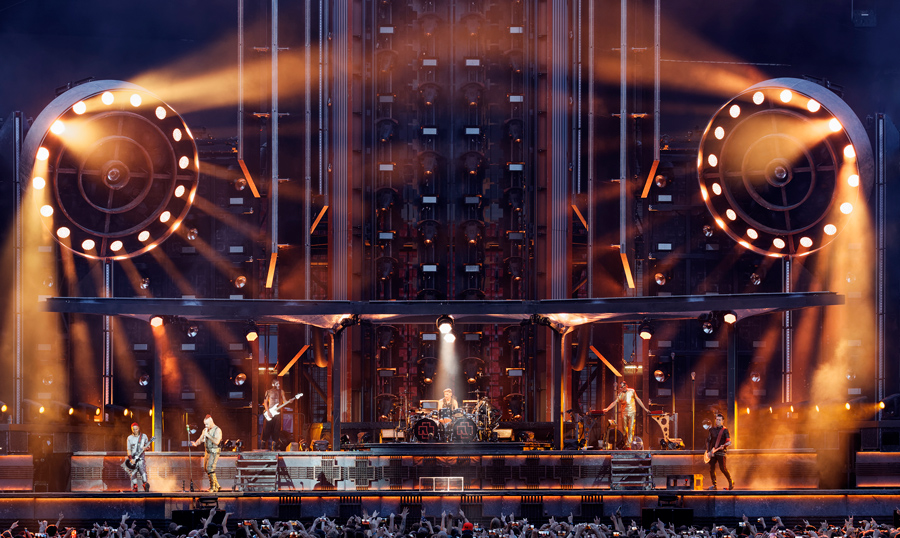 Pyro and metal rock star German rock band Rammstein just completed its first ever stadium tour in Europe with Claypaky HY B-EYE K25, Scenius Unico, Mythos 2 and Sharpy lighting fixtures, all elected by Lighting Designers Ronald Greil and Patrick Woodroffe of Woodroffe Bassett Design, touring across the continent with the show.
Neg Earth Lights, London was the lighting vendor for all this inventory. 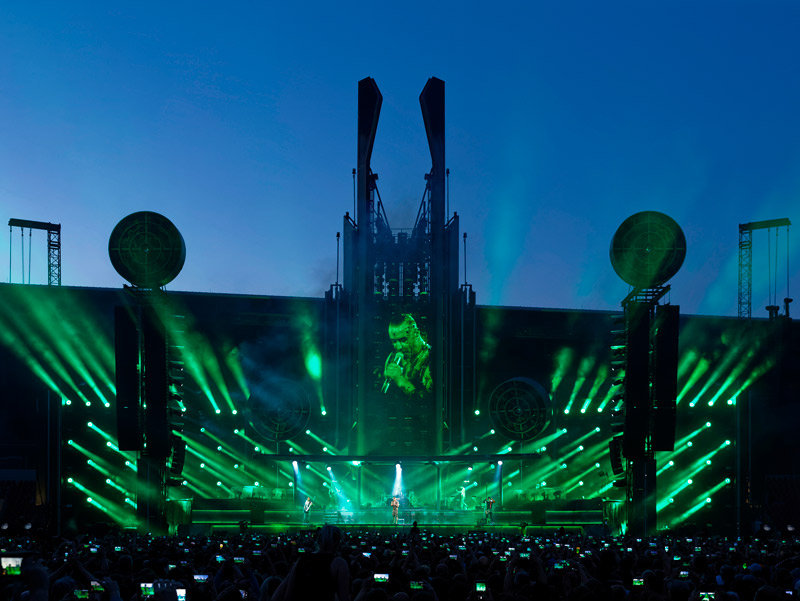 LD Ronald Greil says “Our brief was to keep the lighting in line with the Rammstein aesthetics built over 25 years of touring.” He’s having his first time working with the band. “It was no other standard pop or rock show; it was more like a rock opera, all perfectly staged. Featuring unique staging and architecture, a rig with over 1.000 lights and pyro, we kept the focus on the band creating the canvas for them to perform on.” 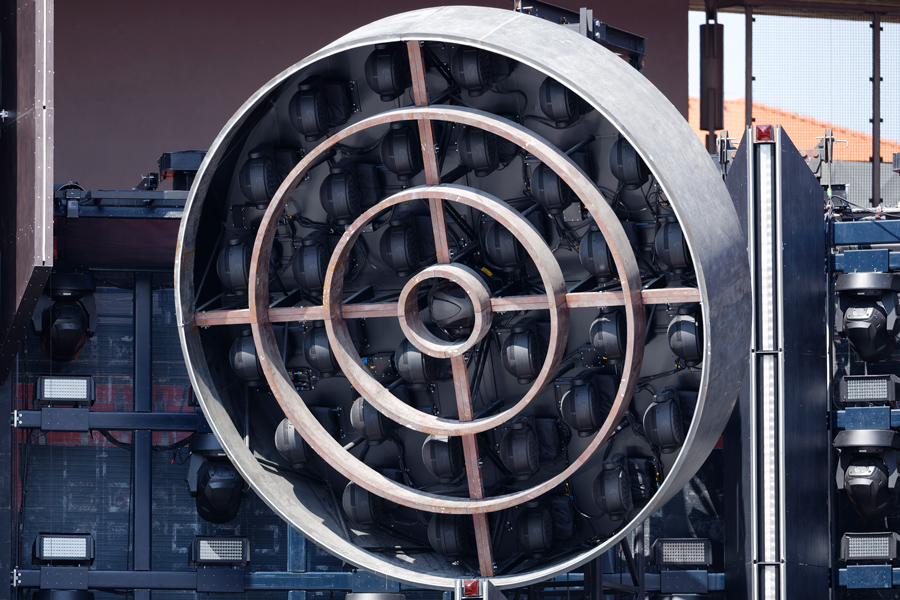 Comprising “Metropolis” and steampunk-inspired elements, the industrial-style set had a 9 x 5-meter video screen upstage attached to a 38-meter high tower, in order for it to track up and down.

Video content displayed the band’s logo in different variations and IMAG, which was treated and distorted. The tower also held parts of the moving light rig and housed pyro at its summit.
Additionally, two big scenic pieces were located upstage and two downstage and featured circular light fittings. In each one were fitted thirty-two K25s. 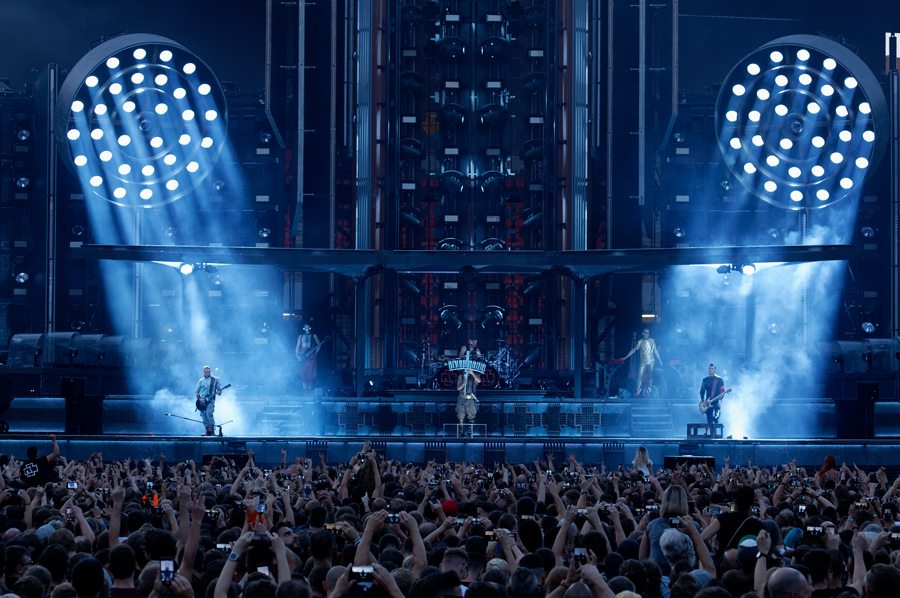 « As we were one of the first to use that many K25s, we were happily surprised by their light output and how they could be reliable on tour”, asserts Greil. The group loves their sheer light power, and the K25s were right on track with this demand.
Eighteen Scenius Unico were installed alongside the towers for main and lateral lighting for the band. « We also used with a Follow-Me automated follow-spot system », adds Greil.

The Mythos 2 fixtures were rigged on the front part of the towers, with 20 on each vertical line, so they wouldn’t be too visible. From this position, they created shadows and interesting forms of the set. Their ring-like beams also performed rays of sunshine look-alike at the rear of the tower. 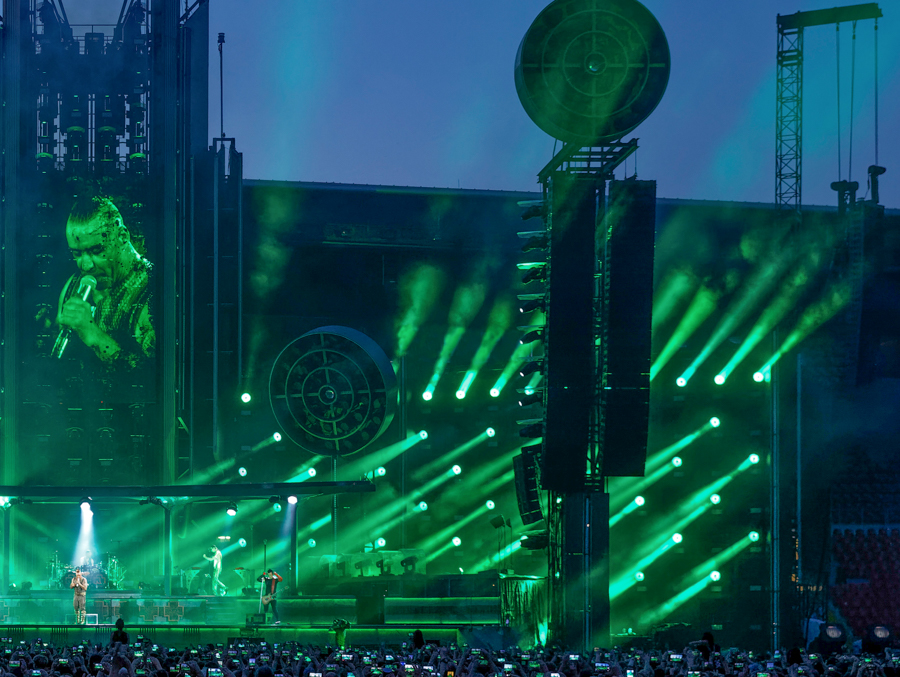 «The Mythos 2 are reliable projectors», reports Greil. “They’re a versatile beam and spot units, that are not too heavy for a structure like the tower.” Eight Sharpys were also deployed for their signature beam lighting at the B-stage over lighting mix position.

“It was a pleasure to work on the tour and enjoy the trust that the band, creative team and management put in us,” Greil concludes.

More information on the Claypaky Werbsite.