An exhibition like Prolight+Sound in Frankfurt keeps showing us major technological innovations in the field of intelligent lighting fixtures and controllers.
In the past few years the new moving heads have relegated the not so old Mac2000 models to light years. Literally, the functions of the projectors have increased tenfold and the astronomical quantities of parameters to be treated have cornered the manufacturers of lighting desks further into the ground.

The Luminex French-Belgian team chases the in-depth demos of their new Nodes.

The amount of information to be processed has been multiplied by 20 in 15 years, not counting all requests for mixing video, lights, backup system and remote console. If the management of these data flows between peripherals got organized after all, thanks to the genius of some major players such as Wayne Howell, inventor of the Art-Net, or by the sheer importance of some manufacturers whose own protocols finally prevailed (MA-Net, Kling-Net, sACN), the day-to-day reality is still terribly … obsolete. 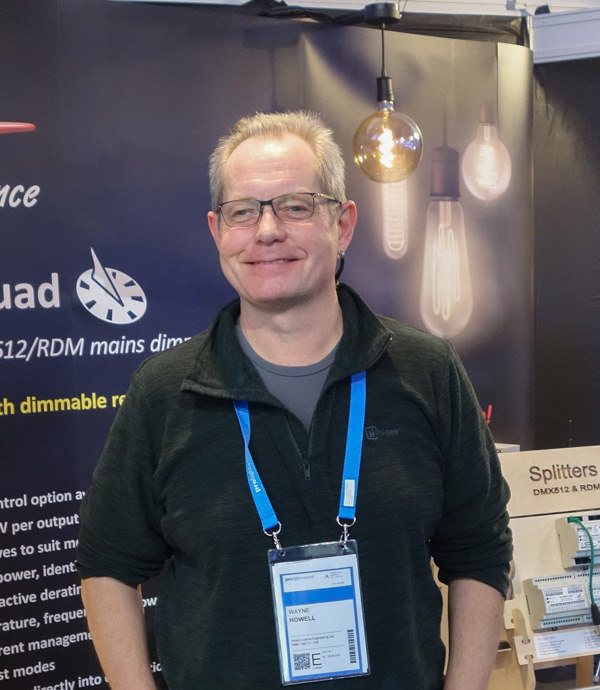 The great inventor Wayne Howell. His legendary discretion does not prevent him from also being the author of three essential books: Rock Solid Ethernet, Control Freak and Light Bytes. He’s also a very active member of the organisation team and inspirator for PlugFest.

Put the blame on the DMX512 protocol, so robust and easy to use that it still represents the vast majority of projector connexions, almost thirty years after its release in 1990: actually the standard name in full is DMX512/1990. To understand the technological outdating of this system, it is enough to remember that the DMX was standardized and distributed at the same time as the old Videotex first machines, such as the French Minitel. Fortunately, the consoles have evolved.

For a manufacturer like Luminex, involved in finding solutions to improve and replace old standards, it is clear that the DMX is bound to disappear in the medium term. At the time of renewing their range of MK2 Nodes, the number of DMX outputs no longer appeared as an end in itself.

The difference now lies in the processing blocks, because it is obvious that the future of connections will be made more or less dematerialized via the Ethernet network.
LumiNodes are interfaces thought ten years in advance. Naturally, they’re able to work with current set-ups, but they are mainly designed to anticipate future protocols and adapt to the increasingly densified networks in type of venues. 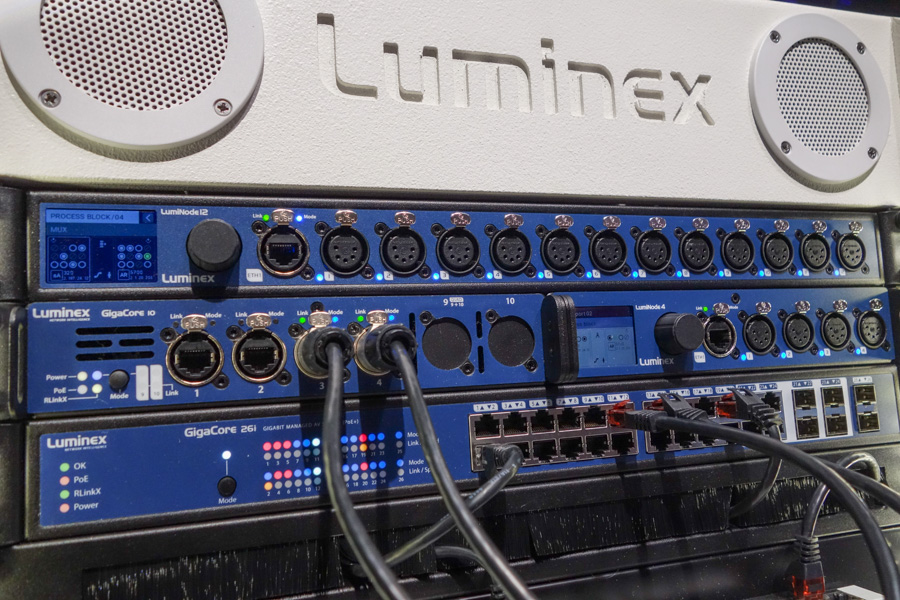 The Luminex demo rack with, from top to bottom and left to right, a LumiNode 12, a Gigacore10 switch, a LumiNode 4 and the fixed installation Gigacore 26i switch.

Until now, wether it’s sending or receiving data, mixing multiple sources, converting to one way or the other, or triggering internal modes or programs, it all went through the DMX ports. And that was enough until now for those with limited interfacing needs. 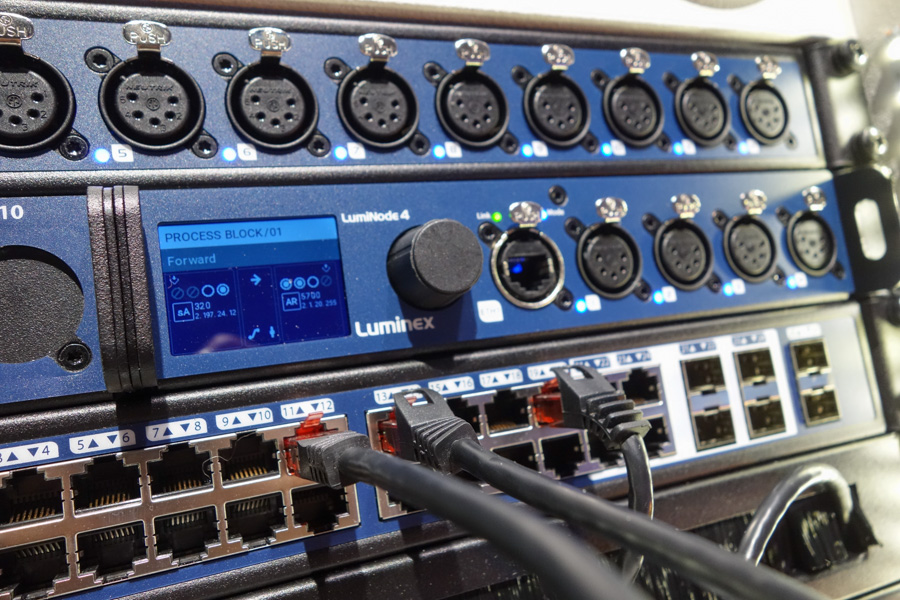 The LumiNode 4 is the most versatile unit in this range. Despite its compact format, it comprises a display with multiple indications.

However, whether in fixed installations or large tours, network operators are now faced with complex demands, such as providing multiple sources to mix, be it light control, video control, stage needs and emergency lighting for example.
The requests might also be to manage conversions between Art-Net and sACN data, more and more often outside the consoles that manage this aspect only by DMX512 universes, and whose parameters are rather succinct (for the advanced aspects of the network).

In practice, nodes are often inserted just to ensure a particular process, linking them to each other. This is why Luminex has built its new nodes, LumiNode, giving priority to processing blocks. These processing engines make it possible to ensure virtually all its complex operations without ever going through DMX ports.
The completely redesigned LumiNode interface, combined with the new network management software, Luminex Network Manager, provides unparalleled work and convenient organization for secure network management.

Each node includes RDM-compatible DMX ports with full optical and galvanic isolation, in the Luminex tradition and wealthy habits, with a RGB LED activity indicator. A 2-port EtherCon RJ45 switch is also included, with link, activity and use mode LED indicators. A contact closure also exists for fixed installations (in the event of an alert or an external command, it will be able to trigger a lighting data state internally, or any other action, in a future update of the firmware).

To give a didactic example, Luminex presented on its stand a case study of data flow transfer managed internally thanks to its Processing Engine.

The LumiNode settings are always accessible by any web browser, using their management web pages. A more advanced software, the Luminex Network Manager, will be unveiled in the forthcoming weeks, it will also configure and manage everything, individually or in batches.
This upheaval in the Luminex range, whose milestones will undoubtedly mark a crucial stage in the development of the networks associated with show technologies, will see the nodes and their softwares officially distributed in June. To face the first industry worries, each LumiNode can be switched on while choosing one of its two firmwares, the active firmware and an alternate-firmware, hence choosing to follow or not the latest updates.

With these processing blocks, new management modes have appeared: the forwarder function enables the conversion of one protocol to another among the following possibilities: DMX (from any DMX port of the node), ArtNet, sACN, BlackTrax, an instant data capture or another processing block.

The nodes interface, always available on the web page, is completely re-designed, based on the software Offline Editor Luminex. The identical DMX output assignments are now easily completed just by dragging and dropping.

It will also be possible, in the future, to capture a data stream in the LumiNode and play it in case of data failure, or from an external command.
Backup procedures are also made possible, with source by source back-up or by each universe in crossfade changeover.

Processing block cascades allow complex conversions or re-routing, for installations that have to meet particular constraints. Finally, in control rooms where several consoles coexist, HTP or LTP mixes are allowed up to 4 sources, by universes or by addresses’ batches. 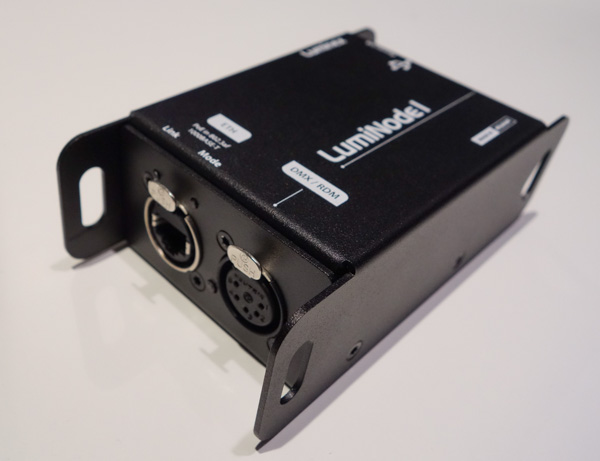 This node with one DMX/RDM XLR5 output is, by far, the tool that many network technicians eagerly awaited. With its single USB port for computer connection, it will allow, via a future software update, direct RJ45 connection to the “trunk” of its light network, to be able to manage all the switches and VLANs, thanks to the LumiNet Monitor or Network Manager software.

But it can also be used, with the power of its 2 processing blocks, to test and set parameters “on the fly” to light ensembles in RDM, without console nor complex system. Its sturdy construction, its 1 Gb EtherCon port, PoE power supply and pocket size are all designed to support technicians in all situations.
In addition Luminex has decided to lower its price to the lowest possible level, below 200 €. This commercial promotion made it so popular with many people who discovered and enjoyed the LumiNode 1 during the Prolight show, that it is already out of stock. 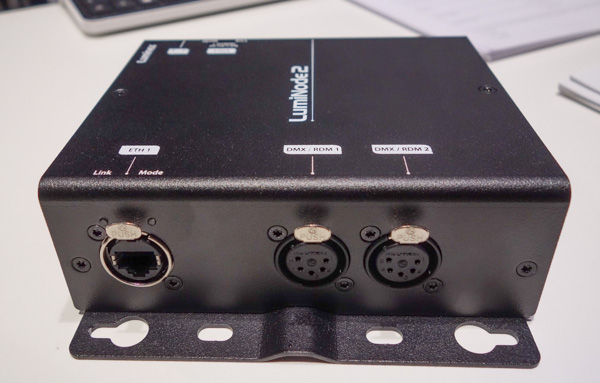 Rather dedicated to light installations, the LumiNode 2 is the smallest node in the range. Its format is intended to be hooked on the truss in theater or fixed to the wall, thanks to its hanging support.

It is equipped with 2 EtherCon 1 Gb ports with integrated switch, 2 DMX / RDM outputs with activity RGB LED and 4 internal processors. It comes without a conventional power cable, as it runs thru PoE power supply.

The LumiNode 4 is the most versatile in the range. In the half-U rack format, it perfectly complements the Gigacore 10 switches for all touring and festival kits, but can also be hooked up thanks to its M10 screwing hole.

With 6 internal processors and 4 DMX / RDM ports, a 2-port EtherCon switch and one of the LED indications, it will meet the majority of needs. Its main advantage over the LumiNode 2 is the presence of a real front panel menu with adjustment dialing jog wheel and a color indication screen, as well as a PowerCON or PoE power supply via one of the Ethernet ports.

The LumiNode 12 is the most complete in the range, comprising, in a rack-mountable 1U format 12 DMX / RDM ports, 16 processors and 2 Ethernet ports, with color display and configuration jog wheel.

The software is also able to display all informations such as the power consumption of the PoE devices, the status of the ports for the RSTP protocol, the connected AVB devices and their status, and the multicast groups registered on the switch.

Less expensive than the Node8 from the previous range, it is likely to prevail in all important kits.
Like the LumiNode 4, it has an array of LED indicators, and a choice of PowerCON or PoE power supply.

Luminex has planned a two-year roadmap to develop its software. It will first allow the administration of switches, then will come in the future the settings of the nodes, and finally the RDM equipment connected to Luminex nodes.
The revolution is now launched.