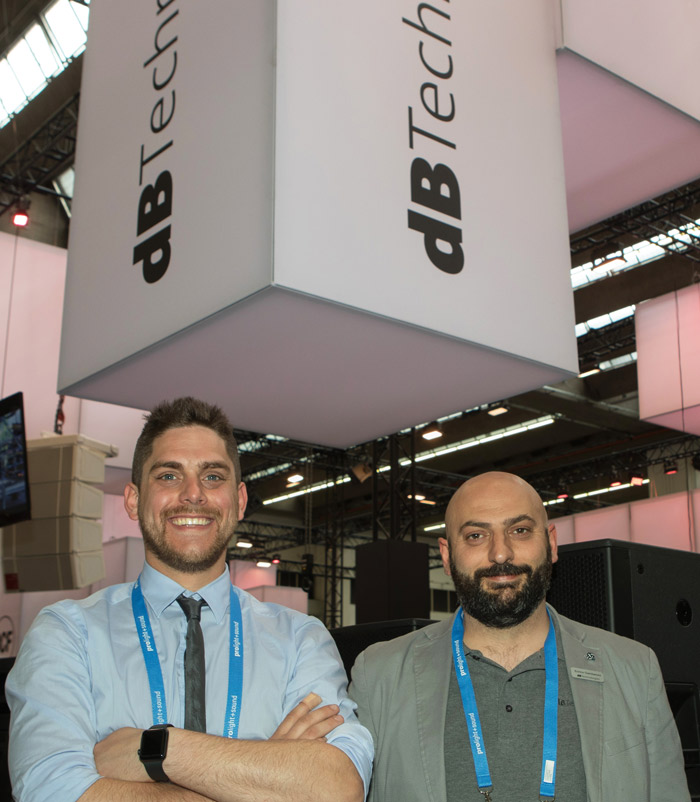 To answer our questions we met on their Prolight+Sound stand in Frankfurt the Product Specialist Marco Cantalù and Enrico Gamberoni, dbTechnologies’ engineer, as fluent in acoustics as in marketing, and therefore analysis and transmission belt between the two departments.

SoundLightUp : Where did the idea of an ultra flat wedge monitor come from?

Marco Cantalù (dbTechnologies Product Specialist) : We had discussions with the San Remo Festival teams, television channels and event service providers and they all told us they wanted to have “invisible” products. So we almost played around the idea and decided to start by employing compact transducers, but and still able to offer pressure and frequency response sufficient enough for professional use, without being “rock’n’roll”. 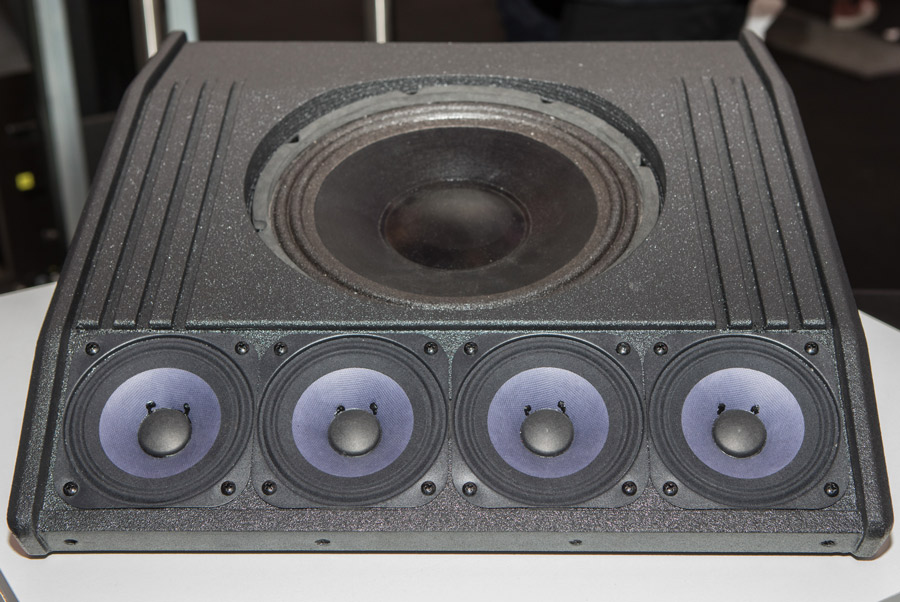 Ever seen a wedge monitor passed under a steamroller? Here comes the VIO W10, shown here without its protection grille. The grooves in the front have no acoustic vocation, they’re just here to lose a little more weight!

SLU : Other brands have used arrays of 4“ transducers since ages…

Marco Cantalù : So, we have four wide range 4″ and a 10″ extremely flat speakers. These five transducers are connected to a 4-channel DiGiPro G3 amplifier with a total peak power of 400 W. Two outputs of this amp are in bridge mode for the 10″, and the other two channels are used on the two 4″ external ones for one channel, and the last one on the two internally positioned 4″. A detailed view of the plate comprising audio, network and sector input and output ports, but also the local settings including the directivity of the mid-frequencies lobe: standard, tight, wide and deported.

This amplification set-up allows, via the internal DSP, to vary the directivity electronically by adjusting delay and filters. We have 4 positions. A normal, one where the lobe is enlarged, one where it is tightened and a last one where it is pushed back a few meters away which gives a wider use angle.

These four presets are inserted and selectable directly from the W10, but as it has a network port, it can also be controlled remotely. The connectors are IP65, which gives it the opportunity of outdoor use, and it could in the future be used as well hanging on a wall to further reduce its space on the ground, for example in a small jazz club.

SLU : The loading volume is compact, and I do not see any vent…

Enrico Gamberoni : There’s none. We went for closed load. This wedge monitor is a complex project, as we have different time alignments with the five transducers, and bringing in a vent with its turbulences would have complexified the whole lot and reduced the efficiency of the electronic waveguide.

I told you this wedge monitor IS flat, here’s the proof. Pay attention to the additional slit underneath the bottom part of the cabinet, designed to let all the cabling (audio, mains, network) pass discreetly through the loudspeaker.

SLU : Is it ready to take all the beatings a wedge monitor usually undergoes?

Enrico Gamberoni : Absolutely. It’s easy to carry around, less than 14 kg lightweight, and its grille is reinforced and step-proof. You can walk on it, the transducers are well protected. The max. SPL is 126 dB and the frequency response reaches 68 to 14 000 Hz at -6 dB. This opens the doors to TV sets, events, and all cases where the « low profile », in every term, is of the upmost importance, and more important than strictly power and dynamics. This is typically a niche product, ready to meet a lot of needs and peculiar requests.

Second new product unveiled at Prolight+Sound, coming in two models, the X205-60 and the X205 -100. This is a small point source speaker designed around a 1.4” driver with constant directivity waveguide, with either 60°x60° or 100°x100° directivity, and in both versions flanked by two low frequency 5” woofers.

The VIO X205-60 without its front grille. For better and faster recognition, the front grille, also acting as phase coupler for the two 5“ transducers, bears a “60 x 60” mark on its right. Otherwise, just look at the depth of the driver, if it’s recessed then it’s a 60° version.

Enrico Gamberoni : Active, 2-way. The filter acts @ 1.5 kHz. The amplifier module is also home made. It is a DiGiPro G3, same generation as the one inside the W10 wedge monitor, it is very flexible indeeed. The big advantage of this little loudspeaker is that it can reach 85 Hz at -3 dB with its two 5“, which means for a conference I don’t need anything else. Via RDNet, I can program in the on-board DSP a delay up to 20 meters, so its use as lipfill is very simple indeed.

Look above the VIO S218 stacks in the listening area, these are actual X205s.

The max. SPL is 126 dB. The two openings bring a lot of versatility. At 60° the throw is enhanced, at 100° it is more pleasant in close reach. It can be hung in any way you need, and has a bottom hole for pole mounting. Despite its size, the cabinet is made of wood and its total weight is 7 kg only. The number of applications is almost infinite, stage, theatre, event, worship halls…

The VIO X205-100 mounted on its yoke, one of the many ways you can install it. son étrier, un des nombreux moyens de l’exploiter. Notice the two vents top and bottom of the enclosure.

Enrico Gamberoni : They are indeed. First of all, we made the choice to work with the same measurement norms on all the VIO range, dans the GLL files are downloadable directly on our Website. Regarding the max. SPL, we integrate pink noise during 5 minutes with a peak factor of 6 dB.

We do this in our anechoic chamber, where we have a robotized arm, allowing us to find the best measurement point in the polar field, then we position the microphone at 3.25 meters distance, and then recalculate the value at one meter. Regarding the power delivered by our modules, it goes the same way. We don’t artificially overestimate our data, since the watt by itself doesn’t really mean anything. 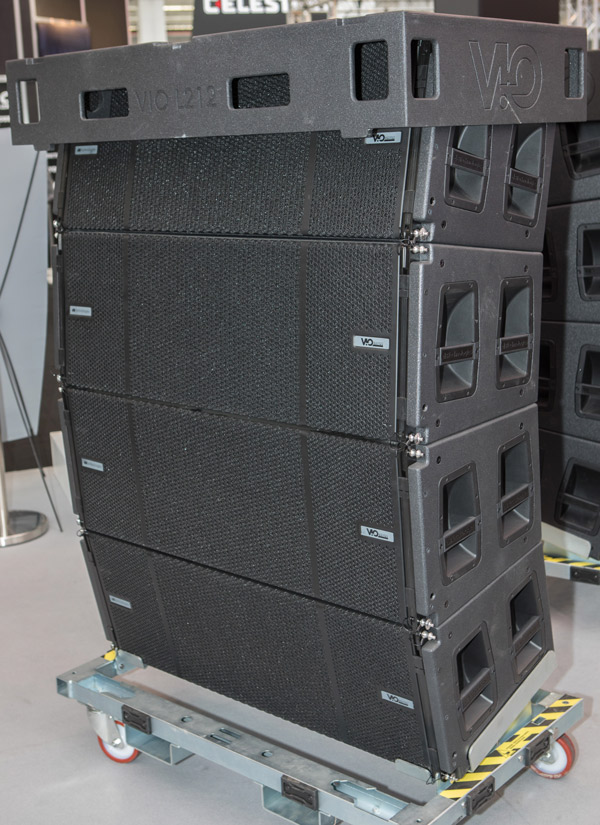 Four VIO L212 on their dolly, it is the VIO range flagship and a very nice unit, musical and rock at the same time.

Knowing what the unit can handle is no big deal, opposite to what SPL it can deliver. (laughs) It is the same with the settings of our protections.
We don’t fool around with the SPL war, limiting in multi-bands the low frequencies before the other bands, just to display some extra dBs, at the expense of the general rendering quality. When we start going into limitation, we do it over the whole spectrum to preserve the sonic balance.
More information on dbTechnologies Website.