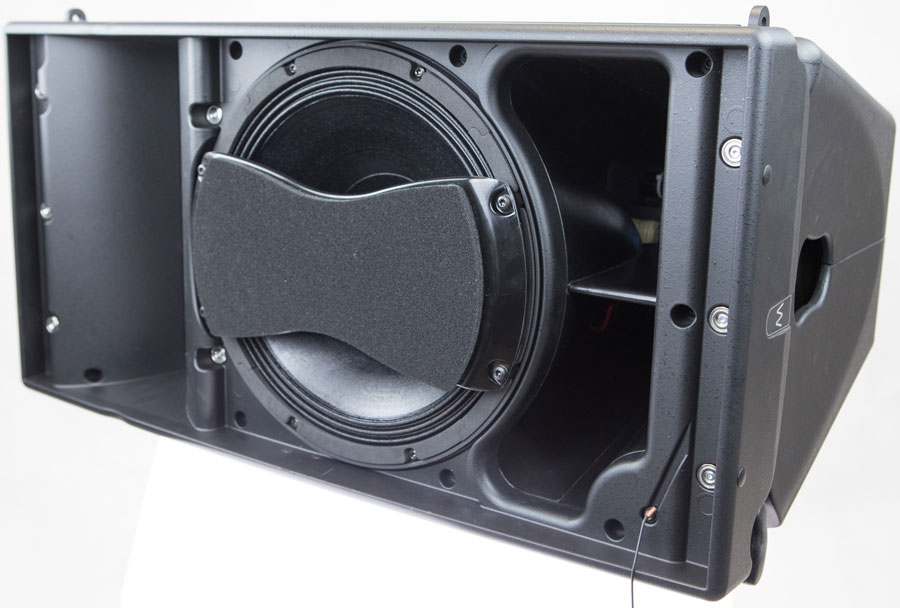 New implementation at the upper end of the GEO M range, the M12 provides the ability to cover large areas with a versatile, lightweight, powerful and affordable product. Same size and equipped with a single 18” speaker, the MSUB18 complements the Nexo offering.

Following the successful S12, having sold more than 30,000 units, the M12 sets the tone by delivering 3 dB SPL more than its predecessor and 4 more than the M10, while dropping the wood of the former GEOs for injected Composite Low Density – Polyurethane, more resistant, durable and adaptable to complex shapes. 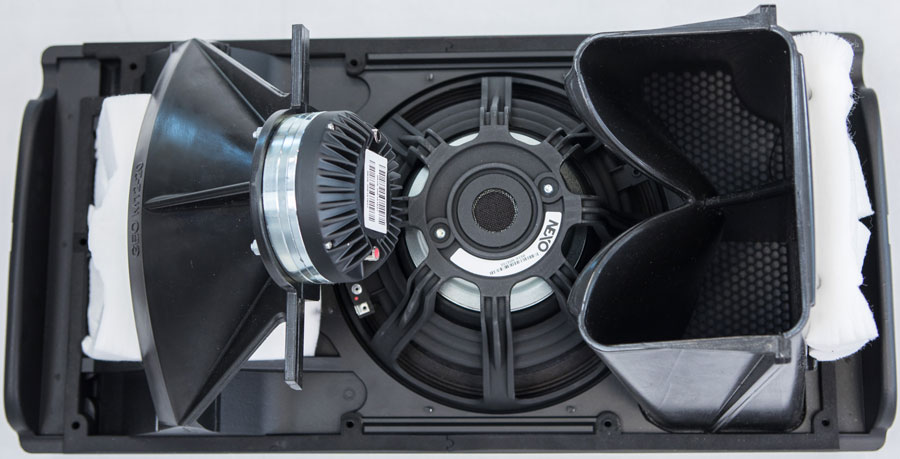 Big advantage of an injected polyurethane shell, a few screws are enough to give access to the transducers. Notice the inscription on the GEO M1220 guide, as well as the huge vent. The two wings on either side of the driver are used to block it in the other half-hull also housing the passive filter. Two small fleece pads and the 12” driver complete the M12.

In detail, the new 12” gains for example 30% in terms of excursion and cooling compared to the (already very good) low transducer of the S12 and keeps the phasing PDD part which gives it a small size transducers behavior and coupling with the treble driver, without sacrificing the extension in the low frequencies characterizing a 12” speaker. The completely redesigned vent, taking advantage of the advances previously undergone in the STM range, allows for a quieter air flow but also a higher bass output level. 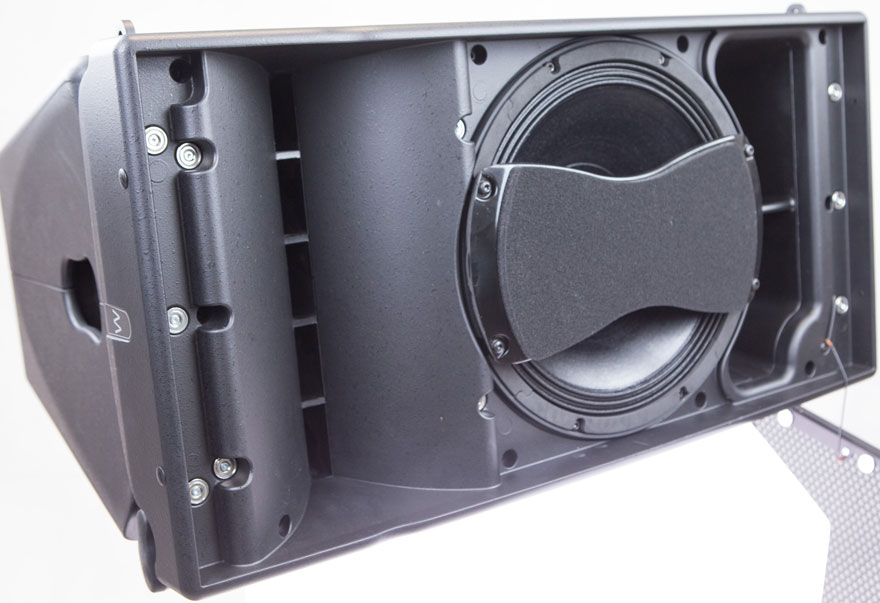 The M1220 waveguide, as easily accessible as the 12” once the metal protection you can guess hanging on the right hand side from a small steel sling is taken off. The silver pellets on the front panel are nothing but very effective little neodymium magnets, some holding the grille, some the magnetic flange that comes clipping in front of the guide.

The 3” voice coil, 1.4” throat Neodymium HF driver is built according the HRW patent and, thanks to Nexo’s advances in F.E.M. (Finite Element Method), the waveguide gains precision and control with a choice of two vertical directivities, 10° or 20° (hence the M1210 et M1220 model references), but the horizontal directivity can vary as well from the nominal 80° to 120° in one click, once the front face is open, all easily and quickly done.

Le M12 is equipped with a passive filter set at 1.1 kHz, but it can be set to active mode by pushing a recessed switch on the back panel. The amplification can be supplied either by a NXAMP4x4 loaded with 3 M12 in passive mode per amp channel (nominal impedance of 8 ohms in passive mode), or in active mode, still with 3 M12 per channel (LF impedance 8 ohms and HF 16 ohms). 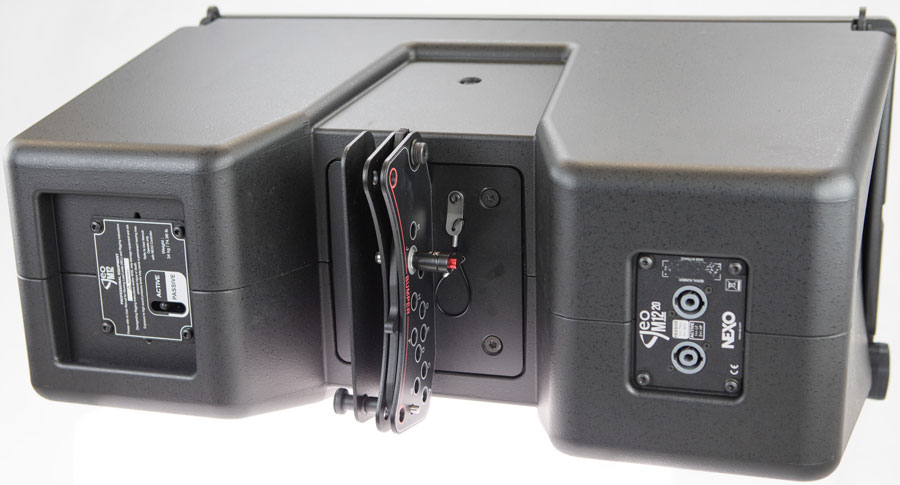 The rear face of an M1220 with (left to right) the switch between active or passive mode, the angle adjustment and rigging points, very massive, with all loose parts captive, and finally the pair of Speakon in/thru connectors. You can guess below right the Autorig lock. 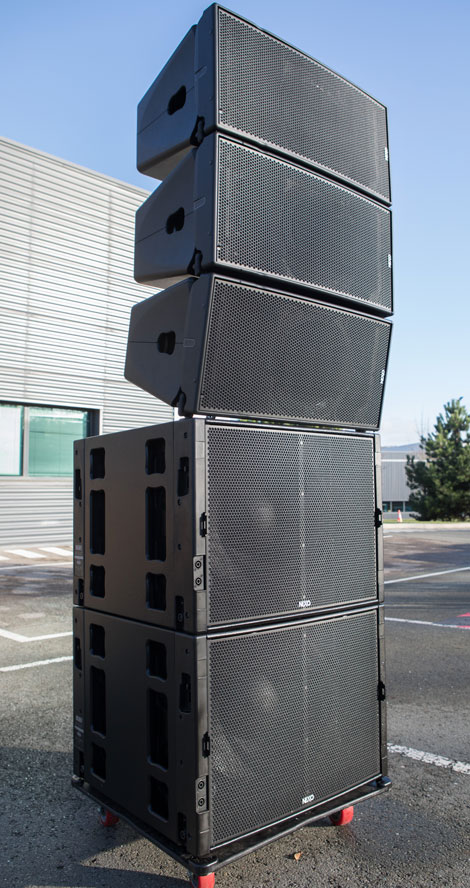 A very classic but effective combination consisting of two MSUB18 and three M1220. We can guess the 18 ” in the two sub cabinets. The whole right side of each of them is merely a very big vent. As it should, each sub has connectors wired in parallel on the front panel to ease cardioid cabling.

The rigging is very intuitive and fast, and relies on an automatic system called AutoRig. 12 boxes or 8 subs can be hung on one Touring Frame, with 7 angles adjusted from the back without any loose part. There is of course an Installation version in addition to the Touring one, with simplified rigging and a wide choice of RAL colors, and a bonus IP54 rating.

The sub coming with this new system is named MSUB18 and, thanks to the internal positioning of the 18-inch transducer slightly angled in a hybrid arrangement between bass reflex and bandpass, it has all the air it needs and can be hung on top of a line array, as its width is the same as of the M12, i.e. 70 centimeters. Weighing 55 kg and existing with or without Touring fittings to be permanently installed in a venue, it is made of Baltic birch ply.

Taking up to 2,000 Watts @ 4 ohms, the transducer, with very long excursion and of course neodymium magnet, is none other than the one present in the STM range, so we find its same vitality here with a sensitivity of 107 dB and a Max SPL of 139 dB!
The very large vent allows it to give all its energy on a relatively wide spectrum, considering that its response in nominal frequency response @ -6 dB ranges is 32 to 120 Hz. 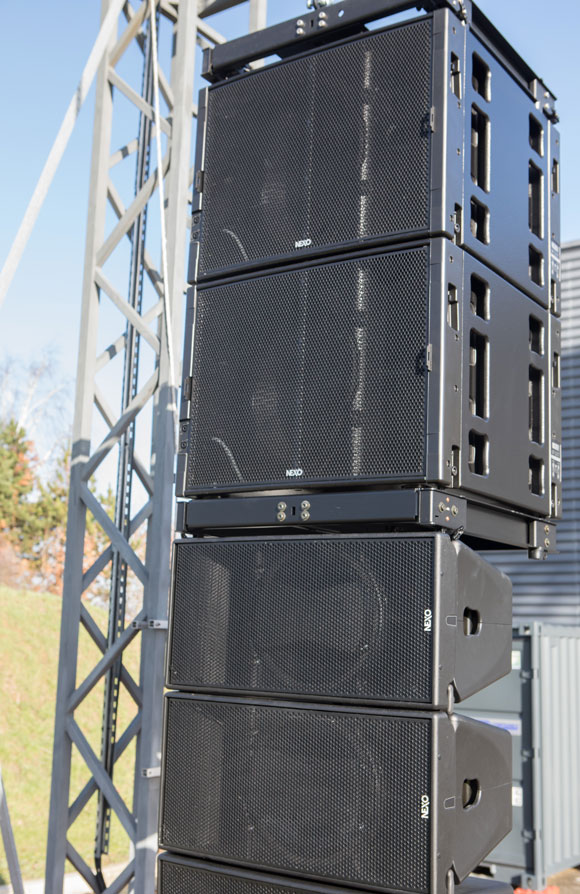 Two Touring Bumpers, which can be used at the same time to hang mixed lines of cabinets or to provide the junction between MSUB18 and M12 models.

It is possible to filter it, either in “infra” mode to boost the first octave from 29 to 65 Hz, or gradually extend its bandwith to handle the 29 to 120 Hz range.
5 choices are possible. The NXAMP4x4 controller accepts 2 MSUB18 per channel in parallel, the NXAMP4x2 only one and the NXAMP4x1 one, on two channels in bridged mode.

An important number of accessories comes with the launch of this new system, giving it all the versatility required, either rigged in Touring version, stacked the ground, or finally in a fixed installation version.

We had the opportunity to ask some questions to Joseph Carcopino, Nexo’s Head of R&D, the ideal guy to define precisely what a product is.

SLU : What sets the STM apart from the M12 while designing a system ?

Joseph Carcopino : The distinction between an enclosure of the STM series and GEO M, is simply by what I’d call the density of power.
In a given volume, we place more transducers in the STM (I think for example of the two 2.5” drivers inside the M28) than in the GEO M, where there is only one 3” driver, and the STM M28 is lower than the M12, but in a line-array it is that ratio that will give you either the power or the long throw. But some STM technologies are being used in the M12, such as the vent, the flanges or the work done on the waveguide and cabinet manufacturing.

SLU : So, the difference is in the number more than the quality of the transducers? 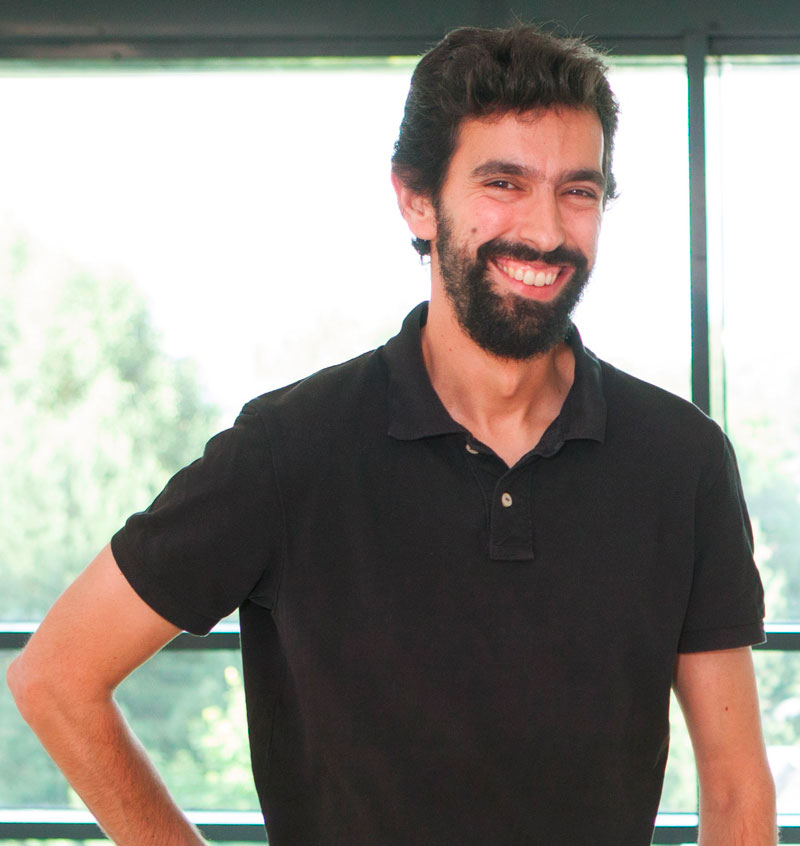 Joseph Carcopino : Yes. Especially since in both cases they are excellent transducers.

SLU : You have to switch between big and small systems so that ideas can flow from one to the other?

Joseph Carcopino : Exactly. We must alternate between technological innovation and industrial innovation. Today we are transferring technologies still reserved a few years ago to a high-end product range with greater diffusion and the other way around, because industrial advances will reflect positively later, which could in the end lower the price of some of the components inside some future big system.

SLU : Will you go more for molding in the long run?

Joseph Carcopino : We have the chance to master this technology because, if I may say, we mold “at home”, but we also have a very good carpentry department and I do not think that one technology is better than the other. Polyurethane has a very good resistance in time and under difficult atmospheric conditions, on the other hand for stage monitors or other more specific speakers like sub cabinets, the wood keeps all its interest. 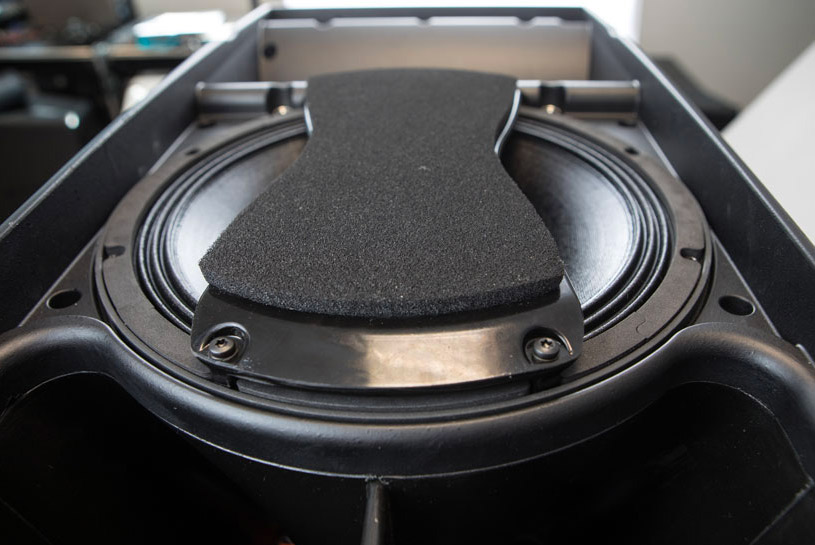 The 12” transducer and the DPP ensuring the phasing and the best alignment between the bass speaker and the hi freq. driver. The foam glued on it guarantees the absence of vibrations with the front grid at high power. The vent design is quite like its size: impressive.

SLU : What is the positioning of the MSUB18. SPL, Infra, higher bandwith?

Joseph Carcopino : It is designed on purpose as compact with single 18 ” and is expected to be flown which will allow to comply more easily with the new French Noise Limitations standards by limiting the SPL level nearby. In addition, the theaters do not like the subs on the ground.
To hang it, on the other hand, you have to have a very good efficiency because you lose the ground coupling effect, and to achieve that, you just build an array to tighten the radiation pattern that can be “pulled down” electronically in the NXAMP.

SLU : The load design in the sub seems simpler than the usual Nexo.

Joseph Carcopino : Absolutely. We’ve been looking for efficiency and impact, so we’re very close to a bass reflex. We wanted to be effective up to the top of the sub bandwith to better handle its energy between 100 and 120 Hz, which is not pleasant when stacked on the ground, but very useful when flown. it is also tuned low, and with its very large vent it can also make your pants fluffer! 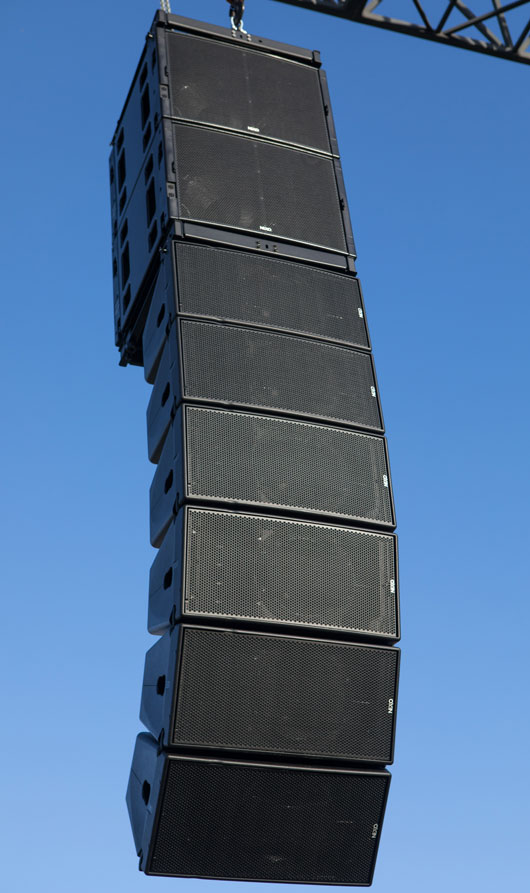 A stacking ratio recommended by the manufacturer: 2 subs for 6 M12 in the blue sky of Plailly, France.

SLU : The active / passive difference in the M12 is paying its dues in terms of amp channels, but what of dB extra gain?

Joseph Carcopino : We are lucky to have very powerful amps in our range, so everything goes well even in passive mode, but in active mode we can deliver three more dBs, measured and effective, which allows us to go tickling the big systems.

SLU : Is the M12 in the pipeline in EN54 version, to be able to be installed in stadiums, for example?

Joseph Carcopino : It is launched in Touring and Installation modes, this last version comes with a cable gland instead of chassis connectors, a special fabric on the front grille and a simplified rigging, which makes it even more economical without losing its acoustic qualities.
It is certain that we will target the stadiums with this model, especially as the plastic lasts longer than wood, but it is not expected to work an EN54 version for this speaker. The S12 remains our preferred solution to offer the Comfort / Evac versatility.

SLU : What are the availability dates of the M12, its presets and its sub?

Joseph Carcopino : From January 24th on, and we already have a very nice stock (laughs) The preset is done and we love what we hear, but we will make it evolve with the feedback from the first users and adjust it accordingly.

Joseph Carcopino : Of course. Like all Nexo products, it is possible to mix any product in the range. Everything will be perfectly in phase.

Joseph Carcopino : Typically 2 x 6” models for the M10 and 2 x 8” models for the M12, and there are loads of them on the market (laughs). But there are many arguments in favor of one 12” that brings more low extension in the bass frequencies than two 8”, not to mention the versatility brought up by the different possible coverage angles! 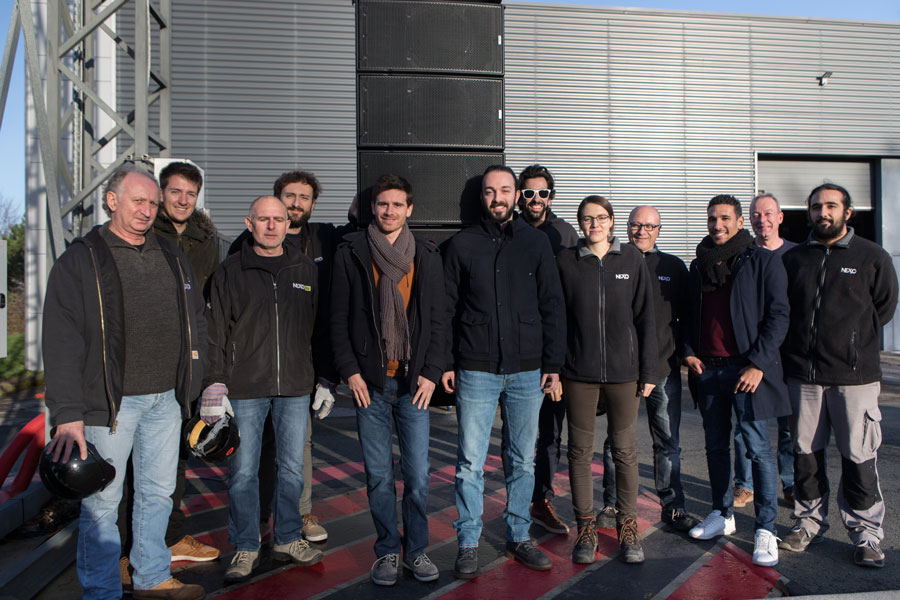 We unfortunately couldn’t listen to the M12 during this report, but we’ll certainly do so in the forthcoming weeks, and then add another in-depth chapter to this first presentation.