The R&D at SIXTY82 has developed the ALPHA82 connector, a structural support component, in other words a cornerstone for all kinds of structures, especially those that aren’t necessarily available as standard. The Alpha connector, held by Xavier Drouet, one of the founding partners of Sixty82.

In addition to its modularity, the advantages of this genuine innovation in the world of trussing, can be measured in economic and ecological terms. 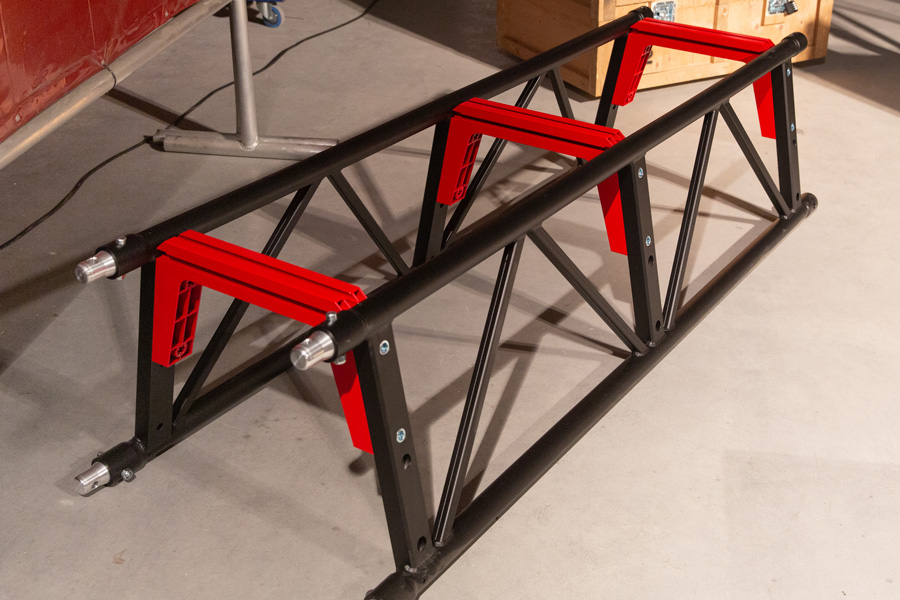 An open truss assembled with the ALPHA82 connector. It’s a pity that the standard color of the system will be aluminum gray, but any color is available upon request.

The SIXTY82 team organized a launch event for the ALPHA82 system at its production facility in Drachten, in The Netherlands, attended by distributors from all over the world and their own customers, to unveil the most important innovation of the last 30 years.

Axente, the French distributor for SIXTY82, has chartered two sleeper buses to take a number of its loyal customers to their destination in comfort. We headed for Drachten at nightfall after checking our health passes and an antigen test, to make absolutely sure we weren’t going to generate a Delta cluster. The impressive group of SIXTY82 customers invited by the French distributor, Axente, in front of the sleeper coaches.

After a good night’s sleep, we arrive fresh and well-rested in Makkum, at the north-eastern tip of Holland, to embark on an old sailing ship, the “De Boekanier” to sail Lake Ijsselmeer.
The launch ceremony for the ALPHA82 is scheduled for the late afternoon, so we have time to sail in the early morning, under a timid sun, towards the North Sea, bathed in the spirit of the Dutch navigators of the 17th century. 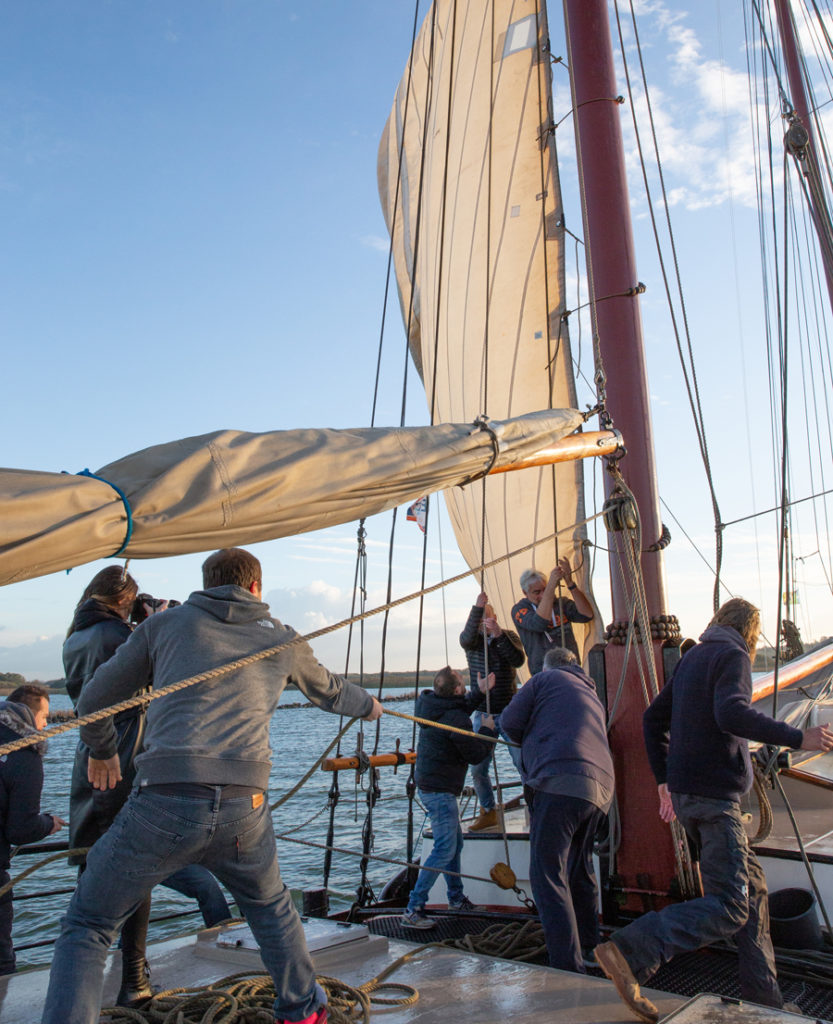 It’s time to hoist the sails and… 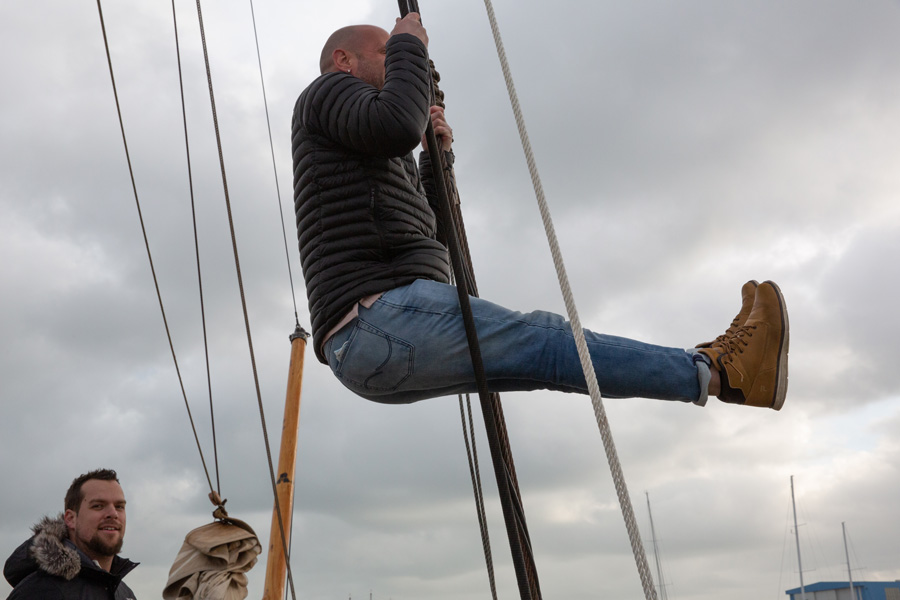 … a few hours later, and after a few swings… 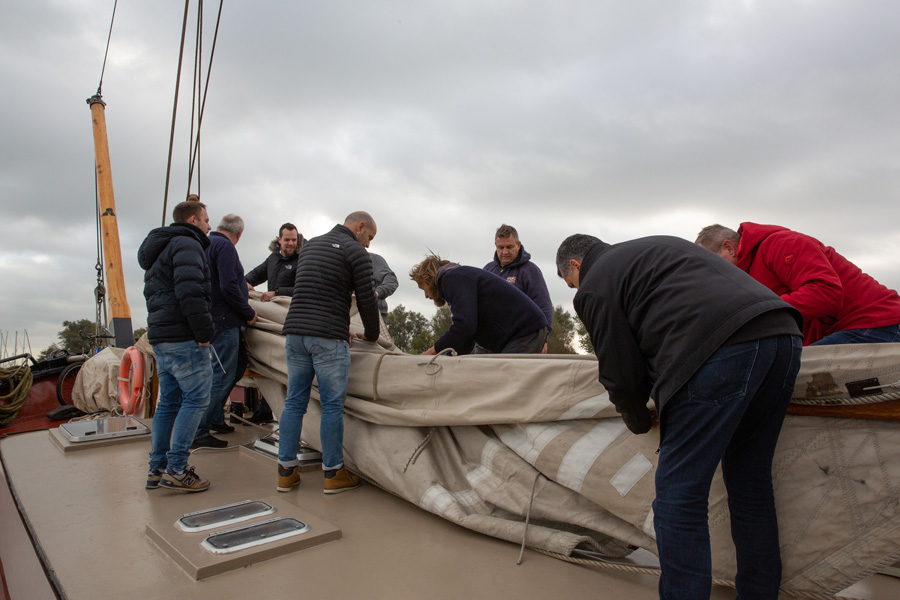 … to stow them before coming into port.

And we discover that many show technicians are well qualified as sailors when it comes to hoisting the heavy sails. But, since we have one-track minds, our conversations quickly return to the subjects that concern us day to day: new Ayrton fixtures, the latest MA3 software release, and questions about the new structure that awaits us! 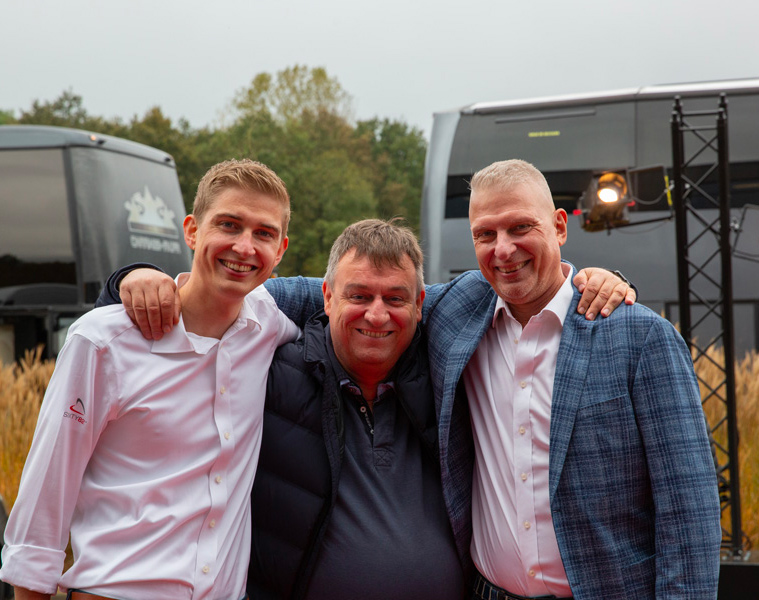 Reunion time: surrounding Xavier Drouet are Fokko Smeding, CEO of SIXTY82, on the right, and his son Rainier, CCO, on the left.

A red carpet and management team, dressed to the nines, await us at the entrance to the modern 4000-square-meter building. After almost two years of videoconferencing, the associates are very happy to be meeting in person again.

Founded nearly four years ago by three groups of experts – English, French and Dutch – SIXTY82 is a young company with a wealth of expertise at producing aluminum structures.

The team is made up of the Englishman Adrian Brooks and his son Lee, specialized in the manufacture of custom-made structures for the big international productions; the Frenchmen Jérôme Bréhard, Xavier Drouet and Alain-René Lantelme, distributors of structures for 30 years; and the Dutchmen Gert Felten, Marc Hendriks, Ronald Seinen and Fokko Smeding, inventor of the truss with conical sleeves. In just four years, they have succeeded in bringing together 34 of the most influential distributors in the world in the structures market. The headquarters and production facility, 4,000 m² in Drachten.

At this plant, SIXTY82 carries out aluminum tube cutting, truss assembly and welding, and quality control testing with certified personnel. 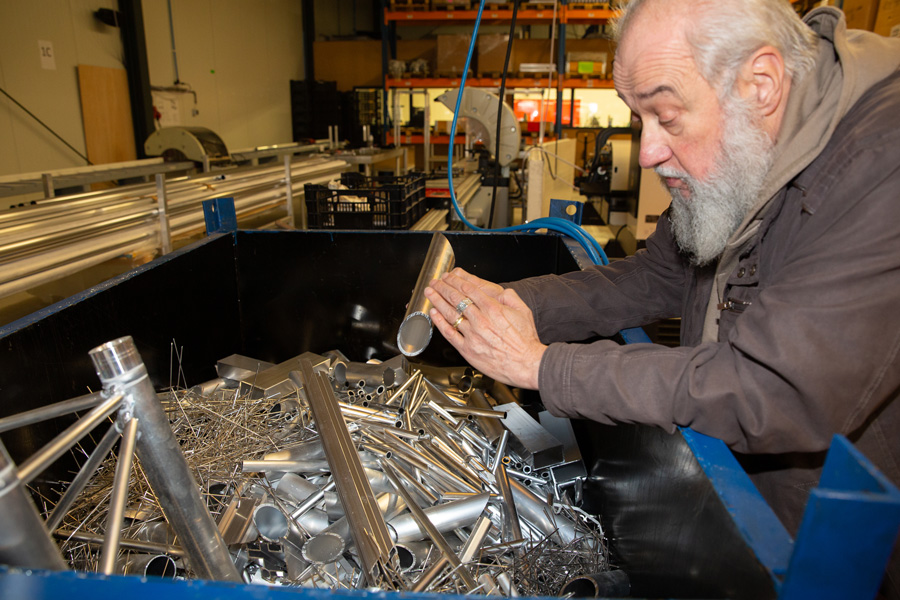 Alain-René Lantelme, deputy CEO of Axente, guides us during this visit. Here, the discarded pieces that are destined to be recycled.

The raw materials, such as aluminum tubes of different cross-sections, machined parts like male and female couplings and the steel parts, are sourced from European metalworks.
Similarly, the stage decks made of Finnish birch plywood and coated with phenolic resin are supplied by industrial carpenters and cut at SIXTY82.

Their production equipment, which we peruse as we walk through the production lines, consists mainly of bending stations, semi-automatic and manual welding lines. 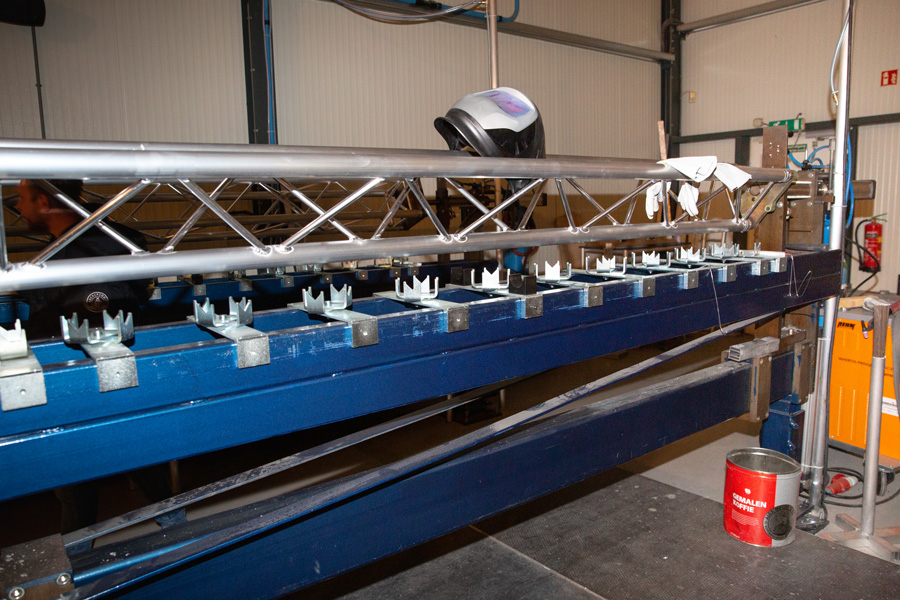 One of the six height-adjustable welding benches. Once the tubes are held in the jigs, the crossmembers are positioned on guides and the welding is done manually.

“Semi-automatic welding,” explains Alain-René Lantelme, “saves time and allows us to obtain a nice uniform weld on the female sleeve at the end of the tubes as they rotate. Next comes manual welding of the cross members when the tubes in question are assembled on jigs”. 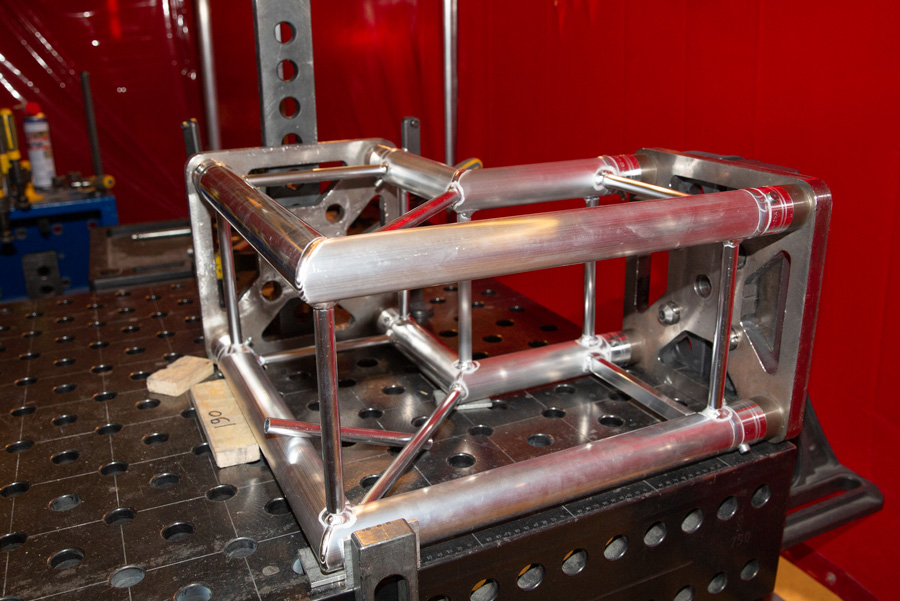 A welding station for the corners.

We note that the welding benches are height-adjustable for the welder’s comfort and to help improve the quality of the welding process. We also note the presence of tube torsion stations, which can adjust the axis by ¼ of an inch, so that the holes are well aligned.

You can appreciate the uniformity of the welds. 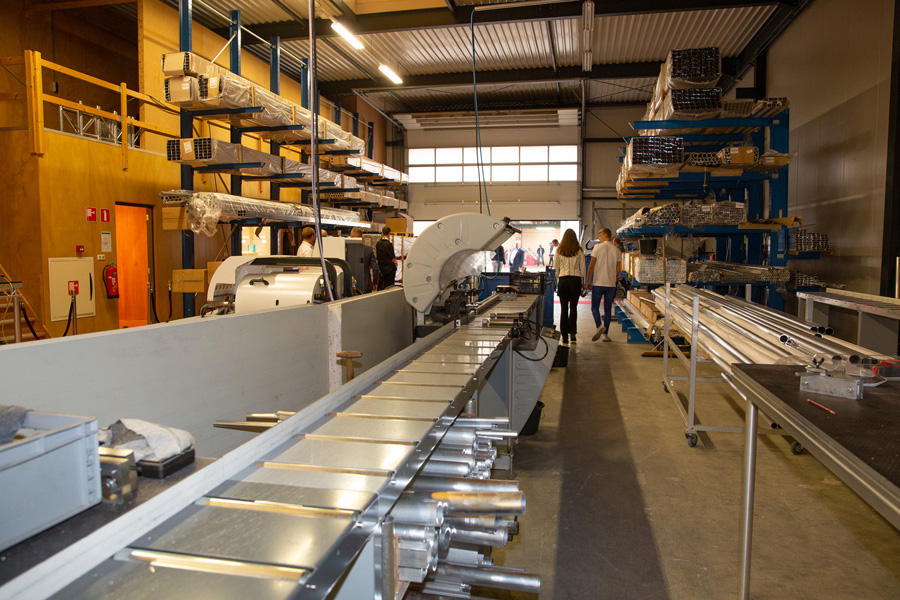 “On the whole,” continues Alain-René, “every truss on the planet is made this way, but it is the quality of the alloys, the jigs, the alignment, the welding stations, the quality control, the certification of the welders and the investment in production tools that make the difference”. 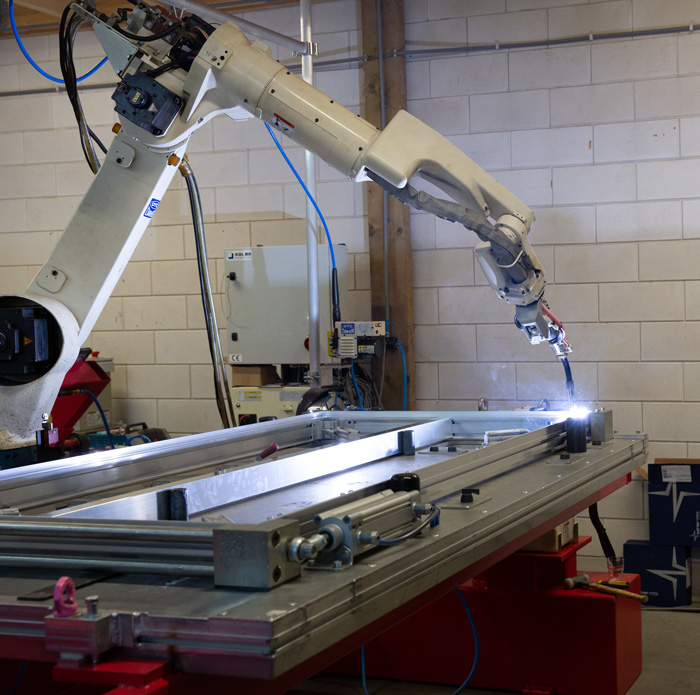 Speaking of investment, we discovered a brand new robot designed to weld the frames and supports of the stage decks.
The different dimensions of the decks are programmed and, after manual positioning of the tray and the supports at the four corners, the robot automatically welds the components. 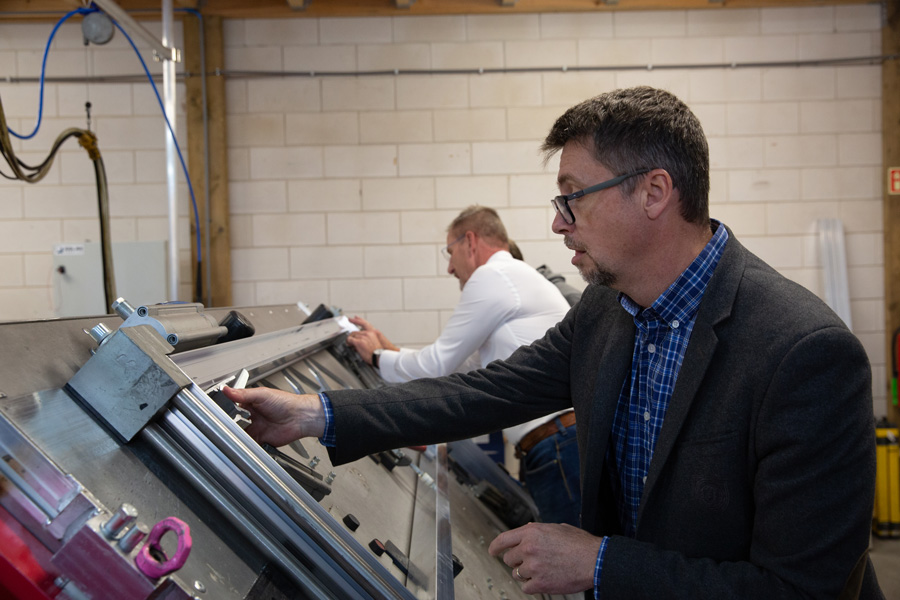 One just has to position the deck and the supports for the legs, which doesn’t require a certified welder – as confirmed by Jérôme Bréhard, CEO of Axente.

It’s always fascinating to see a robot in action, plus it’s the only one working on this holiday and Weldy has a lot of fans. He is eight times faster than a human and provides a nice and consistent weld quality.
We won’t get to see all of this factory, since the equipment in many areas has been pushed up against the walls and hidden behind drapes in order to accommodate the guests. 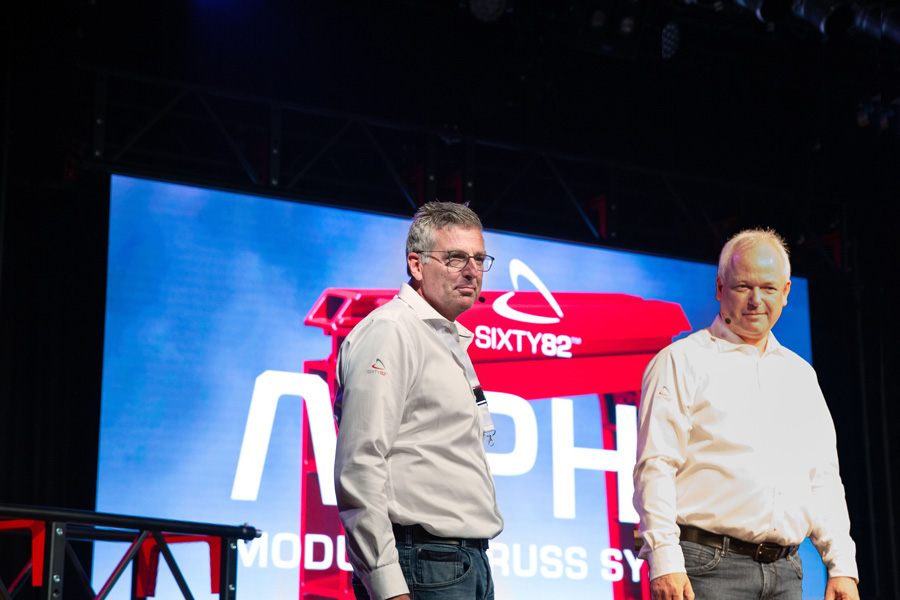 It’s time to unveil the new product. Its called ALPHA82, a modular truss system, which can be configured to suit your needs. It is the subject of an international patent.

ALPHA82 consists of an extruded and machined aluminum connector, similar in shape to an arch, onto which ladder trussing with a width of either 52 cm or 101 cm are bolted, to form 3D box trusses. 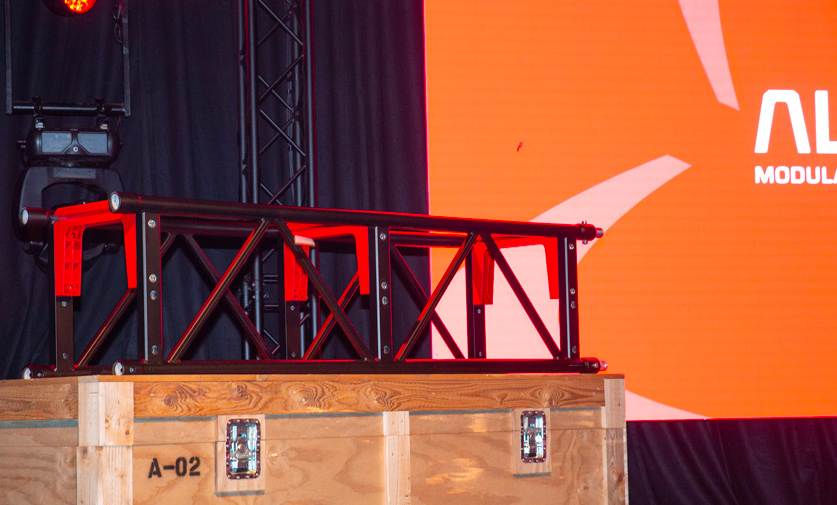 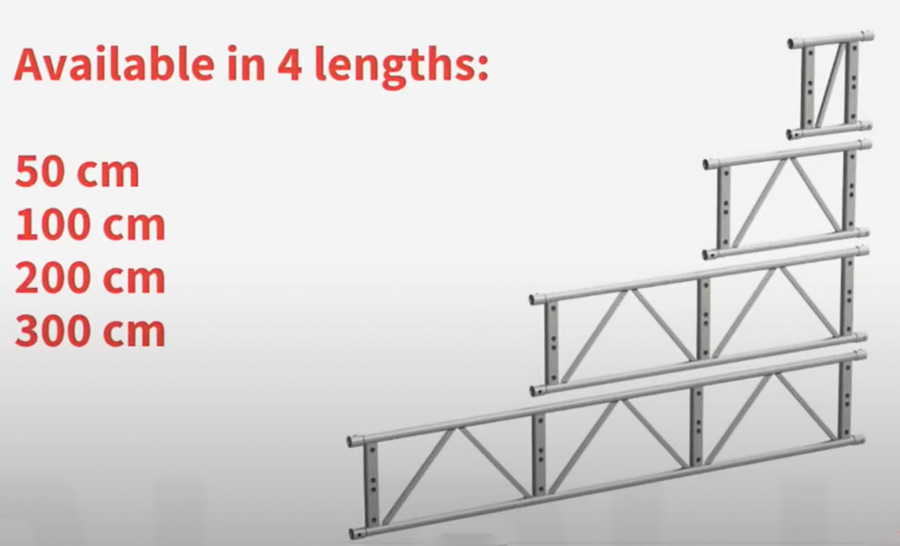 The ladder trusses are available in two widths, 52 cm and 101 cm, as well as in four different lengths. 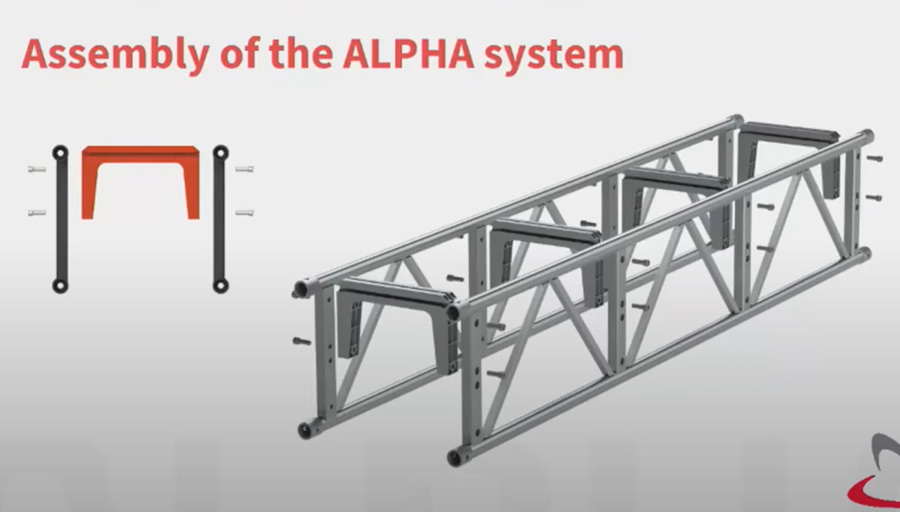 The assembly of the ALPHA82 system.

What’s more, this ALPHA82, connector, which is available in several versions, has M12-size slots on four sides for connecting accessories: hoist rings, clamps, brackets, curtain rails, struts… Anything is possible! 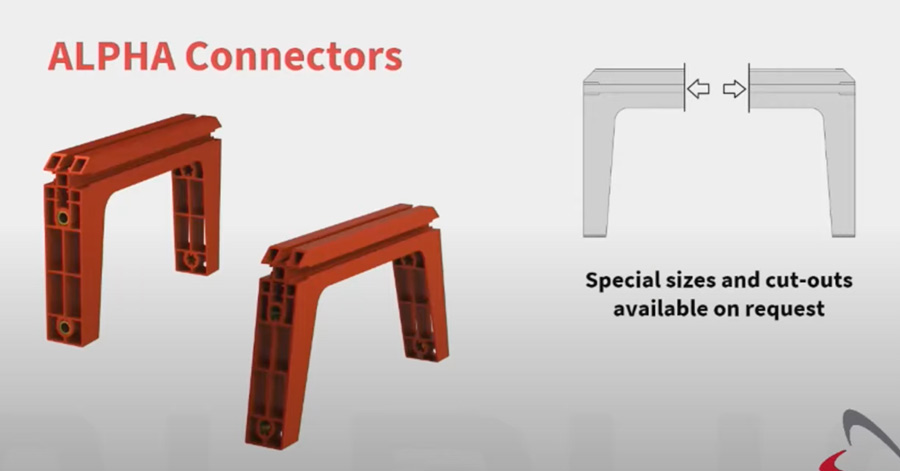 The ALPHA82 connector is available in two standard versions and several sizes, while cut-outs are available on request. 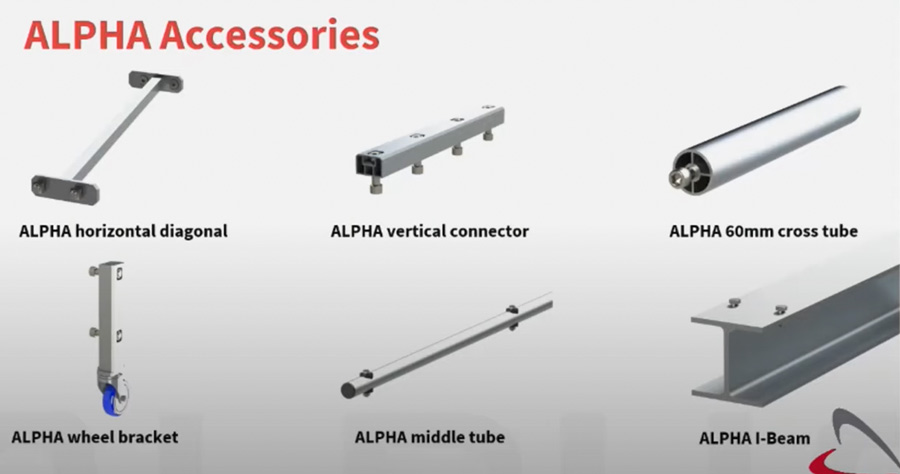 Rather than a lengthy explanation, here are a variety of possible assemblies to give you some ideas of the solutions that can be created: stackable open trusses, pre-rig trusses to accommodate chain motors inside the truss, putting an IPE beam inside a trolley, assembling a trolley with a motor inside, building a truss integrating LED screen supports to save clearance, easily doubling a truss for a specific need.

So obviously, we are not going to have fun dismantling standard trussing after each performance, but, rather, thinking about the shapes that can bring solutions to recurrent needs in a production and storing them assembled.
On the other hand, it turns out to be quite cost-effective to build them like a Meccano set for specific needs, for events or on tour. This means that you don’t have to store large parts all year round or rent them out. The ALPHA82 system is also ideal for integrating into fixed installations. 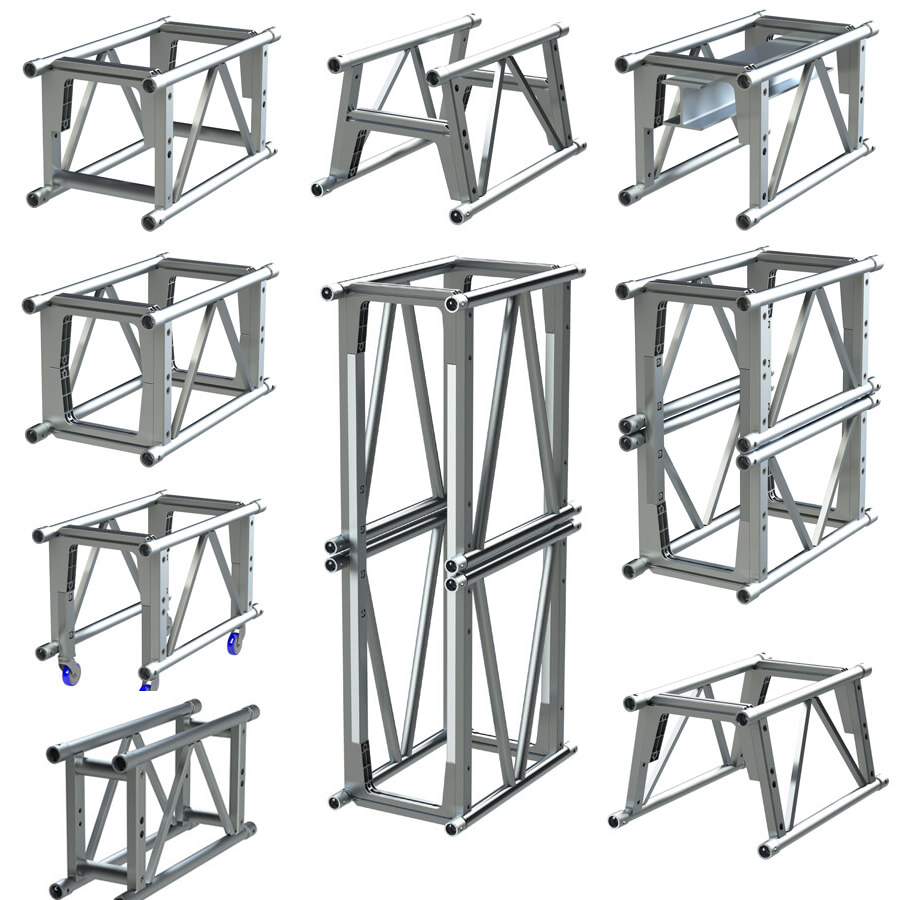 The ALPHA82, kit is child’s play to assemble.

And in the specific case of costly transportation, the advantage will be that the structure package can be transported in parts to reduce the volume by 75%.
Considering the increased shipping costs, it seems worth the investment.

To define the load tables, SIXTY82 provides all the calculation information regarding all the possible constructions.
And as for the modeling, which could appear to be a headache, the quick solution is to make a rough calculation, by entering the general load values of a square truss, for instance, into the computer.

Innovation in the structures sector is still possible at SIXTY82, who have it in their DNA. And Fokko Smeding, the man behind the small conical sleeve, together with his team of experts, undoubtedly has more to contribute.
After this presentation, which was enthusiastically received by the guests, an exceptional evening awaited us, offering many attractions for food lovers, casino fans, dancers, rock fans or simply those who were looking forward to chat with friends who have been out of touch for the past couple of years.