After taking over the Martin distribution in France almost 3 years ago, Algam Entreprises company was pleased to unveil as an European premiere a brand new series of projectors, the Era series, with no less than 6 models, including a 800 LED moving head and a lamp-fitted waterproof hybrid IP65 moving head. In between the Rush family and the reference Mac, this new line is developed by Martin for Harman Professional Solution. Designed in Denmark by the Martin R&D department, these projectors are manufactured by third party factories following precise technical specs, and a reduced cost to relieve the portfolio of loyal customers to the Danish brand.

Hybrid and waterproof projector, the Era 500 is ready to face the elements piece of cake. Equipped with a Philips Platinum 18R 350 Watt discharge lamp, this IP65 projector promises an almost unreal flow of 22,000 lumens with a color temperature of 7800 K and a lifespan of 6000 hours. The Era 500 is the first IP65 projector designed by Martin.

The set of optics allows a zoom ratio of 1:20, from the sharp beam of a 2 ° beam to the wide coverage of a 40 ° spot, augmented by a special Wash filter.
As a complete machine, its CMY color mixing system is complemented by a 9-color wheel including a variation of CTO filters in Full, ½ and ¼. A wheel of 15 static gobos sits next to another 9 rotating gobos one, helped by two sets of circular and linear prisms capable of operating simultaneously, for even more effects.

While the Era 500 emphasizes its resistance to humidity and dust, it also has resistance to correction C3-M and impact protection IK07, essential to withstand all the harsh constraints of outdoor installations. Its menu and all of its DMX and EtherCon sockets are of course waterproof, covered with certified Outdoor caps.

Like all waterproof projectors, the Era 500 has a rugged body, ridged in many places to help cool it down. Its substantial weight of 46 kg is balanced by the now usual presence of a pair of additional handles at the top of its head.
The Era 500 IP should be available April 2020.

At the start of 2019 we had discovered (at ISE Amsterdam) the small Era 300 Profile spot moving head, without knowing that it would precede a wide range of LED projectors.
A big surprise awaited us at JTSE with three other models, much more achieved, using the codes of Mac Encore in a power scale as complete as it is consistent. If some people wondered a little while ago about the future of the Danish brand, including the author of these lines, they can now be reassured. Martin is still in the race, both in price slots contained with the Era line, and soon with the release of high-end projectors wearing the Mac flag.
The Era 400, 600 and 800 Performance are mowing heads with full insertion blades in the framing system, called Full-Frame, whose LED powers are 300, 550 and 800 watts respectively. Martin thus always retains his strange historic name “Profile” for spots without blades. 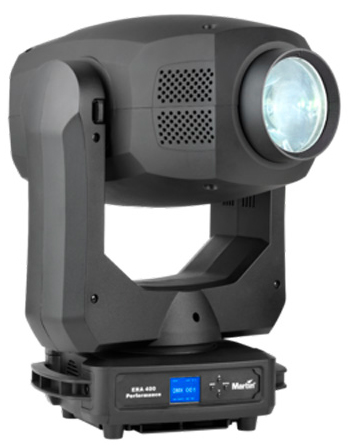 The Era 400 Performance is available in two LED sources, cold and warm.

The Era 400 is available in two types, cold white calibrated at 6500K (the 400 CLD model) and warm white calibrated at 3200K (Era 400 WRM). The daylight version is the more powerful of these two units, with a forecast of 10,000 lumens against 6,000 lumens for the ‘tungsten’ version.
Apart from that, these two compact 22.5 kg machines offer a pleasant working base with a new CMY color mixing system in half-moon shape, a module of 4 blades with 120 ° rotation and a 10 °- 30 ° zoom.
A wheel of 9 colors, 9 static gobos and 7 rotating gobos from the Martin catalog, an iris, a frost and a 3-facet prism complete the Era 400, whose wiser look contrasts with the latest Martin achievements. 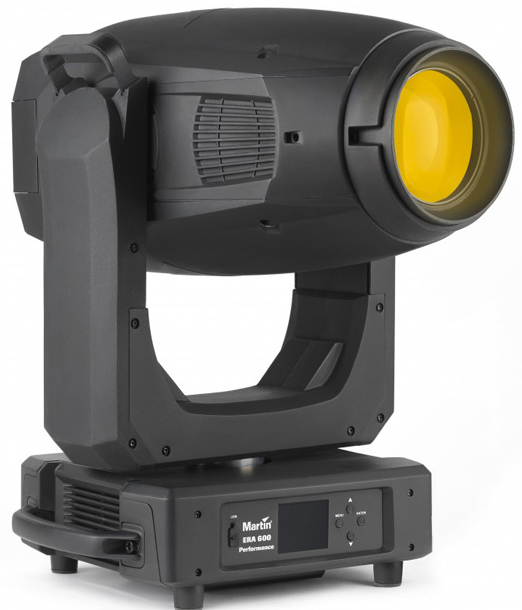 The Era 600 is the most versatile projector of this range.

The Era 600 incorporates the technical specs of the Era 400 CLD, but benefits from a LED source of 550 Watts at 6.500K, for a theoretical flux of 19,000 lumens.
Larger, more powerful, the Era 600 also takes full advantage from a zoom lens that stretches from 6 ° to 45 ° without compromising the homogeneity of its beam.
In addition to the CMY color mixing system, the 9-color wheel is completed with a linear CTO.

The 8 static gobos and the 7 rotating ones match with an animation wheel and 2 prisms, circular 4 facets and linear, as well as an iris and a frost. As with the Era 400, the framing system is particularly neat, with possible crossings between blades. 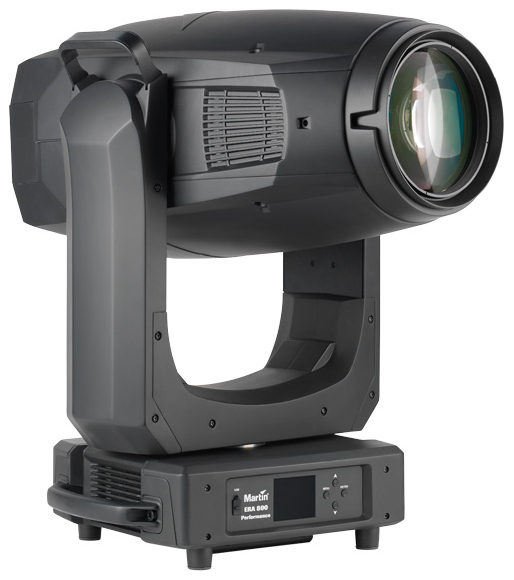 As an Era range flagship, the 800 stands just underneath the 40 kg tag despite its 800 Watts LED source.

If the Era 800 is indeed the most powerful LED moving head designed by Martin, its economical manufacturing allows it to stick to a reasonable price. Around its cool white 6500K module of 34,000 lumens is organized a complete set of effects.

CMY color mixing system, progressive CTO and 6-color wheel all combine with 7 static and 6 rotary gobos, with linear and circular prisms, with 2 frosts, with iris, with animation wheel and with “Full Frame“ framing module.
Its 160 mm lens and its 7 °- 56 ° zoom make it suitable for large spaces where it will ideally express its full potential.

The return of the Martin projectors, certainly in more economically reasonable versions, was one of the good news of this Paris JTSE exhibition. 2019 will remain as a very fruitful year indeed, just like our entertainment industry, boosted by an unexpected dynamic on all fronts, both in Live and in Events as in permanent installations.