The National Theatre of Greece (NTG) staged three acclaimed performances of Aeschylus’s The Persians (first produced in 472 BCE) in July at the ancient Epidaurus open-air amphitheatre, complete with a fully socially distanced audience – of 4,500 instead of the usual 10,000 capacity, who enjoyed the drama and energy of live performance in this classic tragedy. 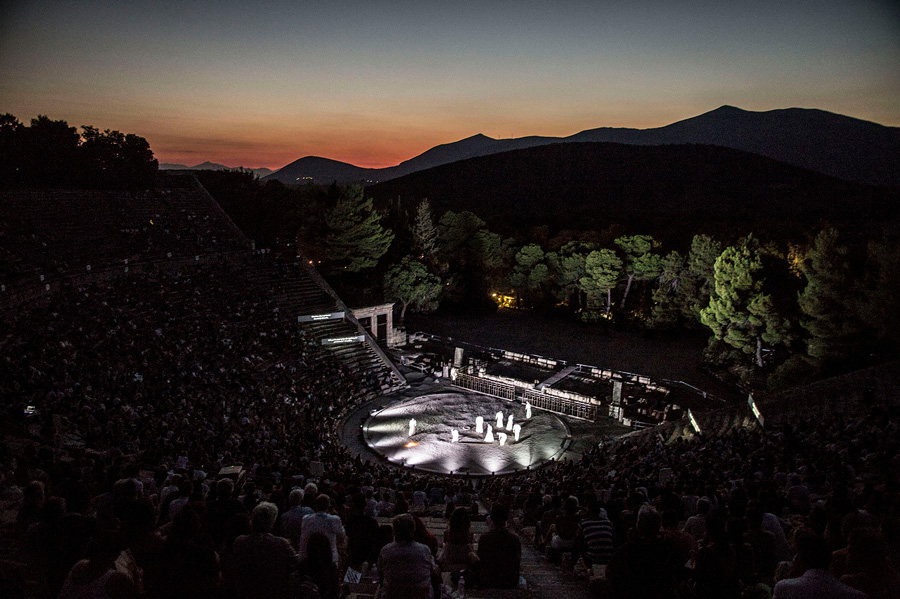 Lighting designer Christina Thanasoula chose Robe LEDBeam 150s to add flexibility and multiple options to her design, placing 10 of the versatile little fixtures in the footlights position around the front of the stage floor.

All three shows, directed by Dimitris Lignadis (artistic director for the NTG), were fully sold out, and the second night’s performance was live-streamed worldwide with support from the Greek Ministry of Culture in partnership with Google Greece as part of the 2020 Athens and Epidaurus Festival. Over 100,000 tuned in to catch the action which was widely applauded by press, critics, and the public. 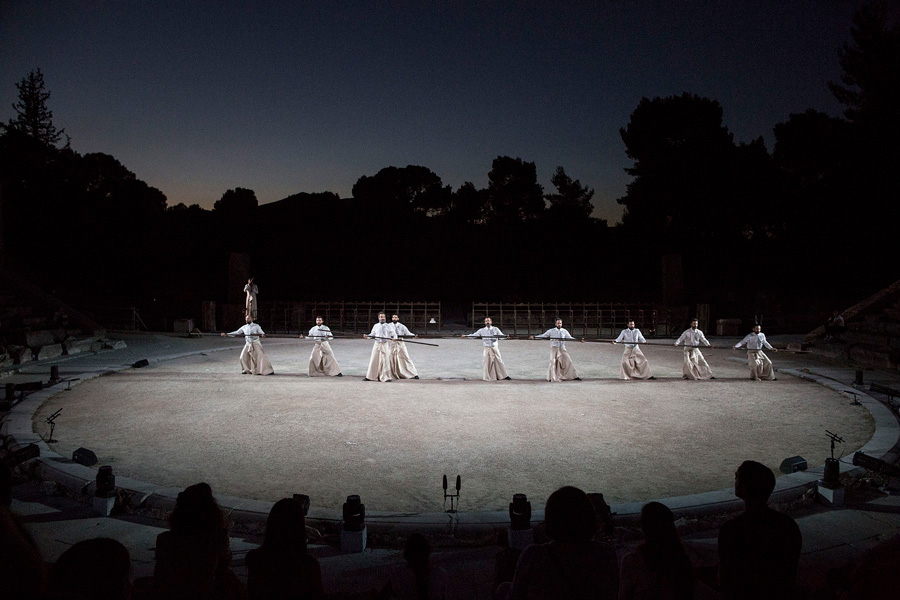 This was the first production by the Greek National Theatre since the initial pandemic lockdown ended and outdoor shows were permitted again in Greece from the 17th of July. They lost no time in sating the public’s appetite for live entertainment, scheduling these landmark performances for the end of the month.
Christina first worked in the Epidaurus venue two years ago, designing lighting for Electra, directed by Thanos Papakonstantinou, also for the National Theatre of Greece, where she used Robe BMFL Wash Beam fixtures. Before then, she has utilised Robe moving lights for numerous event and theatre designs. 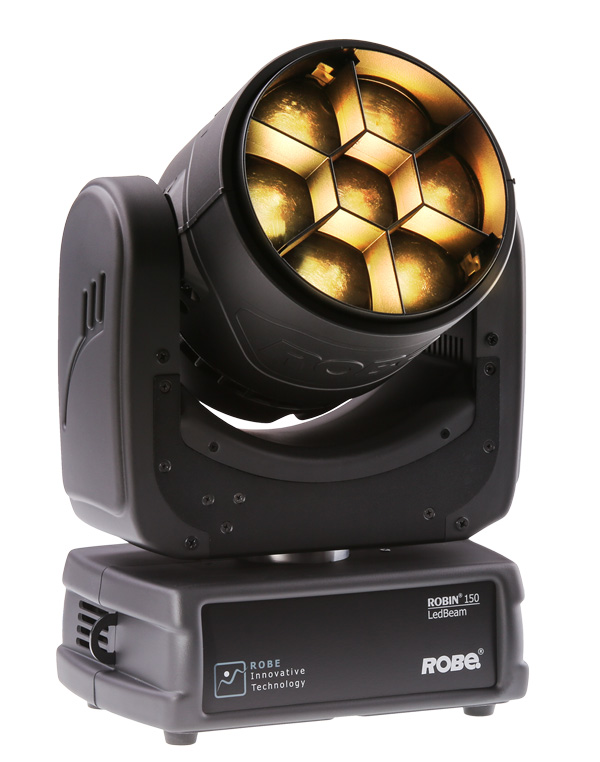 She added the LEDBeam 150s supplied by MSH-Europe because it is a low profile and quiet running fixture with no fan noise, imperative as they were positioned just 2 metres from the first row of the audience.
“Small size and quietness were top of my checklist, I wouldn’t have been able to further consider using these Robe luminaires, without ‘ticking’ these two boxes first,” explained the designer.

She also likes the “excellent dimming” curve which is “a great asset for those extremely slow theatre fades.”
Additionally, “this small fixture offers a great colour palette and some very special tints / shades of white, with an excellent zoom (3.8 – 60 degrees) allowing it to cover many lighting needs from general wash palettes to a tight spot for ‘specials’.” 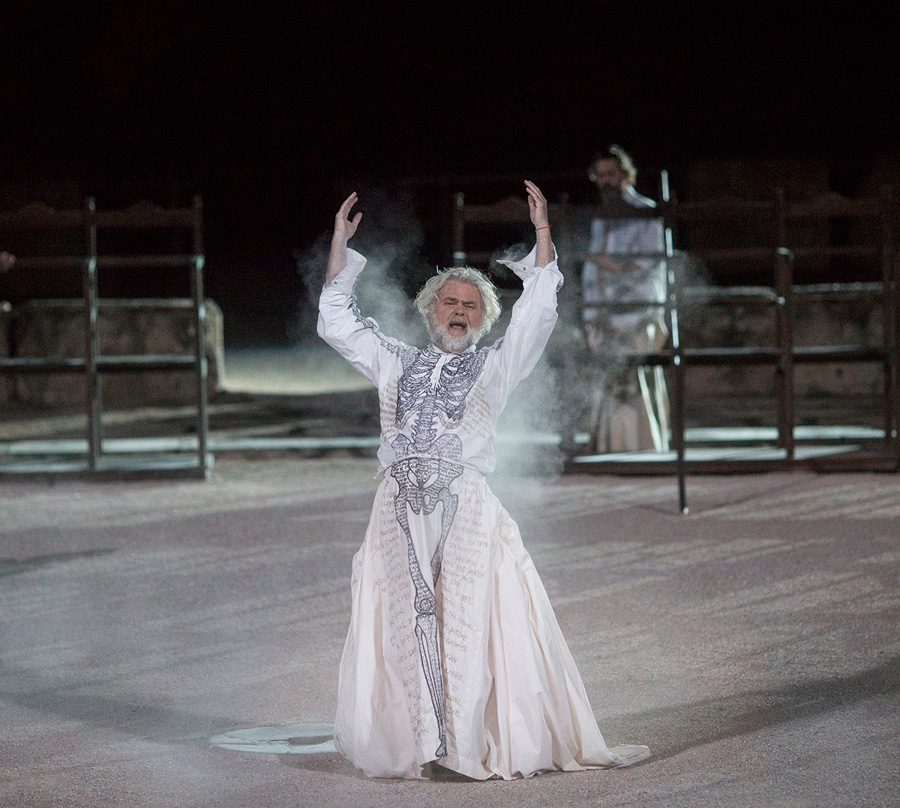 She also considered the simultaneous presence of different lighting sources for the broadcasting cameras carefully. It was a scenario where tungsten, HMI lamps and LED all had to work together harmoniously and create a solid visual on-camera look.

The LEDBeam 150’s colour palette and the high CRI made it straightforward for Christina to match the different colour temperatures and create well-balanced scenes. The creative team’s raw, emotional, and minimalistic scenography integrated fully with the venue’s natural environment.

“We didn’t want to obstruct the wonderful view by adding truss towers or any other huge structures at the back,” explained Christina. The set designed by Alegia Papageorgiou comprised an elegant row of church seating and the absence of other physical set elements onstage demanded “humble” use of lighting fixtures, that would not create any “visual noise”.
In Epidaurus, because of the very steep viewing angle, the floor of the stage is always visible, and it becomes by default an incidental backdrop to the action. So, it had to be neat and clear of any clutter! Lighting for both live and streaming audiences added extra challenges and all the lighting decisions were made with this in mind. Live streaming also made it imperative there were no dark moments whilst live. 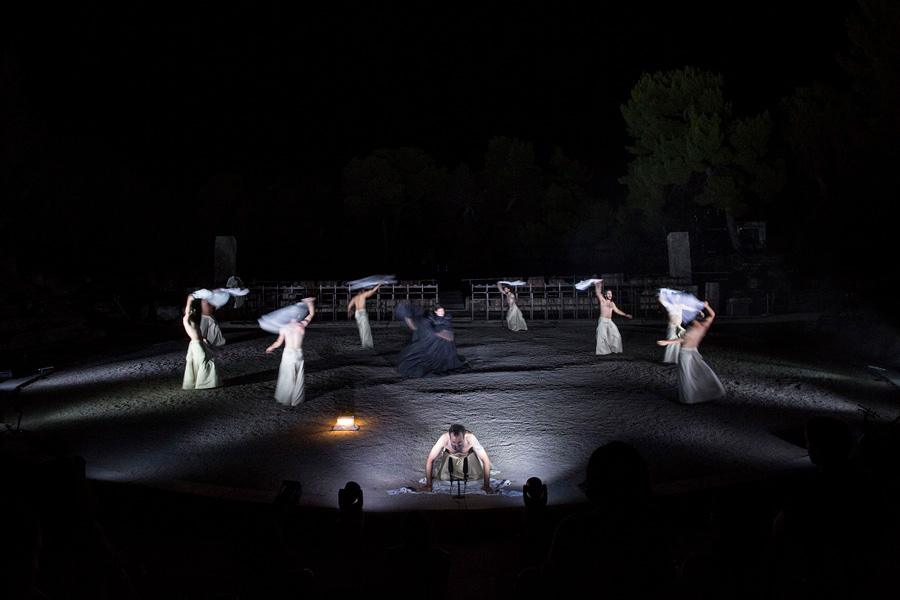 “The LED Beam 150s served dramaturgically as the main lighting fixture for the chorus parts and also were a safety-net for the live cameras in case we needed to raise intensity levels or sneakily illuminate specific areas of the stage that looked slightly underlit on the camera monitors,” underlines Christina, who was delighted with the results.
MSH-Europe is one of the biggest audio-visual equipment providers in Greece.

Christina described the company where her account was handled by Charalambos Economopoulos as “really helpful” in keeping a close eye on their needs and seeing that all the Robe equipment was well prepped and in good condition, including spare units. They also offered 24hour phone support if needed to the National Theatre’s lighting crew.
“Their professional attitude definitely facilitated our work during the long night shifts at Epidaurus,” she adds.

For more info on Robe lighting, check the Robe website

About Christina Thanasoula
Christina is co-founder of Athens, Greece-based design company Creative Lighting (www.creativelighting.gr). She gained a bachelor’s degree in Theatre Studies at university in Greece and then an MA in Advanced Theatre Practice – specializing in Lighting Design – at the Royal Central School of Speech and Drama in London.
Her professional career started in 2003 and since then, Christina has designed lighting for over 250 opera, theatre and site-specific and dance performances staged in venues like the National Theatre of Greece, the Greek National Opera, the Hellenic Festival, the Onassis Cultural Center, the Greek Music Hall, the Michalis Cacoyannis Foundation and many more.
She has also designed lighting for several high-profile international events like the ROTA (Reach out to Asia) Gala Dinner 2014 (nominated for Best Special Event in the Middle East Event Awards 2015); the Qatar National Bank 50th anniversary celebration in 2014 and the RasGas Helium 2 Plant Inauguration ceremony in 2013 (nominated for Best Event Design in the 2014 Middle East Event Awards) and the HAMAD Medical Corporation (HMC)’s Stars of Excellence Awards in 2013 and 2014.