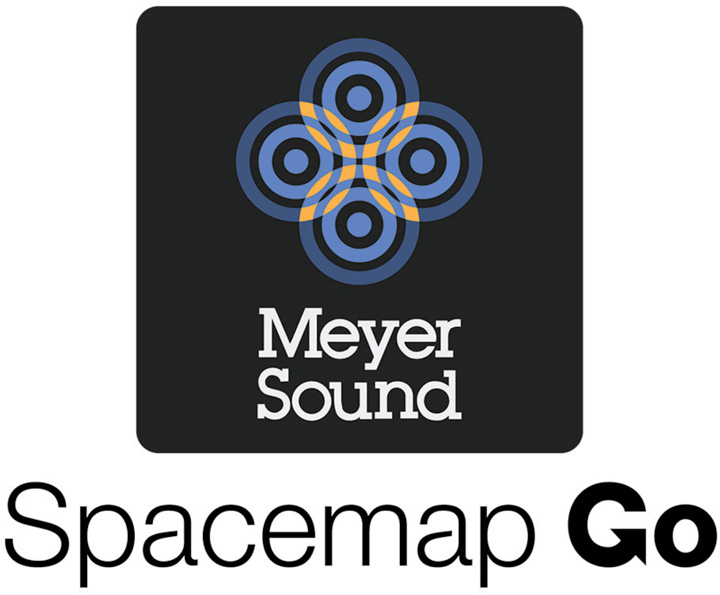 Spacemap Go works with multiple GALAXY processors, and it can be controlled by a single iPad or with multiple iPads to provide a larger and more varied control surface, or to allow simultaneous control by multiple users.

Spacemap Go can be implemented with a free update to GALAXY firmware and Compass control software. Users with existing GALAXY inventory need only supply one or more iPads as appropriate for the application. 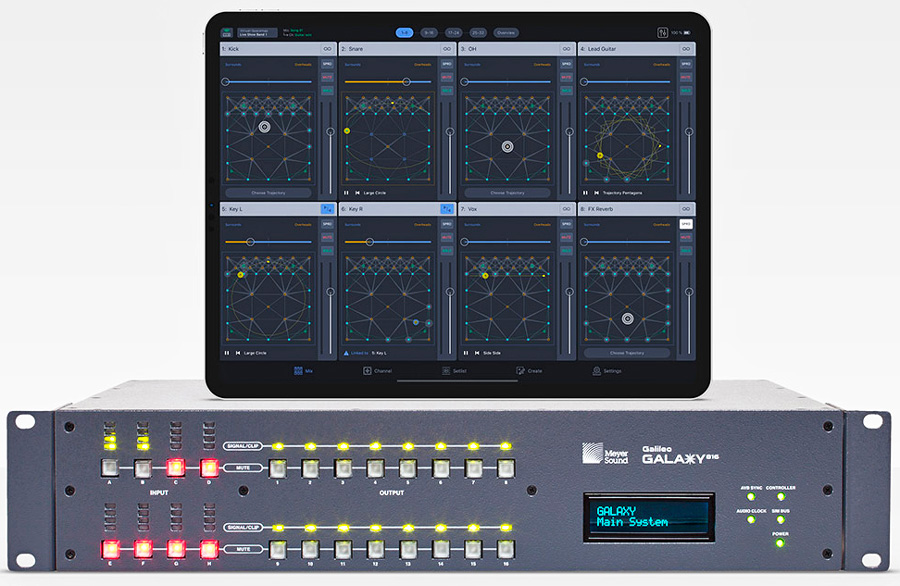 Spacemaps are two-dimensional graphic layouts that enable complex spatial sound distribution with easy-to-use controls.
Trajectories are programmable sound paths applied to Spacemaps to dynamically change the output mix.
Trajectories, which can be recorded, edited, reshaped, and even manipulated while playing, automate the movement of the Spacemap position, creating the illusion of sound movement.
Two basic elements are key to building Spacemaps: nodes and trisets.

Nodes represent loudspeakers (Speaker Nodes), groups of loudspeakers (Virtual Nodes) or silence (Silent Nodes) and are arranged in groups of three as trisets. These trisets provide the fundamental panning elements of the Spacemap and guarantee smooth crossfades. As the channel’s Spacemap position moves closer to a node, more of the signal mixes to that node and less to the other two in the triset.
Multiple adjacent trisets make up a Spacemap, creating customizable spatial contours. Audio from a specified set of Speaker Nodes can be automatically sent to designated outputs using Derived Nodes (for example, to send sound to subwoofers or an under-balcony loudspeaker). Spacemap Go has a two-dimensional interface that supports three-dimensional sound control. Sound can be distributed proportionally between loudspeakers on different physical levels using two Spacemaps for each channel, or by combining overhead loudspeaker locations with lateral or surround speaker locations in a single Spacemap. Spacemap Go guides users through the process of configuring the system inputs, including Milan AVB. Projects contain all the parameters associated with a Spacemap system including the system configuration, as well as all system parameter snapshots.
Control information is organized into a set of views: Mix, Channel, Setlist, Create, and Settings. Additional system controls are available along the top of the screen.

Projects can be saved in the GALAXY processor, to the iPad, or shared via email, AirDrop, or Messages. Spacemaps and trajectories can also be imported into Projects. The Mix view presents an Overview and channel controls for eight channels at a time. The Overview provides the big picture by showing the panning positions of all channels simultaneously. Buttons and swipe gestures at the top of the page simplify navigation.

Each input of a Spacemap System is represented by a channel. The Channel View provides all of the controls for one input channel. The routing of the channel to one or many outputs can be accomplished three different ways:

– The matrix levels associated with the channel can be adjusted directly when precise control is required.
– If one or two Spacemaps are assigned to the channel, a static spatial mix can be made by setting the position within the Spacemap with the touch of a finger and crossfading between the two Spacemaps with a slider.
– Trajectories can be assigned and scaled (changing speed, direction, rotation, size and position) using multi-touch gestures or dedicated controls to create dynamic spatial movement.

If desired, selected channels may be locked out from user control on the iPad. The Setlist view is used to store and recall Mix and Channel Snapshots. Mix Snapshots save the entire spatial mix for all channels and may be used to store the mix for a song, a band, or a scene in a play.
Channel Snapshots are contained within Mix Snaphots and allow changes within sections of a performance, such as a guitar solo or an individual sound effect.

The channel mix is stored automatically as either a set of matrix levels, a static position within a Spacemap, or a trajectory moving within a Spacemap. Smooth crossfades between channel mixes of any type provide ease of use for nuanced spatial orchestration. The Create view is used to create, edit, and test Spacemaps and trajectories. Example Spacemaps include common surround layouts as well as grids and lines of loudspeakers. Spacemaps and trajectories can also be created from the ground up. Nodes are added and linked with simple touch gestures, and trisets may be created manually or automatically.
Trajectories may be recorded by touching discrete points or moving continuously; the precise timing of segments within the trajectory may be edited and scaled after the recording is complete. Two-finger pinch and open gestures allow scaling of views.

Spacemap Go offers seamless compatibility with popular sound design and show control programs such as QLab. For example, a complex sound design can be assembled using QLab in the studio, perhaps initially combining all multichannel cues into a stereo rough mix for reference. When on site, the tracks can be quickly expanded into a multi-channel spatial mix using Spacemap Go’s templates for common multi-channel configurations. 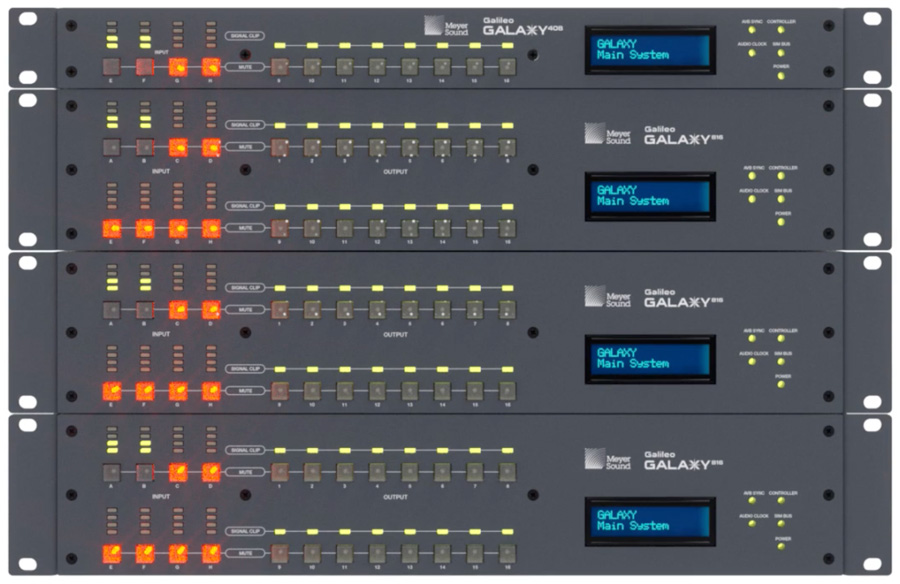 Systems are quickly and easily configured by Spacemap Go using any combination of GALAXY 408 or GALAXY 816 using Milan AVB, AES3 or analog as inputs and outputs.
Spacemap Systems can be configured for up to 32 inputs and as many outputs as are provided by the processors.

Each GALAXY provides up to 232 matrix crosspoints. Multiple iPads may be used to control a system, providing immediate access to additional channels or allowing simultaneous access to different screen views. 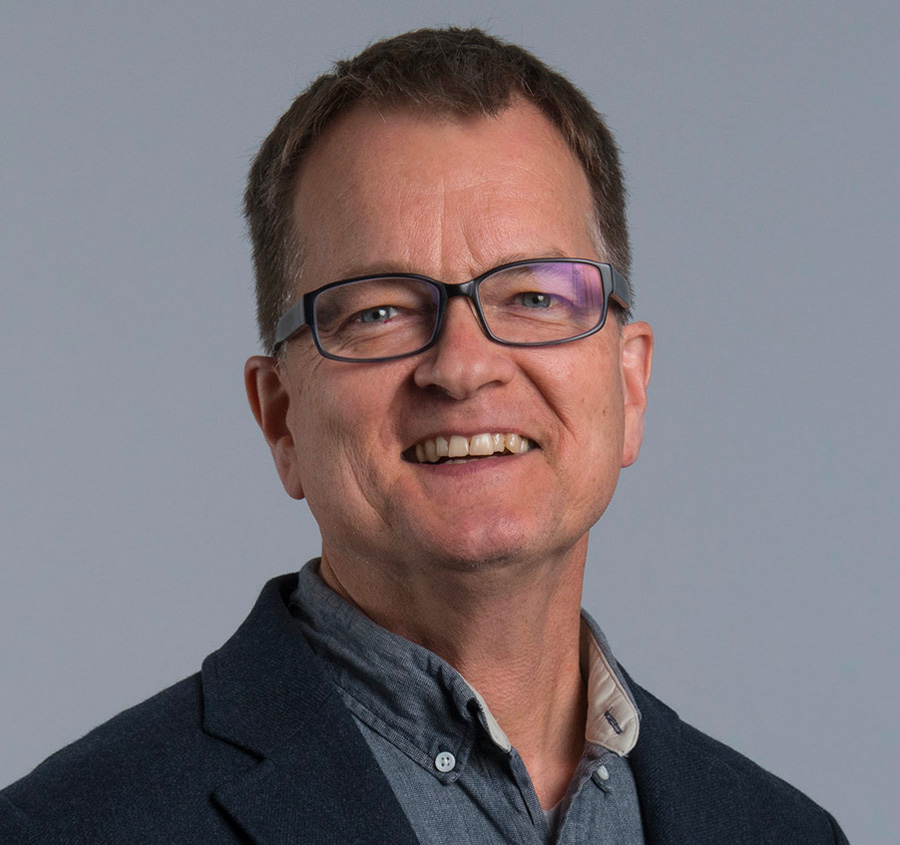 « Every GALAXY processor incorporates a powerful digital summing matrix, which serves an important function in system optimization. » explains Steve Ellison, Meyer Sound Director, Spatial Sound. « With Spacemap Go, we have added a new creative layer over that technical layer.
All the optimization tools are still there, but now GALAXY does double duty as a powerful spatial sound mixer that can be intuitively operated in real time, programmed to follow automated cues or recall internal snapshots with smooth transitions and dynamic movement.
In terms of accessibility, scalability and intuitive ease of use, Spacemap Go is a breakthrough for sound designers and sound artists. »

– Register for the 9 AM PST sessions here

– And the 5 PM PST sessions here