The Phoenix Suns Arena had multiple names since it first opened in June of 1992, but the Phoenix Suns Arena formerly America West Arena, US Airways Center, Talking Stick Resort Arena, and PHX Arena has been the home of the NBA Phoenix Suns since day one.
What has changed recently is how the venue sounds, with a new L-Acoustics Kara II loudspeaker system in place just in time for the 2021 NBA season. 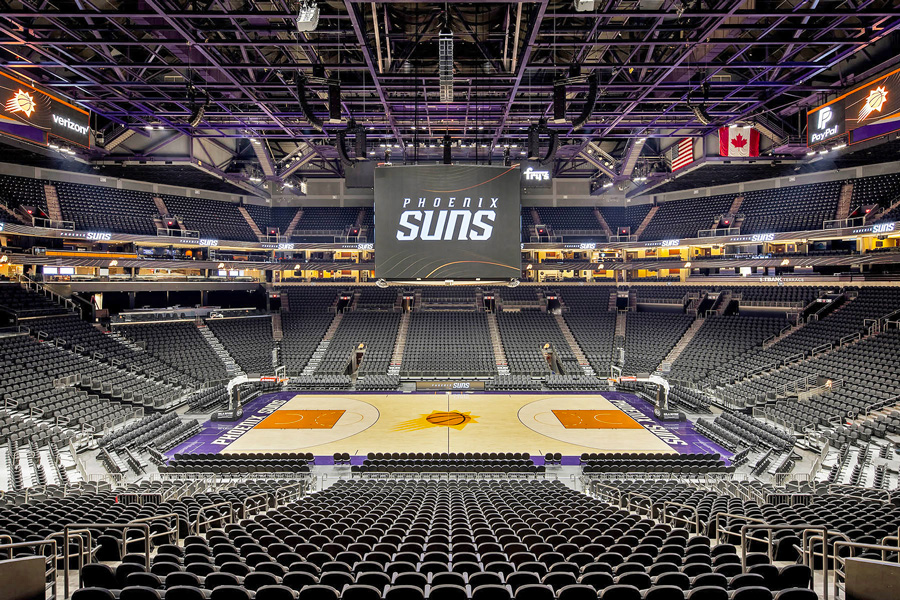 Designed by AV consultants at WJHW and installed by Pro Sound & Video, a Solotech company, the new Kara II system is part of the $230 million Project 201: PHX Reimagined, designed to convert the nearly 30-year-old arena into a state-of-the-art sports entertainment venue for Phoenix Suns and WNBA Phoenix Mercury fans.

According to Pro Sound & Video, the arena’s management specifically requested an L-Acoustics PA system as part of the ongoing and extensive venue renovation, including new distributed sound systems for the arena’s concourses and back-of-house areas.
“The venue’s management has had positive experiences with L-Acoustics in other locations in the past, and the brand has become widely accepted by NBA arenas,” says Pro Sound. 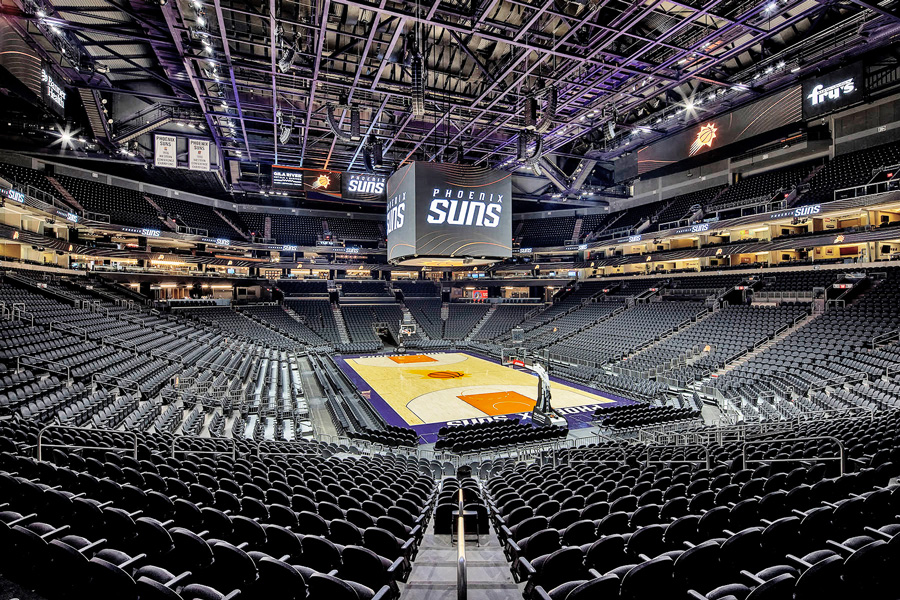 The integrator points out that Kara II was chosen for its light weight and powerful output capability. “We had to stay within certain weight limits on the steel for this project, especially since the system is designed to be pulled up and out of the way, potentially, when touring shows come through with their own sound systems,” they explain. “We worked very closely with the structural engineers to make sure we were well within the weight limits. 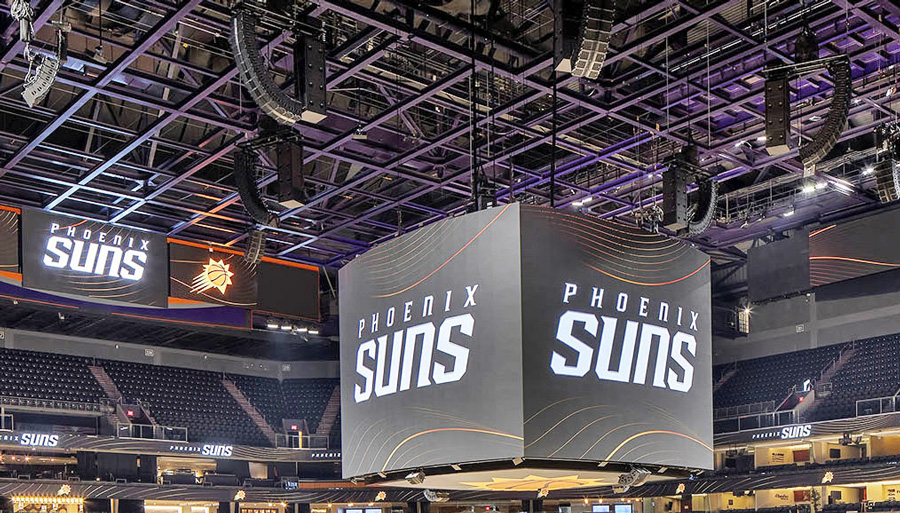 At the same time, this is a large venue ”Phoenix Suns Arena has a seating capacity of over 18,000“ and the sound needs to cover the entire seating area and court.
Kara II is not only compact and lightweight, but it also has a lot of power for its size. And it offers a lot of sonic transparency as well.”

With the number of fans in attendance still being strictly limited per current safety protocols, acoustical reflection and reverberation issues from empty seating areas are a potential concern. “Thankfully, Kara II has a tight dispersion directivity and high degree of speech intelligibility,” Pro Sound adds. “Those have become more and more important in sports venue sound designs and are reasons why L-Acoustics is seen in more arenas and stadiums.” 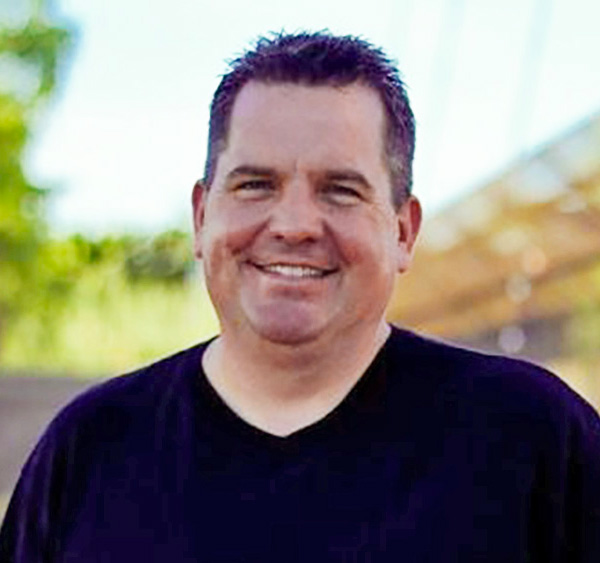 Phoenix Suns Director of Engineering & A/V Technology Gary Gillespie agrees, citing hearing L-Acoustics systems installed at the NFL Arizona Cardinals State Farm Stadium and NHL Arizona Coyotes Gila River Arena in nearby Glendale. “I’m also a live-sound mixer, so I’ve had a lot of experience with L-Acoustics, and I’m a fan of their sound,” he says.
“But our team leadership also highly values the intelligibility that Kara II brings to speech in the arena and the fact that L-Acoustics WST systems never cause ear fatigue for the fans. It’s just a great-sounding system.”

The arena’s new system comprises six arrays of 14 Kara II enclosures for a total of 84 Kara II, plus a hang of four SB18i subwoofers flown in a cardioid configuration directly behind each Kara II array. In addition, there are 28 short-throw X12 coaxials deployed as a delay ring. All of these are powered by 43 LA4X amplified controllers—36 for the main PA and seven for the delays—providing over 170 channels of amplification. 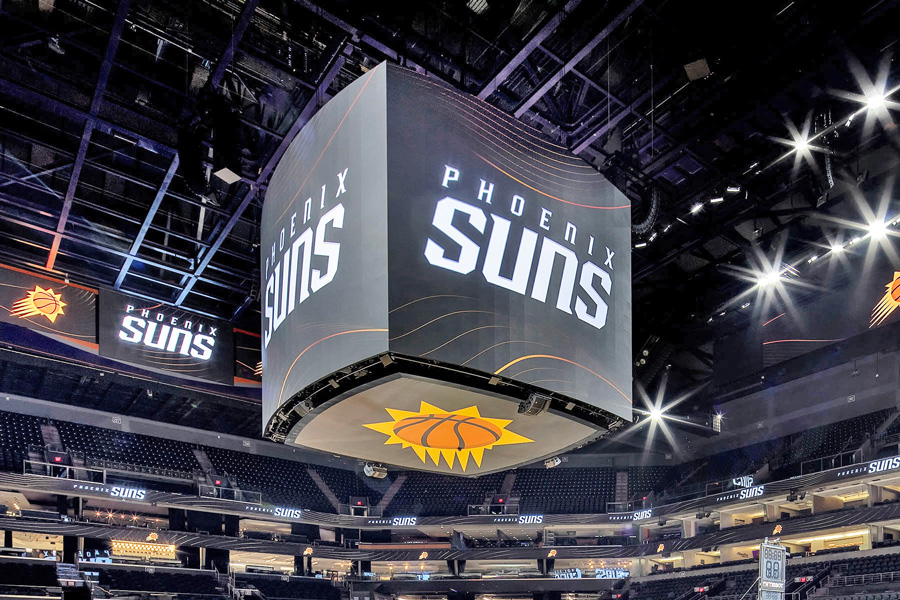 The design of the Phoenix Suns’ new sound system originally called for eight hangs of Kara. However, this was changed to accommodate revised weight-load requirements for touring systems. With last year’s addition of Panflex to the original Kara loudspeaker model, providing four-in-one directivity, Kara II was a “game-changer” for the Suns.

Now, one box could cover any audience geometry and offer consistent coverage and SPL distribution with precise focus in four different directivity patterns: 70 degrees or 110 degrees symmetrical and 90 degrees asymmetrical, focusing directivity to either the left or right. In its 70-degree configuration, Kara II packs a full 2 dB more than in 110 degrees. That prompted design changes that allowed just six arrays to fulfill the coverage requirements of the bowl without having to alter the product specification from Kara II. 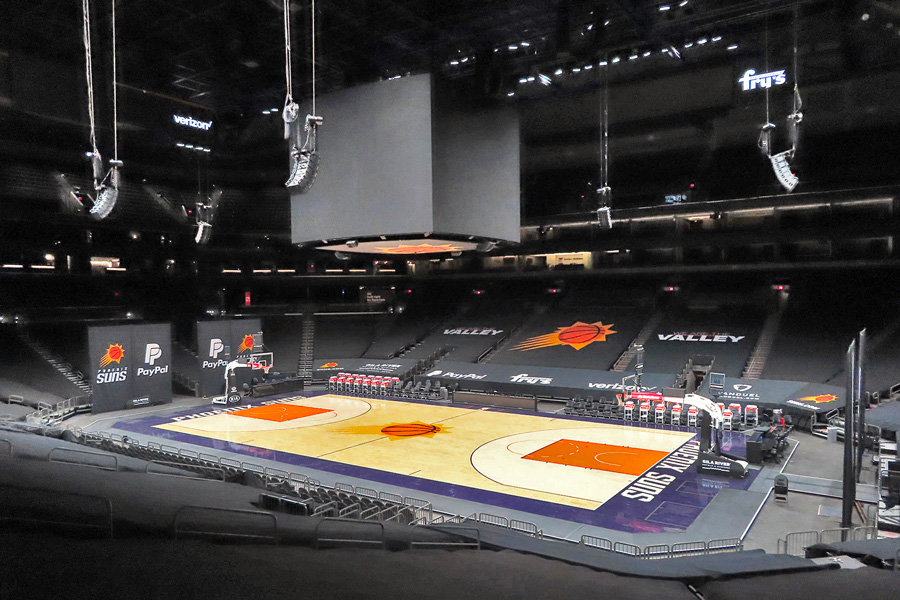 L-Acoustics Soundvision 3D modeling software was used to execute the system design and all revisions quickly and accurately. This particular revision provided the venue with 28 additional Kara II from the original order that Gillespie and the Phoenix Suns management team decided would serve as onsite production inventory and be used as a flexible multi-use, in-house special-events production audio system.

Anyone in arena management knows to “expect the unexpected.” As fate would have it, those extra Kara II enclosures came in very handy almost immediately after the NBA directed their teams to implement their own enhanced crowd-noise systems for the current season. The additional inventory, plus eight more enclosures rented from the local shop of Clearwing Productions, now make up six hangs of six Kara II and are dedicated to the virtual crowd-noise system developed by Firehouse Productions for the NBA’s Orlando “bubble” last season, now in place at most NBA venues.

“Kara II’s Panflex update provided us with the extra speakers we needed for the crowd-noise system at exactly the right time,” he says.

“We began to see ROI right away on what we had thought would be extra inventory, and it turned a frown upside-down. And with up to 3,000 fans allowed inside now, the system truly makes it sound like a full house. L-Acoustics, Pro Sound & Video, and WJHW really partnered with us to create a greatly enhanced experience for both the fans and the players.”