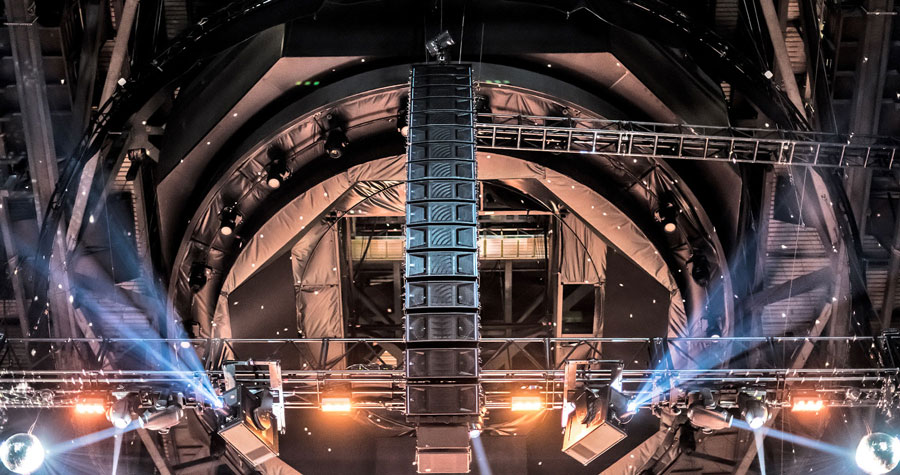 Michael Bublé’s ongoing “Higher Tour” could best be described as an intimate party on a grand scale. It’s a full-tilt production in every respect, replete with a massive four-tier stage set to accommodate a full orchestra and backup singers – augmented on occasion by strings and a 10-piece choir – plus extensive lighting effects and four giant video screens. 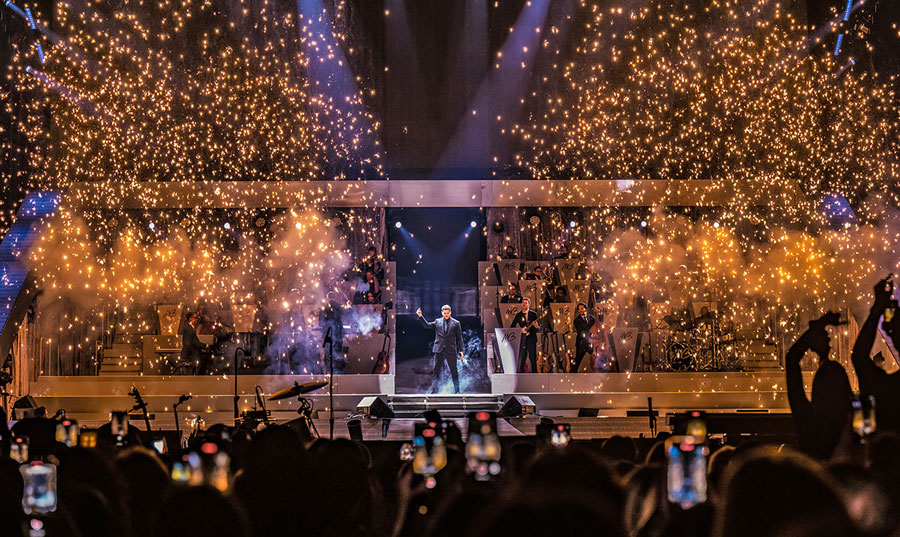 For audio support, Bublé is again carrying a “dual hybrid” Meyer Sound reinforcement system, comprising both main stage arrays plus massive center-hung arrays which function as an over-specified delay system when Bublé is on the main stage and as an in-the-round system when he occupies the B-stage. This time, however, the tour has slimmed down its audio footprint by replacing most former LEO® Family and all M Series™ systems with 76 new PANTHER large-format linear line array loudspeakers.

“We are thrilled with the new PANTHER systems, not just sonically – we expect the best from Meyer in that regard – but also because these are much lighter and smaller boxes,” says Craig Finley, the tour’s veteran production manager. “No two‑ton motors out here! And PANTHER packs very efficiently. We are essentially carrying two systems yet it all fits in one truck. And the power requirements are lower as well.” 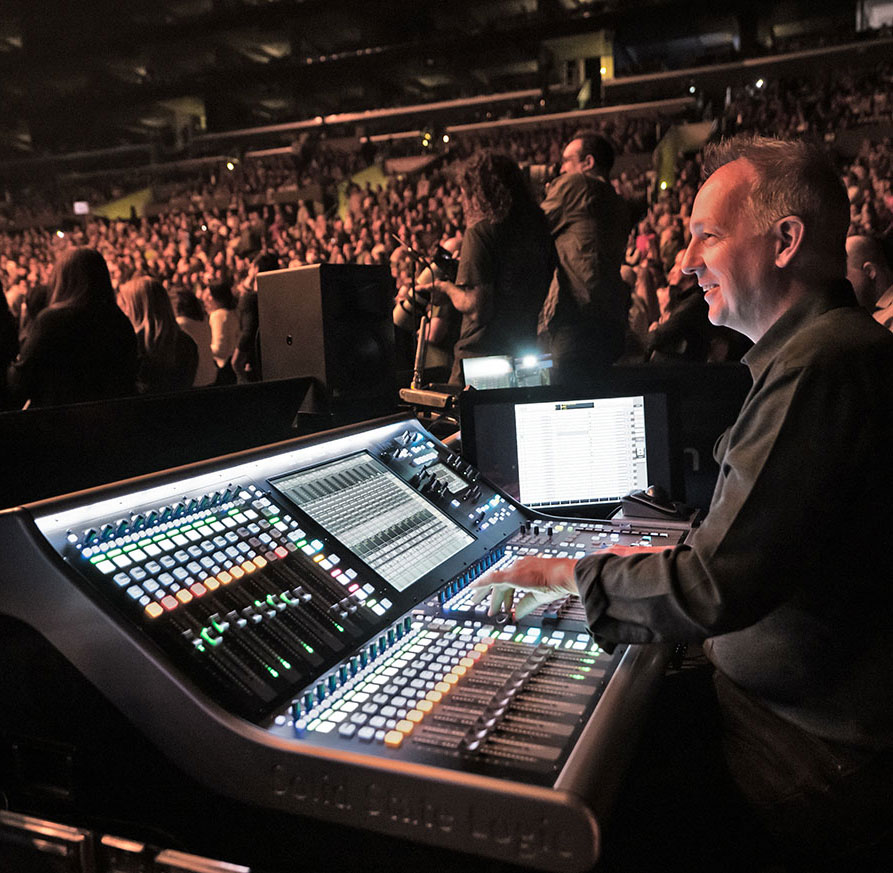 Craig Doubet facing his SSL Live and a pair of Amie studio monitors.

Bublé’s long-time FOH engineer, Craig Doubet, notes that the advantages extend to load-in/out time. “PANTHER goes up and down very fast,” he says. “We have 13 arrays in the air, and we now can get them all down and ready to roll out in 75 minutes.”

The logistical benefits from a slimmed-down system have not come with a performance penalty, but rather the opposite, claims Doubet. “It’s a different box to mix on, and it took a while to get my ears around it,” he says.

“But in the end, it’s right up my alley. It’s very detailed, and the dynamics are almost effortless. Michael wanted a louder show, with more of a party atmosphere, and these speakers definitely do it. We are all pleased by the vocal sound, which is just amazing. It sounds just like Michael everywhere.” 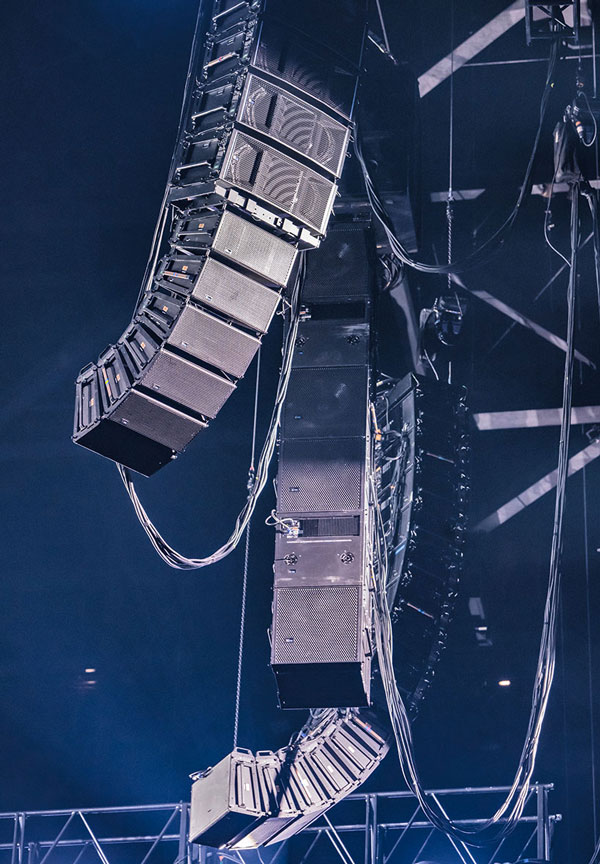 A detail from the B-Stage. Two “short arrays” of eight PANTHER and six LEOPARD completed in the lows by six 900-LFC subs.

The 48 PANTHER loudspeakers over the B-stage are flown as one array of 16 plus four arrays of eight each, with two LEOPARD loudspeakers under the long array and six each under the shorter arrays. Here, a total of 14 900-LFC elements, flown and ground stacked, drive the deep bass, and eight ULTRA-X40 loudspeakers contribute front fill.

Elsewhere, 16 MJF-210™ stage monitors provide foldback while a pair of Amie® precision studio monitors paired with an Amie®-Sub reside at FOH. Continuing a long-standing relationship, Solotech was again selected as the provider of the Meyer Sound systems as well as all other audio and video production elements. As on his prior “Evening with…” tour, Bublé takes a leisurely singing stroll to the B‑stage, with his voice in space tracked along the way using Meyer Sound’s Spacemap Go spatial sound design and mixing tool.
“This time, having the same PANTHER systems at both the main stage and the B-stage keeps the sound of Michael’s voice uniform in tonality as he gradually moves between the stages,” says Doubet. “It also makes it easier to match the arrays when tuning the system.” Rounding out the key audio crew for the tour are systems engineer Fred Cantin and monitor engineers Martin Paré and Renato Petruzziello.

Michael Bublé’s “Higher Tour” opened on August 8, with 38 shows scheduled in North America. The tour continues with 34 more shows in Oceania, South America, Europe, and the United Kingdom, with shows scheduled through May 17, 2023.