After celebrating 15 years lighting My Morning Jacket (MMJ) – including seven design cycles – any LD could be forgiven for running out of fresh ideas.
But not Marc Janowitz, who recently started using GLP’s innovative KNV Dots – the latest in a long history of discovering solutions within the German company’s fast-evolving LED inventory. “In 2012 I first started stringing [impression] X4 as ‘festoons’ on MMJ and I just kept on using them as a problem-solving tool,” he explains. “Prior to that I had been using the 120 Zoom. The X4, with its homogeneous RGBW sources, was a big sea change for LED wash fixtures.”

Presently Janowitz is favouring the KNV Dot, which he also has out with the Black Pumas. One of four inter-operable KNV fixtures, each housing can be used independently, or combined seamlessly to provide massive canvasses.
Contained in its own IP54-rated housing, KNV Dot comprises a bright 30W hyper-white central LED surrounded by 16 x 0.5W RGB LEDs, providing the flexibility to be used as a pixel-mapped surface, strobe, blinder or washlight, and with a DMX pattern generator offering further multiple effect libraries and graphic options. 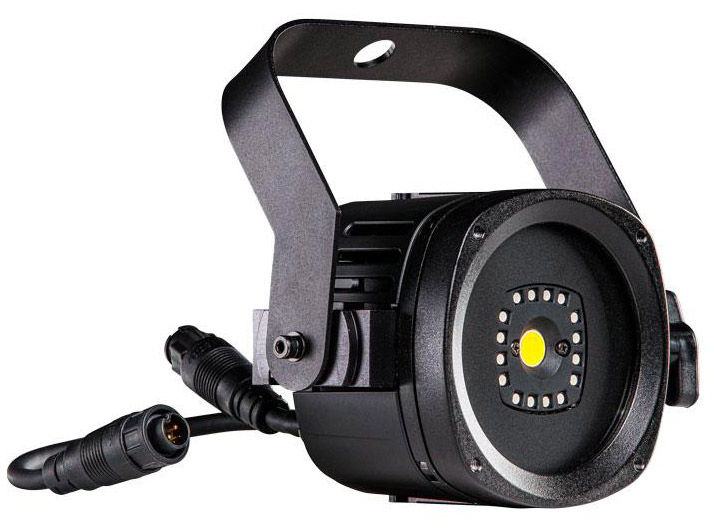 The KNV Dots form an essential part of an evolved design, which also includes multiples of GLP JDC1 hybrid strobes, X4 Bar 20 battens, X4 washes and the tiny impression X4 S.
After COVID the band resumed touring, announcing Fall dates which would showcase not only their recently released Waterfall II album but also a new self-titled album released mid-tour in October, all of which needed to be expanded into the show.

The scalable production design was initially aimed at 10,000–12,000-capacity ‘shed’-style venues at the upper size and 3,000 4,000 boutique size at the lower. It would range from 40ft to the highest truss – to accommodate six diamond centrepieces, each edged with six GLP impression X4 Bar 20 battens – down to 25ft.
Initially the design had come together for limited engagements in 2019 to celebrate the band’s 20th anniversary. “We always knew we would use the design again but then everything was put on ice (with lockdown),” states the LD. “The diamond layout was modular and each diamond was isolated from the next. This modularity left a lot of negative space between each and I really wanted something to fill in those gaps, so we used 120 of the KNV Dot. One of the really amazing and appealing features is in the name: You can dot them anywhere and simply click them into the space.

“Whereas diamonds are geometric and symmetric, I wanted to fill that negative space in a much more organic way, more like a twinkling starfield – it was a firmament that needed to be filled. “Because the outer RGB ring is never hard to look at, they can twinkle away as background elements throughout the show. Then you can push right through with the white LED in the middle and grow it to what you want – from a twinkly star to a supernova and audience blinder. In fact when you hit the white it’s competing with a JDC1; they work great together.”

Janowitz has a set of 14 JDC1 in the rig – one in the centre of each diamond, a set on the floor upstage of the band and another midstage. “The JDCs either work with the Dots or counter to them. If I do rhythmic hits, I’ll alternate between. You can get a nice large outside effect – a colour starfield, like an aurora borealis effect,” he continues.

He says the band picked up on it right away. “They absolutely love it,” he adds. “They first saw them in rehearsals and were amazed at these crazy spokes getting the lights to float in outer space like a Milky Way.

“The Dots spoke out from the diamonds on 2ft, 3ft, 4ft extension arms: their placement was originally selected at random. I asked my design assistant, Jacob Wesson to zoom in on the front elevation, close his eyes and start clicking Dot fixtures into the model.
Then, in the lighting shop, he essentially did the same but with the actual units. There are also a bunch of them on mic stands behind the band at random heights; in fact there are clusters everywhere.” For the smallest venues, when the diamonds can’t be rigged, the arms are re-located to the three upstage floor package carts.

In summary, Marc Janowitz says: “I am always drawn to GLP products that you can dangle or outrig in a whimsical way – the KNV Dot provides consistent eye candy in every look.”
The lighting package is supplied by Pulse Lighting with additional Dot fixtures from Gateway Productions.