Masked Singer – TV singing competition with celebrities concealed in fantastic elaborate costumes and full face masks, in this case depicting the Wolf, the Dragonfly the Queen and several others to keep their identities secret whilst performing cover versions – hits Belgium for the first time this autumn!
Presented by Niels Destadsbader and recorded at NEP Studio in Londerzeel, a judging panel and the audience are drip-fed with clues as to their real identity … which is revealed when one is voted off at the end of each episode.

Lighting for the show, broadcast on VTM, is designed by Michiel Milbou and includes 150 Robe moving lights, a skilful combination of 58 x Tetra2 and 56 x CycFX 8 moving LED Bars and 36 x LEDBeam 150s. The 400 or so lights in total involved including video and light-panels – are supplied to the production by rental company Splendit. Michiel was asked onboard by executive producer Olivier Deprez, who together with director Maryse van den Wyngaert and set designer Koen Verbrugghe make up a dynamic creative team who have worked on several previous eye-popping TV productions.
The four collaborated to produce the slick production aesthetic characterising the Belgian show. The only Masked Singer style-book request for the stage design was that there must be two masks as entrances – left and right – for singers to enter / exit.

The set design evolved into the clean and minimalist look with the entrances as two giant masks clad in a neutral white surface so they could be fashioned and transformed by mapped video projections, with a moving LED screen in between them and two more moving video screens outside of each mask. In front of these is a black gloss stage with the front-facing sections clad in LED, and downstage of that, two 90-degree orientated planes of video floor making up a front runway section.

Michiel wanted a vertical lighting look to define the set and stage, and that’s why he specified the Tetra2s and the CycFX 8s.

The Tetra2s were rigged upstage vertically orientated to produce lines and slices of light that could scan and sweep around, while the CycFX8s were used to outline the stage and the edges of the catwalk. The two linear lightsources complemented one another perfectly. 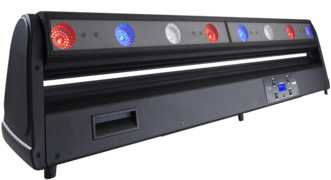 He has used CycFX 8s many times before, but this was the first time with the Tetra2s … with which he was delighted.
The show is all about “BIG entrances and building the appropriate atmosphere for each costumed character, as well as relating to the song they are singing, so there are multiple facets influencing each set of lighting cues,” explained Michiel, adding that this is also why the team chose to have multiple video elements in the set, to assist with these big, bold dramatic changes.

The scenic masks of the entrances were mapped and part of the overall visual treatment. “The process was something far more sophisticated than just lighting a singer on stage as the costume disguise was all part of the intrigue and that gave the ‘character building’ process a third dimension which had to be reflected with lighting and video,” commented Michiel. Positioning lights was also critical. With so much video onstage, while it had to be a harmonious relationship, Michiel wanted lighting to be separate in a bid to ensure that the two fundamental light sources didn’t become an indistinct mush.

To this end, he loves the fact that the Tetra2 bars can be zoomed in to little pinpoints or zoomed out to wash much wider areas, and this contrast became a feature of the show. “It’s extremely bright for this type of fixture and I enjoyed discovering just how effective they can be.” For shows like this, live audience reactions are usually an essential part of the atmosphere and vibe, however, due to Coronavirus restrictions, the recording sessions had only a very limited real audience. 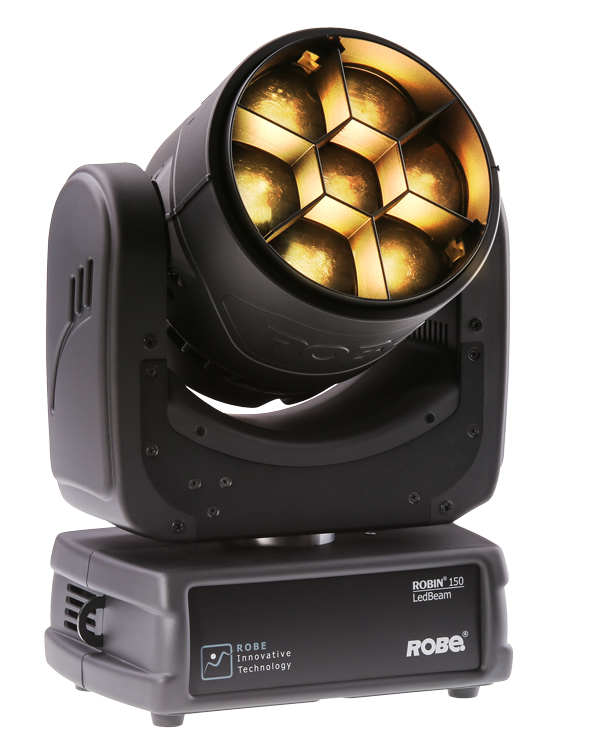 A front row of seats immediately on the other side of the catwalk around the stage was allocated for guests, which were cleverly lit with LEDBeam 150s, some on the floor and some in the roof, to give the impression of many more people being present!
A virtual audience appeared via Zoom and with their own floor manager for voting and applause cues on screens in front of the stage so contestants could at least see some more faces, and smart lighting, camerawork and editing combined to ensure that the studio space never looked a flat empty void! It was a great piece of ‘visual magic’!
Two grandMA consoles networked were used for running the lighting and the playback video, operated by Cédric Eestermans (lighting) and Niels Huybrechts (video).

In addition to ‘recreating’ the audience, many other changes to the usual production scheduling and infrastructure were triggered by the pandemic, and numerous new rules and regulations had to be followed so everything remained safe and Covid-compliant. Michiel and everyone involved was simply ecstatic to be back working after the enforced break when the pandemic all but shut down the industry including this production in March.

He was also especially pleased that this is a fresh new show for Belgium. “There are always so many expectations with a new production, and while that adds to the pressure, it also makes it all the more exciting and edgy. We have all pushed ourselves even harder than we always do to deliver something very special,” he concluded.
He feels that while it’s clearly some time before any sort of pre-Covid normality returns, there are signs that TV productions are getting going again, fuelled by the need to produce new content and the practical ability to keep these types of environments safe and controlled.

For more product and general info, check the Robe website