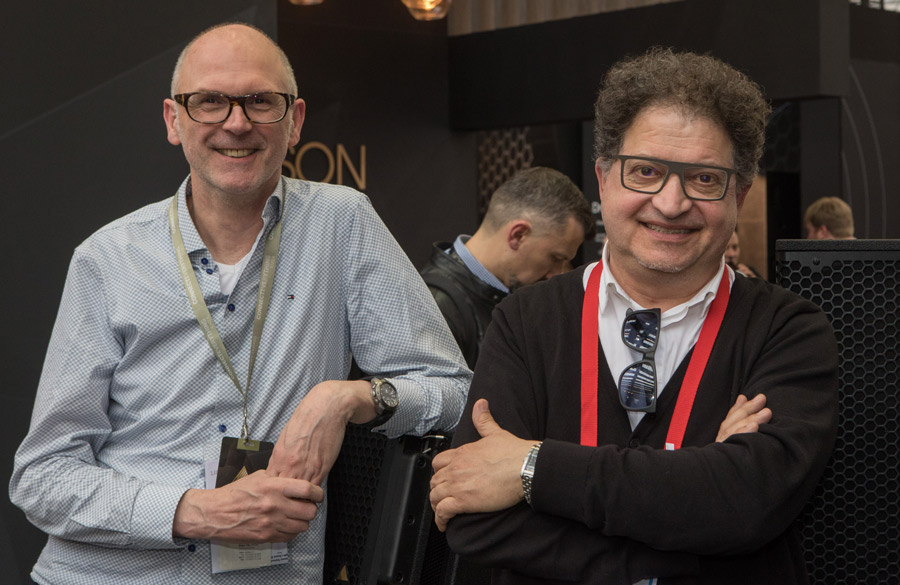 Didier Dal Fitto and Guy Vignet on the Adamson booth.

When we do not see anything coming, it does not mean that no work’s done, just that the secrets are well kept. Adamson opens the floodgates of new stuff at PL + S 2019, with quite a lot of new models. Finally it’s also movin’ and dancin’ in the pro audio sector, and not only in lighting!

And, habit more than claimed and generating good news, we were once again meeting Didier Dal Fitto and Guy Vignet (in alphabetical order), not only French distributors (DV2) but deeply involved in the brand strategy since years. A true SLU Press Call, and always so interesting!

SLU : Things they are a-changin’ for smaller models, amplified or not, as well as for the Point Source units…

Didier Dal Fitto (DV2 Associate Director, and a Monster of Pro Audio Technology): The S7 is not officially available. We have it as a testing unit at DV2 since september 2018, and this model came close after the installation version IS7 (that we listened to, and much appreciated, click on link here).

Adamson is also beginning to unveil self-amplified products, a technology which they’ve been working on since some years now, giving them the suffix CS, with C for Connected.
To try and understand all the acronyms, the S is for Touring, the IS is for Installation, and the CS is self-amplified. We already know the CS7P, a Point Source model, its much bigger brother the CS10P will be there soon and will lead the way to mutating the whole S Series into CS in the forthcoming months. 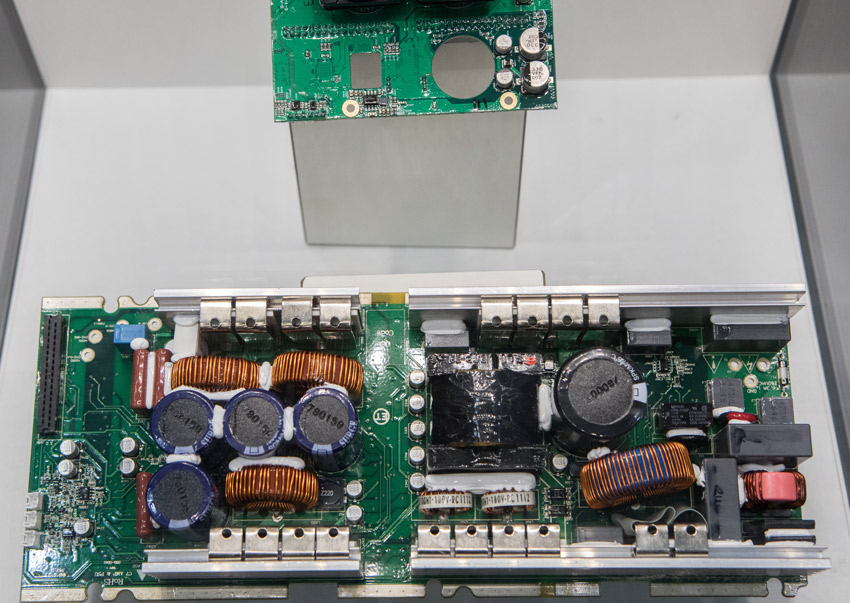 The future of Adamson seen in the form of the CS7P’s amplifier module, as shown lately at ISE 2019 in Amsterdam.

SLU : Do we have an idea of these models?

SLU : Will there a 7 Narrow? Do people really need it out there?

Didier Dal Fitto : No, there’s no need whatsoever for this small box in long throw mode.

SLU : Adamson will then launch the networked line-array… some say they’re not very self-confident to power sync a whole line…

Didier Dal Fitto : This is not true. It is a fact that, thanks to Lab.gruppen and Dante, we’ve been able to understand pretty well over the past years the network audio transmission. To say it simply enough, the data are always transferred thru switches, and each box has one for input and one for output.
All this lead to latency piling up, and possibly differently for one side to the other, but in a totally digital network, each sample travels along with its reproduction address, so there will never be an offset. The true essence of this data transmission is to take into account these phenomena. 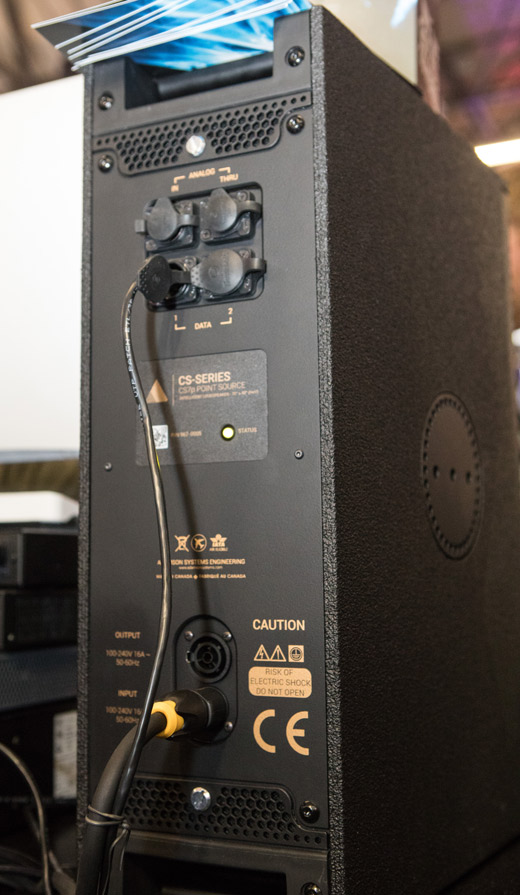 The easiest possible link, one network input and one mains input. You just address the flow, and there you go.

SLU : Will Adamson specify a given number of boxes per cable?

Didier Dal Fitto : Yes, and as we always work by quantities of 4, our speakers are coupled by 4 on one cable, we have trolleys of 4, we’ll keep the logistics very down-to-earth and we’ll specify one data link for 4 speakers in a row, that will also give more redundancy and safety. Only one cable might prove more risky.

SLU : Is there an analog input on the CS7P?

Didier Dal Fitto : Of course, we have analog in/out, and network 1 and 2. There are 4 encapsulated chassis plugs, plus deux mains sockets. This said, there’s a very simple way to make a digital network safe, you plug into the first box with a cable, you daisy-chain the following 3 units, and you come back from the 4th one with another cable back to your switch. Wherever a cut-off might occur, all the boxes will always get the digital feed.
Another Adamson safety feature: in a network AVB-type plug, the redundancy is there already. In 100 Mbit/s people use only 4 wires out of the 8 available, so you can double up the data signal going up into the boxes.

Didier Dal Fitto : Sure we do, but at the bottom of the system, you have a distribution box that converts the lines going up in two times 100 Mbit/s per pair.

It is discreet and still it’s shining blue on the right of the Adamson logo, it is the small LED indicating a CS7P model!

SLU : Does this distribution exist?

Didier Dal Fitto : Yes, we’ve seen it, it is a Power Distribution System where network data and mains travel separately. So we have a first safety thanks to the dual signal per cable, and you can still secure the whole thing with the “up and down back up cable” we mentioned above for each group of 4 boxes.

SLU : But at start will you specify an analog back-up?

Didier Dal Fitto : …If users want it… It’s part of a big debate at the moment. To make an analogy (no pun intended, Ed.), when the PLM (Lab.gruppen) were first used, everyone were also sending out analog back-up lines… (we cut him)

Didier Dal Fitto : Not all the time. We have fixed installations with no more analog lines whatsoever, only redundant network, and even a service company who doesn’t always does it in festivals. They just trust the network.

SLU : Let’s come back to the nice amplified boxes to come, are they in production already?

Didier Dal Fitto : Yes, they are, CS7P and CS10P. All finished, including presets.

Guy Vignet (DV2 Associate Director, and a Monster of Commercial and Marketing) : One can put an order now for any of these two models and the deliveries should occur after summer break, in September.

SLU : What use for each of these units?

Didier Dal Fitto : Front and side fill, mobile kits for theatres, distributed systems fo clubs or elsewhere, thanks to ease of cabling… everywhere, in fact. The CS7P can also act as an efficient proximity monitor for mixers on tour. It is remarkable, almost… esoteric (laughs)!. 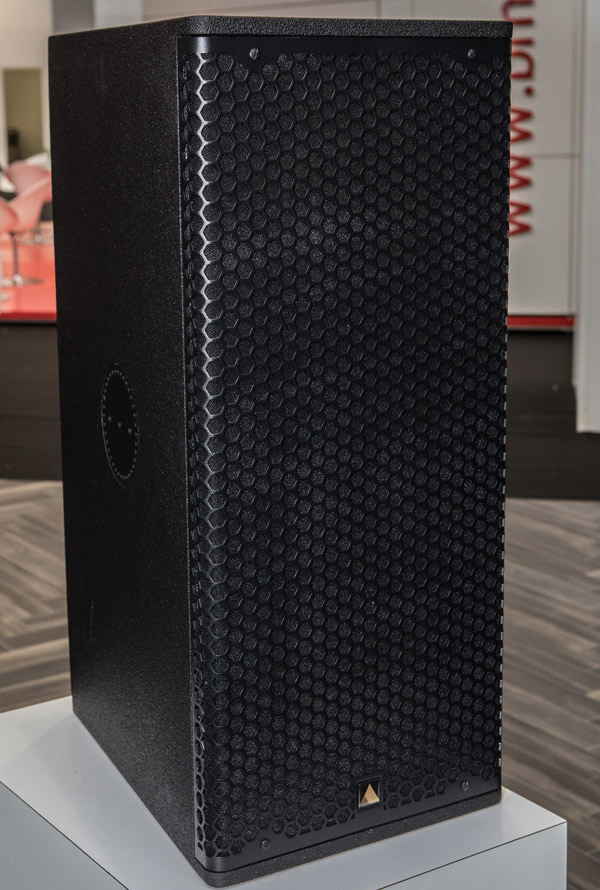 SLU : We can imagine the Americans happy with self-powered speakers, but what about French and European installers?

Guy Vignet : Out of 5 big names in rental and service, 4 said “yeah, great!”
It’s new, we start with a sympathetic a priori, the reputation of the brand and a convenience of implementation that everyone greets.

SLU : OK for the Point Source models, but what about the Line Source units, i.e. CS7 and CS10?

Didier Dal Fitto : You’ll have to wait for end of 2019. The production of the amplifiers modules is just starting, but there’s still some work to be done on the quite sophisticated software that will come with these newbies.
It is a software totally integrated in Blueprint, coming as extensions, the control, the patch, the EQ, the measurement, the diagnosis unit by unit, and more.
This « Super » Blueprint already exists and is functional, but it must be totally debugged before being launched for every kind of user.

Benoit Cabot, Director of R&D and Morten Lave, Network Specialist for Adamson, remind us why they went for AVB and the extra layer of the Milan network, crucial for the interoperability (link here);

SLU : OK, so let’s summarize. For example, we have a mixing console sending out AES…

Didier Dal Fitto : You enter the gateway, then a 16 input/16 output AVB matrix, which will be the heart of your system as a central marshalling and sync hub for all the data flows. The signal is then sent out in AVB to the afore mentioned PDS (Power Distribution Systems) to Stageleft and Stageright in Gigabit. From these points, it is split in redundancy up in 2 x 100 megabits towards the speakers, and all this is monitored by the future Blueprint. It is a brand new system.

Guy Vignet : We’ve seen in Canada that the system will be controlled by two large touchscreens. You need ease of use. There’s some “sweetie” also in the pipeline.

Didier Dal Fitto : No, better than this (smiles). In Canada they call it optimisation, but some others call it Array Control. We’ve heard that, too, and it will be incorporated as a plug-in inside Blueprint (definitely Super Blueprint!).
This optimisation algorithm will control each box, and this is where it all makes sense, as each speaker is amplified separately with its own DSP, so it’s very easy to provide this type of function which wouldn’t work with speakers linked by two or more on the same amp. 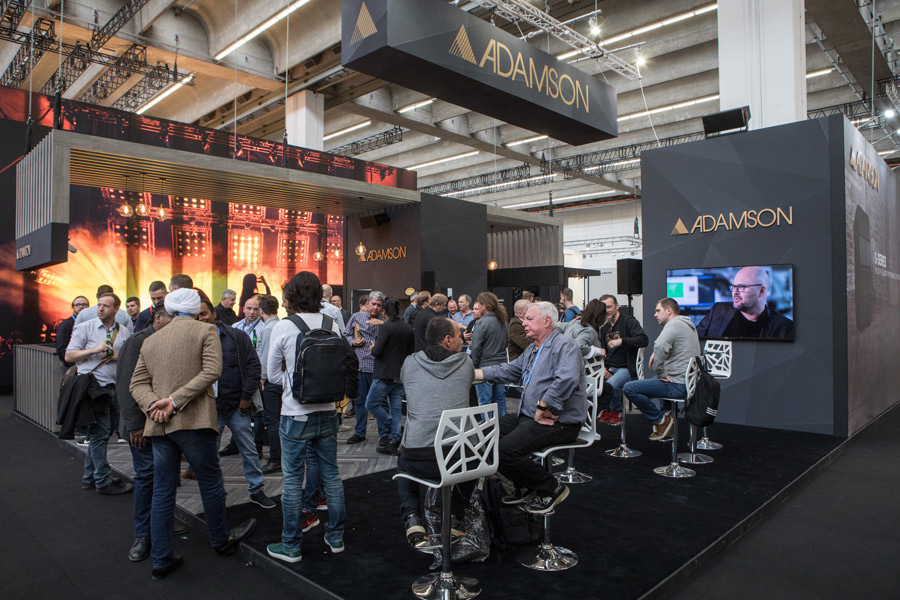 There’s some more space to be found for the Adamson stand! Always struggling for a seat ;0)

SLU : To end up with a smile, « while innovation beats around the bush, it’s business as usual for DV2 and Adamason?” (laughs)

Guy Vignet : But we’re all relaxed guys here! Adamson has a very clear vision of the future, an efficient production tool, and champion R&D team. The years to come will be passionate for this brand, for DV2 as a distributor and partner, and for all our customers. It’s great that Adamson begins this essential transition with a compact product, so all the brand users will slowly learn how to use it along with its new technology. There is an existing products base already out there, there’s no reason to mess it up.