With the 2019 opening of the ‘Wonder Box’ indoor amusement park, the Paradise Fun-City complex has become the largest entertainment site in South Korea and features Amadeus speakers throughout its public spaces. An external view of Paradise City.

Amadeus has announced the install of more than 200 of their speakers in the ‘Paradise Fun City’ complex located in front of Incheon International Airport, the largest hub airport in Northeast Asia. The install of the complex’s media infrastructure was designed, built and supervised by C2 Artechnolozy. With the 2019 opening of the ‘Wonder Box’ indoor amusement park, the Paradise Fun-City complex has become the largest entertainment site in South Korea. 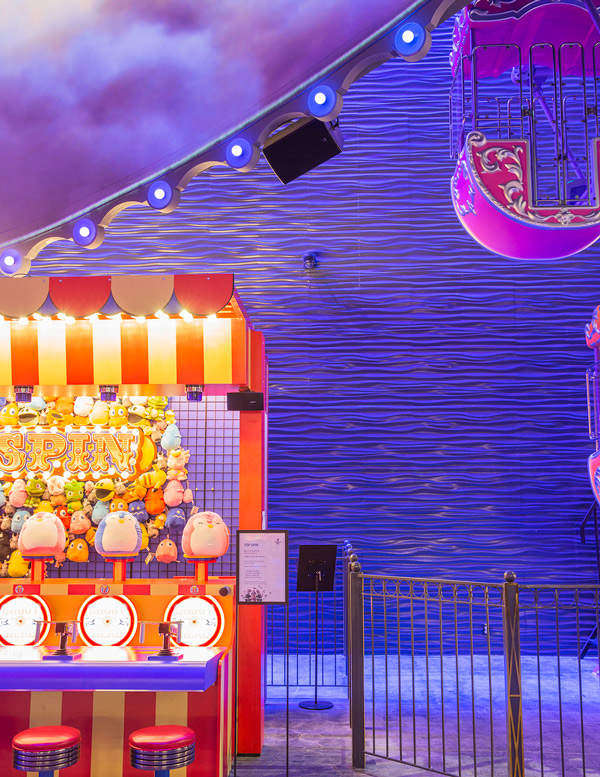 Inside the Wonder Box amusement park, one of the 200 Amadeus speakers.

C2 Artechnolozy was deeply involved in the design phase of the newly opened Paradise-City phase 1-2 project which includes ‘Chroma’, the largest club in East Asia which encompasses three separate nightclubs, Wonder Box, and the boutique hotel Art Paradiso. The complex also features the ‘Art Garden’ and the ‘Paradise Walk’ areas.

C2 was responsible for designing and supervising the entire resort’s audio, video, and lighting systems, as well as the design, development, and supervision of the EBGM System (Enhanced Background Music). In addition, the company was responsible for the design and construction of both the Chroma staging system and the audio, video, and lighting systems for the recently opened Wonder Box. Paradise City’s plan was to build a media infrastructure that differentiated itself from existing hotels and convention areas and C2 has delivered. 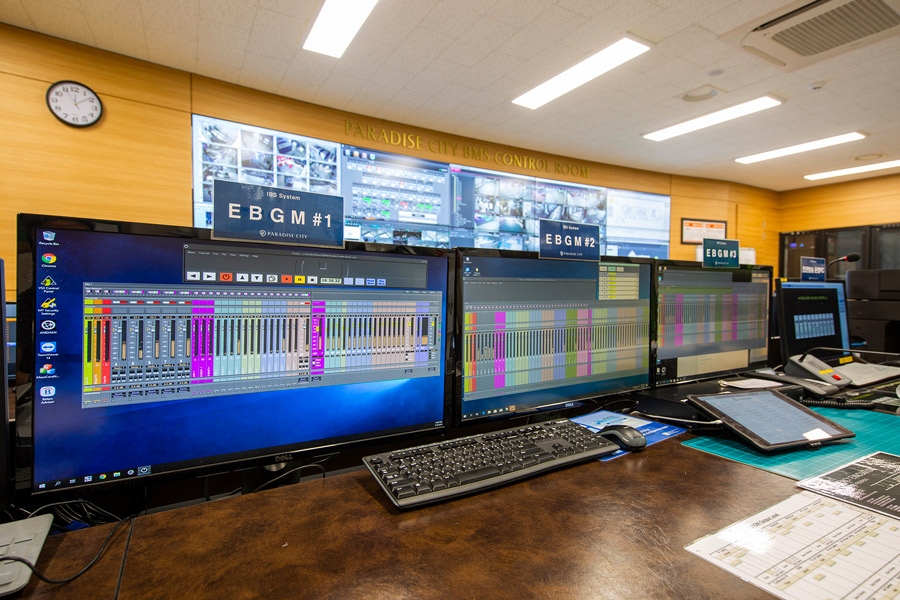 “From a media point of view, the facilities of existing hotels and convention centers seem to lack a lot of options to represent an ‘Art-tainment’ Resort, which combines art and entertainment,” stated Dongyup Kwak, the CEO of C2 Artechnolozy, who ended up building state of the art integrated media infrastructure with few limits for each of the venues in Paradise City.

“C2 first wanted to upgrade the BGM, which is delivered to all facilities,” added Kwak. “However, the system for emergency broadcasting could not be changed. So we focused on the main spaces of the facility and differentiated it from the existing BGM system. We named this system Enhanced BGM (EBGM), it is the first and greatest example of the world’s highest quality sound for background music. 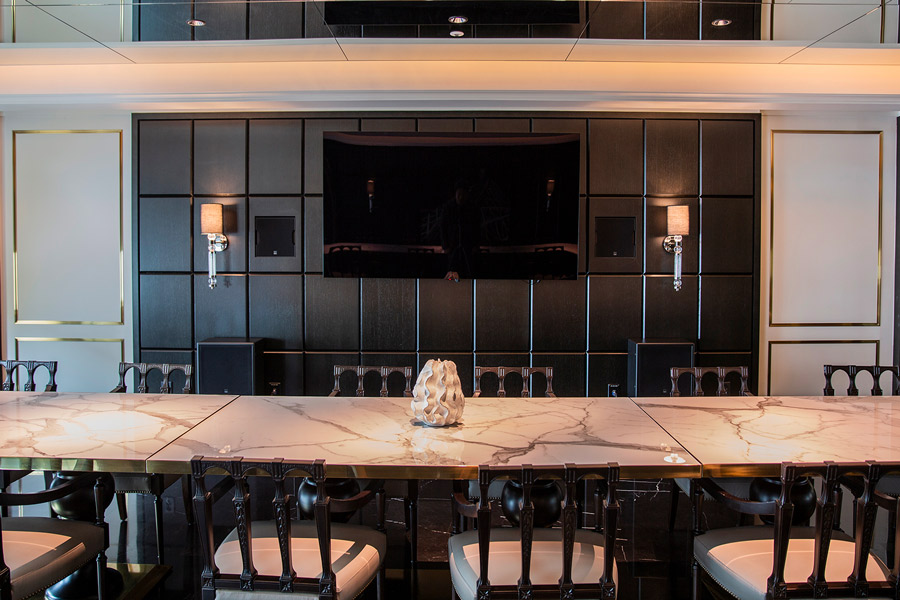 A meeting room where working must be a pain, and listening a DXD stream a wonder…

We applied the DXD sample rate to go beyond the sound quality limit of 48 kHz of existing hardware-based DSP sound source transmission and control systems.”

The EBGM system is based on the Ovation Server, Horus, and Hapi interfaces from Swiss manufacturer, Merging Technologies. The system is capable of up to 384KHz or DXD (DXD – Digital eXtreme Definition at 352.8KHz) via the AES67 RAVENNA network.
The 352.8KHz DXD EBGM was applied to 69 zones with 145 outputs, including four buildings and three outdoor spaces, and is the first time anywhere in the world that a background music system supports and operates at DXD/384KHz quality throughout a whole resort area. Inside the Art Paradisio boutique hotel lobby, a pair of sub + C series Amadeus sporting a specific fabric to match the overall style.

Utilizing Apple’s iPad and Ovation’s Web Server functions, C2 designed the control interface so that each space within Paradise City can be individually controlled for its volume and channel, as well as for selecting sound sources of various genres through channel selection. With the iPad control system, the user can create a playlist to suit the location and taste, or it can be set to play back the selected music in a random order. 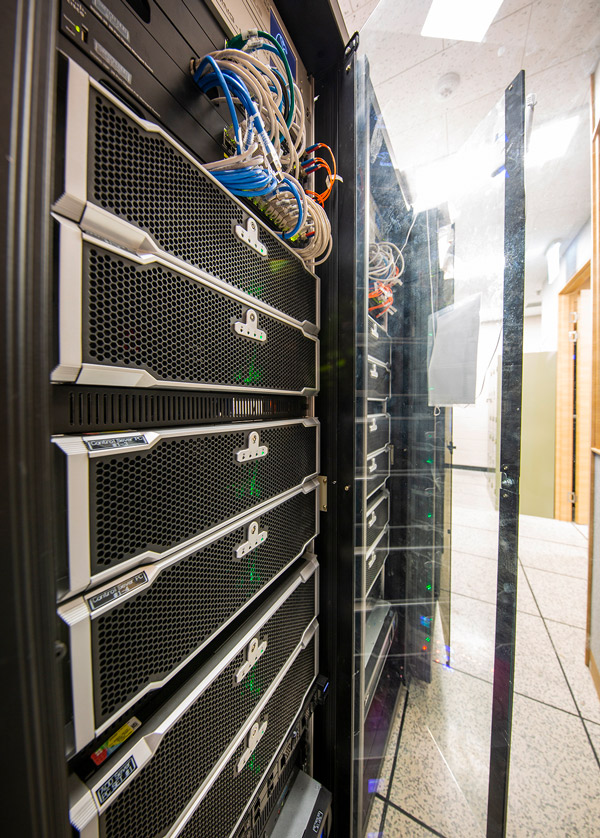 Powersoft power amplifiers are applied throughout the boutique hotel Art Paradiso to power the speaker system. “Amadeus and Powersoft were the best choices to harmonize the quality of the sound source,” noted Kwak.
The Art Gallery at Paradise City is equipped with hanging tracks, power, and network terminals, with Amadeus PMX 5 D and ML 12 D active speakers to enable installation flexibility depending on the needs of the art installation. “The Amadeus speaker is the only one that can satisfy both the luxury and high quality of hotels and art galleries.

The system uses the AES67 DXD format for the EBGM system as well as a separate operation using a Dante Network. The art gallery is also set up to utilize projectors with an HD Base-T network to provide an optimized infrastructure for media art,” explains Kwak. C2 studied the interior and architectural design of Paradise City with Professor Kim Ji-kyung of Tuneworx, and specified the ideal speaker arrangement for each space, including the Cimer Spa, Art Garden, Paradise Walk, the Chroma ticket booth, and the Highline Park area. In the ‘Cimer Spa’ section of Paradise City, Amadeus PMX5 and ML12 Slim subwoofers were installed along with other complimentary speakers and audio equipment necessary for the indoor/outdoor environment. The very heart of the complex.

There are two more buildings on either side of a wide square across from the hotel and spa buildings. One of the two buildings is the Wonder Box indoor ‘amusement park’. C2’s team managed the Wonder Box project: John Kim was Executive Manager, Suk-Hoon Lee was the Project Manager and designed all the audio, video and lighting systems including integration, Taechan Moon was in charge of AV construction. Joshua Jeon was in charge of whole 2D-3D design, and designers Eunjung Kim and Yunhee Choi Jeongeun worked on the 2D-3D simulation and design of the AV system. 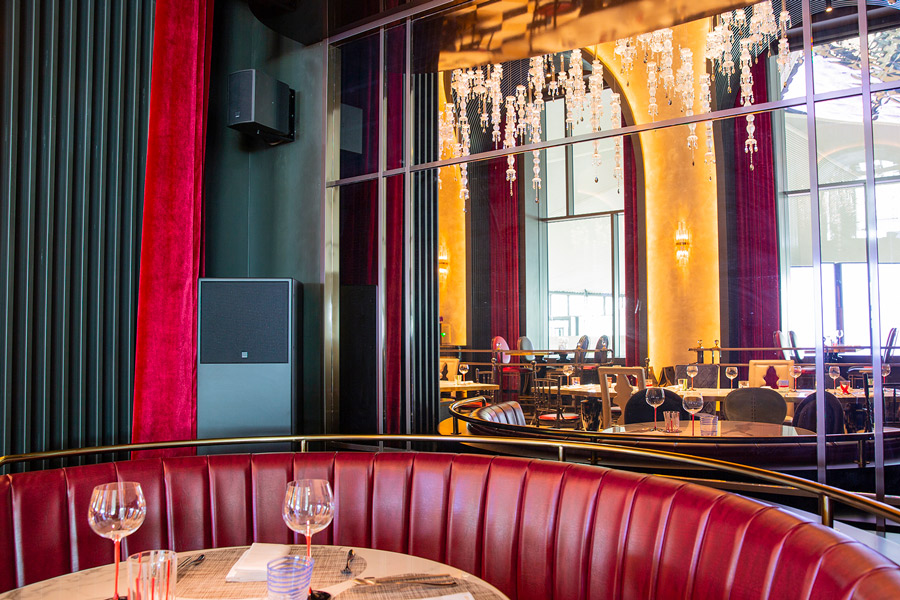 The Serasé restaurant lounge bar. If needed, the high quality SPL is guaranteed.

C2 collaborated with Canada’s Moment Factory, which is in charge of the content, it took over one year to prepare and finally open Wonder Box on March 31, 2019.

Wonder Box is equipped with over 60 Amadeus speakers with Powersoft amplifiers and 6 Ovation servers from Merging Technologies for the show control and audio control.
It also equipped the space with 14 Panasonic 21,000 ANSI laser projectors projecting two large indoor screens of curtains which are 33 meters in length and 9 meters in height. The site also has two 10,000 ANSI laser projectors and two Grand MA 3 Consoles, one full size and one Compact XT for the lighting. The system can create immersive AV using the audio, video and lighting system.

One of the most striking things about all of the installs at Paradise City is that the sound, video, and lighting control systems have redundant components created by C2 design, so that if some part of a control system fails, the lights, sound or video can still continue to be controlled without downtime. 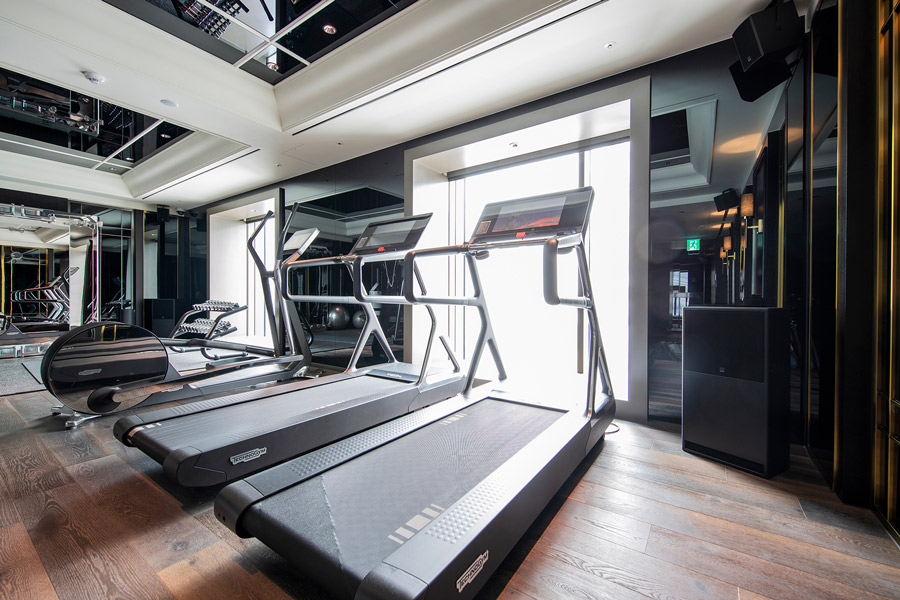 No way to find somewhere else such PA in a gym…

C2 Artechnolozy was involved in many aspects for Paradise Fun-City from design, through supervision, and construction, and also many of its operations. The company manages the day-to-day directing and operating of the club’s systems, under the direction of Kim Nam-hoon, C2’s staff, and several partner companies, they run all the technical systems and produce a slightly different show every hour. Dongyup Kwak, concludes, “The Paradise install was a huge challenge for us, no one has ever done a project this large in Korea.”

Paradise City was first opened at the end of September 2018, and with the opening of Wonder Box on March 31, 2019, the entire project was fully opened. As a biggest single site of its kind in Korea, it was difficult to build such a media infrastructure, but C2 has overcome all of the project’s difficulties and has completed and stabilized the many audio and visual systems.

Amadeus Speakers are featured throughout the Paradise City complex: