Ayrton, superstar in the USA, introduces the Karif-LT and the Shamal-LT back home in Paris at JTSE. Rewarded with huge orders in the United States, Ayrton continues to rewrite lighting standards with two Wash-Beam hybrid moving heads dedicated to long throw (LT). The Karif-LT Beam expresses its power in the Parisian sky during a night premiere on a Roof top.

The Karif-LT and the Shamal-LT combine the power of the most recent LED engines available with its French optical know-how, and effects never seen before.
Thus, the Karif-LT gets the full advantage of 300 Watts of 7,500K white LED, delivering 15,000 lumens through a 168 mm lens and a 15:1 zoom, ranging from 3 ° to 45 °. 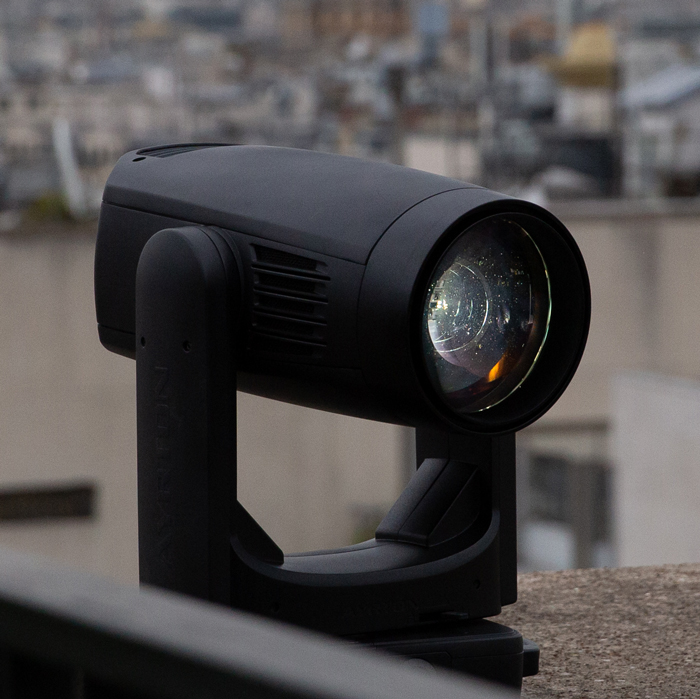 The Karif-LT : a compact format and a very large output lens.

As a Beam-type projector, its powerful condensed beam plays with an incredible spiral wheel of 39 gobos and 4 different prisms.

Equipped with an infinite PAN motor, the Karif also knows how to do in full subtlety with this recognized Ayrton color mixing system, this time supported by a color wheel with variable CTO integrated directly on the disc.
First launched as a prototype at Plasa in London, it was introduced to JTSE visitors in an even improved version.

The Shamal-LT, having made a sensational opening at Las Vegas LDI, is a huge WashBeam which releases a brand new LED engine of almost 1000 Watts, and delivers a record light output of 50,000 lumens. Its 225 mm lens and its 3° to 36° zoom ratio allow it to fly over the biggest stages or events by far.

The first deliveries of the Karif-LT are scheduled for beginning of 2020, before those of the Shamal-LT.