City Theatrical is an old respectful Broadway company with more than 30 years of innovation in US stage lighting, in particular musicals, but, a bit like the star of Hello Dolly, she knows how to make a come-back now and then with new ideas, then return to the game sometimes unexpectedly.
On the occasion of the compatibility update of the DMXcat software with the Multiverse, let’s go back in detail on this powerful multi-universe transmitter, launched in Europe in its latest version during the last Prolight + Sound show in Frankfurt. 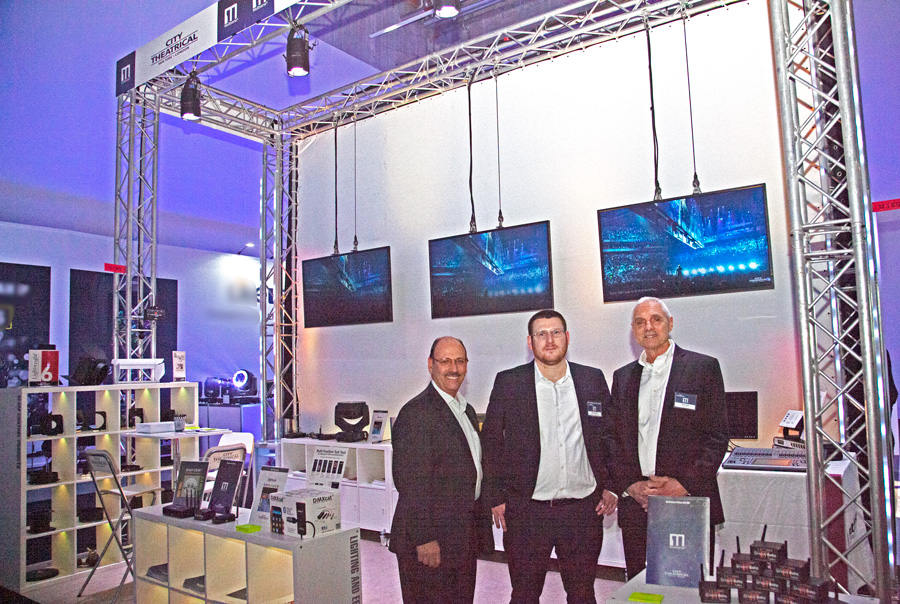 The Prolight+Sound City Theatrical stand in Frankfurt, Gary Vilardi (left) and his Blitzkrieg team of two, aiming to take the European market by storm, whatever the Swedish competition…

They made a very smart move only a few years ago with the DMXcat, a nifty battery operated bi-directional compact box with wireless BlueTooth control from any smartphone, and were very much involved with the development of pixel-per-pixel controlled Ledstrips for musicals, theatre or music shows with their QolorPIX and QolorSTRIP ranges.

So, I was keen to find their booth at latest Prolight+Sound and ask straight to Gary Vilardi my ritual “Wazzup Gary!”

SoundLightUp: Hi Gary, I’m still waiting for the actual definitive launch of the Pathway in its full-blown version (ol’ private joke between us, ED.), so anything else really new? (smiles)

Gary Vilardi, City Theatrical Marketing Director: You’re damn right Bruno, it should be finished anytime now, it will definitely help create next generation lighting networks with open system products that harness the power and convenience of Ethernet.
In the meantime, we’re presenting here, for the first time in Europe, a brand new concept that will create a true Wireless DMX transmission revolution! Here is the Multiverse, with 10 complete DMX512 universes sent simultaneously from the same box.

SLU: I think I remember your ShoW Baby model already could transmit 4 different universes at the same time, is this one a bigger brother on steroids? 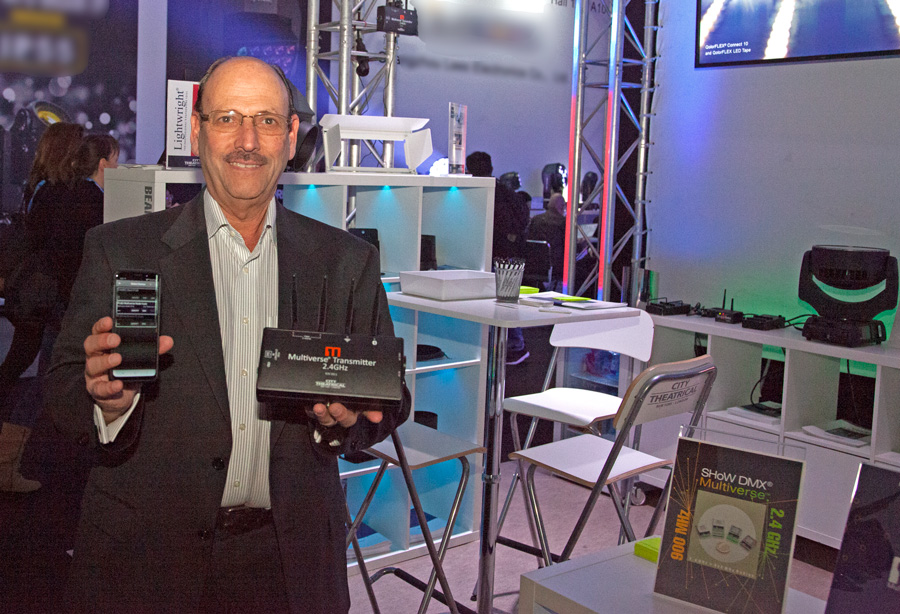 Gary Vilardi introducing proudly the two sides of the Multiverse environment, hardware with a Multiverse, and software with the already famous DMXcat app, now directly connecting your smartphone to the latter.

Gary Vilardi: Yes… and no, as it is a much bigger box anyway, with four antennas. Of course, we kept the compatibility with the ShoW Baby. By the way, in its latest version the ShoW Baby can handle 6 universes in total!
The Multiverse patent derives from the fifth generation of our wireless DMX developments, so we do know what we’re talking about here… (smiles)

SLU: How does it work, then?

Gary Vilardi: First of all, it relies on an intelligent real-time management of all the DMX data sent at the same time : we deliver more data, but using less radio energy. To do this, we reimagined wireless DMX globally, and discovered that we could reduce the amount of radio energy used for wireless DMX by more than 90%, using an innovative new radio system and by improving how we broadcast and merge all the DMX/RDM data.

As most wireless DMX systems broadcast all 512 DMX slots per universe whether there is anything patched into them or not, Multiverse automatically designates only the DMX slots it needs to broadcast, thereby saving unneeded radio energy. We call this Auto Dynamic Limited Burst. At the same time, Multiverse uses what we call MDMX to reduce, in many cases by over 90%, the data transmission requirements for a show.
For instance, on a Broadway show, there are a lot of DMX universes where not much is happening at certain moments: set-up static color for a while, LED strips embedded into stage costumes, even generic lighting for a whole song or drama act. Of course, we still make sure we keep perfect fidelity in this kind of mission critical show environment.

SLU: This all makes sense, Gary, but then you’re not compatible at all with the very popular (in Europe, that is) Swedish « standards » Lumen Radio CRMX® and Wireless Solutions W-DMX®? 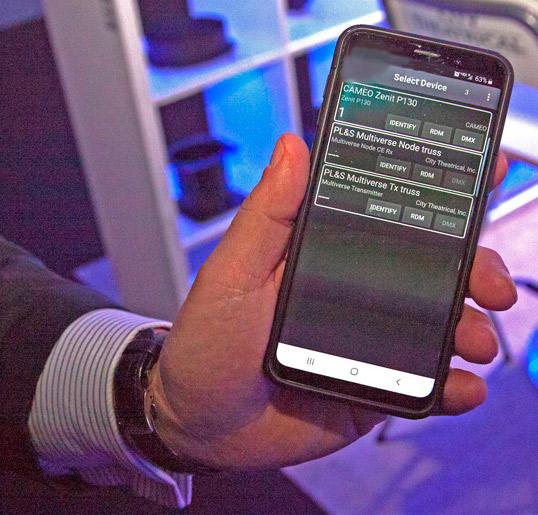 An example of a DMXcat app aplication, now directly online with the Multiverse via your iOs or Android smartphone. You can notice here a total and bi-directional control of a Multiverse, and a Multiverse Node.

Gary Vilardi: By all means, not at all ! (laughs) But we don’t care, for projectors’ manufacturers we can supply the Multiverse Module, tiny ultra-compact TRX PCB they can fit in any fixture.
For those who just to use our own standard with other wired fixtures, we can provide the Multiverse Node, you can see some units here and there fixed to our stand’s truss, it’s very flexible with several ways to hang it or hook it up.

To complement these informations, I have to add that all our system is RDM compatible, we even added an extra “reliability” layer called MRDM, allowing both DMX and RDM to operate at the same time. This opens up new benefits for lighting users, not available from a wired system. (or you would have to add an “intelligent” Node somewhere to filter out the unwanted or messy data, Ed.)

SLU: Some people might remember that you were given a « Best Debuting Product » Award during latest LDI show in November 2018, what’s really new in this updated version of Multiverse?

Gary Vilardi: We improved it a lot for European users, for instance, the 900 MHz is not used over here. We also added a very handy and useful feature, the direct control by the DMXcat app. This is where the 4th antenna comes in… You don’t have to get a DMXcat to control and manage a Multiverse box, just download the DMXcat into your smartphone, and there you go, both in DMX512 and in RDM.

SLU: Isn’t it a bit risky to open up this remote control by Bluetooth, then? There are more and more DMXcat users out there in our industry, and now if you say you can even use just your smartphone, would that be too many control attempts on the same set? And I’m not even referring to jokers, dummies or malicious people?

Gary Vilardi: No, there’s no danger here, as several Multiverses can operate at the same time. Then, we also have equipped the Multiverse with the SHoW Key Security feature, locking any system and password protecting it from any other Multiverse systems operating in the area, accidentally or not.
On Broadway you don’t mess around with the unexpected, « The Show must go on! » (laughs)