An interview of the men behind the lighting design of the Eiffel Tower during Bastille Day.
Every year on July 14, France is adorned in its most beautiful colors to celebrate the Republic and to a lesser extent to commemorate the storming of the Bastille in 1789. Of course, the Eiffel Tower forms a magnificent backdrop for a grand fireworks display. 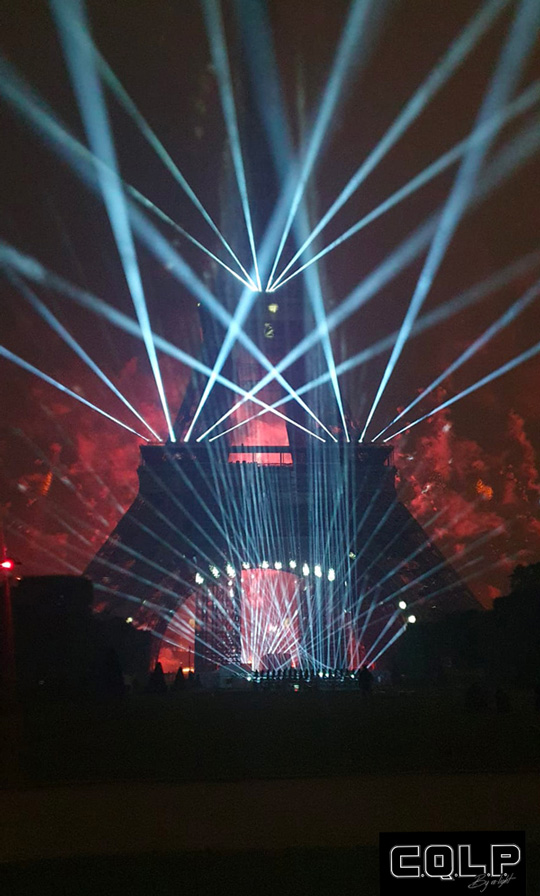 Tightest zoom and beam reducer games depending on the shooting levels to sculpt the light of the Proteus. © CQLP

The task of the lighting designer is to ensure that the Eiffel Tower, located at the heart of the pyrotechnics, remains visible across Paris and does not get lost in the fiery display. Projecting light in daylight-type conditions is not that easy, as you might expect. Yannick Duc and Maxime Raffin of Expert Event, led by Emmanuel “Manu” Pouget, reveal their secrets and above all their thoughts behind this memorable occasion. (from left to right) Yannick Duc, Emmanuel Pouget and Maxime Raffin. A great understanding which gradually led Yannick, Manu and Maxime to work together on this project.

SLU : Maxime, how did you come to work on this project with Yannick?

Maxime Raffin : It’s thanks to Manu, the manager at Expert Events. We had already worked together on the lighting of the Eiffel Tower in 2011. At that time, this was one of my first major projects but I had already been able to come up with a few ideas and one thing led to another, we were again chosen in 2019 and then again in 2021. We are starting to be a little more experienced and Yannick is the director of photography. 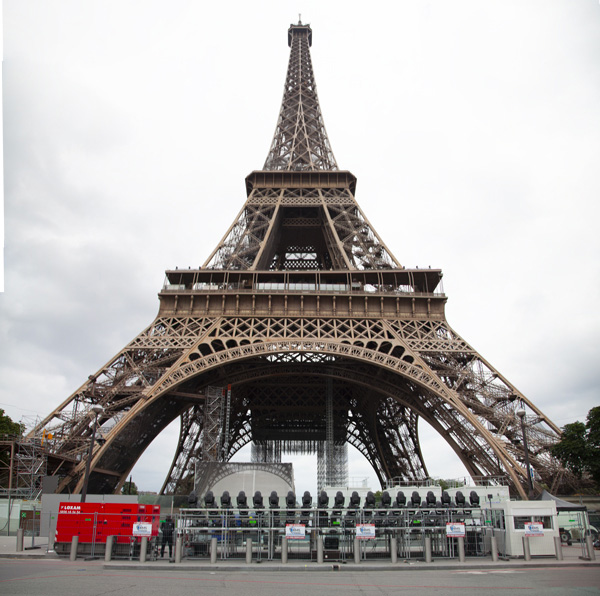 The 79 Proteus Hybrid Elation installed on the Trocadéro side.

Following our experience in 2019, we chose to specify 188 Elation Proteus Hybrid IP65 luminaires (fitted with a Philips MSD Platinum 21R 470W lamp) to project maximum light effects without having to protect them. We could have used other projectors protected by transparent coverings but at the risk of creating a double reflection and artefacts on the beam. In addition, this very powerful projector was available in large quantities.

SLU : So your choice was a trade-off between power and quantity?

Maxime Raffin : Yes, because previously we had installed 69 devices on the ground, but there was a lack of luminous intensity. Today there are 158 on the ground : 79 on the Trocadéro side and 79 on the École Militaire side. But in total, 188 Elation Proteus Hybrid IP65 projectors were deployed for this project. 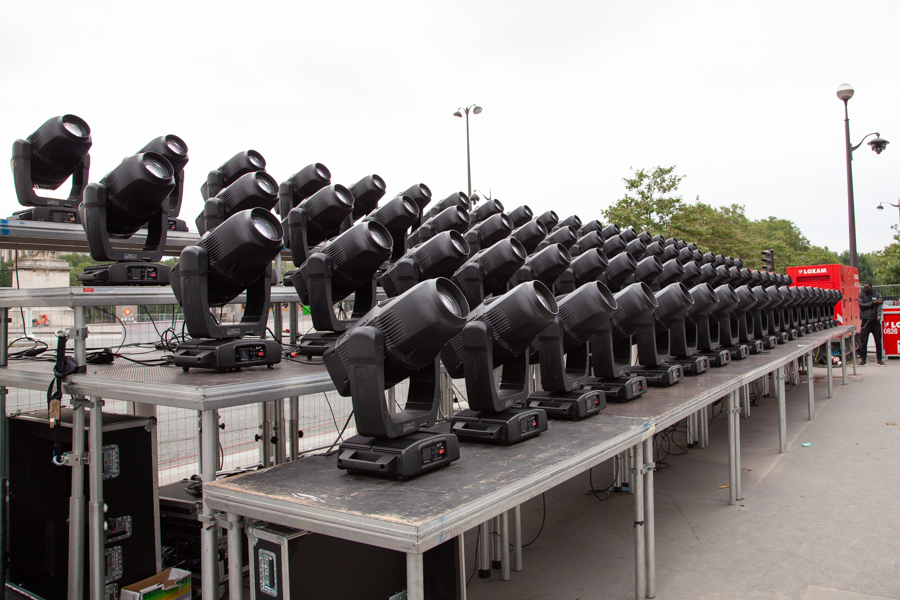 In total, 188 Elation Proteus Hybrid IP 65 projectors will have been deployed for this project.

The difficulty with this project is that, although the fixture may be very powerful, the proximity means that we lose surface reflection. There are ways to improve this point by moving the fixtures back, but we are limited by the public on one side and the shadows cast from the lampposts located on a bridge on the other side. Furthermore, the fireworks are very imposing and the Tower tends to disappear as night turns to day and the beams struggle to impose themselves. Different tilt settings to cover the entire surface of the tower. 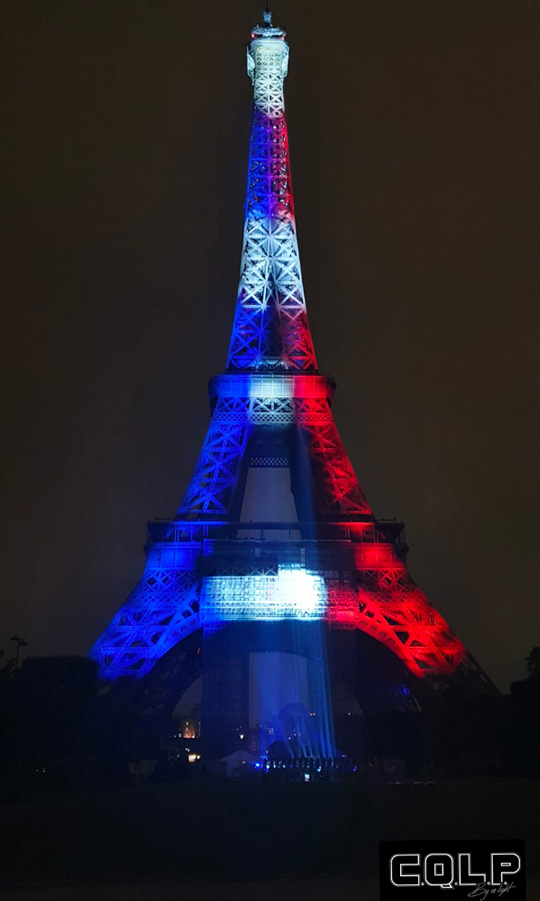 The Eiffel Tower illuminated precisely to the top. © CQLP

SLU : How did you coordinate with the David Proteau team from Ruggieri, who were in charge of the fireworks?

Maxime Raffin : The fireworks are timecoded and therefore we also had to be in sync. David gives the instruction to Yannick Duc who follows it to the millimeter. We could switch to manual for fun, but it wouldn’t really matter.

Our show has a lot of effects. Yannick detailed all the titles of the soundtrack to mark the different rhythms or atmospheres like the bells on the song “Aerodynamic” by Daft Punk or on “Think” by Aretha Franklin, which we illustrated in green after having debated on the best color to represent freedom.

In the end, David Proteau, the designer for the fireworks, decided on green. Conversely, there are times when the light becomes more discreet and simple so as not to steal the show.

SLU : How did the creative phase go?

Maxime Raffin : We only learned two weeks ago that we had been chosen for this project. Normally, we have more time to prepare and with the CQLP Awards taking place simultaneously in addition to other sites we were working on, it was really a lot, hence the dark circles under my eyes today (laughs). So we worked together with Yannick who has a console at home and I have to say that he did it. He’s a very good one; he has magic fingers. 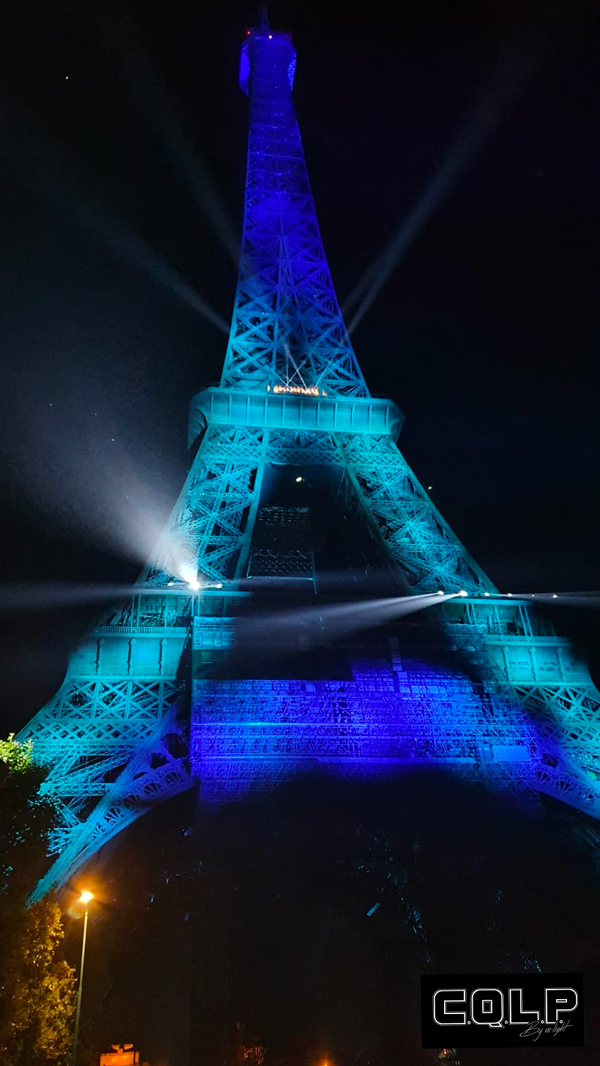 The Proteus hybrid with their beam, spot and wash functions meet all of Maxime and Yannick’s lighting needs. © CQLP 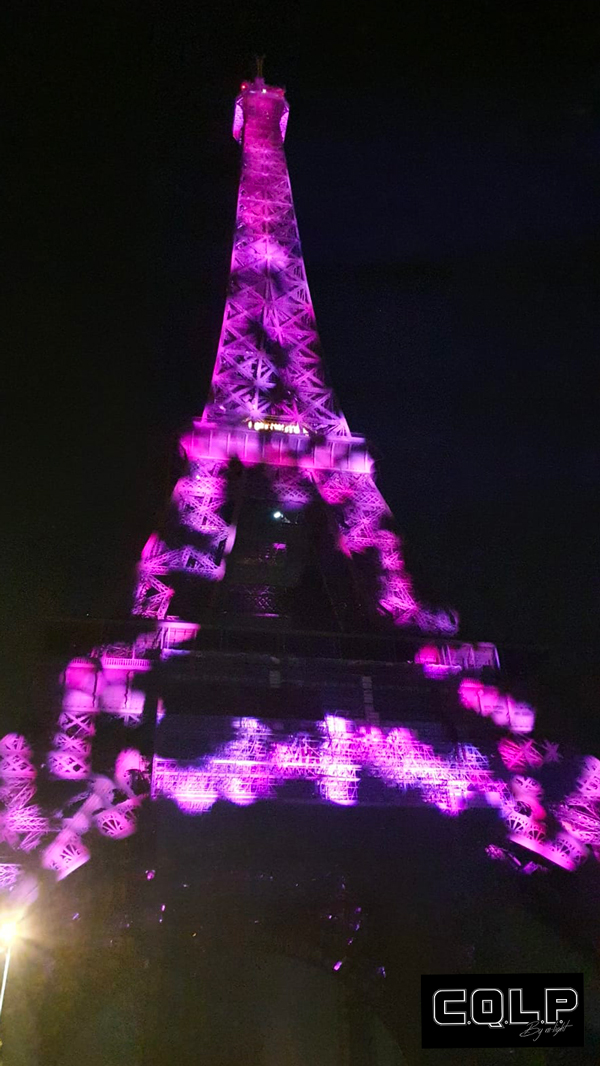 The align function  on grandMA2 allow Yannick to simulate video effects on the Eiffel Tower. ©CQLP

SLU : What visualization software did you work on?

Maxime Raffin : We work with Wysiwyg. Yannick prepares reference points and then we tap on the tower, at precise points and in tight bundles, to install our show. For this project, we installed a control point at the foot of the Eiffel Tower on either side and a third at the Trocadéro. A triangle fiber optic network connects consoles and projectors located on the ground, first and second floors. This network is redundant in the event that one of the sides is interrupted.

Wysiwyg 3D of the show

Emmanuel « Manu » Pouget : We have a global system, that is to say optical fiber, which is distributed from the Trocadéro to the end of the Champ-de-Mars and which returns to complete redundancy. That is to say that all the stations, all the places where there is a console, amps, nodes for light, intercoms, benefit from a fiber box. 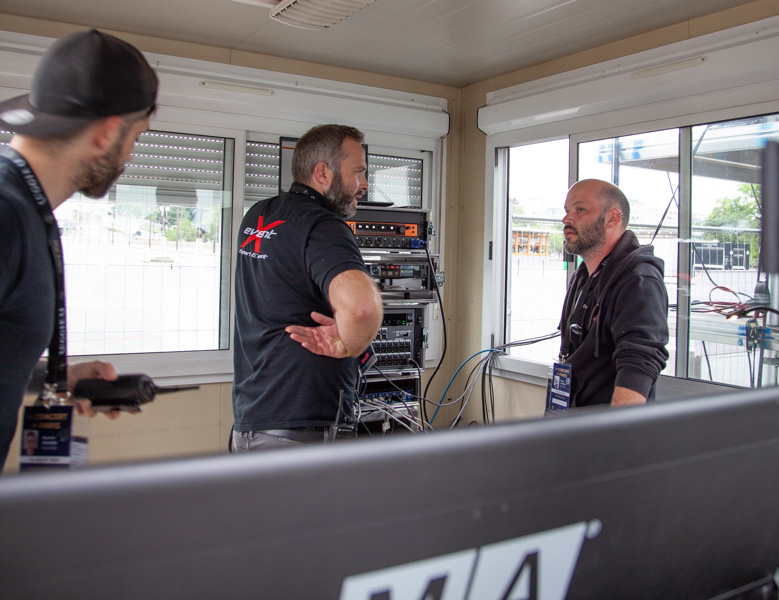 The consoles are also redundant so if you lose one, the other takes over and they communicate together to the NPU using the MA-Net protocol. Finally, all the projectors are controlled in Artnet and connected to the nodes in standard DMX.

SLU : Was this choice of fiber due to the distance involved?

Manu : Yes. Today, with such a distance, there is not really a choice even if we did do otherwise 15 years ago with the problems that it caused. This is almost plug-and-play with a little upstream configuration. Once we connect to the network, we send the profiles to all the workstations and it works instantly.
The big advantage of fiber is that it can carry all the signals over a single cable. We can then control the amplifiers, send Dante for sound, MA Net for light, we have a dedicated port for HF Bolero intercoms, with one antenna per floor of the Eiffel Tower, one further down and one at the Trocadero. 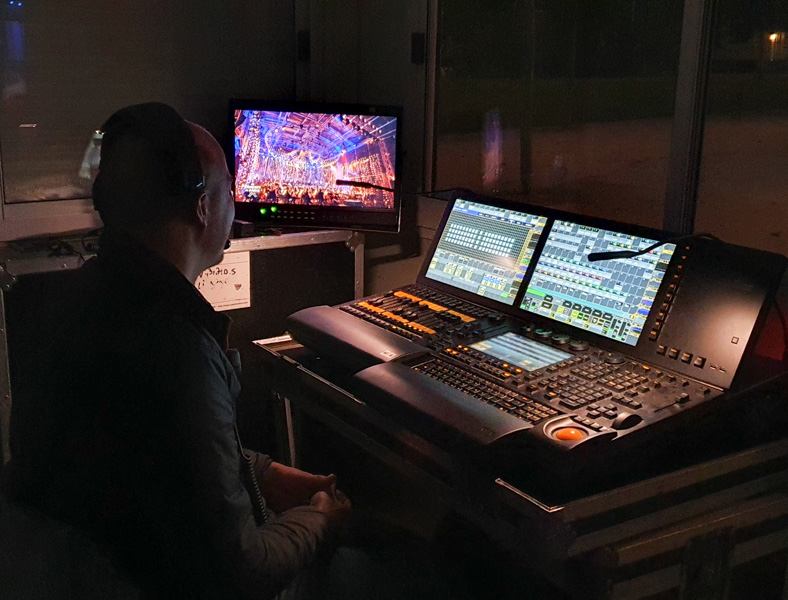 Maxime Raffin very attentive in front of his console while waiting for the start of the show which will be punctuated by a wave of explosions above his Algeco.

SLU : It must be nice to light up such a monument, it’s one of the emblems of Paris.

Maxime Raffin : We are still just as passionate and attentive, whether it is for the Eiffel Tower or for another building. But it is true that the Tower is different because it is not made up of solid surfaces. The arches create shadows and from the helicopter views you can watch the beams pass through; it’s visually interesting.

Yannick has managed to achieve quite interesting effects, sometimes with the impression that it is moving or falling apart. We’ve even been praised for the quality of the video effects (laughs). There is obviously no video projection but Yannick loves to be extremely precise and so it can give that feeling.
In addition, with the grandMA, “Align” function, which allows you to perform color gradients and alignments of gobos without having to encode the projectors one by one, it is perfectly mastered. The powerful beams of the Elation Proteus Hybrid, equipped with a Philips MSD Platinum 21R 470 W lamp cover the entire surface of the Eiffel Tower.

SLU : How did the rehearsals go?

Maxime Raffin : There were three days of encoding in Wysiwyg and then we worked 3 nights on site. In addition, the winner of the CQLP Awards, Alexandre Marcadé, had the honor to help design the last title. He was given a base and the instruction “have fun”.
For the finale, the light is not necessarily the most visible but for him it was a great experience and he was like a kid. It’s also a way for us to promote new (From left to right) Maxime Raffin, Yannick Duc, Emmanuel Pouget, Quentin Douriez, César Féraud and Alexandre Marcadé the winner of the CQLP competition who will have the honor of signing the last title of the show.

SLU : There are also 12 projectors on each side on the first floor and two rows of six fixtures on the second.

Maxime Raffin : These projectors are intended to illuminate the public in beams, to create effects and to illuminate the Eiffel Tower in color. The peculiarity this year is that the fireworks are in front of the fixtures, whereas usually it is the other way around. We therefore raised them a little by installing them on an enormous 20-meter arch, the bridges of which are held by heavy bases. 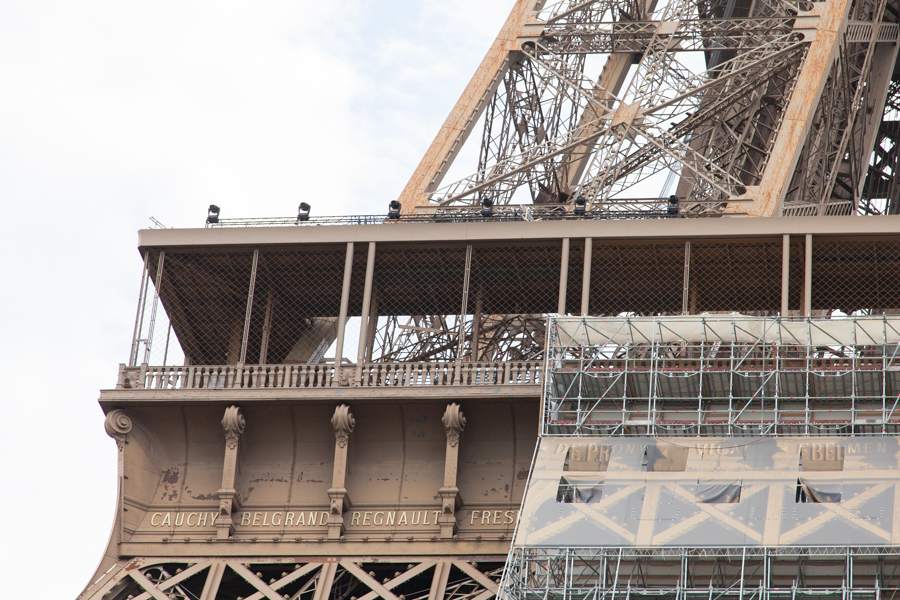 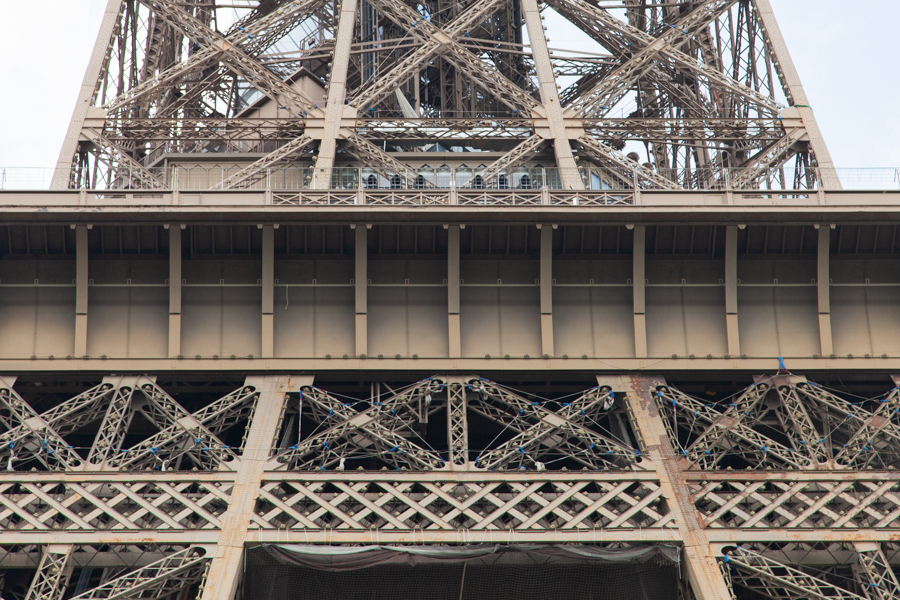 A great show and a great atmosphere within the team. We may know it by heart and see it again and again but the Eiffel Tower never ceases to amaze us, especially when it is adorned with multiple colored dots for Daft Punk, waves on the song “3SEX” by Indochine and Christine and the Queen, or projects her beams in perfect rhythm on “Blinding Lights” by The Weekend.
By the way, speaking of being in perfect rhythm, you have surely noticed that the fireworks also mark the timing. We salute the perfect mastery of David Proteau and his team and cannot wait for next year!

Original French version of interview can be viewed here. The Eiffel Tower with pretty projections and powerful beams that rival the explosions of fireworks. 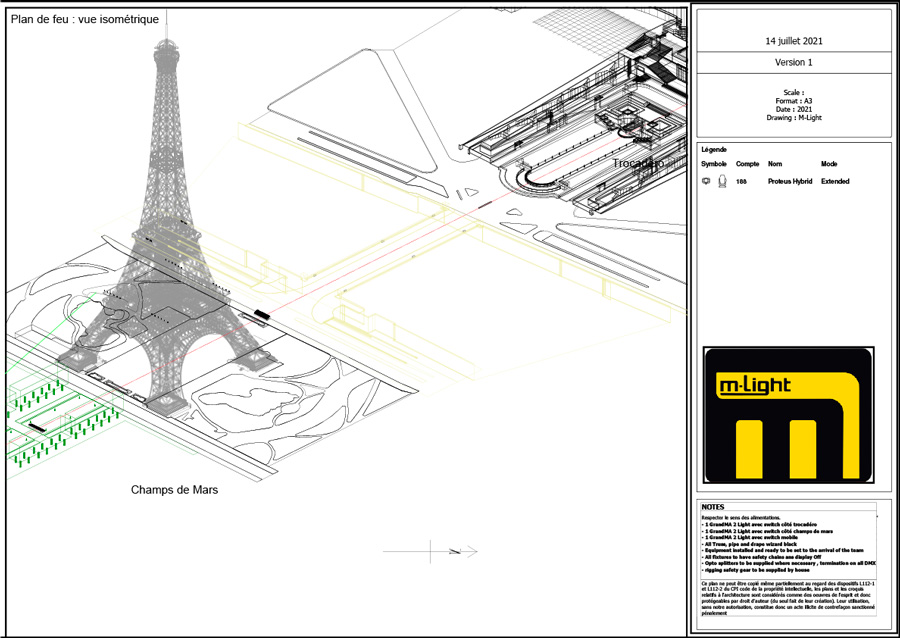