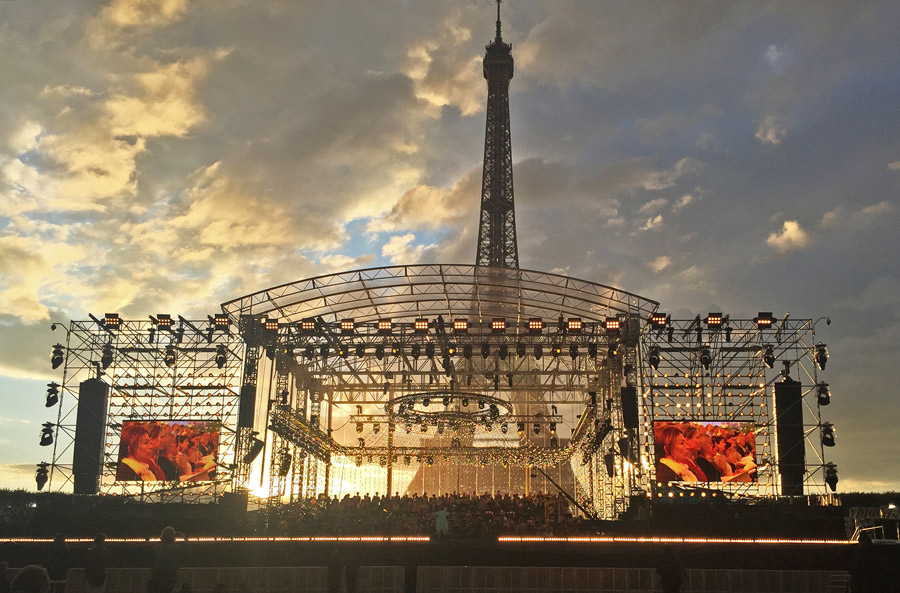 A powerful networking solution has been designed and installed by Radio France (French National Radio Broadcasting Consortium) & Importer Gilles Bouvard using Optocore and BroaMan products for the National Day Grand Concert on the 14 juillet at the Champ de Mars, just in front of the Eiffel Tower. 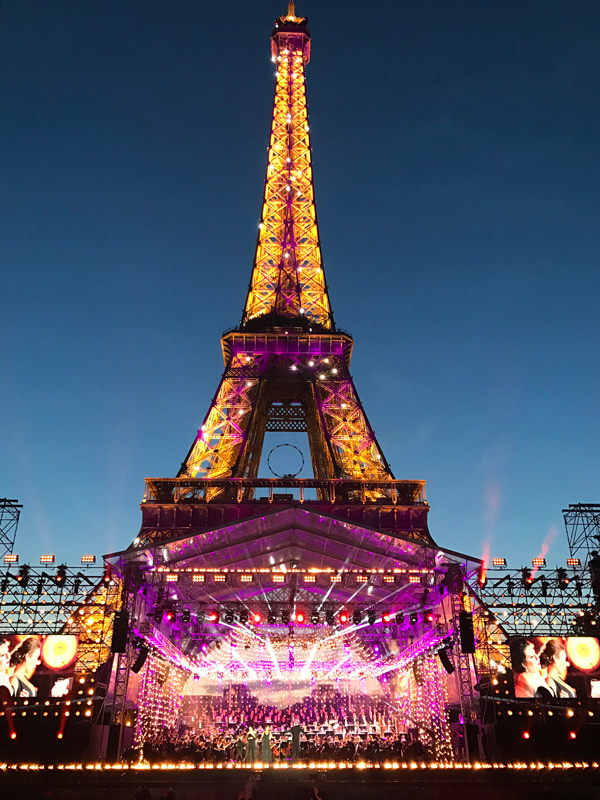 The Grand Concert de Paris takes place every year at the foot of the Eiffel Tower, in the Champ de Mars. This year, a crowd of 300,000 people assembled to listen to the concert and see the impressive firework display, while a record audience of 3 million viewers tuned in to watch the spectacle on television.

Specialising in the delivery of large-scale shows around the world, Gilles Bouvard Events and Shows (GB4D) regularly uses Optocore and BroaMan fiber optic converters for the construction of networks over long distances, particularly in the Champ de Mars, where they have been hired by Radio France since 2015.

But as requirements evolve in line with the technological advancement, a highly innovative approach was adopted this year to build on the site wide Optocore redundant optical loop backbone that has been deployed for the previous four years. To capture the audio this year, no fewer than 152 Optocore X6R preamps (FX and TP) were in use.

This was the result of earlier successful trials: “We had conducted several experiments with Radio France before the event, including the recording and capture of a jazz concert in 2018, with immersive sound, using a 22/2 multi-channel mix, Gilles Bouvard explained.” 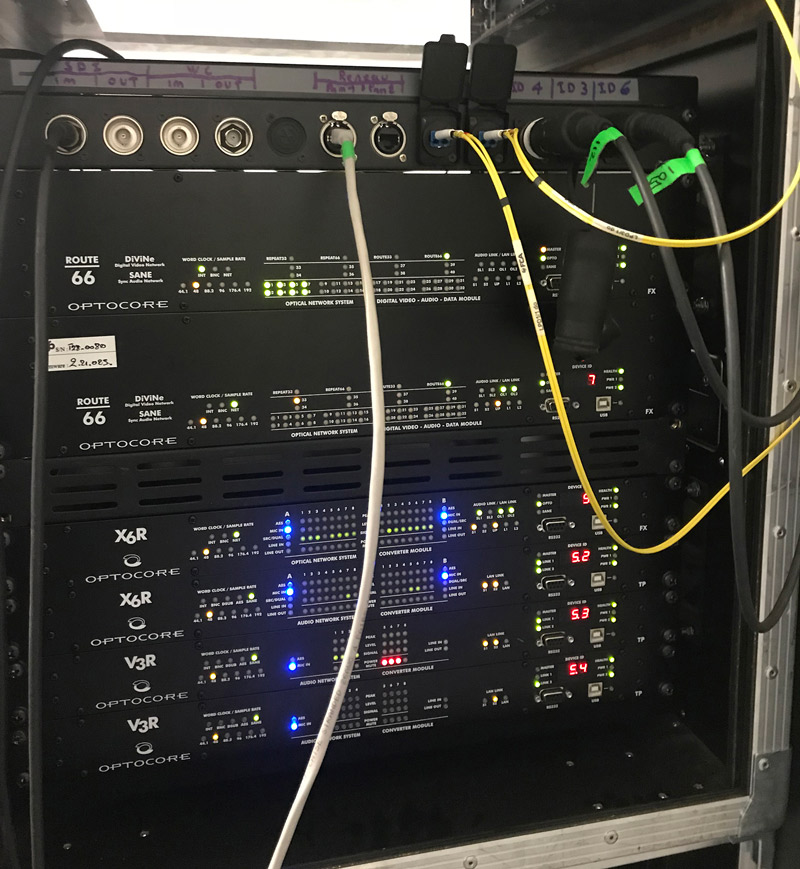 The idea itself emanated from Pascal Besnard and Bruno Lompech from Radio France, resulting in the BroaMan / Optocore equipment for this extraordinary concert being installed at La Maison de la Radio.

Bruno Lompech takes up the story. “Before thinking about mixing 22:2 specifically, I thought of the huge possibilities of audio network coverage that Optocore offered, and I proposed it to our engineering department as an alternative to other more audio-oriented IP systems. From a standard concert we could imagine something way more innovative than a simple stereo mix to our FM transmitters.”

The audio recording was made using 48 Optocore preamps wired to a LAWO console for the antenna sound (directed by Stéphane Desmons). The concert was mixed by a Yamaha Nuage post-production console for the immersive sound.

“It was crazy!” exclaims Gilles Bouvard. “Everything was connected via a [BroaMan] MUX22-IVT/MADI, for audio and video.” 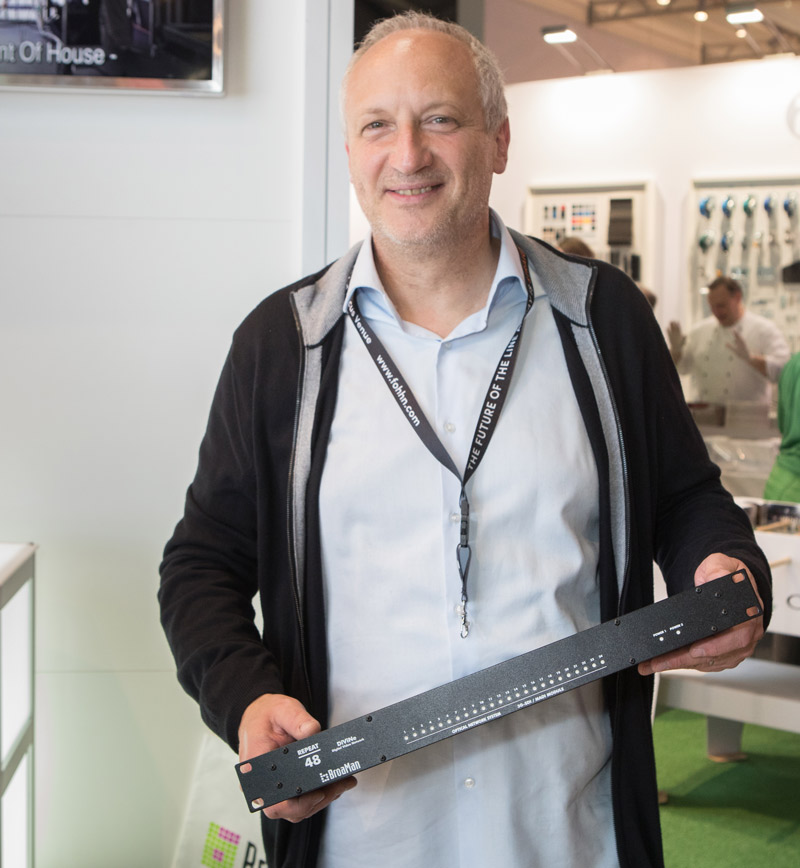 The effect on listeners was devastating. Tuning in to the live concert in Studio 105, they were immediately immersed in a 16:2 sound. The distribution of audio stems to the 18 inputs of the immersive sound converter was handled uniquely by the MUX22 IVT / MADI.
Meanwhile, a BroaMan Route 66 16/24 video router retrieved HD SDI camera signals, distributing the video to the sound engineers in all studios, and broadcasting the concert to the Dailymotion video-sharing platform, with images and sound immersively mixed in 22:2.

As Lompech explained, “We arranged to distribute to other studios because ultimately we wanted to be able to operate any mix from any of our studios to any or all of the mixing booths.”
Gilles pays tribute to Hervé Déjardin of Radio France and Pierric Charles for their work on this project, while François Lund (of GB4D) accompanied Gilles Bouvard in the implementation, alongside Diane Hivert, who is responsible for BroaMan / Optocore distribution in France.

Bruno Lompech also credits Hervé, whom he describes as “one of the world’s leading specialists in this technology.” He explained, “He saw the opportunity to mix live for our networks on the net, at the same time as mixing for our Radio Frequency Modulation (FM Radio) antennas, a mix more elaborate than the simple stereo mixing tradition. This was made possible not only by the quality of the Optocore preamps, but also the speed of distribution of audio channels from one studio to another, with almost zero latency.” 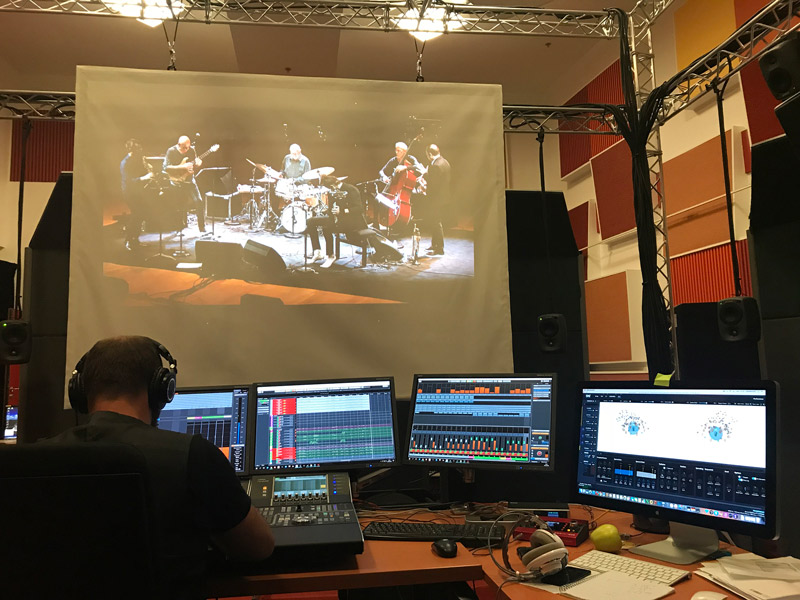 One of the secret studios in the heart of Radio France where Hervé Desjardins plays around with sound, his mind in the clouds and his hands on a Nuage… (bilingual pun, Ed.)

Once proof of concept was established, the BroaMan / Optocore topography was immediately earmarked for the Grand Concert in Paris. The relationship between Radio France, the expertise of the GB4D team and deployment of Optocore technology is based on mutual trust. “The process becomes easy; however, that said, nothing is left to chance in the preparation of equipment in our premises,” says Gilles. “Having the confidence of Radio France has the effect of putting more pressure on our shoulders. In that regard, credit goes to Titou Victor, who worked with me on this great concert, and Greg Poirier and François Lund in our workshops.”

In addition to Bruno Lompech, who is retiring this year, Gilles also singles out Laurent Fracchia, one of the sound directors of Radio France, who was stationed in the OB truck for the Grand Concert de Paris.
This 5.1 truck has already been equipped with 120 LAWO preamps. “But we are often asked to provide somewhere between 48 and 96 Optocore preamps for events, depending on the recordings to be made. This can take the mix total up to 216 preamps. 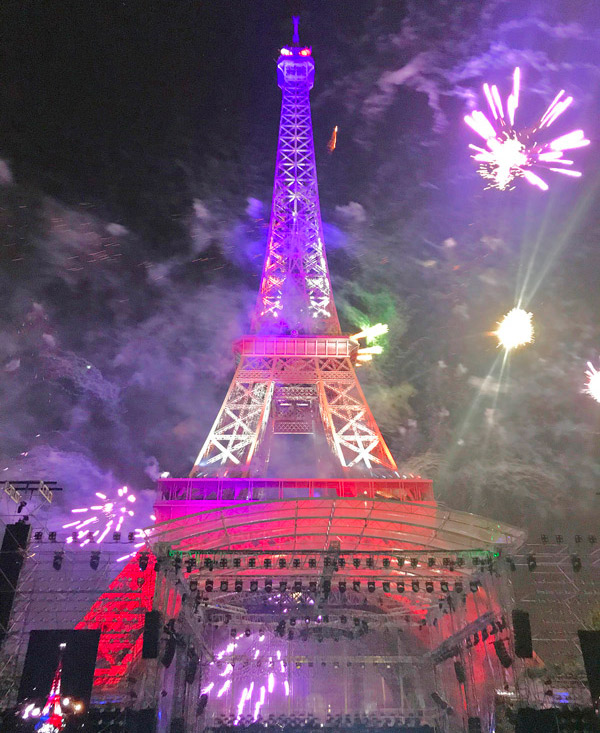 Optocore preamps quality is very high, and so it does not make any difference to Radio France’s sound engineers whether they use LAWO or Optocore preamps, especially when Optocore gain and phantom can be controlled directly from the LAWO console,” continues Gilles.

GB4D detailed 144 preamps for the stage—120 for FOH and 24 Dual Mic preamplifiers for solo monitors.
In addition, eight FOH preamps were used for the on-site public ambient sound, in addition to the live radio and television sound recording.

At the same time a multitrack recording was performed on a 128-channel Pyramix from the FOH console, facilitated by the additional MADI ports (3 and 4) on BroaMan’s bidirectional Video and Data MUX22-IVT/MADI converters, and M12—an Optocore MADI router with eight MADI ports.

It was Laurent Fracchia who realised the final sound mix for radio and television. He had prepared a rescue mix of four stereo groups that was distributed in MADI in the Yamaha DM1000 as a back-up if necessary. The console was implemented on the Optocore network to manage TV commercials and wireless microphones for pre-show presentations, and was also used to broadcast the soundtrack of the fireworks. In addition to X6R-FX-16MI and X6R-TP-16MI preamps for stage capture, a V3R-TP-8MI was used for ambience microphones.

The Optocore network also distributed audio stems for the Adamson broadcast systems.
Devices used for Stage Left, comprised an X6R-FX-8AES/8LO, and for Stage Right broadcasting, a V3R-TP with eight AES port and eight analog outputs (these were wired in backup on the amplifiers).
The French National TV channel was connected by an Optocore DD32R-FX, equipped with two older X6P-8MI/8LO for the sharing of resources, as well as by an X6R-FX-16AES-SRC and DD32R-FX. 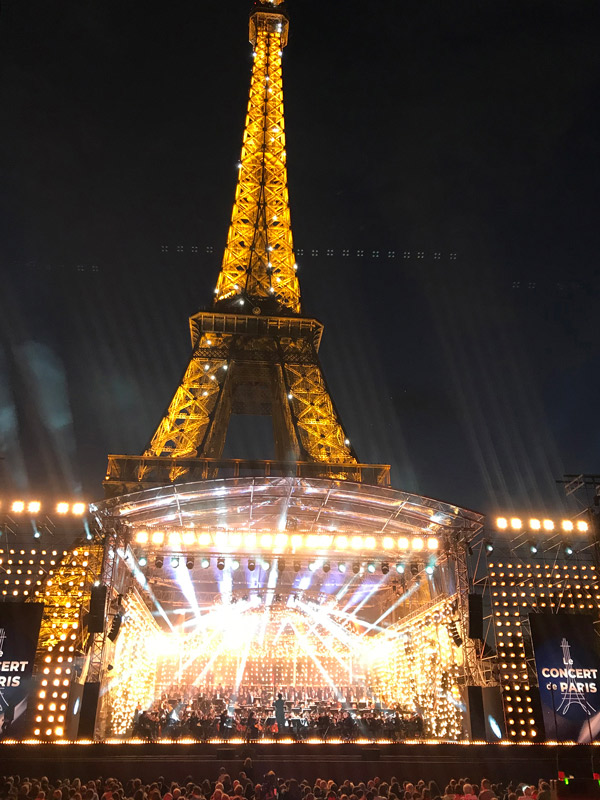 “The FOH broadcast processor was interfaced in the network via a DD32R-FX for AES streams, and an X6R-FX for analog backup on which was wired a V3R-TP-8MI to capture the atmosphere,” says Gilles. The four mixing consoles were connected to the MADI network, with two interfaces: BroaMan MUX22-IVT/MADI and Optocore M12.

As to the dual redundant fiber network, GB4D again conceived the transmission in two optical rings which he described as a “false star” (thus described because the ring was created in the Optocore Stagebox).

The first loop connected the FOH controller, the stage left broadcast and the stage left preamp rack. A second loop, deployed from the Optocore stage right preamp rack, connected the Radio France 5.1 and France TV OB vans.
Elsewhere, GB4D used a new Optocore AutoRouter simultaneously at another big French National Day concert in Toulouse, where they were responsible for the audio and video network, deploying the signal distribution on 14 points of sound and eight SDI points, requiring the installation of 6 km of fiber.

In conclusion, Bruno Lompech described the Paris experiment as “a complete success.” He said, “We were able to prove that from a dedicated event to a media source, thanks to Optocore’s intelligent and transparent distribution we could create a multitude of events simultaneously.
“All this was made possible thanks to the commitment on the ground of our teams, those of Radio France, but also the control of the technology by the teams of GB4D, who fully believed in our project. In parallel, the possibility of passing the video via the network between the different mixing and listening points has brought us enormous satisfaction, with a sufficiently straightforward implementation to fully convince us of the quality of the Optocore and BroaMan devices.”