Billie Eilish has wowed the world for being more than a global music phenomenon! A smart teenager with empathy, humanity, and honesty, she will tackle tough topics head-on and her many additional activities include fund-raising for crew and technicians affected by the global halt of live music and performance.
Sweeping off with five Grammy’s earlier in the year, the fertile collaboration with her, also Grammy award-winning, music producing brother Finneas and their contrasty intricate works that connect the dots of life, surreality and expression in a brainy mash of art, reflection and audacity has energized a massive and diverse fanbase. 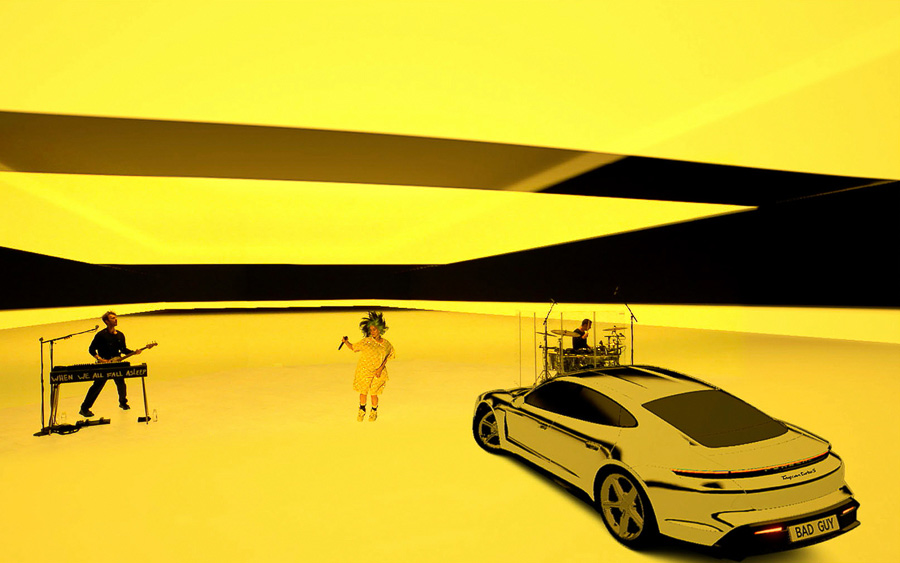 The first arena-sized world tour, “Where Do We Go”, scheduled to run from March to September 2020 halted abruptly after three shows, so the recent “Where Do We Go” ‘Livestream Concert’ re-united many talents from her acclaimed creative team. Under the Creative Direction of Billie Eilish and Moment Factory, collectively they worked to script and stage this stunning XR pay-per-view stream that delighted fans and lit up the internet as much in awe of the production as the magical Eilish aura! 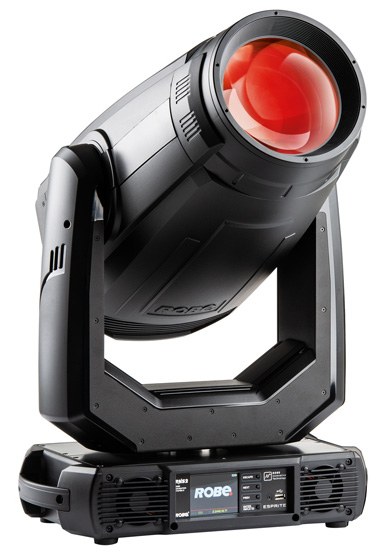 Lighting designer and director Tony Caporale from Tennessee-based Infinitus Vox was working as LD on the tour, and also came onboard in the role for the livestream concert, where he collaborated closely with lighting director Madigan Stehly of 22 Degrees who was working for XR Studios Burbank in Los Angeles which staged the performance, directed by Tarik Mikou from Moment Factory.

The overhead lighting rig at XR Studio comprised 48 x Robe Esprites … Robe’s newest Transferable Engine LED profile fixture. Six of them were running on a Robe RoboSpot system.
These were the only lights used for this highly acclaimed production, renowned for its stunning XR graphics and imagery that transported performers and audience through cities, oceans and incredible worlds during an intricate performance capturing all the live dynamics of Eilish’s music and dramaturgy, from massive anthemic moments to very personal messages.

Tony and the artist are usually in communication about how to bring her live performance visions to life, so the show development followed this format again as he also liaised with Madigan and lighting programmer Joe Watrach. While they finessed the lighting, Tarik and Moment Factory production manager James Richardson focused on integrating all the video elements – cameras, content and XR cohesively together. 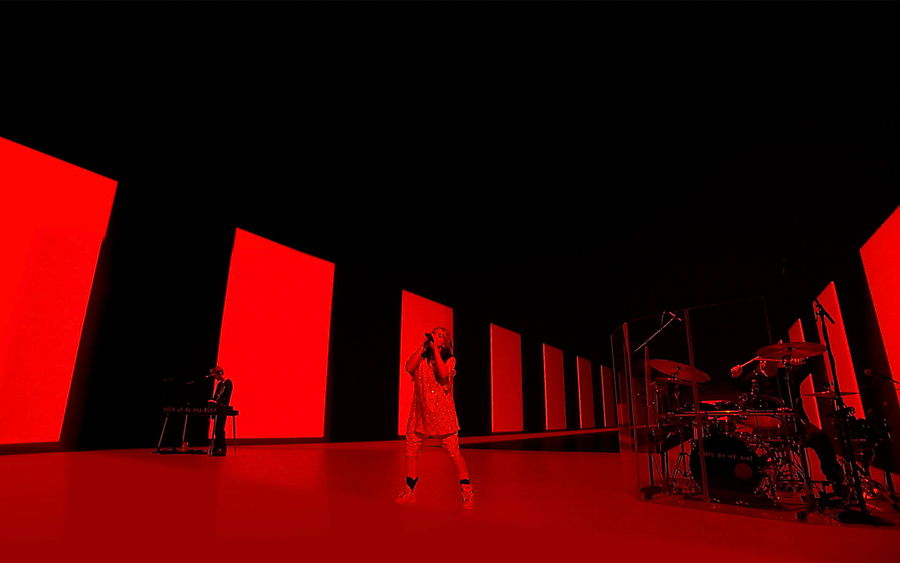 Lighting is fundamental to the XR concept and the overall studio space. “The process was challenging in the best possible way,” stated Tony with a big smile as he refined Eilish’s usually intense live lightshow to dovetail with the studio environment generally and augmented specific XR requirements for maximum impact.
Tarik, Tony, and Madigan’s perspectives united to engineer many innovative and fun approaches, all treading stealthily to enhance the XR illusion!

First, Tony and Madigan dissected the full setlist and discussed lighting treatments and effects they felt were both appropriate and achievable. “The core approach kept Billie well-lit within her respective color preferences for each song and then built looks that worked for the assorted XR environments,” explained Tony. 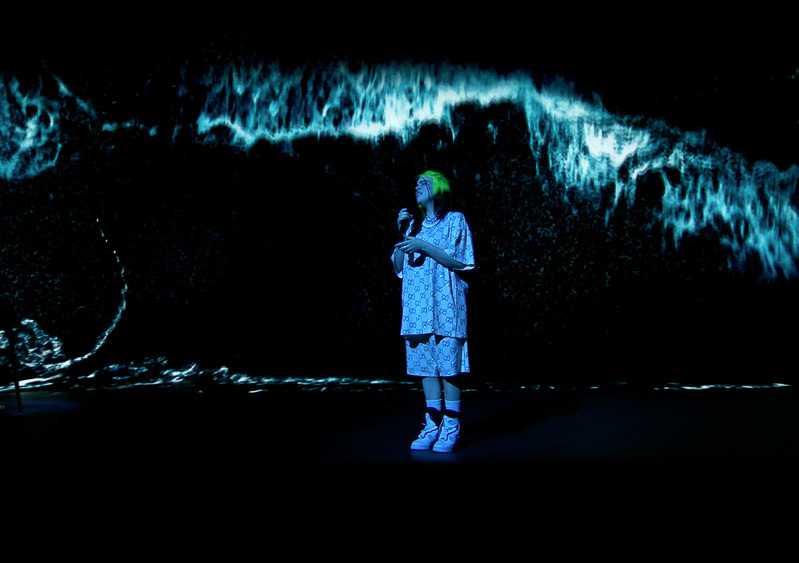 Preventing light bleeding onto the video walls was crucial so they carefully utilized specific lights that were concealed from certain camera angles in “a bit of smoke-and-mirrors,” states Tony.

The studio’s physical setup included a substantial stage / floorspace with three large Roe LED video walls, a video floor, and the overhead lighting rig with the 48 x Esprites plus a couple of additional fixtures on the floor for side lighting. On the other side of the studio was the socially distanced FOH setup with workstations for lighting, audio, video, media servers, cameras, directors, etc.

For XR Studios, which has produced a string of notable AR / XR streams, Esprites have emerged as a favorite moving light for various shoots due to their excellent color temperature range, consistency, high CRI and C-Pulse features, all vital elements for any type of camera-based production. However, this was the first time that Tony had worked with Robe Esprites – which were supplied by Fuse Technical Group together with the two RoboSpot systems and the grandMA control platform.

Six Esprites, five at the front and one at the rear of the studio, were controlled by two RoboSpot BaseStations which were positioned upstage right at ‘dimmer beach’ behind the video wall. The remote follow spot system was overseen on site by Fuse’s Matthew Kniss, and these six fixtures took care of all the key lighting for mainly Billie, but also Finneas if he was mobile during the performance. 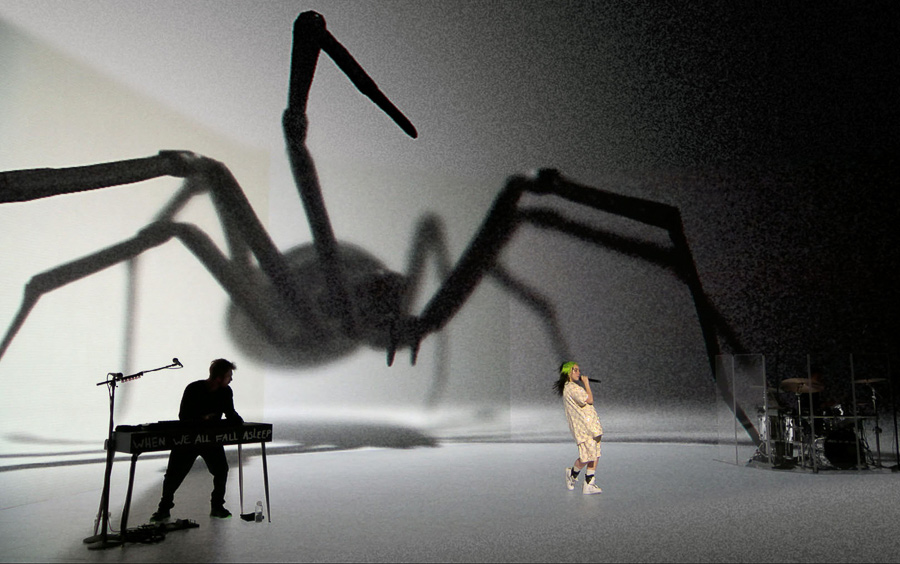 The other Esprites were utilized to add detail, texturing and drama to the different XR spaces created for the stream, from “you should see me in a crown”’s spooky minimalistic monochrome set with giant spider stalking Eilish to the cinematic deep ocean blue void of “ilomilo” which concluded with Eilish being eaten by an animated shark!
The Esprite’s shuttering system was extremely useful to Madigan and Tony in lighting this show, where the subjects were pinpointed without spillage onto the video elements, enhancing the spectacular XR drama.

For the ballad “i love you”, Billie and Finneas appeared in a vast space perched – almost suspended – on top of a stark monolithic column, lit overhead by a single Esprite shuttered perfectly to frame them and “complete the illusion” explained Tony.
For “No Time to Die”, Madigan came up with a neat idea recalls Tony, where the video content passes Billie and its movement is matched by light dimming in and out from a few of the Esprites. 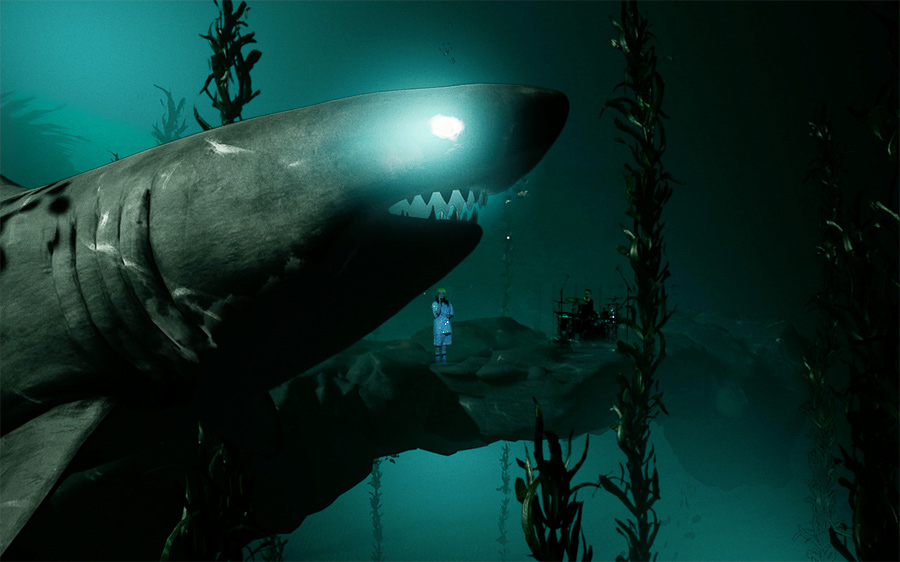 For “ilomilo”, Tony also activated the animation wheel to create an underwater ripple effect augmenting the undersea world.
Eilish herself is integrally involved in the visuality of all her performances, a fact that Tony relishes because it makes his life “a lot easier”.

A good communicator, usually after a short brief, Tony can run with a lighting interpretation of what she wants. “She’s very keen on having me accent different detail and subtleties,” he clarifies.

While this was his first encounter with Robe’s Esprites, Tony’s association with the brand goes back to his club lighting days and in fact to the ColorSpot 170 ATs and other maverick fixtures from Robe’s early years.
“Robe is always pushing forward, not just with lighting fixtures but also with related technologies like GDTF / MVR protocols, and their willingness to forge ahead and always show appreciation for their clients means a lot to many, not just to me but many others in the wider industry,” he stated.

Billie Eilish’s “Where Do We Go” Livestream Concert was enthusiastically received and is being hailed as a stand-out event in a sea of streaming shows that have proliferated this year as the pandemic has taken its toll on the live music industry worldwide. 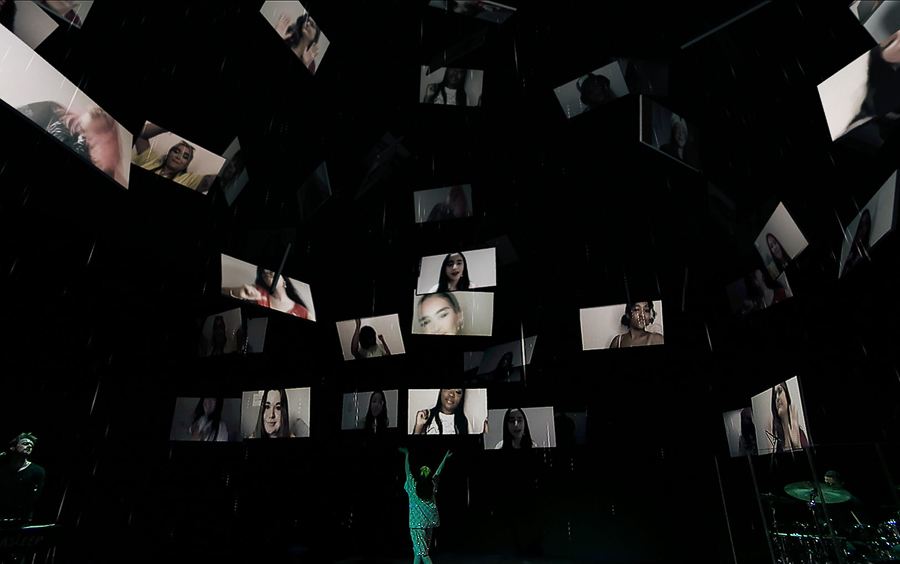 For more info on Robe lighting range of products, check the Robe website