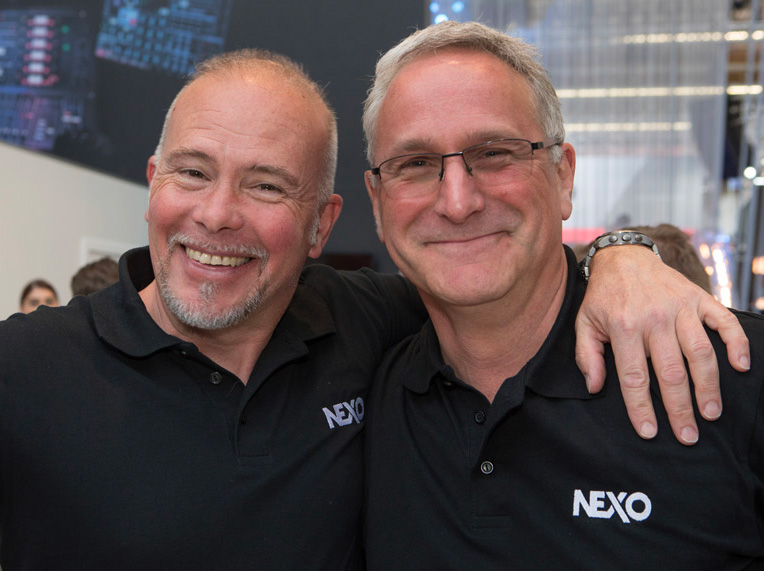 According to Jean Jacques Vias, NEXO’s Sales Manager for France, “the first step in the return to live events will be the staging of productions in smaller local venues, where social distancing and public health safety can be carefully controlled.

NEXO is seeing a lot of new clients in this sector, as public and private venues upgrade their infrastructure in anticipation of the end of lockdown.”

In Noyelles-Godault, near the France-Belgium border, the Espace Bernard Giraudeau is a multipurpose venue, which has a 100 m2 stage and can accommodate up to 540 people seated. It plays a central role in the social and cultural life of its region, accommodating concerts, conferences, games and seated dinners. The Espace Bernard Giraudeau and its ultrapurpose venue seen from the stage and its magnificent natural wood covering.

Engineers from NEXO’s ES Division attended the theatre to supervise the alignment and tuning of the new system. “It is a very reverberant room,” says Bertrand Billon, “but there is still a consistent ratio across the bandwidth.

Because there is a retractable bleacher stand of seating, we have two configurations, so we set up the system to switch from a seated audience to a full-standing one, where the line array clusters and outer front fills are moved.
We created two different scene memories in the NXAMPs and a custom page in NeMo (NEXO’s proprietary remote control monitoring software) so that it is easy to recall both set-ups.”

The GEO M6 compact line array system is proving especially popular with smaller auditoria, and three new installations demonstrate the versatility of these modules, which can be used in pairs, curved arrays of three or in line array of more. Paired with different NEXO subbass cabinets, they create a deceptively small SR solution, whilst being highly cost-effective in terms of amplification. 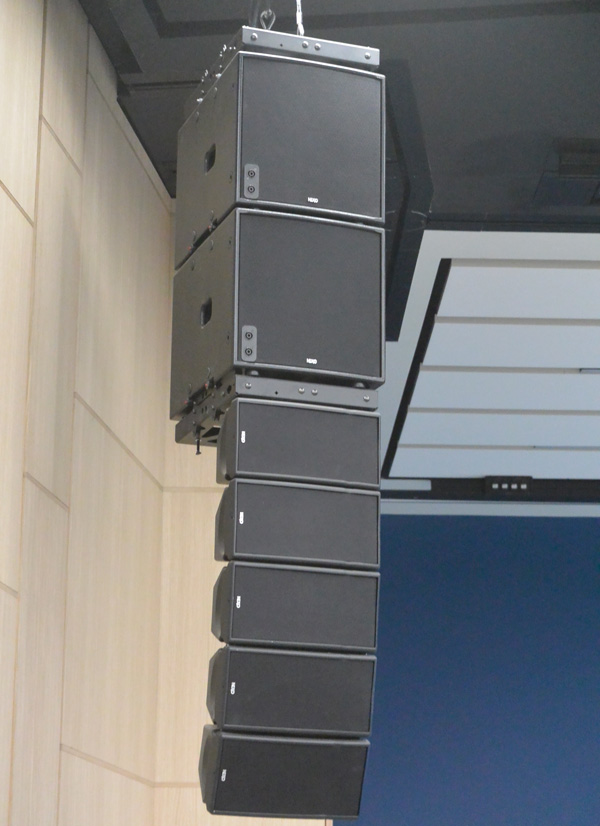 Five GEO M6 topped by a pair of MSUB12. Ready for meetings and some live music.

The well-known insurance company Thelem has a campus near Orleans, where it has extensively remodelled its existing facilities and constructed a new theatre auditorium for its corporate events.

Systems integrators Tech Audio worked closely with NEXO’s engineering support division to design and install a GEO M6 compact line array system, the smallest line array modules in the NEXO catalogue which allowed them to upsize the PA to handle music performance without having to use very large cabinets.

“We try as often as we can to fly the subs, in order to minimize the difference in level between the front and last rows,” explains Bertrand Billon.
“This specification had to be able to deliver a reasonable level and bandwidth for ‘light live music’ in addition to meetings.” 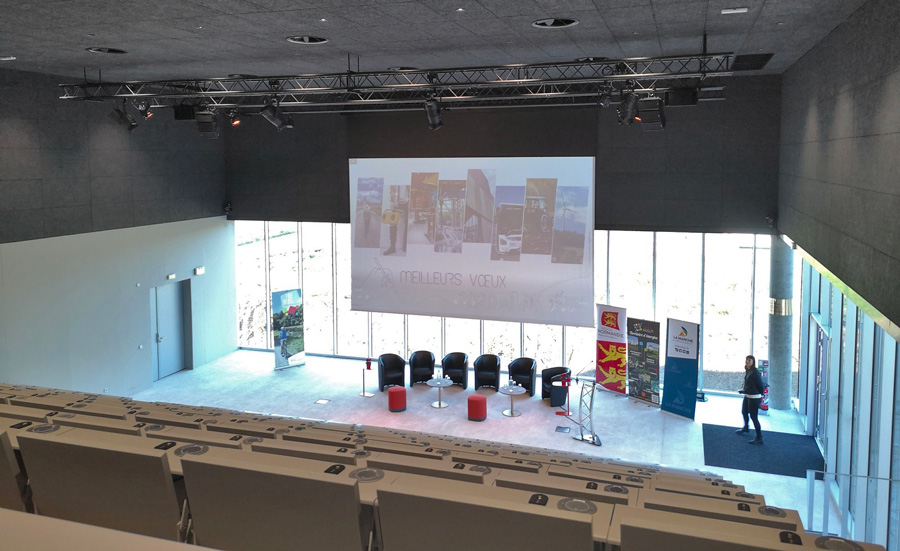 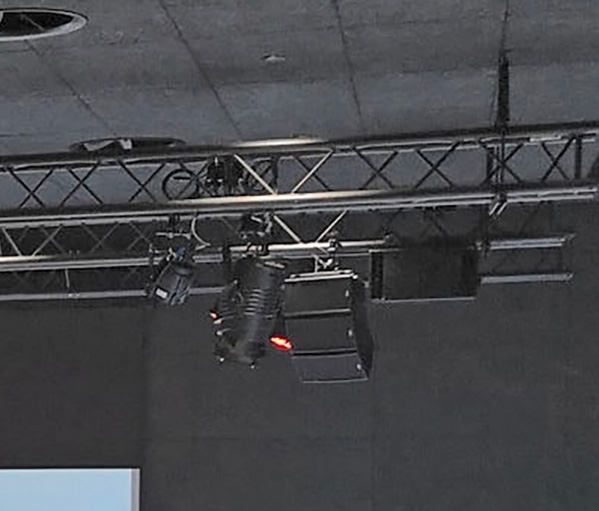 A closer view of the Technopôle’s three GEO M620 and hanged on the right, one ID Series sub to provide some low extension to the short M6 arrays.

In Saint-Lô, the new Maison du Technopôle boasts a fabulous modern design, housing 1,700m2 of space for research, start-ups and all kinds of innovators.

The facility also features a 234-seat amphitheatre which has been equipped by Auvisys with a ultra low-profile NEXO line array system.

And closing off an excellent run for the compact M6 line array system, Credit Agricole has opened its new auditorium at its headquarters in Guyancourt.

This is a much larger application of GEO M6, designed and installed by Novelty, together with NEXO’s ES Division engineers.

“This application is mainly for conferences, although they will sometimes feature a small band,” explains NEXO’s Christophe Girres.

“There are two clusters, each with four modules of GEO M620 cabinets, and augmented by two L15 subwoofers on the stage. 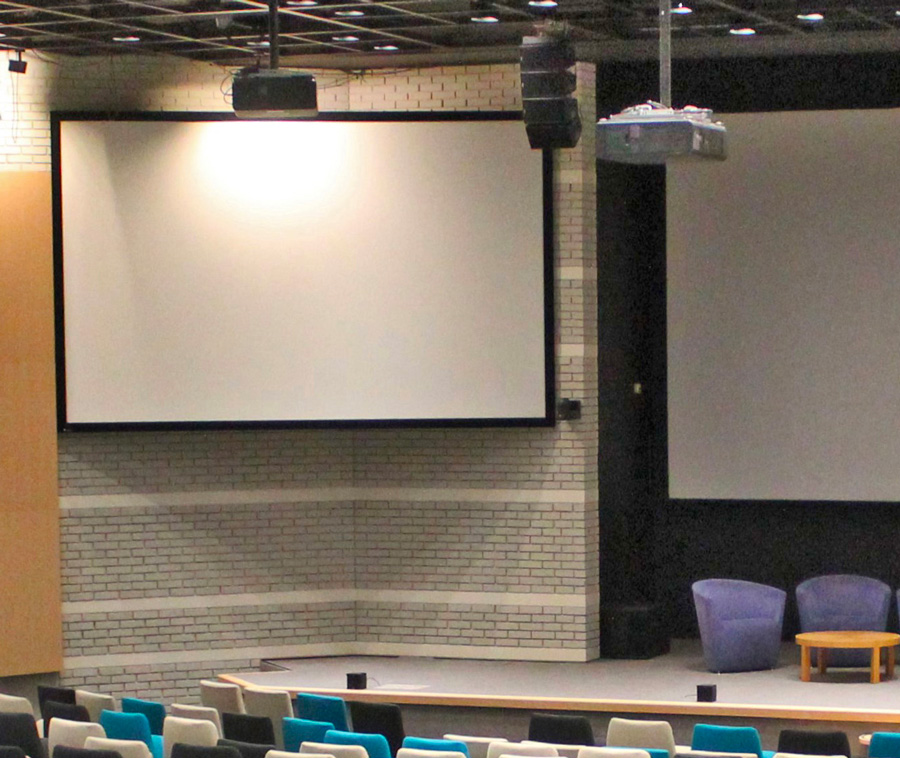 The stage right with four M620 and, resting on the stage close to the brick wall, one of the two L15 subs. Easy to spot on the edge of the stage, two out of four ID14, very handy little boxes for front fills.

We’ve also used of our new super-compact ID14 speakers, with 100°x100° dispersion, for frontfills. The entire system is powered by one NXAMP4x1Mk2 and a DTDAMP 4x 0.7.

The sound is clear and well-balanced, and there is more headroom than they will probably need, but the client is totally satisfied with the system.”