With the world-famous Glastonbury Festival cancelled for a second year, an online celebration – Live at Worthy Farm – was held in its stead on Saturday 22 May 2021.
Filmed over a week and beamed as live around the world, the five-hour virtual festival echoed the glories of the full event missed by so many, in spite of the access problems suffered by the online audience. For many artists it was the first opportunity to play live in a year or more. The event highlight came with a performance from Coldplay, lit by multi award-winning lighting and show designer, Sooner Routhier of Sooner Rae Creative. Routhier incorporated 60 Ayrton Perseo Profile and 36 Ayrton Domino IP65-rated multifunction lighting fixtures, supplied by Neg Earth, into her design to handle the demanding outdoor conditions.
“I needed a large format profile that was IP65 rated because the site was open to the elements in a location that was known for pretty bad weather, so we needed something that was going to last,” she says.

The exposed location saw production designer/creative director, Misty Buckley, and creative director, Phil Harvey, place the band directly in front of the Pyramid Stage on a circular stage surrounded by a sea of light that represented the energy of the missing audience. Behind them, the framework of the famous Pyramid Stage formed an iconic backdrop, its skeletal frame instilling the set with the essence of the Glastonbury spirit.

“We were in a unique situation where the Pyramid was without it skins and crying out to be lit in a way it has never been used before,” says Routhier. “We took advantage of the unique opportunity to hang lights directly on it, outlining the frame with Perseo profiles from ground to apex and across the overhang, and adding a line of Dominos across the floor to create this beautiful triangle of light. The Perseos gave the defining shape of the wider stage and we used the Dominos for punches through the band to make sure there was something in the picture for the low camera angles.

“There were so many beautiful helicopter and drone shots during the broadcast where the entire pyramid of Perseos and Dominos made a really cool triangle of light, emphasising the sacred geometry of Misty’s design. I always light with the camera in mind and the Ayrton fixtures had all the right gobos, including very specific star field gobos I needed to create some nice big moonflower looks. They were bright and punchy with lots of diverse beam options.”

Routhier was assisted by associate lighting designer and design producer, Steve Nolan. “Steve was a life saver,” she states. “It became apparent early on that we would need help with logistics and creative because of the challenges with the sites, time frames, and time zone differences between myself and the UK. It was amazing to have such a kind, creative and diligent collaborator on board!”

“Despite the difficulties of putting a show together from opposite sides of the Atlantic, it couldn’t have a been a nicer, more collaborative experience,” says Nolan. “We found we developed Misty’s ideas with similar solutions, thought processes and choice of fixtures.

The size and weight of Perseo on the Pyramid stage, for example, had obvious advantages during the set up, and we knew that access to them would be difficult once rigged, so we chose a fixture that we knew to be reliable. They are so bright and powerful and looked awesome once rigged. It really did rain for the whole week, but we had no swap outs at all and they all worked perfectly.” 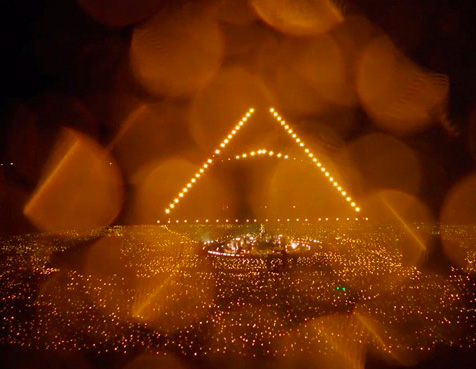 Live at Worthy Farm is not the first time Routhier has used Ayrton, having used ‘plenty of their effects lighting products in the past’, but it is the first time she has used the profiles, Perseo and Domino.

“Ayrton makes amazing lights, their profiles are gorgeous,” she says. “They are nice and bright and have a ton of gobos and features, but the IP65 rating was the decider.

“We were able to line the Pyramid skeleton successfully and leave the lights completely open to the elements which we definitely could not have done if we had used a fixture that was not IP65 rated or needed a dome to protect it.” Routhier was also able to take advantage of some unusual effects afforded by the weather and the durable weatherproof fixtures: “For the song Fix You, we had all the Dominos focused low on the stage in a light amber gobo,” she explains.

“It was raining pretty badly and there were lots of droplets on the camera lens. I loved the look of the beams coming through the band and the rain, hitting the lens, and distorting the image – it was a really stunning effect. We also keyed the band in a really warm tone, shading the levels for the cameras. It gave everyone the ‘fireside glow’ look which was fitting for the outdoor setting at Glastonbury.

“The Ayrton fixtures were great and exactly what I needed for an outdoor festival,” concludes Routhier. “We had torrential rain for most of the week leading up to filming but no failures. The Dominos and Perseos will certainly be on spec for every outdoor show now.”

For more information about Ayrton’s LED lighting fixtures, you can visit www.ayrton.eu