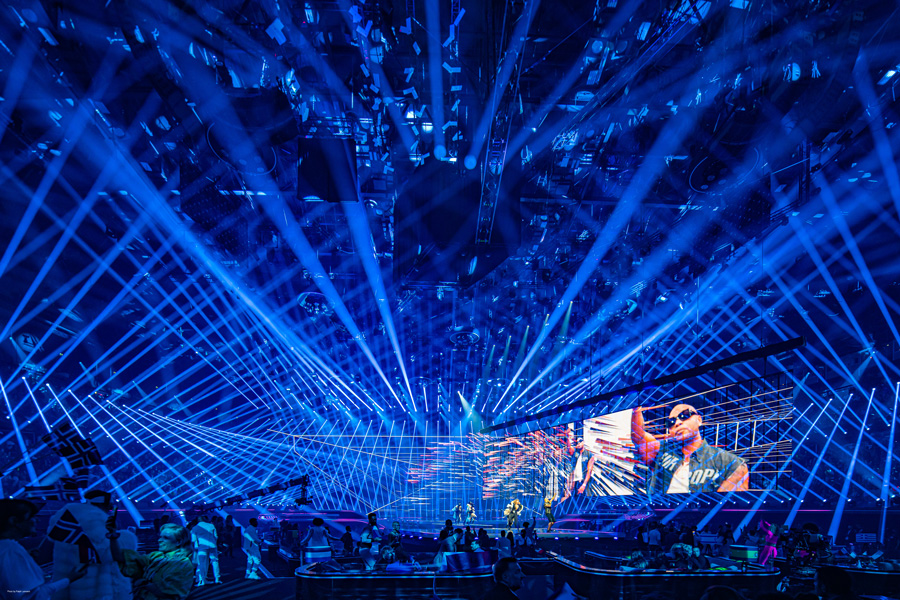 After being cancelled last year due to the coronavirus pandemic, the Eurovision Song Contest returned for 2021 (ESC 2021) with a limited live audience of 3,500 at the Rotterdam Ahoy venue in The Netherlands where Lighting Designer Henk-Jan van Beek deployed almost 500 Claypaky Xtylos fixtures. 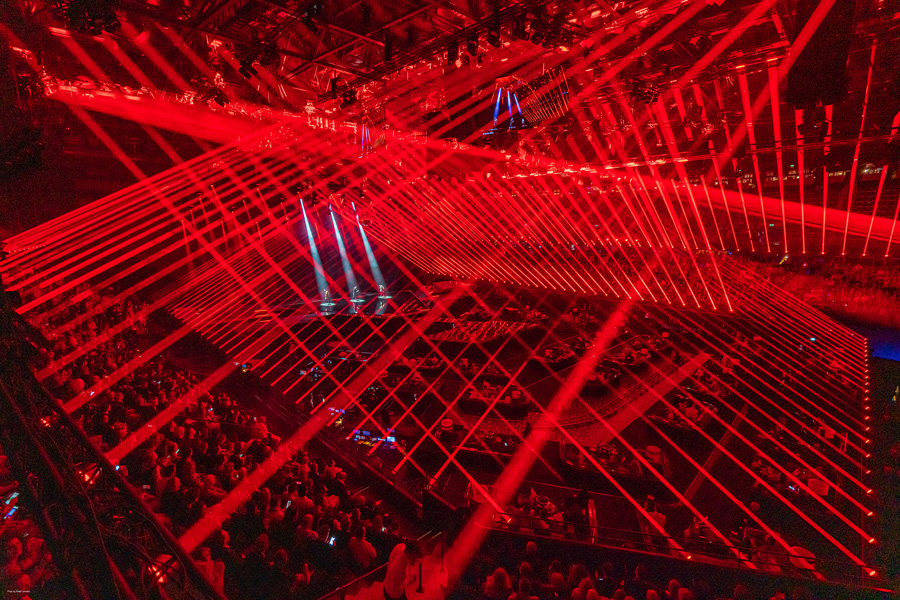 The 65th edition of the popular competition was held May 18, 20 and 22 with 39 countries participating and Italy’s Maneskin winning for the song, “Zitti e buoni.” The ESC 2021 was produced by The Netherlands’ host broadcasters NPO, NOS and AVROTROS on behalf of the European Broadcasting Union (EBU), the world’s leading alliance of public service media. OSRAM, the parent company of Claypaky, was the official lighting partner of the ESC 2021 and, as in past years, contributed to the event by illuminating a key building in the host city of Rotterdam.
Ampco Flashlight in Utrecht, the official technical supplier for the ESC 2021, provided the Claypaky Xtylos, a compact beam moving light with unique optical and chromatic characteristics, making use of a tailor-made RGB laser source. 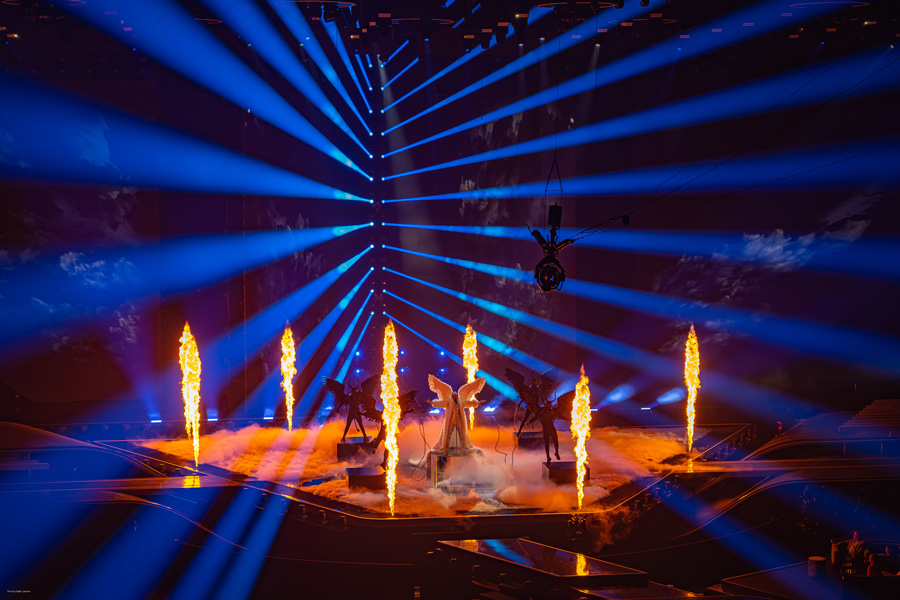 This laser source, lasting for 20,000 hours, is the powerful engine of an incredible array of colors: In contrast to the subtractive mixing used with discharge lamps, colored light beams are extremely bright. The beam aperture can be steered in the range of 1°-7°.

Lighting Designer van Beek of Light-H-Art in Ermelo, built on Production Designer Florian Wieder’s set design inspired by the flat Dutch landscape and its low horizons, with long, low parallel lines, a perfect match for Xtylos and the very long parallel lines it can project with its laser engine.

“The first draft of the set design was very open with no visible fixtures,” recalls van Beek. “This was also a design with fewer types of fixtures than in the past. So, a combination of the lines and strong fixtures was the idea for the show’s semi-finals and final.” 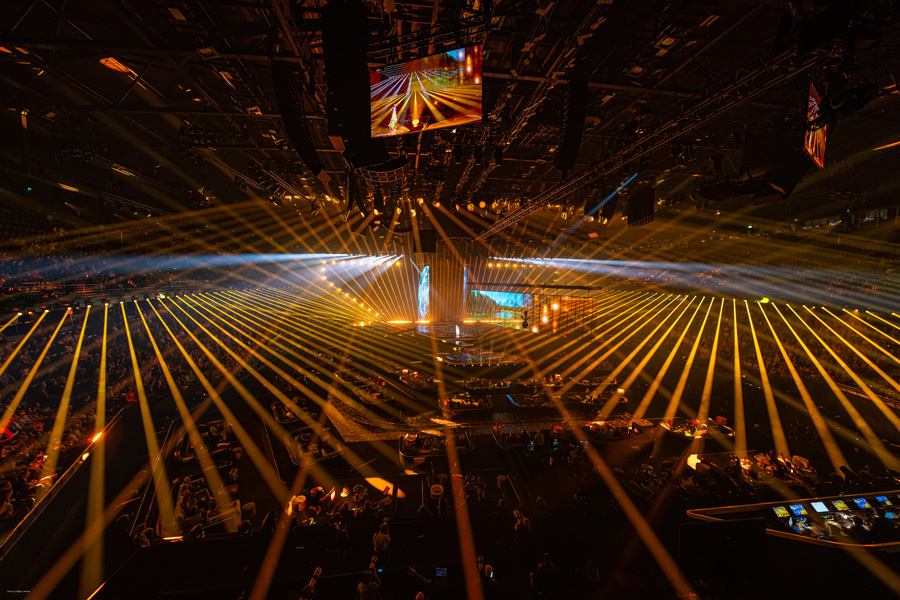 Van Beek took the line concept 360° with extra lines on the stage side. The Xtylos were placed on three levels – ground, second bleachers and top – to deliver three layers of creative beams and the horizon in the skies. “The advantage of using 481 Xtylos was that we could do a lot of different looks,” he says. “There were 39 different set ups, and a range of looks was required depending on the song.
Xtylos could be very big and grand and also intimate. The main advantage was the punch of the fixture. And we still had the narrow beam with powerful color loops – perfect for outdoors and big venues.”

“Set design for Eurovision has always been big and bold and perhaps too elaborate and busy at times,” notes Eurovision Head of Production Erwin Rintjema, who is Managing Director of Sightline Productions in Utrecht.

“Florian really understood the open and clean look we were talking about: a stage that appears very simple but when you look closely there is so much more,” including an LED videoscreen with revolving doors and 160 axles of motion. 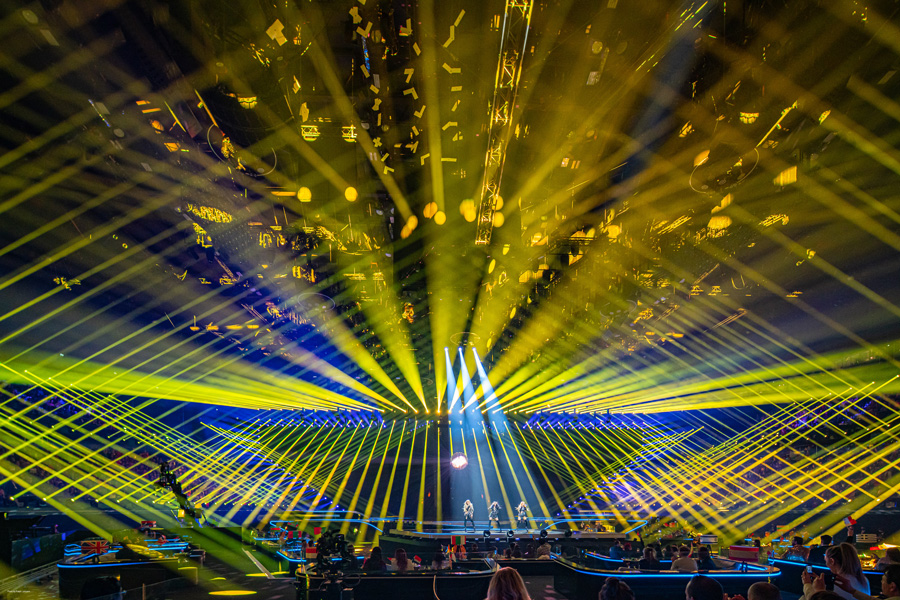 Rintjema points out that the team was “lucky to get so many Xtylos, which gave us the lines we needed and could be used for so many looks. The lights worked amazingly – such a sharp beam, very strong: a Sharpy on steroids! And the speed of the movements really impressed us. Xtylos really pushed the boundaries.”

“It was very rewarding to do the show after having to wait a year,” reports Dennis van der Haagen, Director of Ampco Flashlight, which has enjoyed a three-decade relationship with Claypaky products. “The Xtylos were key for the show; they really stood out and grabbed everyone’s attention. Xtylos are a brilliant unit, and Claypaky made them happen for us. We were very pleased with Claypaky’s proactive attitude toward this project.” 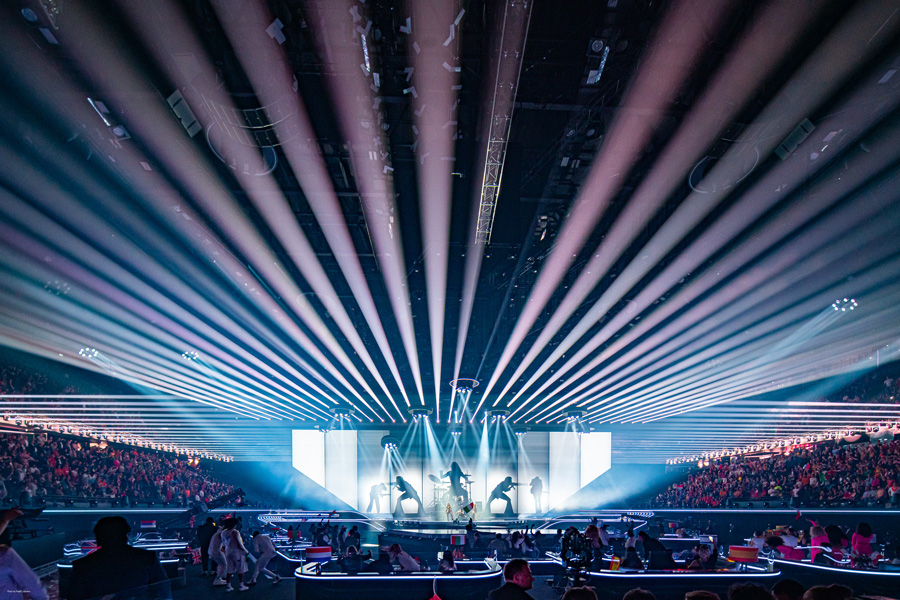 “I’m extremely proud that one of the most important events in the world used our Xtylos in such a significant way. The Xtylos is one of our latest and most innovative fixtures on the market: it is the first moving head light powered by a laser light source” says Marcus Graser, CEO of Claypaky “and this opens new, surprising prospects for the development of the entire entertainment lighting world.”

For more information about Claypaky and their products line, you can visit : www.claypaky.com