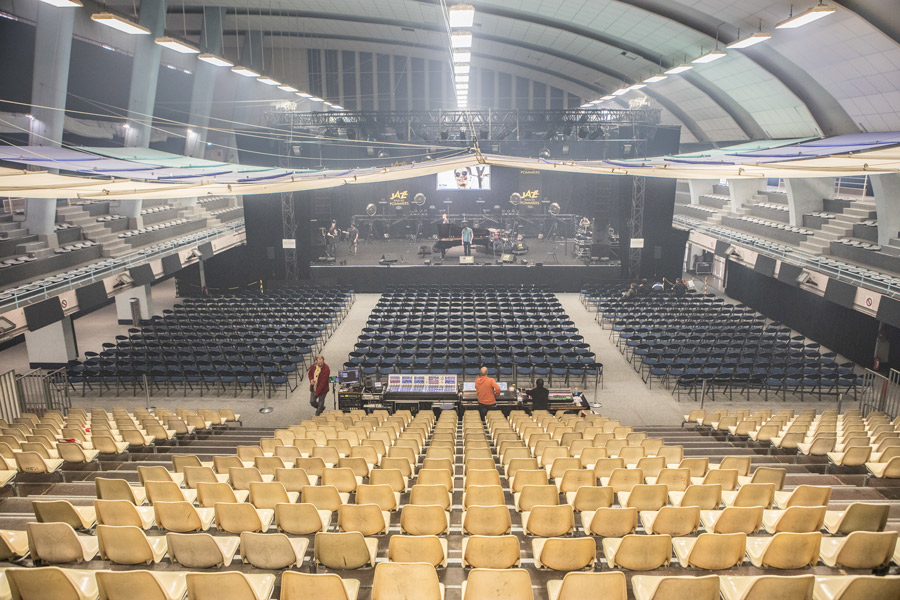 The Marcel-Hélie hall, as seen from the top of the bleachers, the FOH is down at first row. You can see the 2-color tulle ceiling, the acoustic dampening and the absorbing panels down the sides’ bleachers.

Long-lasting jazz festival institution able to gather the biggest names in Coutances, Normandy, Jazz sous les Pommiers has received this year one of the first big Nexo M12 systems. SoundLightUp went there for an in-depth interview of sound and acoustics maestro Jean-Marie Roussel. 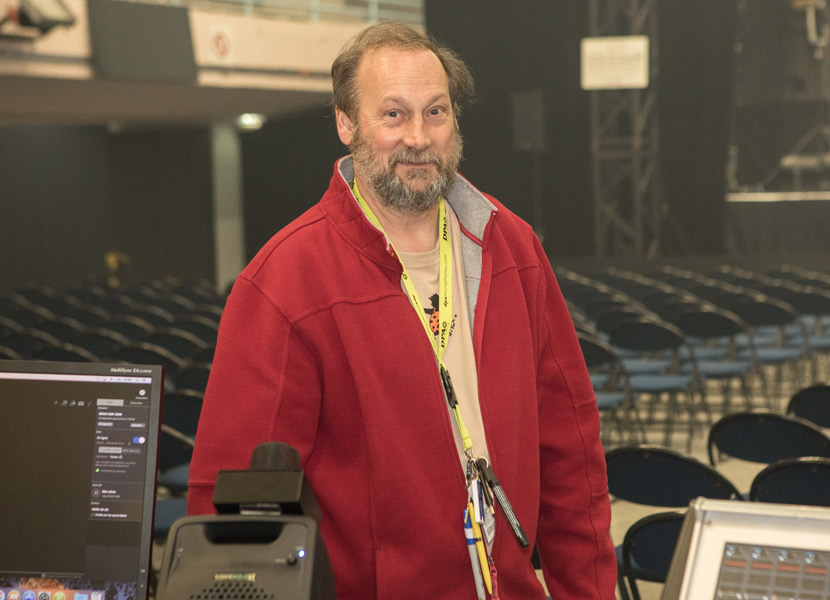 Jean-Marie Roussel, on one of the very few occasions he could actually pose for a SoundLightUp photo… we did take him by surprise.

When the spring burns with the desire to dress in summer fashion and colors and swing a little, Coutances in Normandy metamorphoses and lives jazz music in every corner of its city. A true common passion.
We decided to meet Jean-Marie Roussel, essential player and technical support of this festival, to discover it and the city / festival and incidentally listen to good FOH mixes. Bet is won all the way!

Since we’re introducing Jean-Marie Roussel to you fellow international readers, you have to know that his spectrum is more than broad. Jean-Marie is a shareholder of the Atech / Atl company, which is the Norman vendor of the festival. He is also a partner of Auvisys, which is active in France and abroad in distribution of Pro audio, lighting, video and events’ automation, for institutional markets, but also for broadcast. Last but not least, JM Roussel it imports solutions for insulation and acoustic treatment, plus all the necessary measurement and analysis tools that go with this stuff. Suffice to say that this guy is the reassuring kind!

Eight M12, cabled here in passive mode behind some NXAMP4X4s.

SLU: The Marcel-Hélie hall seems pretty versatile, and includes here quite a number of acoustics solutions to improve its listening rendering.

Jean-Marie Roussel: Very, very versatile. It welcomes, in addition to this Jazz Festival, the indoor market of Coutances, sport events, or exhibitions.
I made measurements and specified membranes which were made by the city technical crew and are installed throughout the entire festival on all its walls.
I also specified lateral panels of Melamine foam, leg drops of heavy drape, and a long tulle ceiling for decoration, but also to dampen the high frequencies generated by the reflections on the concrete walls.

The acoustic treatment of the live venues becomes a very important market (and that is understandable, why stack loudspeakers to get a lousy result? Ed.). For example I did the treatment of the Marciac Jazz Festival marquee, another one for the Epau classical music festival in Le Mans. It’s useless to have super cars on a bumpy road (laughs). 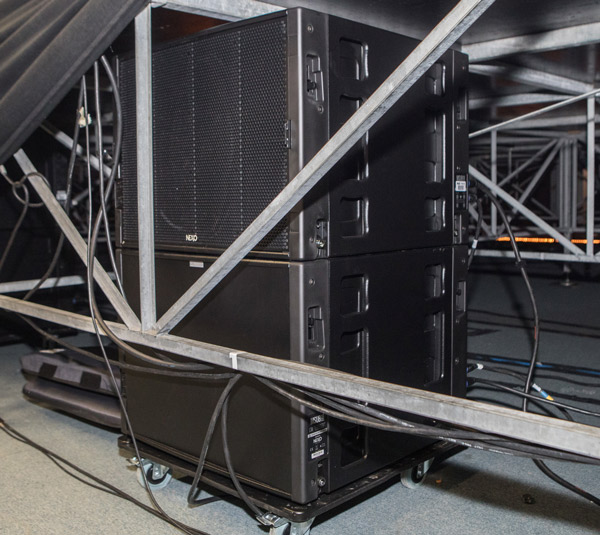 One of the four cardioid M-SUB18 stacks hidden underneath the stage.

SLU: So, what’s the relation between Nexo and the “Pommiers” festival?

Jean-Marie Roussel: It’s an old story. I know the Nexo teams since very long, and I even worked as a subcontractor for them. It’s very good and affordable equipment. I have installed some in Africa and it is still doing well after all these years. The new M range is really good and the M12 is perfect for this hall. (He rides up a fader and the voice of Cecile McLorin Salvant warming her voice resonates, pure and crystalline). We have 8 M12 per side, 8 M-SUB18 in cardioid set-up and small bow under the stage. 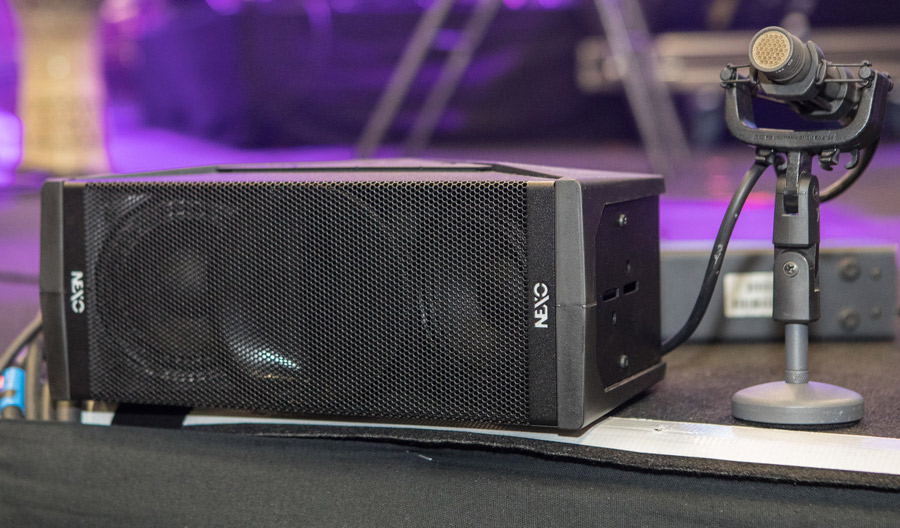 One of the iD24s, the nifty versatile Nexo units, perfect to discreetly fill the first ranks of the audience.

I tighten it deliberately because I have to be careful not to make the hall resonate by its sides, otherwise it does go booming in the low frequencies.
There are also four iD24s as lip fills and a pair of Nexo PS to precise the sound for the first rows on the sides.

We let Jean-Marie completing his FOH rehearsal adjustments because he’s at the helm of the house mixing board, a venerable, still standin’, good ol’ Soundcraft Vi6, and it does sound like he knows where it’s at. I have a walk through the empty hall with fully-fledged deployed bleachers in the rear part, and it proves the merits of the treatment work up there. 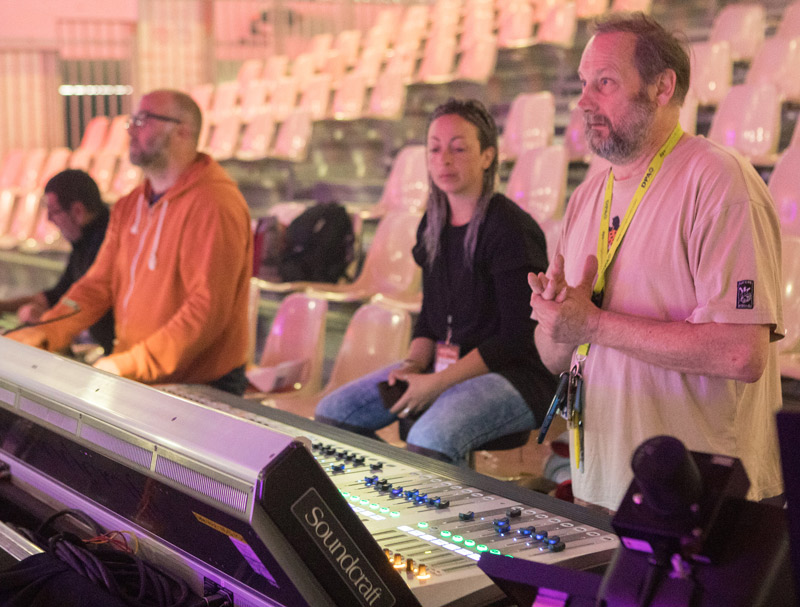 Jean-Marie at the helm behind his SoundCraft Vi6 complemented by nice analog and digital peripherals galore.

The reverberation time if acceptable and you obtain a convincing rendering everywhere, including in the rear part of the venue, a mere 40 meters away from the PA system. Only the three last upper rows between the tulle ceiling and the target of the first M12 on top sound a bit dull and lack a bit of SPL, and some rows in the middle of the bleachers enjoy some dBs of extra low-mid. Were the system cabled in active mode, it would have been easier to smooth it all.

Nevertheless, when near FOH and our back turned to the first bleachers’ rows, one can appreciate the very nice phase rendering of the M12 and the quality of the Nexo waveguides, with tight mono recomposition. The M series might be positioned in an affordable segment of Nexo’s offering, no saving was made on the choice of the transducers, as Joseph Carcopino, the head of R&D in Plailly, hometown of Nexo, explained us recently. And you sure can hear it. 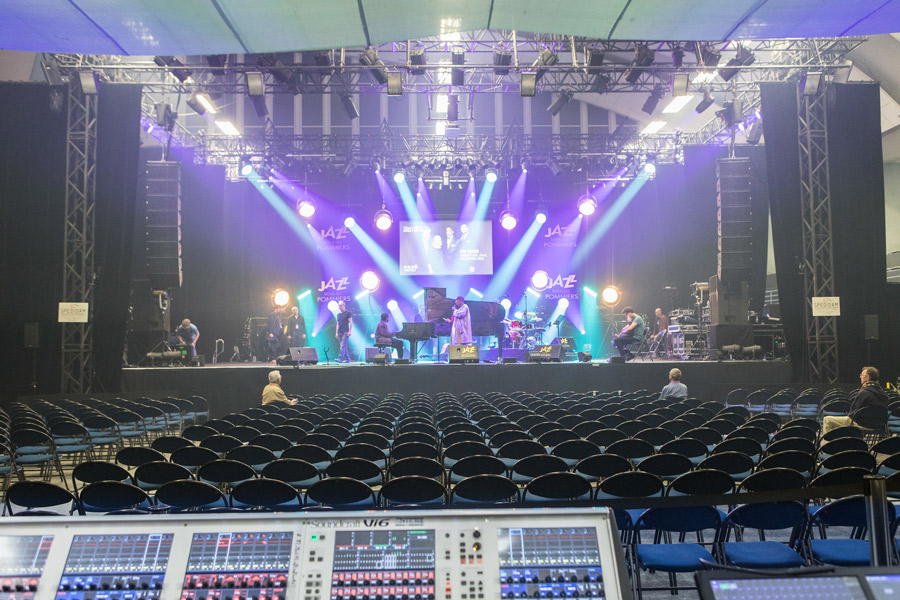 Cécile McLorin Salvant during rehearsal. A treat for the ears.

The extremely natural and respectful FOH mix from Jean-Marie unveils the natural rendering of these boxes. The treble is lovingly soft and fine, the medium is precise and present but without being agressive in any case. The lows are more discreet, but as we’re listening to a piano & voice set rehaersing with subtleness, this impression is quite inevitable. 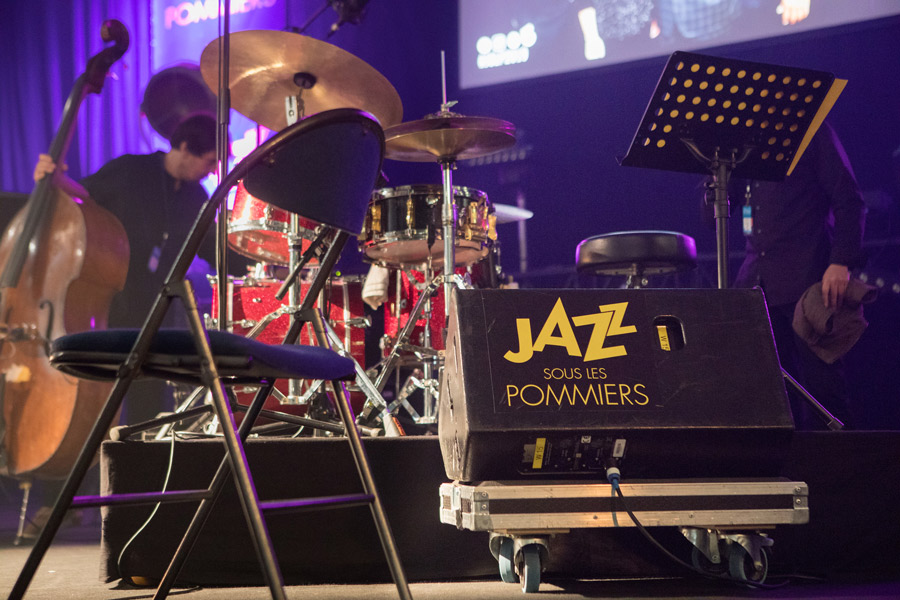 Why hurting your back when you can actually roll’em in? ;0)

We will have the opportunity to get more bass some hours later with the beautiful set of saxophonist Sophie Alour, backed on this occasion by high class guests including Mohamed Abozekry playing oud, and then an Electro Deluxe set that closed the day with their legendary punch, all in this same hall.

Hats off to the technical teams coming in with total zen approach and attitude, and great kindness to achieve four rehearsals and sets in total smoothness for 4 different artists, and the local and national media crews and inevitable requests. Of course we’re far away from the festival’s beginnings, and a dinner beside Jean-Marie in the middle of the techies and artists gossiping about the former editions can testify this, in Coutances they know how to mix pleasure and discipline. 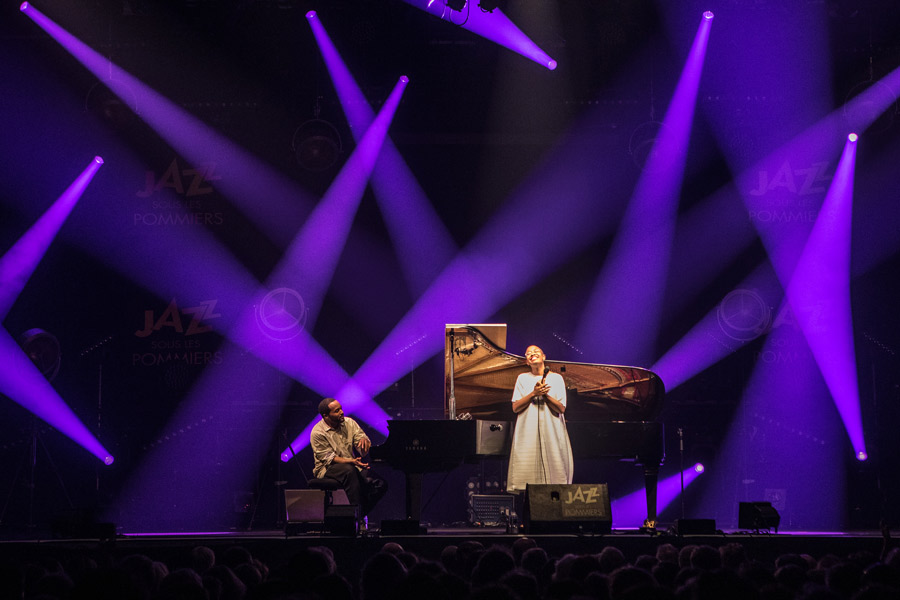 Cécile McLorin Salvant, a show all in subtlety and in complicity with the audience.

The audience enters the hall for this evening’s concerts, a demanding and connoisseur public who evolves, according to artists and tastes, Coutances now burst of a thousand performances during eight days, with plenty of choice. 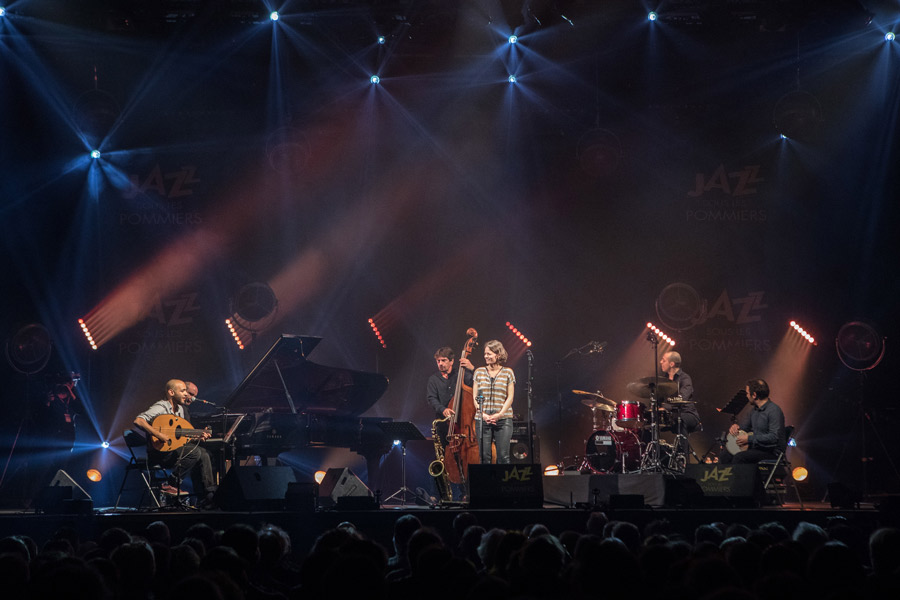 Sophie Alour shares the stage with Mohamed Abozekry for a very classy, yet unclassifiable moment, the true definition of Jazz with a big J.

Jean-Marie stays on course and gives us a neat 83 dB(A) and 3-4 dB more in dB(C), without any frustration with a precise low spectrum. The last numbers will reach 87 dB(A), showing the capacities of the M units at low level.
Some hours later, the strategy of the FOH guy of E2Lux, on the opposite, will be to tease 102 dB(A) et mask the low resonances by the SPL generated by the M12s and the M-SUB18s.
It all goes smoothly with a well filled and fat medium, still very enjoyable highs and a real “concert” bass even if slightly restrained, proving that a 12” can hit as well as a pair of 10″ and go down a bit lower. 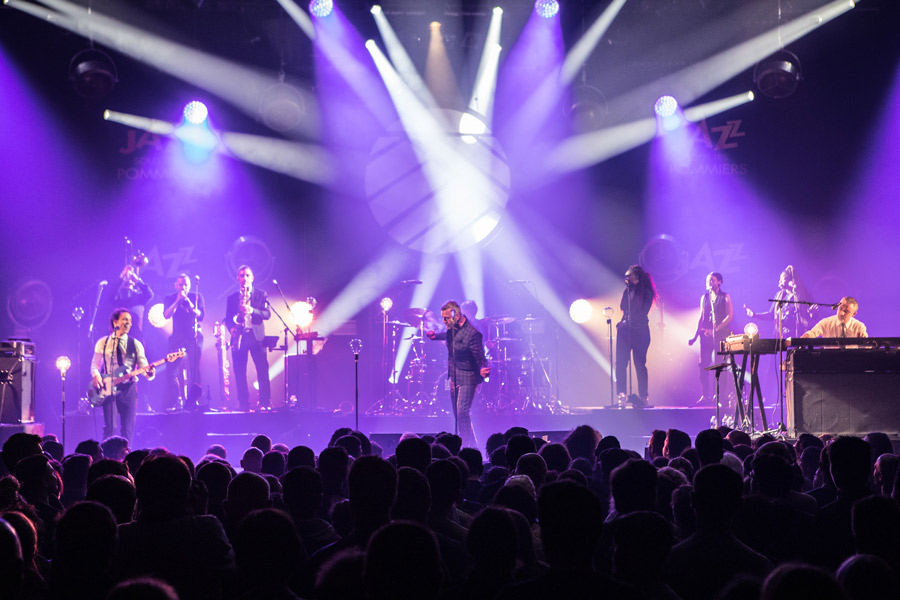 Electro Deluxe without Thomas Faure and its others “usual” horns, but with enough energy to make apples fall off the “Pommiers”. 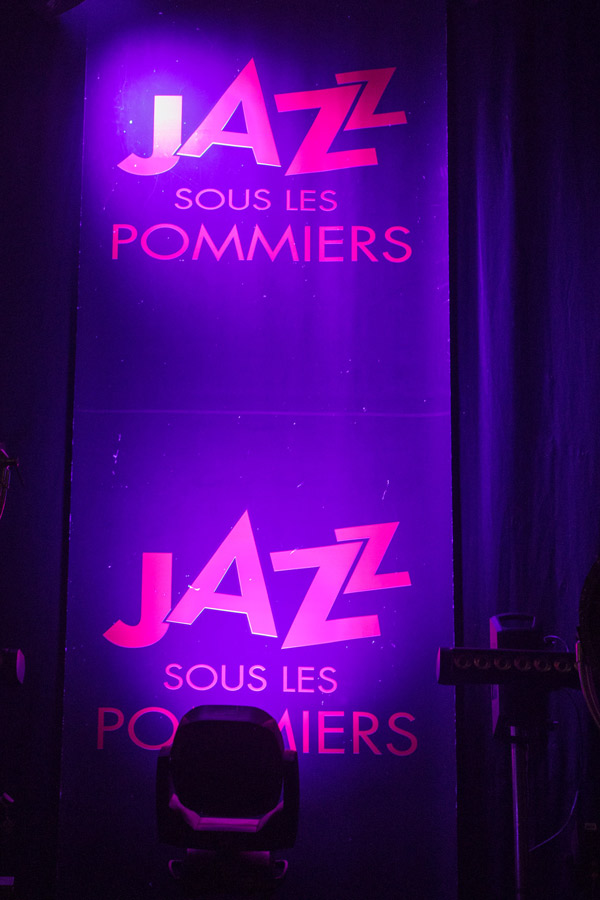 The neutrality of this M12 box is not about its versatility. Confronted with sweetness it knows how to be cuddly and throw far, whereas facing a very dense and well compressed mix, it responds present and does not appear reaching the end of its potential, despite the reasonable number deployed in this not that small venue here, while working in passive mode only. It is true that there are 4X4s amps connected behind, the kind of processed amp that is difficult to take in default when it is necessary to deliver.