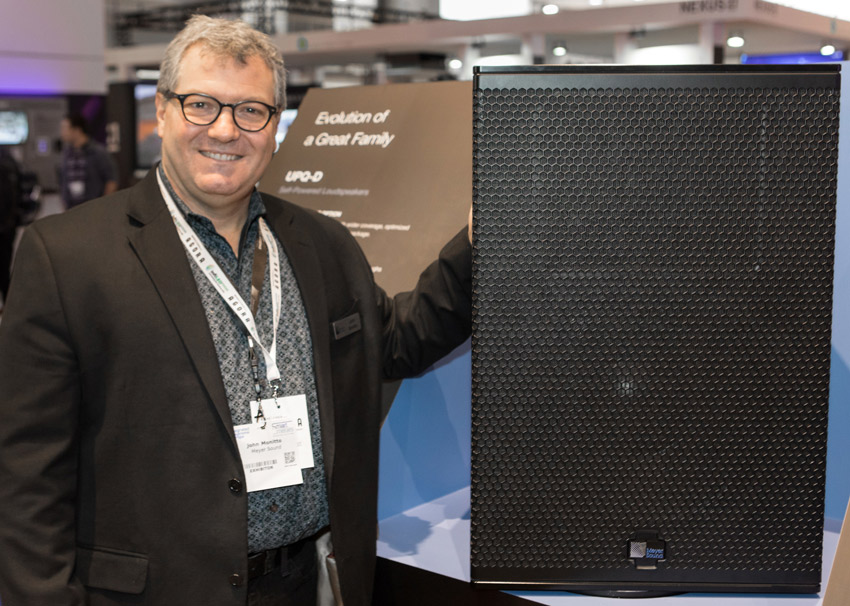 There we go! Even though the hair gets whiter and rare on the company founders’heads, the ideas budge and the future is nowadays knocking on Meyersound’s door.
Two models were launched at ISE Amsterdam, and will be fully available in some months, the ULTRA-X40 and the UPQ, now called the UPQ-Dx. D stands for Digital, thanks!

We don’t assert that Meyer has denied the future and the digital, but he has confined them during a long time down to earth into his processors, with good old AB/H class for wooden enclosures, big toroidal trannies and their top-notch condensers, and analog filters and protections. It’s all over now, and you’ll quickly understand that we’re far from over with the bearded Berkeley tribe!

We benefited from the presence of John Monitto on the Meyer stand, a Meyer old timer now Business Development and Sales Manager Director, and questioned him about these two newbies, and of course did the « what’s cookin’ Doc ? » routine to the R&D guys. Hurrah, we got a little bit more than a smile ;0) 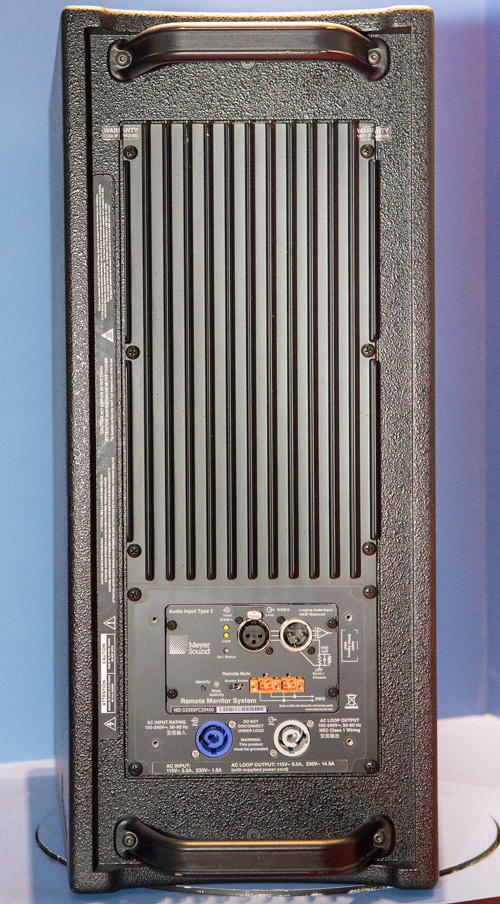 The rear plate of the ULTRA-40X, the heatsink is long but hardly embossed, this shows the number of calories to dissipate has gone down in Meyer products also.

SLU : What’s really new inside the ULTRA-X40 electronics? We still see the good old analog inputs on the rear plate…

John Monitto : Most of our new products, the 750-LFC, the Lina, the Leopard, the 900-LFC, comprise D-Class amplifier modules.
This simplifies the amps and make them more lightweight, and we can obtain impressive peaks and massive continuous power without excessive heat.
This reduces electrical consumption, increases the efficiency, and mostly the standby current is extremely reduced which is necessary to avoid energy waste.

Our customers also congratulated us for the quality of the sound, while others asked us to build new models, or at least, to bring this new technology also to the Point Source ranges; there I think in particular of the Broadway sound designers.

SLU : How come you’re turning that strong to digital, whereas for the LEO-M launch, you only swore by analog in your models? Apart from the Mina…

John Monitto : That’s true regarding the Mina (smile) and the MM-4. This model was our first D-Class amplifier, even before the Mina.

SLU : But the Digital is everywhere now. LYON has a little bit of Galileo instead of the analog filters and protections of the LEO…

John Monitto : This is true as well. We did it! (laughs)

SLU : Do the D-Class amplifiers come from your own R&D, are they manufactured by you, for you, or just taken from one’s shelf?

John Monitto : No, we don’t buy them from a third party, they come from our own R&D dept. and built specifically for us. We made a great deal of work with a brilliant team who’s now working to fit each new product with this technology. This hard work is now rewarded, as this loudspeaker is now very popular on the market, and I’m talking about the Leopard. 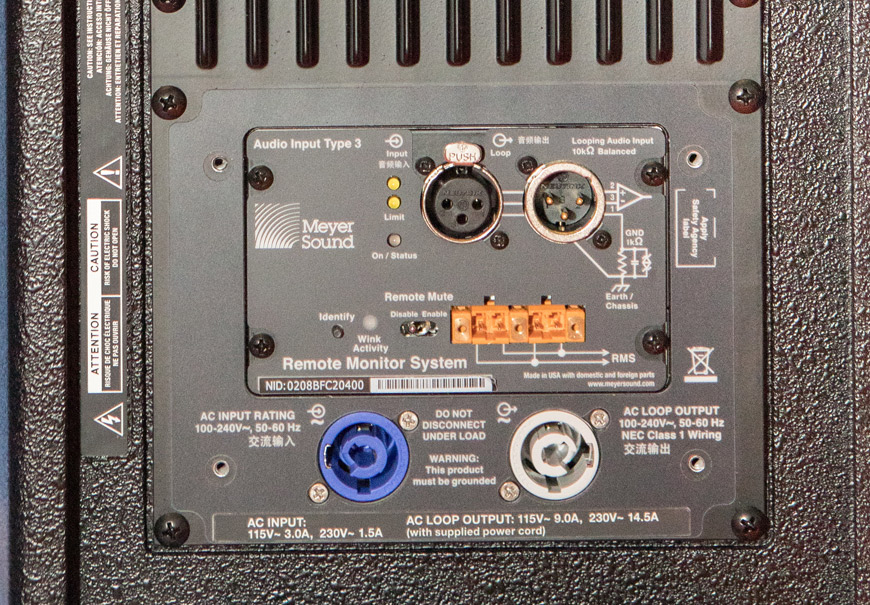 A close view of the rear plate of the ULTRA-X40 and its analog input and thru connector to cascade other units. Don’t you dream of unscrewing it and replacing it with the “DATA” stamped 2-XLR model?

SLU : But how come, as you’re ahead of the competition with AVB, and you have Class-D amp and digital processing, you don’t offer an AVB input as well on the rear plate of your models? Now you can.

John Monitto : This is a great question (smile), why not… And maybe we’ll do, that’s all I can say. Do we have this kind of product right now, answer is no, do we have the ressources to do it, the answer is yes. Are we gonna do?

SLU : But, as you’re listening to the market, if it ever asks for… (laughs)

John Monitto : We have to be careful with digital inputs on active speakers, as the latency has to be the same on every unit, hasn’t it? The AVB and the Milan are synchronous networks, so no reason why it shouldn’t work. (laughs) 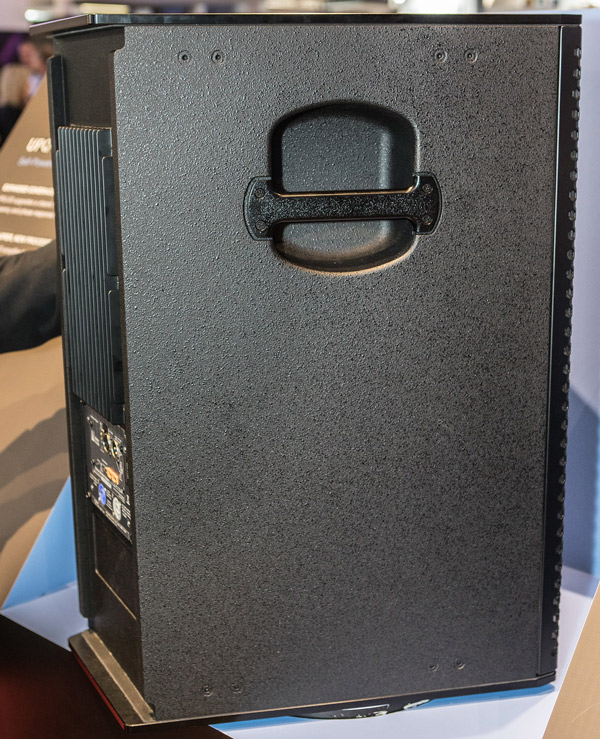 The UPQ-D1 with its two top/bottom aluminium plates for hanging purposes. The new flat driver takes place, as requested, on the back plate. The dimensions are the same as the old model.

John Monitto : Here, we have the UPQ-D. It is an UPQ where the amplifier module has been changed into Class-D from now on, and the processing, filtering, EQ, protection and phase control are all now digital. This new module provides 6.5 kg less weight.

Another news, the UPQ will be available in three versions, and not only in two versions as before.
This means we’ll get a version of 80° x 50° UPQ-D1, the 50° x 50° UPQ-D2, and a brand new 80° x 80° model named UPQ-D3, ready to seduce theatres asking for this type of model (very close to the good old coaxial models very popular in french theatres… – Editor’s note).
Nothing changes much in external size and hanging points, which allows existing users to keep the same inventory of accessories. The transducers are the same, with the Neodymium 15” and the 4” driver, all manufactured in Berkeley by Meyer.

The new 2-channel amplifier delivers 1,800 watts peak. The new digital processor improves the frequency response, now 53 Hz to 19 kHz with ±45° phase between 80 Hz and 18 kHz.
The Max SPL measured in free-field at 4 meters (recalculated at 1 meter) with our M-Noise(read here to know it all about the M-Noise) reaches 133 dB.

We have to specify that the size difference between the modules and the differences between the enclosures make it impossible to equip old loudspeaker models with new amp modules. These three new models will be available at the beginning of summer, with a price more competitive than the old models, and will be compatible once latency duly adjusted. 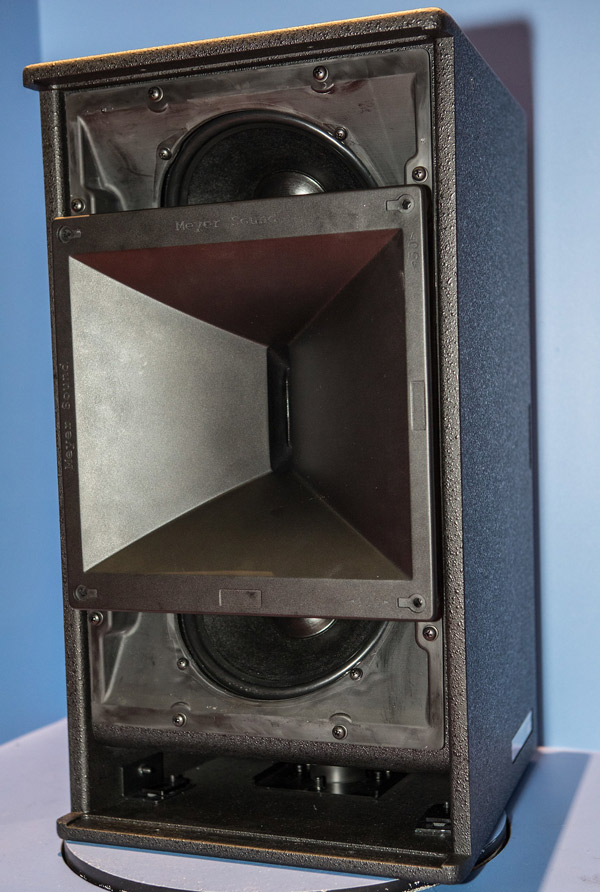 The ULTRA-X40 without its front grille. Note the slightly asymmetrical assembly of the 3 transducers, for more space for the unique port. Two engraved figures tell the horn diffusing angle and its orientation. Here, 110° horizontal x 50° vertical.

SLU : Where does the ULTRA-X40 design come from?

John Monitto : From the Lina, with concentric mounting, here it is Point Source with specific waveguide, 100° x 50° or 60° x 50° in a second model, 1/4 turn rotatable. It is impossible to go beyond, otherwise the cables would mess up (smile).

SLU : This is a new type of Point Source model issued from a Line Array, we’ve seen it from other manufacturers, but not from you…

John Monitto : That’s true, but there are a lot of advantages and we hope to have the same success with this model than we had with the former UPA-1P. 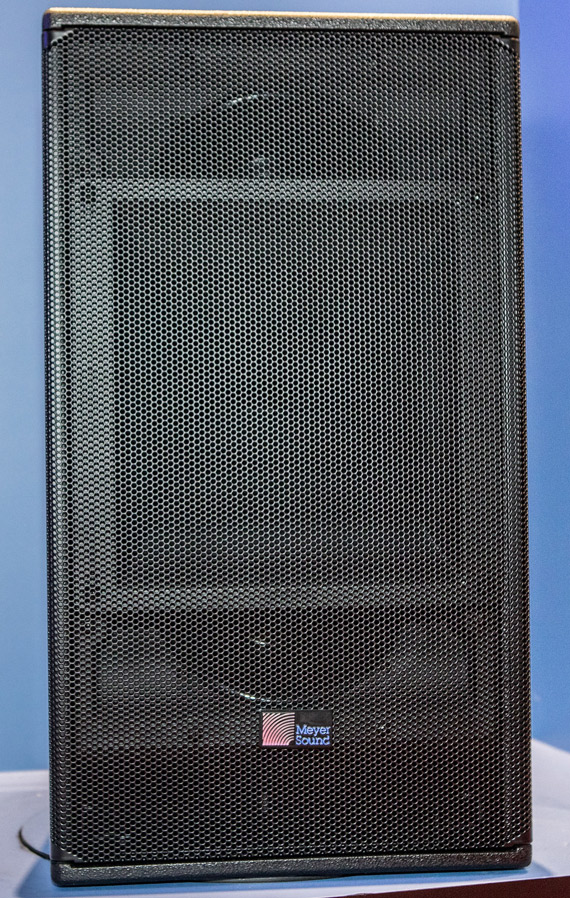 This loudspeaker comprises two Neodymium and has two 8” transducers and a 3” driver with constant directivity waveguide. They’re all driven by three distinct amplifiers delivering 1.950 W Peak (apparently the same as in the Lina – Ed.). The frequency response is 60 Hz to 18 kH, and with M-Noise we reach a Max SPL of 130.5 dB.
Thanks to the enclosed digital processor alongside the amps, the phase stays between the limits of ±45° from 100 Hz to 16 kHz. The weight doesn’t exceed 25 kg! (smile). There are a lot of hanging points for fixed installation or a handle for the mobile version, all this will be available at the same time than other specific accessories, with the first models beginning of summer.

SLU : So there will be two directivities?

The rear plate of the MPS-482HP, delivering much more info than the front plate with only a handful of LED indicators!

It will complement the 8-channel MPS-488HP when you don’t have that many 48 V/balanced analog loudspeakers.

Of course we’ll make the seat of our local Meyer distributor to get a chance to listen to these new units, once available, and then let you know, dear readers, our most complete impressions.