Since June 26, visitors of the Futuroscope park can admire La Clé des Songes (The Key to Dreams), a new night show presented in the park’s water theater. Designed by ECA2, the show provides the public with a dreamlike journey relying on video-projection, lasers, flames, and water jets. The immersive show is based on 10 x video-projectors, and 3 x Modulo Kinetic media servers by Modulo Pi. The Key to Dreams is the result of a year and a half collaboration between the Futuroscope park and ECA2, a world leader in the design and production of immersive multimedia spectaculars. Established in the park’s outdoor water theater, the show offers a multi-sensory experience where animated movie and multimedia blends.

Committed to upgrade the attractions and shows offered to its 2 million visitors every year, the Futuroscope ordered a new spectacular to ECA2 to replace the show previously played in the water theater. Teams of ECA2 had to reclaim the venue and imagine a new show using the equipment already installed. In response to this challenge, ECA2 designed a new scenography around the vortex structure, a preexisting element of 28 tons whose 157 facets form a 270 sqm projection surface. 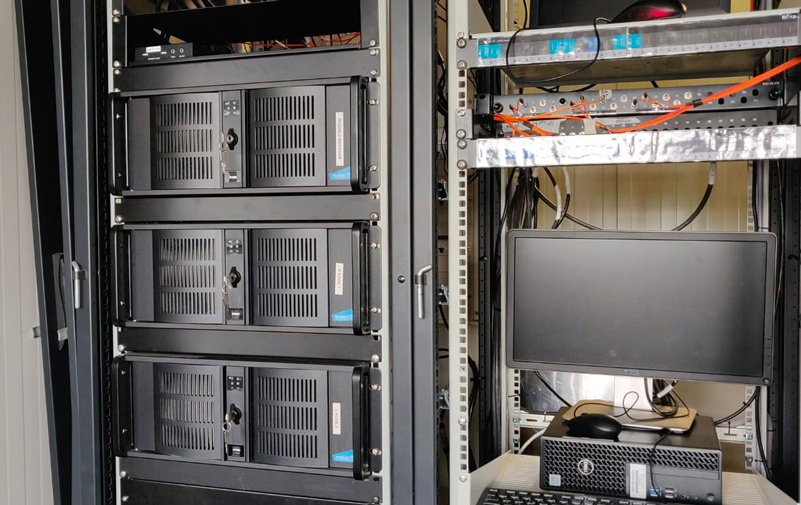 The Modulo Kinetic media servers installed in one of the control rooms of The Key to Dreams.

To magnify the vortex lit up by 5 x Christie LX1500 video-projectors, ECA2 decided to add the Modulo Kinetic media server solution to the equipment already installed. Thus, 1 x Modulo Kinetic Designer workstation was added to the control room, as well as 2 x Kinetic V-Node servers, each equipped with 6 outputs.

Projection study was made in Modulo Kinetic using the dedicated tools available in the software. Thanks to its virtual camera system and 3D calibration of projectors, the media server allowed creating a 3D mapping on the vortex, resulting in an animated fresco with varied atmospheres throughout the show.

In addition to this 270 sqm mapping, the show includes 950 sqm of projection on water screens, and 450 sqm of projection on a net suspended 35m high. These projections are based on 5 x Barco projectors from 18,000 to 44,000 lumens, as well as Modulo Kinetic for the 3D mapping and media playback.
Furthermore, Modulo Kinetic’s LED mapping function allows controlling a constellation of +300 lights spread across the water’s surface. Synced with timecode, the 25-minute show is played twice every night in front of a grandstand of 5,000 seats. In addition, the Futuroscope park uses the Modulo Player media servers by Modulo Pi on several other attractions, including The Time Machine (Awarded at the European Star Awards 2014, and at the Thea Awards 2015) and The Extraordinary Journey (Top European Attraction, Parksmania Awards 2017).

For more information about