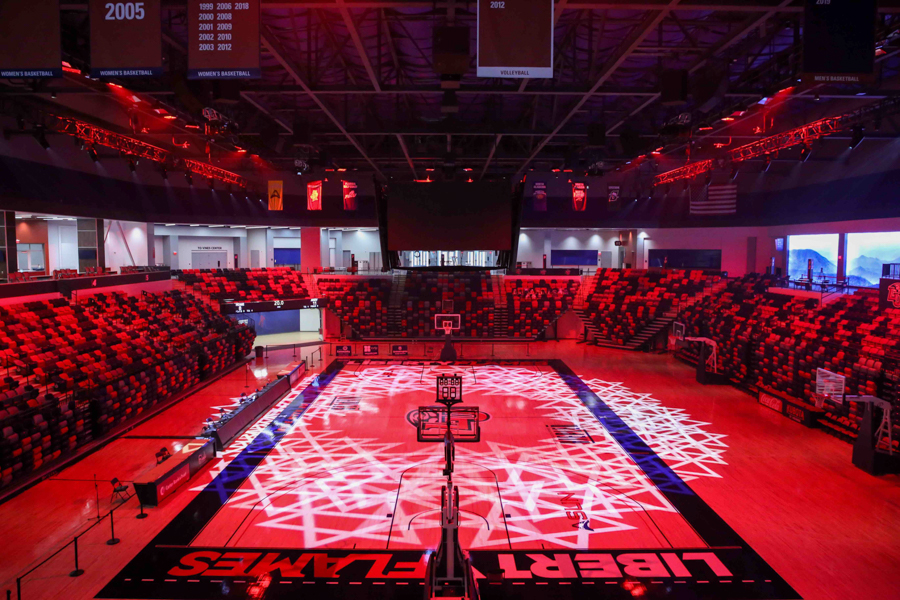 Liberty University has invested in a complement of 20 Ayrton Khamsin-S LED profile luminaires for the new Liberty Arena on the Lynchburg, Virginia campus.
Liberty Arena seats 4,500 spectators and is the home of the university’s men’s and women’s basketball and volleyball teams whose games are broadcast on ESPN+. Liberty University previously purchased Ayrton Mistral fixtures for a multi-use event space, which hosts a wide array of entertainment programs and gatherings. 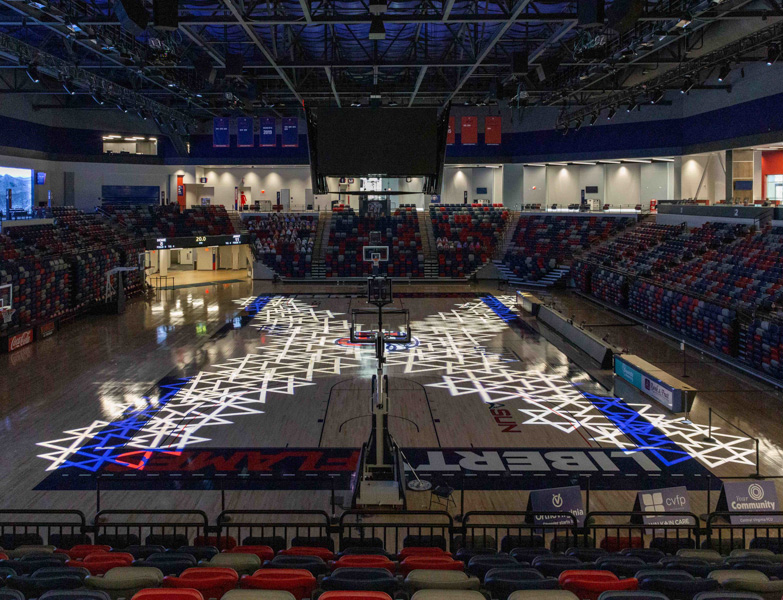 “We wanted bright LED fixtures that would really pop and enhance the fan experience in our new dedicated sports arena,” says Amy Caun, lighting director and Tier 2 production technician in Liberty’s Event Production department.
Designed for scenic applications, the Khamsin-S is equipped with a new LED module delivering powerful metallic white light with a record-breaking output of 40,000 lumens and a colour temperature of 6500 K. 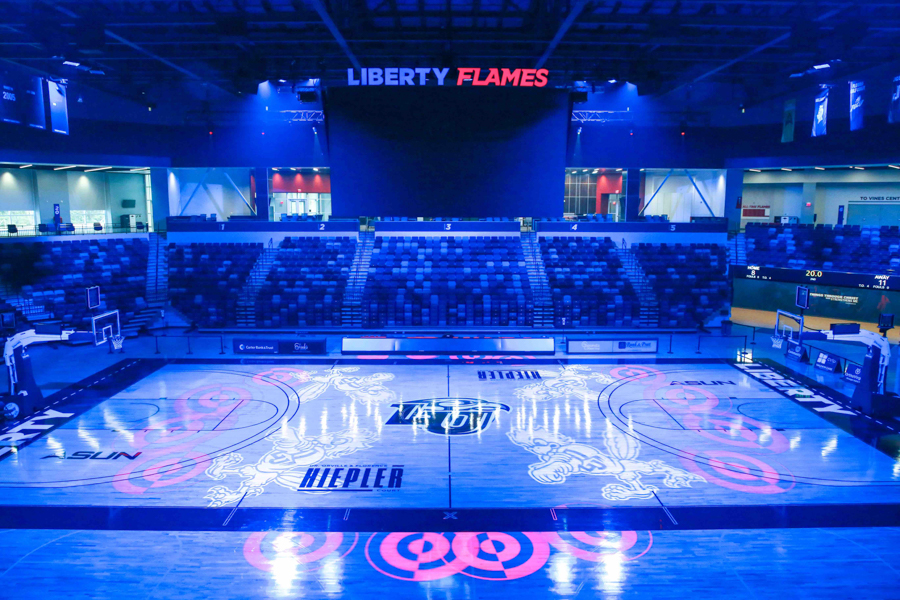 “We like to stay with one product line, and ACT Lighting arranged a shoot-out with Khamsin and another Ayrton fixture,” she explains. “We were really impressed with Khamsin’s design, how sleek and compact it is for such a powerful fixture. Khamsin also had great saturated colours, and, being an LED fixture, we don’t have to worry about lamp life.” 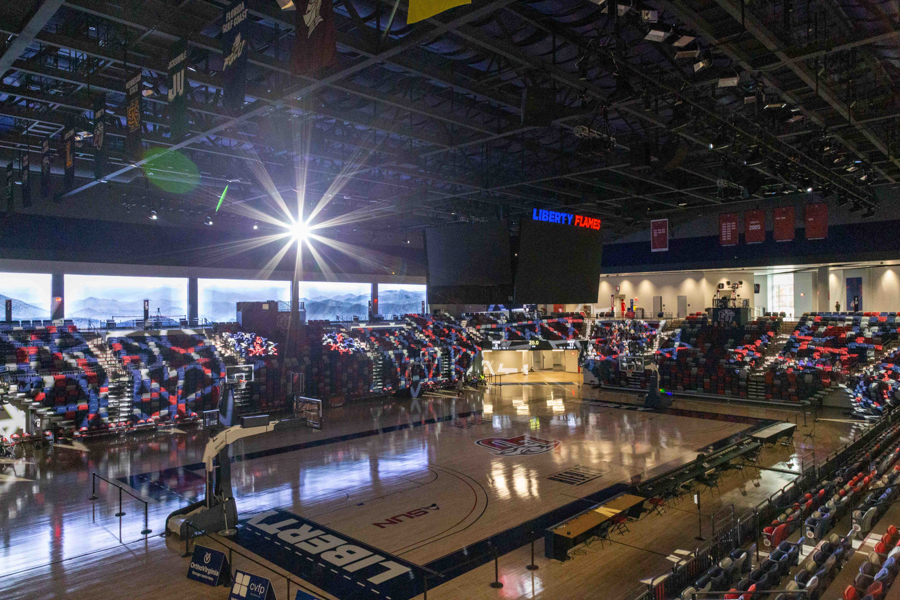 In addition to the Khamsin-S fixtures, the new arena boasts a Daktronics center video board stanchion display, court table and 360 degree video ribbon display plus four 4K laser projectors for court projection, all of which play a role in creating an immersive fan experience. 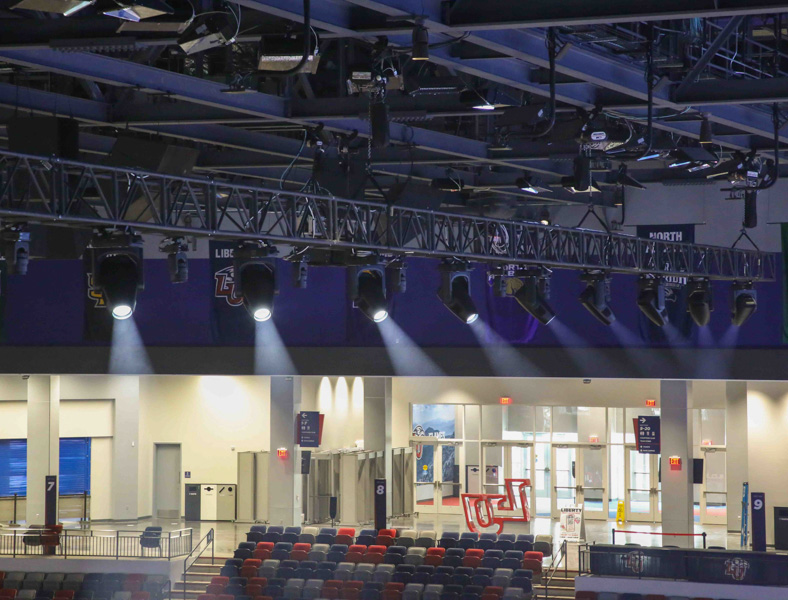 During the starting lineup the Khamsin-S units, which are mounted on truss on either side of the court, illuminate the players and court and build excitement.
Custom gobos featuring the Liberty Flames logo and mascot project onto the court and seating. The Khamsin-S are also deployed going in and out of halftime and for celebratory effects after a win. 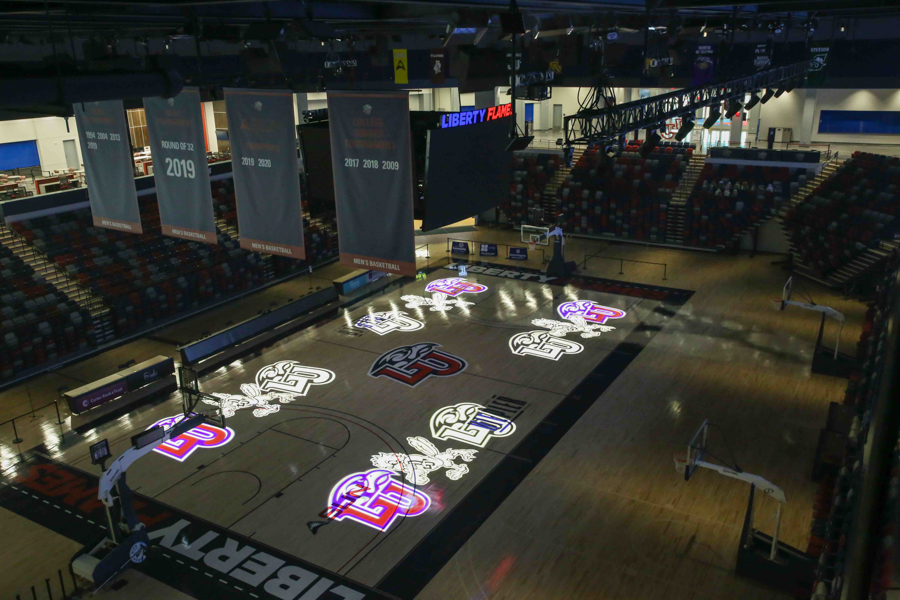 “Although the coronavirus pandemic means there are currently very few fans present during games, that actually has given us time to really dial in the production in the new Arena,” notes Caun.
“Once more fans are able to attend again, we know they’ll enjoy a high-quality, in-person experience and the Khamsin fixtures play an important role in helping us create a thrilling game experience.”

The Khamsins were purchased from Whitlock, now AVI-SPL. Ayrton is distributed exclusively in North America by ACT Lighting, Inc. www.actlighting.com

More information on Ayrton Khamsin-S, Mistral and the extensive portfolio of innovative Ayrton LED fixtures can be found on the Ayrton website