For the first time in its 64-year history, the 2020 Eurovision Song Contest (ESC) due to be staged in May in Rotterdam, the Netherlands, was cancelled due to the coronavirus pandemic, and all 41 qualifying countries have been invited back – same time and place – in 2021 with the same artists … who will be singing different songs!

No-one takes Eurovision more seriously than Sweden, one of the countries which has done consistently well since its 1958 debut, winning six times, most famously with Abba’s “Waterloo” and most recently in 2015! Since 1959, the Swedish entry each year has been chosen via an annual televised talent competition, known since 1967 as the ‘Melodifestivalen’, organised by public broadcasters Sveriges Television (SVT) and Sveriges Radio (SR). 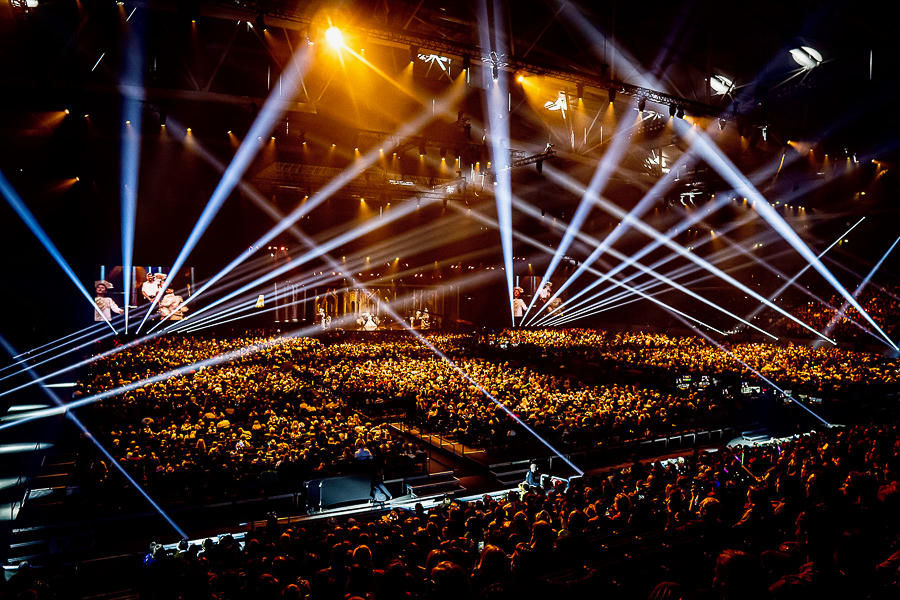 In 2002, the Melodifestivalen upped the ante further in terms of a selection event and started touring to six key cities around Sweden with a final in Stockholm, this year at the 65,000-capacity Friends Arena. The finale broadcast is among the most popular programmes on Swedish television.
Top Swedish LD Fredrik Jonsson of Eyebrow Designs has lit Melodifestivalen since 2002, capturing all the glamour, glitz, unashamed kitsch drama and disco-tastic moments!
This year he enlisted the help of 168 x Robe moving lights (upped to over 300 for the final show) including MegaPointes, Spiiders, LEDBeam 150s and six BMFL WashBeam follow spots running on four RoboSpot remote BaseStations.

Each year he imagines a new and original lighting design. Keeping the show looking fresh and relevant is one of the main challenges and a task he enjoys. This year, the producers wanted a large open stage look to set the scene, so they could use more and bigger props for the songs to give each an individual look.
Set designer Viktor Brattström opted for a huge projection surface as the backdrop, which was divided into three sections – in a geometric horseshoe shape, with content fed by eight laser projectors. So, the first starting point for lighting was to take this into consideration as the main visual element onstage in addition to lighting. 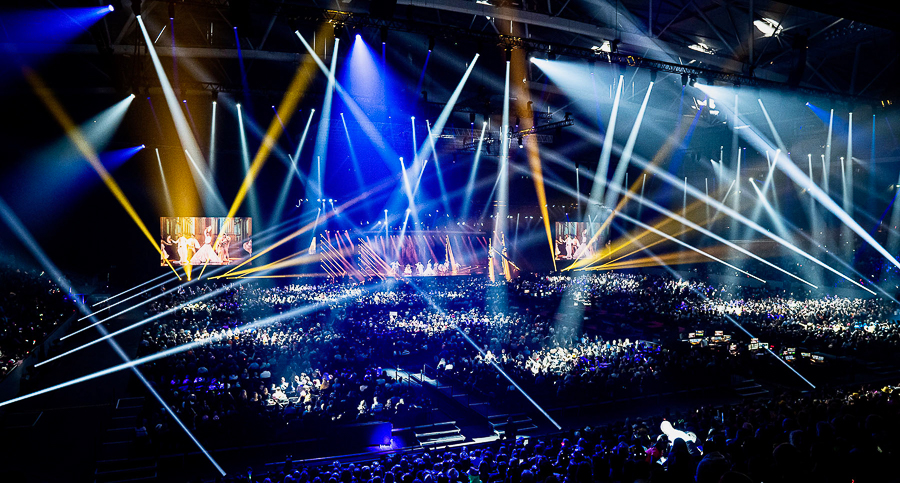 “The backdrop was grey / white with a strong linear texture, and rather moody and dark without projection, so I had to be careful with levels so not to kill or over-shine the projections,” he commented.

With the backdrop being so prominent, it could also become flat in close-ups shots with less depth-of-field for the cameras, so early on, he knew he needed lights in front that could move in and out providing more punch from the back when required, effectively adding a natural depth via lighting. Hence several moving ladders rigged with MegaPointes!
Out of a total of 10 ladders, four could move sideways on a Gerriets Cargo Track system, supplied by Creative Technology Northern Europe together with the lighting. This trick enabled the ladders to slide in and appear in front of the SR / SL backdrop upstage.
Each ladder was rigged with two Heavy Duty Runner blocks (rollers) as rigging points on the top pipe. These Runner Blocks were then attached to the Cargo Track beam, a set up that facilitated moving the ladders into view and choosing the best configuration for any song.

When projection needed to cover the whole backdrop, the ladders were slid out of view and stored – two ladders each side of stage – behind the diagonal projection screens, in an area called “the garage”. The Cargo Track beam reached well outside the “horseshoe” corners, creating the hidden storage position. Sometimes the ladders were positioned on stage in conjunction with the projection, so “masks” in the projection were mapped in the disguise servers for the different ladder positions, keeping them dark and out of the projected image. The ladders were slid in and out of position manually by the lighting crew during set changes and with five different positions for each ladder, there was plenty of versatility. “It was a neat, simple and effective solution.” Surrounding each section of backdrop was a tower / ladder filled with MegaPointes (64 in the touring system) plus a bunch of strobes.

Approximately 5 meters downstage was another arch in the same horseshoe shape, also with towers and lights arranged similarly to create a mid-stage performance area. Scattered around all the towers and in the roof beams were numerous Roe LED strips arranged in geometric patterns.

Two enormous DS / US staircases at 45-degree angles to the downstage arches further dissected and defined the main performance area, and inside the stairs pointing outwards onto stage were a bunch of LEDBeam 150s. The over-stage lighting rig followed the horseshoe shape of the stage, with 5 x US / DS trusses crammed as tightly as possible with spots, washes, and strobes, optimised to get the most coverage.

An extra upstage truss was dedicated to backlighting, including fixtures doing gobo-washes and the six BMFL WashBeams follow spots on the RoboSpot systems.
Robe’s Spiider LED wash beams in the roof were the main wash fixtures, the first time Fredrik has used them in this way, which was a great success. “It’s a great fixture – love the zoom range, and the LED ‘flower’ effect is a nice bonus,” he stated.
The diversity of the MegaPointes was ideal. They were all positioned on the 10 x towers and utilized for aerials and hi-impact effects as well as for some extra lighting ‘props’ in specific songs. Fredrik first used LEDBeam 150s on a dinner show last year where he needed something small and potent and immediately “fell in love with the tiny fixture!”
For Melodifestivalen 2020, the 42 x LEDBeam 150s on the touring system were rigged in the roof in groups of 4 to simulate ACLs. “Yes – I am THAT old, and I still LOVE those looks,” quips Fredrik, with the rest built into the set stairs to provide eye-candy, side light and more effects.

The BMFL WashBeams were they key lights, back lights and follow spots with a few extras rolled in when Fredrik needed to boost the sidelight. The intensity of two BMFL WashBeams was mapped in the disguise media server to sync perfectly with the video content during one song!

Fredrik always uses moving lights for key light now, and this year choose WashBeams for all the fixed positions to cover the show hosts and interval acts “for the pure quality, texture and coverage” of the fixture. “Everybody looks like they are standing in a follow spot on camera when in fact … they are in BMFL WashBeams!” The WashBeams were also great as side and key lights for the dancers, especially trimmed with the blade system and with a blurred breakup gobo slipped in to add more texture and make artists stand out even in crowded dance acts.
An additional 59 x BMFL WashBeams and 74 x BMFL Wash XFs joined the rig for the final broadcast … just to cover the audience and floor areas around the arena.

The lamp count was ramped up dramatically for the final, mainly due to the vastness of the Friends Arena (capped at 30,000 for this show), a soccer venue with a dizzily high trim height where fixtures at 28 meters had to be able to cover the audience with some serious punch in all colours.

“It was a pretty neat upgrade,” Fredrik comments raising the famous eyebrows! He often uses Robe products in his work, including previous Melodifestivalen tours and on the 2016 ESC Final in Stockholm, for which he was the lighting designer. (He also lit the 2013 final in Malmo.)

A standard practice when designing the initial Melodifestivalen rig drawings is to list alternatives for every position, but this year lighting supplier Creative Technology Northern Europe had a lot of Robe to hand, so that tended to be his first choice. Last year, he had tried using smaller numbers of BMFL WashBeams and was suitably impressed by the optics to switch other fixtures out for these this year, as well as using them for the six onstage follow spots.

“The quality and texture of the WashBeam light is way more refined than a BMFL Blade or Spot simply because the lens is so much bigger – the more glass, the more beam quality!” When he hit on the idea of the structural ladders / towers with lights and wanted to move some of these sideways, a weight issue came into play and that sent him in a MegaPointe direction.
“As I knew the MegaPointe could deliver all the effects with less weight, it got the job!”
The four RoboSpot systems were positioned backstage and controlled the six BMFL WashBeams on the back truss. “It is a trick employed last year to cover different sweet spots / performance areas from two different angles,” he elucidated.

This year, they had two different positions upstage and downstage, so the follow spot rigged at the right angle for key lighting at the “standard” downstage sweet spot would not work for a position upstage as it would hit the backdrop and disrupt the projections. So, an extra pair of front spots were rigged closer to the stage edge controlled by the same RoboSpot system. The BaseStation controlling the downstage stage right follow spot also controlled the upstage stage right one, and as Fredrik had master control via one of the lighting consoles, he could switch between them or use both simultaneously and seamlessly during the songs, depending on where the artists moved! “Basically, you get two different follow spot positions for the price of one operator!”

All the follow spot operators had to do was follow the talent and turn their intensity to full, while the lighting console took care of the rest. “With all the songs being timecoded, we could do some really clever cues,” included Fredrik. The show lighting was programmed and run on four grandMA consoles.