French people refer to her as the Iron Lady, but with tenderness and pride. French leading production company Magnum chose 60 Elation Proteus Hybrids to give life to an extraordinary light-show with double helix design to celebrate the Eiffel Tower 130th Anniversary. 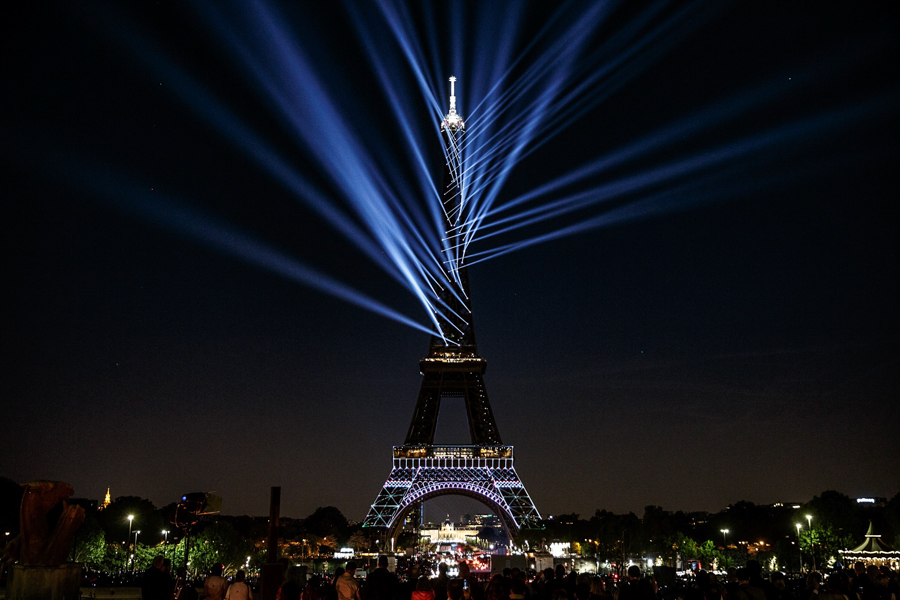 The Eiffel Tower celebrated its 130th Anniversary on May 15th and marked the occasion with a spectacular son et lumière atop the Iron Lady with 60 Elation Proteus Hybrid™ luminaires used in an extraordinary double helix design. The weatherproof Proteus moving heads played an integral part in the sound and light show. 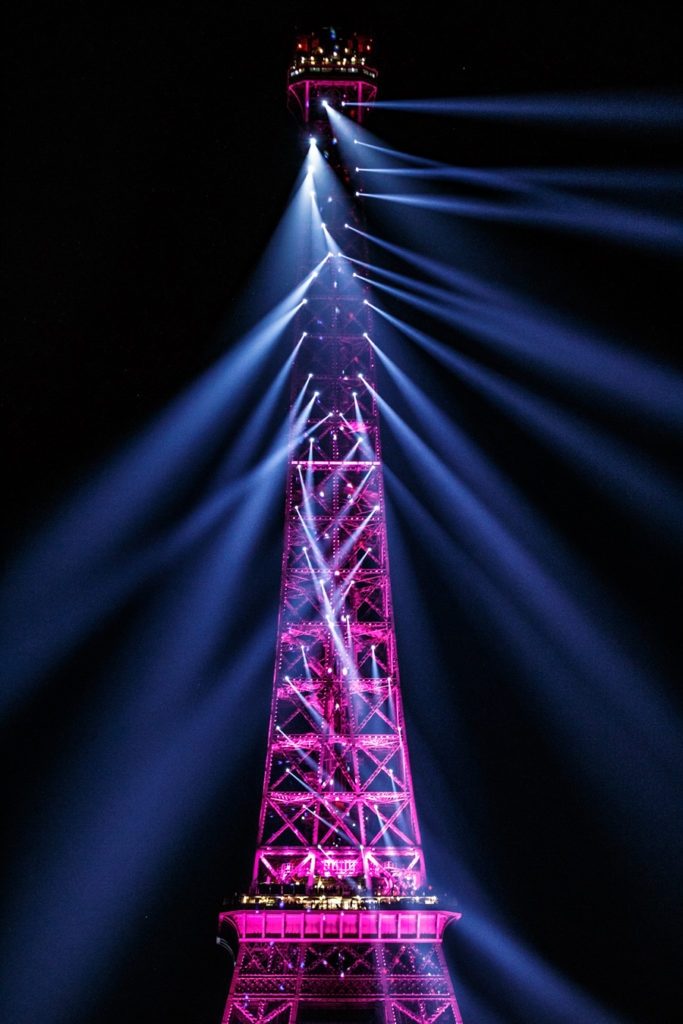 These fixtures were supplied for the event by technical solutions provider Magnum, who has been involved in over 95% of Eiffel Tower events since 2004. Magnum’s role on the 130th Anniversary project was to interact between the artistic ideas of renowned set designer Bruno Seillier and the Eiffel Tower’s technical director.
Designed by Bruno Seillier and programmed by Magnum’s Clément Lelevé, the custom light show portrayed a series of moments in history including Gustave Eiffel’s design and construction of the tower, special broadcasts France got to experience due to the tower’s height, the two World Wars, and other notable events in history including the recent fire at Notre-Dame Cathedral.

“For this great and historical event Bruno Seillier wanted to feature the tower as the ‘DNA of Paris’ so the 60 Proteus Hybrids were positioned accordingly on the top section of the tower,” stated Magnum head Jérôme Chupin.
A double helix design of Proteus fixtures, mounted above the second platform, lent itself to a beautiful symmetry of design, sending powerful beams of light thousands of feet into the Parisian night sky and allowing for unprecedented visual effects. The Proteus fixtures worked with other beam effects (in domes) located at the platform positions. 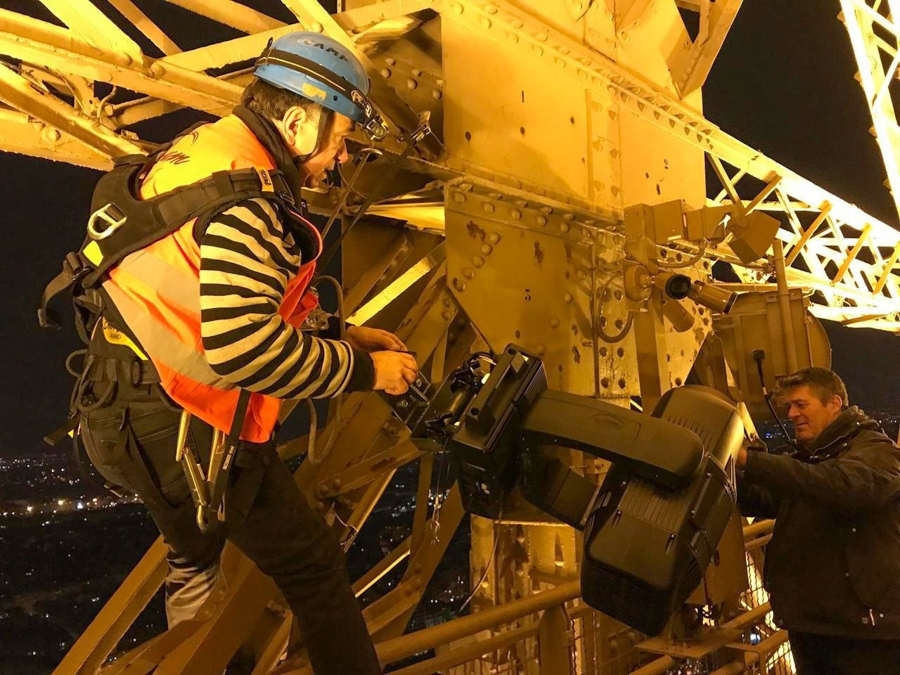 Climbing technicians akin to mountaineers spent three nights on the Eiffel Tower installing the multi-functional IP65 arc-source lights, an experience other technicians around the world have become familiar with as the award-winning Proteus has been used on several high-profile light spectaculars including New Year’s Eve light shows on the Burj Khalifa in Dubai and the Space Needle in Seattle.

Read more about this latter installation in this SoundLightUp article.

“To this day the Proteus Hybrid is the only fixture gathering exceptional lighting qualities with the possibility to execute them in all environments,” Jérôme said of the powerful hybrid moving head. “Elation’s previous experience at the Burj Khalifa tower in Dubai was instrumental in the decision to give the Eiffel Tower’s Technical Services Department peace of mind and give the okay to hang the Proteus Hybrid fixtures.” 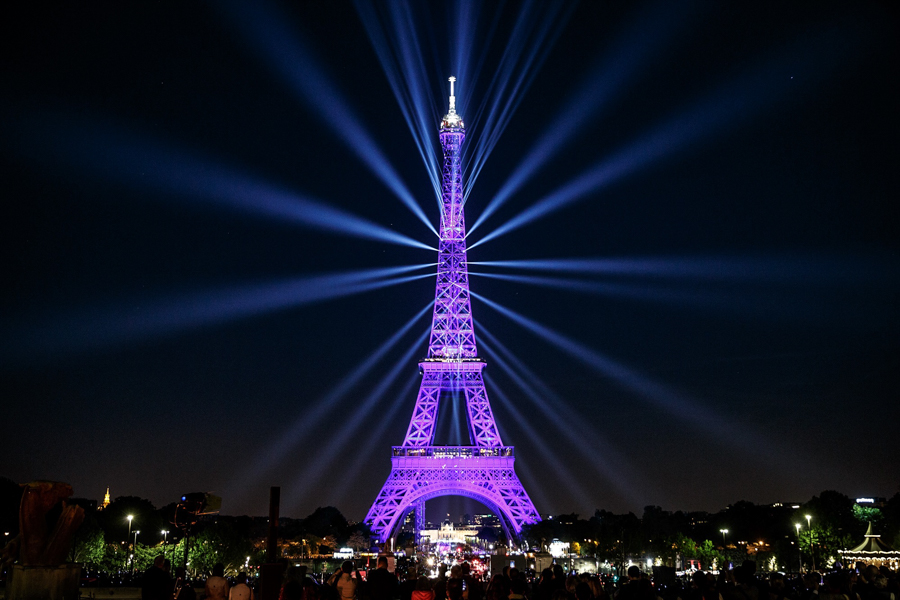 The 12-minute Anniversary light show debuted on May 15th following a free concert by popular French singer Jeanne Added and played again the nights of May 16th and 17th, three times each night.
The symbol of Paris and a world treasure, the Eiffel Tower is a rare attraction in its own right but is especially magnificent when dressed in a custom light show as Jérôme exclaims. 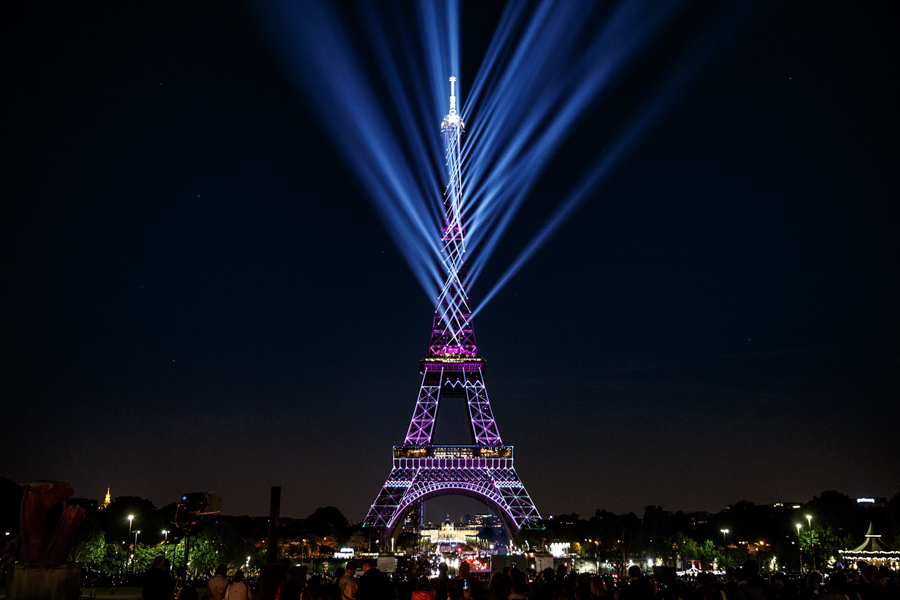 “The show’s impact was ‘extraordinaire’! For three days, three shows per day, it gathered a sea of people from Place de Trocadéro all the way to the Pont d’Iéna (famous bridge across the Seine river nearby, Ed.) and was simply amazing to see.”